ABSTRACT: Elaeocarpus ganitrus Roxb. is reported to exhibit multifarious pharmacological activities. However no scientific study has been conducted to evaluate antiatherosclerotic /lipid lowering activity of E. ganitrus Roxb. The present study was designed to investigate the antihyperlipidaemic and antioxidant activity of 70% ethanolic extract of E. ganitrus seed (EGEE) in cholesterol fed hyperlipidaemic rabbits. The EGEE was administered at a dose level of 250 and 500 mg/kg/day (p.o.) for 60 days to hyperlipidaemic rabbits. Lipid profile in serum and antioxidant parameters in tissues (Liver, Heart and Aorta) were determined. The statistical analysis was carried out using one way ANOVA followed by Tukey’s multiple comparison tests. EGEE showed a decrease in the levels of serum total cholesterol, triglycerides, phospholipids, LDL, VLDL (P ≤ 0.01, ≤ 0.001) in a dose dependant manner in treated animals.  HDL ratio improved profoundly as well as marked decline was noticed in atherogenic index after administration with EGEE. A considerable decrease in lipid per oxidation and a significant elevation in Glutathione, Catalase and SOD levels (P ≤ 0.01, ≤ 0.001) were observed in EGEE treated rabbits. The overall experimental results suggests that the biologically active phytoconstituents such as phytosterols, fats, alkaloids, flavonoids, carbohydrates, proteins and tannins present in the EGEE may be responsible for the significant hypolipidaemic as well as antioxidant activity, signifying the potential protective role in coronary heart disease.

INTRODUCTION: In the face of unremitting advances in therapeutic interventional and surgical therapies for the treatment of atherosclerotic coronary disease the later remains the principal killer in the western and the developing world. 1 Dyslipidaemia and resultant atherosclerosis are believed to stem from the imbalance of the lipid metabolites in the affected organism.

The World Health Organization report emphasizes that the cardio vascular diseases to be the leading cause of death and disability in India by 2020. It is usually established that oxidative stress is strongly related to atherogenesis. 3 An antioxidant which inhibits oxidation of LDL should be effective for suppressing atherosclerosis. 4

Elaeocarpus ganitrus Roxb. belongs to family Elaeocarpaceae is a large evergreen broad-leaved tree. In Hindi it is recognized as Rudraksha 5 is prevalent for its fascinating fruit stones and medicinal properties.

The widespread investigation of literature exposed that E. ganitrus Roxb. is an imperative basis of various pharmacologically and medicinally significant chemicals, such as indispensable triterpenes, tannins like geraniin and 3, 4, 5-trimethoxy geraniin, indolizilidine alkaloids grandisines, rudrakine and flavnoids quercitin.

Furthermore it is noted to have myriad pharmacological activities that involve anti-inflammatory, 7 analgesic, 8 hypoglycemic, 9 antidepressant, 10 antiasthmatic, 11 sedative, 8 antihypertensive, 12 antiulcerogenic, 11 anticonvulsant, 13 and antimicrobial. 14 As per our literature survey, no scientific study has been conducted to evaluate antiatherosclerotic/ cholesterol lowering activity of E. ganitrus Roxb. With this background information, the present study is undertaken to screen E. ganitrus Roxb. for its ability to decrease lipid levels as well as antioxidant activity in hyperlipidaemic rabbits.

Collection of plant material: Authentic seeds of E. ganitrus were obtained from Jayoti Vidyapeeth Women’s University, Jaipur and authenticated by authority of Department of Botany, University of Rajasthan, Jaipur. A voucher specimen number (RUBL21180) was submitted at University herbarium department for future reference.

Extraction of plant material: The seeds were coarsely powdered and extracted with 70% ethanol for 48 hrs, by soxhlet extraction method. Then ethanol was filtered and then separated under reduced pressure to obtain solid mass in a rotary evaporator and this was stored in a desiccator. Ethanolic extract of E. ganitrus seed contains indolizidine types of alkaloids, flavanoids, tannins, carbohydrate and proteins. 15 Some dominant phytoconstituents in ethanolic extract of E. ganitrus which possess hypolipidaemic and antioxidant activity are depicted as: 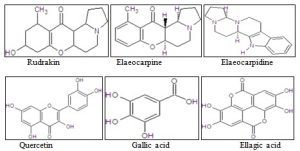 Animal model: New Zealand white male rabbits weighing 1.50-2.0 kg were used in the study. The animals were acclimatized for 10 days before being used for the experiments. The animals were grouped (5 rabbits in each group) and housed in polypropylene cages at constant temperature and also maintained under a standard diet (Ashirwad Industrial Ltd., Punjab) and green leafy vegetables and water ad libitum. Experimental dose was administered to rabbits orally via gavage. The experimental protocol was approved by

Institutional Animal Ethical Committee (IAEC) and was executed according to the guidelines of Committee for the Purpose of Control and Supervision on Experiments on Animals (CPCSEA), India.

Acute Toxicity Study: The acute toxicity of the EGEE was determined using Albino mice weighing 20-25 gm. Animals were maintained on normal diet and water prior to and during the course of experiment. Fixed dose (OECD Guideline No. 423) method of CPCSEA was adopted for the toxicity studies. EGEE was nontoxic and caused no mortality up to 5g/Kg orally in mice. Therefore, the LD50 value of EGEE is >5g/Kg of body weight.

The rabbits were divided into following groups:

Group IV a : Cholesterol feeding for 60 days then treated with 250 mg/Kg ethanolic extract of EGEE for next 60 days.

Group IV b: Cholesterol feeding for 60 days then treated with 500mg/Kg ethanolic extract of EGEE for next 60 days.

Cholesterol feeding: 500 mg cholesterol/kg. b. wt./rabbit/day in 5ml coconut oil Animal were sacrificed after completion of treatment, blood and tissue were taken out for biological examinations.

Collection of blood: On the 61st day or 121st day of respective treatment blood was collected by cardiac puncture, under mild ether anaesthesia and the serum was separated by centrifugation after 30 minutes and stored at -20°C for biochemical analysis. 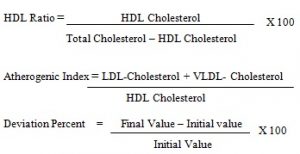 RESULTS AND DISCUSSION: Findings of the current study suggested that administration with EGEE significantly attenuated the elevated total cholesterol, triglyceride, phospholipid, lipoprotein cholesterol (HDL, LDL and VLDL) concentrations in cholesterol induced hyperlipidaemic rabbits. A marked reduction was also observed in atherogenic index and the HDL ratio improved significantly after supplementation with seed extract at a dose level of 250 and 500 mg/kg b.wt/day.

The strong presence of flavonoids in extract may contribute to antihypercholesterolemic effect as they decrease the levels of 3-hydroxy-3-methylglutaryl coenzyme A (HMG CoA) and decrease in apo- B secretion in hepatocytes. 24, 25

Cholesterol feeding elevates serum triglyceride levels essentially by preventing its uptake and clearance by inhibiting catabolising enzymes like lipoprotein lipase (LPL) and lecithin cholesterol acetyl transferase (LCAT). 26 EGEE significantly suppresses the elevated blood concentration of TGs through increased expression and activity of lipoprotein lipase (LPL) and to decrease hepatic synthesis and secretion of triglycerides. 27 It could be due to inhibition of lipolysis so that fatty acid do not get converted into triglyceride. 28

In the present study, there was elevation in serum LDL level in response to cholesterol feeding as compare to normal control group. (Table 1) In contrast, as depicted in Table 1 the EGEE extract produced a significant decrease (P ≤ 0.001) in the levels of LDL-cholesterol (i.e. reduction was -71.24 % in 250 mg./kg.b.wt./day and -80.73% in 500 mg./kg.b.wt./day) when compared with hyperlipid- aemic rabbits (Group IIb). LDL level was brought down to only -23.94% in no treatment group (Group III). A significant fall (P ≤ 0.001) was noticed after oral administration of EGEE at various doses (250mg and 500mg/kg.b.wt/day) when compared to no treatment hyperlipidaemic rabbits. One of the key steps in the development of atherosclerosis is oxidative modification of LDL. The LDL- cholesterol lowering could result from a reduced LDL- synthesis and/ or an increased LDL metabolism. 30

Cholesterol feeding resulted in a rise in serum VLDL-Cholesterol levels in group IIa and IIb when compared to control group. (Table 1) On the other hand, as shown in Table 1 the induction of hyperlipidaemia in rabbits followed by treatment with plant extract at both the dose level i.e. 250 and 500 mg./kg.b.wt./day caused a significant reduction (P ≤0.001) in the serum levels of VLDL-cholesterol -51.75% and -54.64% respectively whereas no treatment group brought down it only -22.72% in comparison to hyperlipidaemic rabbits (120 days). Further, a significant (P ≤ 0.001) decline in VLDL level was observed when group IVa and IVb was compared to group III animals. Oral administration of EGEE brought down the VLDL cholesterol levels markedly. The reduction might be due to an increased uptake by extrahepatic tissues as well as by increasing the fractional catabolic rate of LDL cholesterol and by increasing the liver LDL receptors activity. 31

Further HDL ratio significantly improved in a dose dependent manner after administration with EGEE as indicated in Table 1. The atherogenic index (AI) which is the measure of the extent of atherosclerotic lesions based on serum lipids is determined in all five groups. An ameliorative action of plant extract on atherogenic index was observed in both EGEE extract treated groups in a dose dependant manner.

TABLE 1: EFFECT OF ETHANOLIC EXTRACT OF E. GANITRUS ON SERUM BIOCHEMISTRY IN RABBIT

The ratio of LDL-C to HDL-C is also a protective indicator of cardio vascular disease incidence. The cholesterol induction produced a significant increase of this marker. The administration of EGEE provides a beneficial action on rabbit lipid metabolism with regard to the reduction of AI. Again, the administration of EGEE significantly improved the HDL ratio showing the beneficial effect of this plant in preventing atherosclerosis incidence. For analyzing lipid peroxidation, MDA levels were measured in liver, heart and aorta homogenates. A significant rise (P ≤ 0.001) in MDA was observed in the hyperlipidaemic rabbits in comparison with the control. Moreover, lipid peroxidation was significantly reduced (P ≤ 0.01

and P ≤ 0.001) as depicted by the lower levels of MDA in liver, heart and aorta after oral administration of EGEE in a dose-dependent manner when compared with hyperlipidaemic rabbits (Fig. 1). This indicates that EGEE extract react with peroxyl radicals including the inhibition of lipid peroxidation chain propagation. 32

The level of GSH was lower in the animals fed with cholesterol when compared to control ones in all the three tissues. A significant elevation (P ≤ 0.001 and P ≤ 0.01) was observed in GSH content of all the three organs when treated with EGEE at the dose level of 250 and 500 mg/kg. b. wt./day (Fig. 2).

It is possible that extract might have reduced the extent of oxidative stress, leading to lesser GSH degradation or increase in the biosynthesis of GSH. 33, 34 The CAT and SOD activity appeared to be lower in the hypercholesterolaemic groups in comparison to control group in all the three organs. In contrast statistically significant elevation (P ≤ 0.01 and P ≤ 0.001) was observed in catalase (Fig. 3) as well as SOD activity (Fig.4) of liver, heart and aorta in EGEE administered rabbits. 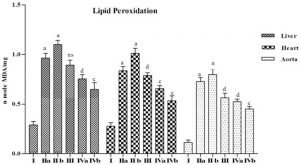 FIG. 1: EFFECT OF ETHANOLIC EXTRACT OF E.GANITRUS ON LIPID PEROXIDATION IN RABBITS 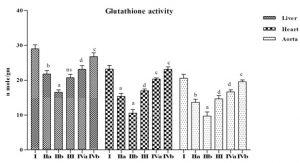 FIG.  2: EFFECT OF ETHANOLIC EXTRACT OF E. GANITRUS ON GLUTATHIONE ACTIVITY IN RABBITS 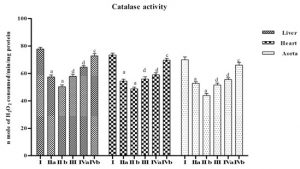 FIG. 3: EFFECT OF ETHANOLIC EXTRACT OF E.GANITRUS ON CATALASE ACTIVITY IN RABBITS 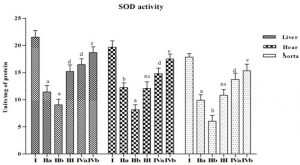 FIG. 4: EFFECT OF ETHANOLIC EXTRACT OF E. GANITRUS ON SOD ACTIVITY IN RABBITS

EGEE treated hyperlipidaemic rabbits had considerably elevated levels of SOD and CAT, reversing the ill effects of hyperlipidaemia. It is well known that flavonoids and polyphenols are natural antioxidants but have also been reported to significantly increase SOD and CAT activities. 35, 36 Total phenolic content in E.ganitrus was detected to be 56.79±1.6 mg gallic acid equivalents/g of dry material. Total flavonoids in E. ganitrus were detected to be 18.58± 0.3 mg rutin equivalents/g of dry material. 37 These findings recommend that the antioxidant capacity of EGEE is by virtue of phenolics and flavonoid components.

Berberine (BBR), an alkaloid isolated from the Chinese herb huanglian, upregulates hepatic LDLR expression by extending the half-life of LDLR mRNA without affecting gene transcription. 40 It is possible that the presence of alkaloids like:

In accordance with these results, it may be confirmed that due to the presence of biologically active phytoconstituents such as alkaloids, flavanoids and tannins in the ethanolic extract, may demonstrates the multitarget, multicomponent features for regulating lipid metabolism. 45

In conclusion, it can be said that the ethanolic extract of Elaeocarpus ganitrus seed exhibited a significant cardioprotective as well as antioxidant activity in rabbits. To elucidate the precise mechanism of action and expression studies related to lipid metabolism of specific biological moiety, further processing of ethanolic fraction of E. ganitrus is required to establish the efficacy of the EGEE as a hypolipidaemic drug.