ABSTRACT:The phytochemical analysis of the medicinal plant Kalonchoe pinnata was carried out to evaluate the antioxidant potential. Alcoholic extracts of the leaves was subjected to in vitro antioxidant activity screening models such as inhibition of lipid peroxidation, nitric oxide ,superoxide radical and hydroxyl radical scavenging activity. Ascorbic acid was used as the standard for superoxide anion radical scavenging activities. Butylated Hydroxy Toluene (BHT) is used as standard for anti-lipid peroxidation activity and for nitric oxide scavenging activity Gallic acid is used as a standard. In all the models studied, the extracts showed potent antioxidant activity, thereby augmenting it into the present day system of medicine.

However, majority of plants have not yet been screen for such activity 5. So, in order to contribute further to the knowledge of Indian traditional plants, our present study is forced on Kalanchoe pinnata (Lam) to determine its antioxidant and free radical scavenging properties.

Plant: Kalanchoe  pinnatacollected from south part of India was taken for the study. The collected leaves  were washed thoroughly with tap water followed with distilled water for the removal of dust and soil particles. The leaves were shade dried and used for extraction.

Preparation of Plant Extract: 78g of kalanchoe pinnata leaves were first defatted using petroleum ether and extracted with 700ml of 80% methoal using Soxhlet apparatus. The extraction was carried out for 8 hours and the extract was thereafter concentrated by evaporation in a rota-vaccum, the work was carried out at the Department of Chemistry, PRIST University,Vallam, Thanjavur, Tamil Nadu. 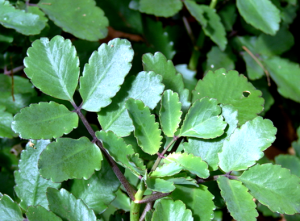 Reducing Power Assay: Different concentration of extract was mixed with 2.5ml of 1% potassium ferricyanide and 2.5ml of phosphate buffer (pH 6.6). The mixture was incubated at 50 °C for 20 minutes. Trichloroacetic acid (10%) was added to it and centrifuged at 3000 rpm for 10 minutes. Then the supernatant was taken, 2.5ml of water and FeCl3(0.1%) is added to it. The absorbance was measured at 700nm.

In-vitro Anti- Lipid Peroxidation Assay: Lipid peroxidation was assayed according to Prasanth kumar et al 6. Freshly excised goat liver was homogenized in cold Tris HCl buffer (pH 7.0) and centrifuged at 3000 rpm for 10 minutes to get clear supernatant. The reaction mixture containing 0.5ml of liver homogenate, Kalanchoe pinnata extract at different concentration, 0.15ml KCl, ferrous ion (0.16M) and 6mM ascorbic acid incubated for 1 hour at 37°C. 10% TCA was added and centrifuged at 3000 rpm for 20 minutes at 4°C. Supernatant was removed at 1ml TAB was added (0.8%) followed by heating at 90 °C for 20 minutes in water bath. Absorbance was measured at 532nm and the percentage inhibition was calculated using the formula, In-vitro anti lipid peroxidation scavenging effect = [(A0-A1/A0)X100], where A0 was the absorbance of the control reaction and A1 the absorbance in the presence of the sample. The extract concentration providing 50% inhibition (EC50) was calculated was obtained by interpolation from linear regression analysis.

Nitric Oxide Svcavenging Avtivity: 10mM sodium nitroprusside was mixed with Kalanchoe pinnata in different concentrations. The mixture was incubated at 25°C for 150 minutes. To 1ml of incubated solution, 1ml of Griess reagent was added. Absorbance was calculated using the formula, Nitric oxide scavenging effect =[(A0-A1/A0)X100], where A0 was the absorbance of the control reaction and A1 the absorbance in the presence of the sample. The extract concentration providing 50% inhibition (EC50) was calculated was obtained by interpolation from linear regression analysis.Gallic acid was used as the reference compound.

Superoxide Radical Scavenging Activity: Superoxide anion scavenging activity of the Kalanchoe pinnata extract was determined by the method of Nishmiki et al 7. The reaction mixture contain1ml of  NBT ( in phosphate buffer, pH 7.4), 1ml of NADH solution and varying volumes of Kalanchoe pinnata extract. The reaction is initiated by the addition of 100µl PMS (phenazine metho sulfate). The reaction mixture was incubated  at 30°C for 15  minutes after which absorbance was measured at 560nm.Ascorbic acid will be used as reference compounds. Percentage inhibition was calculated by comparing the results of control and the test sample.

Hydroxyl Radical Scavenging Activity: Hydroxyl radical scavenging activity was measured comparing mannitol and plant extract for hydroxyl radical generated by Fe3+-ascorbate-EDTA-H2O2  system (Fentons’s reaction) using the method of Kunchandy Rao 8. The reaction mixture containing 100µl 2-deoxy-2-ribose(23mM in 28mM phosphate buffer, pH 7.4), 500µl of each fraction of the plant extract or the reference compound in phosphate buffer  (28mM, pH 7.4), 200µl 1.04mM EDTA and 200µm FeCl3 (1:1 v/v), 100µl 1.0mM H2O2  and 100 µl 1.0mm ascorbicacid ,was incubated at 37oC for an hour. The 1ml of the 1% thiobarbituric acid and 1.0ml of 2.8% trichloro acetic acid were added and incubated at 100oC for 20 minutes.

After cooling, absorbance was measured using spectrometer at 532nm, against a control preparation containing deoxyribose and buffer. Reactions were carried in triplicate. Percentage inhibition was determined by comparing the results of the test and control samples.

Determination of the Antioxidant Components:

Phenolics: Total phenolic compounds were determined according to Bray and Thorpe method 9.To Kalanchoe pinnata extract, 20% Na2CO3 was added and shaken vigorously. After 2 minutes 0.2ml of 1:1 dilutes Folin’s reagent was added with constant shaking. The colour was allowed to develop for half an hour and absorbance at 750nm was taken and expressed as mg/g extract, by evaporation with calibration curve prepared from the reference solution and gallic acid.

Flavanoids: 0.5ml of different solvent extract of Kalanchoe pinnata was mixed with 95% methanol, 10% aluminium chloride, 1M potassium acetate distilled water. After incubation at room temperature for 30 minutes, the absorbance was measured at 415 nm along with standard quercetin and blank. The concentration obtained by comparing with the calibration curve prepared from a reference solution containing quercetin.

β-carotene & Lycopene Content: The dried extract was vigorously shaken with 10ml acetone-hexane mixture (4:6) for 1 minute and was filtered through Whatman No.4 filter paper. The absorbance was measured at 453nm, 505nm, 663nm. Contents of β-carotene and lycopene were calculated according to the following equations:

RESULTS AND DISCUSSIONS: Table 1 indicates the results of quantitative estimation of Phenolics, Flavonoids, Lycopenes and Carotenoids.

Assay of Reducing Power: The reducing capacity of a compound may serve as a significant indicator of its potential antioxidant activity. However, the activities of antioxidants have been attributed to various mechanisms such as prevention of chain initiation, decomposition of peroxides, reducing capacity and radical scavenging. As shown in figure 2, the reducing power of the plant extract was compared with the standard ascorbic acid and found to be dose-dependent. 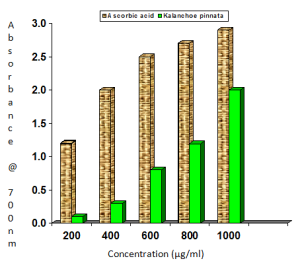 In- vitro Anti Lipid Peroxidation Assay: Lipid peroxidation refers to the oxidative degradation of lipids. It is the process in which free radicals “steal” electrons from the lipids in cell membranes, resulting in cell damage. This process proceeds by a free radical chain reaction mechanism. It most often affects poly unsaturated fatty acids. If not terminated fast enough, there will be damage to the cell membrane, which consists mainly of lipids. In addition, end-products of lipid peroxidation may be mutagenic and carcinogenic. Figure 3 shows comparison of % inhibition between reference standard Butylated hydroxyl tolune (BHT) And Kalanchoe pinnata.

Nitric oxide Scavenging Effect: It is well known that nitric oxide has an important role in various inflammatory processes. Sustained levels of production of this radical are directly toxic to tissues and contribute to the vascular collapse associated with septic shock, whereas chronic expression of nitric oxide radical is associated with carcinomas and inflammatory conditions including diabetes, multiple sclerosis, arthritis and ulcerative colitis. 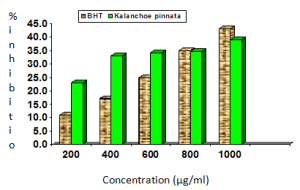 The toxicity of nitric oxide (NO) increases greatly when it reacts with superoxide radical radical, forming the highly reactive peroxynitrite anion (ONOO-). The nitric oxide generated from the sodium nitroprusside reacts with oxygen to form nitrite. The extract inhibits nitrite formation by directly competing with oxygen in the reaction with nitric oxide. The present study proved that the extract studied has comparable nitric oxide scavenging activity with the standard gallic acid. Figure 4 shows the nitric acid scavenging activity of Kalanchoe pinnata in comparison with gallic acid standard reference. 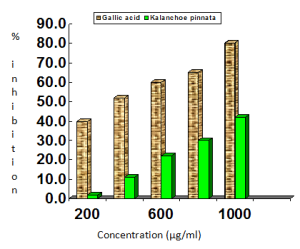 Superoxide Anion Radical Scavenging Activity: Super oxide anion is also very harmful to cellular components. Robok and Glyglewski 10 reported that flavanoids are effective antioxidants mainly because they scavenge superoxide anions. As shown in figure 5, the superoxide radical scavenging activities of the plant extract and the reference compound are increased markedly with increasing concentration. The results suggest that the plant extract is a more potent scavenger of superoxide radical than the standard ascorbic acid. 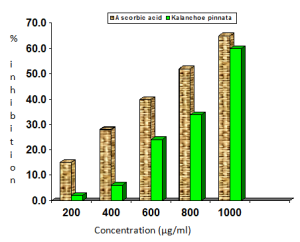 Hydroxyl Radical Scavenging Activity: Hydroxyl radicals are the major active oxygen species causing lipid peroxidation and enormous biological damage. The IC50 value indicates that the plant extract is a better hydroxyl scavenger than the standard mannitol. Significant activity in scavenging of hydroxyl radicals with an IC50 value of 4.64 µg/ml compared to an IC50 of 5.33 µg/ml of mannitol. 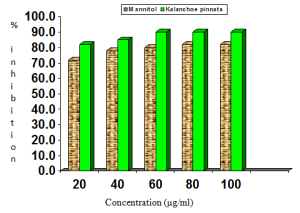 CONCLUSION: From the in-vitro phytochemical investigation of Kalanchoe pinnata   extract the following conclusions are arrived:

Alcoholic extract of Kalanchoe pinnata   showed phytochemicals such as Total phenolics, Flavonoids, Lycophenes and β – Carotenes. The dried extract of Kalanchoe pinnata showed considerable inhibiting avcivity of in-vitro lipid peroxidation. The hydroxyl radicals generated in-vitro was scavenged effectively by the administration of extract in a dose dependent manner. Superoxide radicals produced in the in-vitro medium were dispersed by the extract in a dose dependent manner. Total antioxidant property of the extract was significant compared to controls. It would be appropriate to carryout HPLC analysis and chromatographic separation of active compounds in this medicinal plant and study their exact medicinal property.