ABSTRACT: Introduction: Global warming is one of the major issues in the current scenario. Heat stress is known to affect both physical and mental task. Imbalance in the maintenance of temperature leads to oxidative stress and damage to the body systems. Several studies have been documented on various stressors and its impact on antioxidant status. Aim: The present study was done to evaluate the antioxidant status in rats after acute heat stress. Methodology: Twelve male Swiss albino rats were randomly divided into two groups, control group, and experimental group. The experimental group of rats was exposed to acute heat stress at 38 ºC for four hours for a single day. Blood from the jugular vein was collected for the estimation of antioxidant statuses like LPO and SOD, GPx, CAT, vitamin C, and vitamin E in rats. Results: After exposure to acute heat stress, there was a significant and progressive increase (P<0.05) in LPO levels of the experimental group than compared to controls. Superoxide dismutase (SOD), Glutathione peroxidase (GPx) Catalase, vitamin C, and vitamin E showed a significant decrease (P<0.05) in the experimental group compared to the control group. The findings of the present study suggest that oxidative stress increases progressively, and the structural damage to the tissues may be due to oxidative stress.

INTRODUCTION: The major part of the country is characterized as a humid topic and is subjected to extended periods of high ambient temperature 1. Stressful situations mainly induce physiological and behavioral changes in an organism to maintain the homeostasis 2. Acute stress exposure has a detrimental effect on several cell functions. Global warming is one of the major issue in the current scenario.

The thermal environment is one of the natural conditions where all living beings require performing their activities 3.

A major neuroendocrine mechanism in a stress reaction is the activation of the hypothalamic–pituitary–adrenal (HPA) axis, results in an increase of corticotrophin (ACTH) and subsequent rise in glucocorticoids 4, 5. Heat stress is known to affect both physical and mental task 6. Imbalance in the maintenance of temperature leads to oxidative stress and damage to the body systems. Stress is a non- specific response of the body to any demand and stressor as the environmental stimulus that provokes the stress response 7. In heat stress, several physiological and behavioral responses vary in intensity and duration about the animal genetic makeup and environmental factor 8. Exaggerated responses to stress appear to be related to a wide range of physiological and psychological dysfunctions 9. Exposure to stress situations can stimulate numerous pathways, leading to increased production of oxygen free radicals. Several studies have been documented on various stressors and its impact on antioxidant status.

The immunomodulatory effects of heat stress have been investigated in previous studies. This study tested that hypothesis of acute heat stress brings about changes in antioxidant estimation and a significant change in the free radical production.

Methodology: Adult male Wistar rats (12) weighing 150-180g were taken for this study. The institutional animal ethical committee approval was obtained. The rats were maintained (3rats/cage) under 12h: 12h light and dark cycle and were provided with food and water ad libitum. The rats were divided into 2 groups, (a) Control group, (6), and (b) acute heat stress group (6). The control group was kept in a home cage without any disturbance, whereas rats in the stress group were exposed to biological oxygen demand incubator at 38ºC for the duration of four hours for a single day between 08.00AM to12.00AM 10. After heat stress, blood samples were collected from the jugular vein for estimating the antioxidant status of animals. The enzymatic and non enzymatic activity like Lipid peroxidase (LPO), Superoxide dismutase (SOD), Glutathione peroxidase (GPx), Vitamin C, Vitamin E.

PROCEDURE FOR ESTIMATING THE ANTIOXIDANT LEVELS:

Lipid Peroxidase (LPO): Malondialdehyde (MDA) a secondary product of LPO reacts with Thiobarbituric acid to form a pink chromogen which was measured spectrophotometrically at 532nm and expressed as n moles of MDA formed/min/mg/protein in tissue samples.

Superoxide Dismutase (SOD): Pyrogallol auto oxidizes rapidly in aqueous solution at a faster rate with higher pH (8.0) to produce several intermediate products. The inhibition of auto-oxidation brought about by the addition of enzyme is evaluated at an early stage as an increase in absorbance at 420nm and expressed as units/min/ mg of tissue protein.

Glutathione Peroxidase (GPx): GSH is converted to GSSG in the presence of GPx and the color developed was read at 412 nm using Spectrophotometer and expressed as glutathione oxidized/min/mg/protein.

Catalase: Dichromate in acetic acid is reduced to chromic acetate when heated in the presence of H2O2, resulting in the formation of per chromic acid as an unstable intermediate. The Chromic acetate measured using Spectrophotometer at 570 nm and expressed as µmoles of H2O2 utilized/min/mg/ protein.

Vitamin C: Ascorbic acid is oxidized by Cu to form dehydroascorbic acid and diketogluconic acid when with DNPH forms derivative bis 2, 4, dinitrophenylhydrazone when combined with H2SO4 forms a yellowish orange produced which was measured at 520 nm and expressed as µg/mg protein.

Vitamin E: Tocopherol in liver tissue extracted into Xylene and its content was measured using Emmerich- Eegel reaction. This reaction is based on the reduction of Fe3+ to Fe2+ in the presence of α, α1 dipyridyl forming red color and absorbance read at 530 nm and expressed as µg/mg/protein.

RESULTS: All data were analyzed and were expressed as the mean ± SE and by using students ‘t’ test was used to test the significant difference between the mean values of different groups. 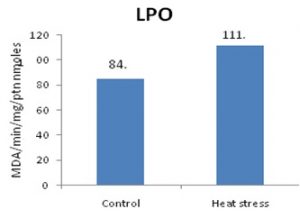 FIG. 1: COMPARISON OF LPO LEVELS IN CONTROL AND ACUTE HEAT STRESS RATS. There was a significant increase in LPO activity after heat stress (P<0.05) compared to controls.

Values are a mean ±standard error. Significance fixed at P<0.05*. 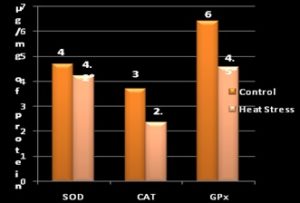 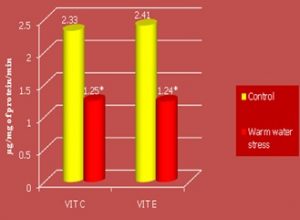 DISCUSSION: There are several physiological responses that are reliably correlated with the experience of stress and stressful physical stimuli. This repertoire of responses plays an important role in preparing individuals to cope with putative internal or external stimuli that might threaten their well being or survival. Threats to homeostasis are met by acute physiological responses that are quick and engage two main biological systems.

The first is the sympathetic division of the autonomic nervous system, which controls neural and hormonal processes. Acute psychological stressors generally activate the sympathetic adrenomedullary system. The release of the adrenomedullary catecholamine hormone, adrenaline, is crucial in the preparation of an individual’s “fight or flight” reaction 11. Additional sympathetic neural activation via noradrenaline release is responsible for a variety of peripheral responses associated with stressful situations, including, but not limited to, increases in heart rate (HR), blood pressure (BP), respiratory rate, perspiration, and inhibition of digestive and sexual functions 12.

The second principal stress-responsive system is the brain-pituitary adrenocortical axis, which regulates the release of glucocorticoid (GC) hormones into general circulation 13. Two of the most salient hormonal responses to stress are increases in norepinephrine and cortisol, GCs manufactured and released by the adrenal cortex. But stress is associated with several other neurohumoral responses. For instance, stress increases the release of growth hormone and prolactin and inhibits the release of the thyroid and sex steroid hormones. Many of these hormonal modulations have been linked to the release of cortisol 16.

The effect of acute exposure to heat stress on antioxidant status in rats has been intensively investigated. The present study indicates that acute exposure to heat stress for four hours in a single day showed significantly increase in lipid peroxidation. The increased level of lipid peroxidation is the evidence most frequently cited in support of the involvement of oxidative stress in tissues. The data suggest that there is the activation of the free radical precursors in all the investigated tissues. Antioxidants, both enzymatic (superoxide dismutase, glutathione peroxidase & catalase) and nonenzymatic (vitamins C and E) provide necessary defense against oxidative stress generated due to high ambient temperature 17.

Ascorbic acid is an important antioxidant in plasma and acts in tissues, involving ROS in the aqueous phase. In the brain, ascorbic acid has a dual effect– at low concentrations promoting lipid peroxidation and at higher concentrations acting as an antioxidant 20. It is also an anti-stress factor. Vitamin C and E cause the inhibition of peroxidation, mopping up of free radicals and disorganization and breakage of peroxidation chain reactions by inhibition of glutathione peroxidase and protein kinase, resulting in blockade of oxidative mechanisms 21.

CONCLUSION: In this study, the changes in antioxidant estimation helps in developing the new approach in understanding the changes in the body under acute exposure to heat stress which is mainly responsible for Pathophysiological changes and to know the thermoregulatory activities of the mammals.

In today’s world, heat is a cause of great concern in tropical countries. It causes changes in antioxidant levels in-vivo. There is a deleterious effect following the exposure to warm water swim stress leading to oxidative damage and generation of free radicals. Recent animal studies have provided evidence for stress-induced stimulation of the acute phase response to be at least partially responsible for stress-induced impairments in memory consolidation 22.

These studies support accumulating evidence for brain activity to be dynamically regulated by immune system factors 23.