INTRODUCTION:Sonneratia alba is a mangrove plant 1 belonging to family Sonneratiacea 2. They are found from East Africa through the Indian subcontinent, Southeast Asia, northern Australia, Borneo and Pacific islands. Sonneratia trees are 5-15m long with breathing roots, in which the flowers have many stamens, inserted on the calyx tube, and the ovary is superior. The flowers are sour-smelling, nocturnal, and bat-pollinated. The fruit is a leathery berry seated on the persistent calyx. The aerial root systems called pneumatophores which are slender cone in shape and stand up in line on the cable roots spreading horizontally in every direction in the soil 3.

S. alba ripe fruits are used to expel intestinal parasites while half-ripe fruits are usually applied for coughs treatment 4. Members of the Sonneratiaceae family are rich source of tannins which are known for its antimicrobial activity 5.

Bioactive coumarin from the bark of Sonneratia apetela 12, piperidine alkaloids from the leaves and stem of Chinese Mangrove Sonneratia hainanensis13has been reported.

There are few reports of pharmacological activities or photochemical in mangrove species in general, and fewer for S.alba in particular. Therefore an attempt has been taken to study the antioxidant, cytotoxic and antimicrobial activity of S.alba bark. The antioxidant property of the plant was evaluated using DPPH-free radical scavenging test, which was described previously in several past decades 14, 15.

The cytotoxic activity of plant materials was performed by using brine shrimp lethality bioassay, proposed by Michael 16 and modified by solis et al., 17]is rapid, simple, inexpensive and requires small amount of test samples (2-10mg or less) 18 . The antimicrobial activity was performed against different Gram-positive, Gram-negative and fungi species using disc diffusion technique which probably most widely used of all other methods 19.

Collection ofthe plant: S. alba (family: Sonneratiaceae) bark was collected from Sunderban area, Bangladesh in July 2007. The plant was identified and a specimen representing this collection has been deposited in the Dhaka university herbarium (DACB No. 31784), Dhaka, for further reference.

Extraction and Isolation: The stem bark of the plant was collected in fresh condition. The dried and coarse powder (700g) was extracted with methanol (2.5liters) in an air tight, clean flat-bottomed container for 15 days at room temperature with occasional stirring. The extract was then filtered through a fresh cotton plug followed by a Whatman No. 1 filter paper. The filtrate was concentrated using a rotary evaporator at low temperature (40-450C) and pressure. The weight of the crude extract was 20.57 gm. Solvent-solvent partitioning was done using the protocol designed by Kupchan 20 and modified version of Wagenen et al 21. The crude extract (5gm)was dissolved in 10%aqueous methanol which was subsequently extracted first with n-hexane(NH), then carbon tetrachloride (CTC) and finally with chloroform(CF).

All the three fractions were evaporated to dryness by using rotary evaporator and kept in airtight containers for further analysis (NH 675 mg, CTC 450 mg and CF 150 mg).

Screening of Antioxidant activity: The antioxidant (free radical scavenging) activity of the extracts on the stable radical 1, 1-diphenyl-2-pecrylhydrazyl (DPPH) was determined by the method developed by Brand –Williams et al., 1995 22. Here 2.0 mg of each of  the test sample was dissolved in methanol  and solution of varying concentrations such as 500, 250, 125, 62.50, 31.25, 15.62, 7.8125, 3.91, 1.95 and 0.98 µg/ml were obtained by serial dilution technique. Then 2.0 ml of each of the test sample was mixed with 3.0 ml of a DPPH-methanol solution (20µg/ml) and was allowed to stand for 20 minutes for reaction to occur. The absorbance was determined at 517 nm and from these values the corresponding percentage of inhibitions were calculated by using the following equations:

Then % inhibitions were plotted against respective concentrations used and from the graph IC50 was calculated using butylated hydroxyl toluene (BHT), a potential antioxidant, as positive control.

Screening of Cytotoxic activity: DMSO (Dimethyl sulfoxide) solutions of the three fractions were applied to Artemia salina in a one day in vivo assay 23, 24. For the experiment, 4 mg of each of the extracts were dissolved in DMSO and solutions of varying concentrations (400, 200, 100, 50, 25, 12.50, 6.25, 3.123, 1.563, 0.781 µg/ml) were obtained by serial dilution technique. The solutions were then added to the pre-marked vials containing ten live brine shrimp nauplii in 5ml simulated sea water. After 24 hours, the vials were inspected using magnifying glass and the number of survived nauplii inn each vial was counted.

From this data, the %lethality of brine shrimp nauplii was calculated for each concentration. The median lethal concentration (LC50) of the test samples were obtained by plotting percentage of the shrimp killed against the logarithm of the sample concentration.

Screening of Antimicrobial Activity: The antibacterial activity was carried out by the disc diffusion method 25 using nutrient agar medium. The sterile Matricel (BBL, cocksville USA) 6.0 mm filter paper discs, impregnated with 400 µg of n-hexane, carbon tetra chloride and chloroform extract, were placed gently on the previously marked zones in the agar plates. Standard Kanamycin discs (30 µg/discs) were as positive controls to ensure the activity against test organisms. The zones of inhibition produced by the extracts were compared with the standard.

Statistical Analysis: Each parameter was measured thrice. The zone of inhibition and IC50 values were taken as mean for antimicrobial screening and antioxidant activity respectively. Regression analysis was carried out for analyzing the data obtained from brine shrimp lethality bioassay to study the relationship between different samples and vincristine sulphate.

In brine shrimp lethality bioassay, % mortality increased gradually with the increase in concentration of the test sample (Figure 1). Table 2 shows the result of the brine shrimp lethality testing of various extractives of S. alba after 24 hours of exposure to the samples and the positive control, vincristine sulphate (VS). The LC50 values were found to be 14.94, 0.831, 3.288, 0.812 µg/ml for n-hexane, carbon tetrachloride, chloroform and Vincristine sulphate respectively. In comparison to positive control (Vincristine sulphate), the cytotoxicity exhibited by the carbon tetrachloride (CTC) soluble partitionate of methanol extract was promising. On the other hand, chloroform (CF) partitionate demonstrated moderate cytotoxic activity. The n-hexane (NH) showed less cytotoxicity than other fractions. 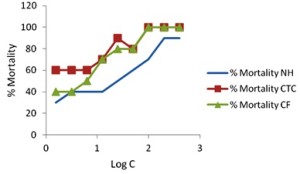 The antimicrobial effects of S. alba barks against various test organisms are shown in table 3. The n-hexane and chloroform extract exhibited no activity against the tested microorganisms at a concentration of 400µg/disc. The carbon tetrachloride extract showed moderate inhibitory activity against various Gram-positive bacteria such as Bacillus cereus (10 mm), Bacillus subtilis (11mm), Sarcina lutea (12mm) and Gram-negative bacteria such as Pseudomonas aeruginosa (10mm) and Shigella dysenteriae (12mm). It showed mild antifungal activity.

“-“indicates no zone of inhibition

CONCLUSION: The study reveals that extractives of bark of S. alba showed significant antioxidant, cytotoxic and antimicrobial properties. Further investigation is required for isolating the possible bioactive constituents responsible for such activities.

ACKNOWLEDGEMENT: The authors would like to acknowledge the head of Department of Clinical Pharmacy and Pharmacology, Faculty of Pharmacy, University of Dhaka, Dhaka, Bangladesh for providing facility and moral support to conduct the research.