INTRODUCTION: Pectin is an active poly-saccharide existing in different plants, for example, cactus, seaweed, and seagrass.

Inside, pectin content in cactus is the highest evaluated, compared to different plants. Pectin structure includes uronic acids (D-glucuronic acid, D-galacturonic acid, L-iduronic acid, and D-mannuronic acid), groups of natural methyl esters, groups of carboxyl amide, and carboxyl groups with the linkages of 1-4-glycoside 1, are divided into two groups (high methoxy pectin (DM > 50%) and low methoxy pectin (DM < 50%)). Their average molecular weight is from 50.000 to 150.000 Dalton. Pectin in cactus possesses value bioactivities, for example, antioxidant 2-4, antibacterial 5-7, reducing blood sugar, cholesterol reduction, against UV radiation, wound treatment, improving the excretion of heavy metal 8, 9. Therefore, pectin is useful for the product of nutrition, health, and disease 10. In different products such as jams, jellies, probiotic beverage, salad sauces, ice cream, and yogurt, pectin absence is also found because of their ability of thickener, stabilizer, suspending agent, emulsifier, flavor booster, and food preservation 11. The content, the biological activity, structural characteristics, and the applicating effect of pectin depend on a growth area and species of cactus, harvest time and the method of treatment and extraction 12, 13. Physical-chemistry, structure characterization, bioactive of pectin from cactus fruit peel Opuntia dillenii was noticed 14 and from the cactus trunk was not found.

In Vietnam, cactus commonly grows in nature, used as a medicinal plant for support treatment of spinal pain, and food for sheep 15, 16. The notices on physical-chemistry, structure characterization, bioactive of pectin from cactus grown on the Vietnam coast did not found. Therefore, antioxidant pectin and a suitable extraction condition will be useful more for an effective increase of production and application of pectin into foods, beverages, and pharmacy. Changing laws, a correlation between pectin content and antioxidant activities, and an impact of extraction condition on antioxidant pectin content shown in the current study. The things can open a new trend for cactus development grown in the coast into foods, functional food, and pharmacy, contributing an effective control of the extraction condition for biological activity pectin.

MATERIALS AND METHODS: Material preparation: Brush cactus Opuntia dillenii growth in Ninh Thuan province, Vietnam was collected in the Ninh Thuan coast, Vietnam and the storage and transportation of the samples to the laboratory were in the cold condition under 10 ºC. In the laboratory, the cactus was cleaned and dried under a radiation-heat with an air rate of 1.5 m/s by an infrared-freeze drying machine. After drying until 15% humidity, the cactus was crushed to the powder and stored at 4 ºC. The results in the study expressed on the dry weight of powder. All chemicals using in the analysis originated from Sigma-Aldrich, except for double-distiller water. The voucher specimens (NT-XR-17072018) of brush cactus Opuntia dillenii was authenticated and deposited by Dr. Luong Anh Dung in Da Lat University. 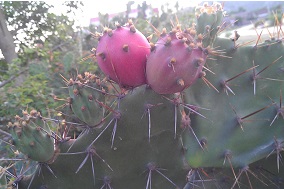 Inside, the evaluation of uronic acid was according to the developed method by Siew 18. The dissolve of the pectin sample was in 0.4 mL of distilled water according to the sample-to-water ratio of 0.1 %. Adjusting the solution pH was to 1.6 by using 4 M sulfamic–potassium sulphamate acid and vortex. Adding 2.5 mL solvent B (H2SO4 and 0.0125 M sodium tetraborate) was then into the compound. The mixture assimilation was in cold condition again. After the mixture boiling was for 20 min and cooled in ice. Adding 80 µL meta-hydroxydiphenol was continuously into the cold mixture and vortex. Keeping the mixture was for 20 min. Finally, the measurement of absorbance was at a wavelength of 520 nm with a D-galacturonic acid standard.

Total Antioxidant Activity: Total antioxidant activity was determined according to describe by Vu et al., 2017 19. 900 µl of distilled water and 3 ml of solution A (0.6 M sulfuric acid, 28 mM sodium phosphate, and 4 mM ammonium molybdate) was added into 100 µl of the sample, in turn, and vortexed. The mixture incubation was for 90 min at 95 °C. The absorbance measurement of the mixture was at a wavelength of 695 nm with the standard of ascorbic acid.

Viscosity Measurement of Pectin: determination of pectin viscosity was on the machine Brookfield.

Fourier Transform Infrared Spectroscopy (FTIR) of Antioxidant Pectin: FTIR spectra record of pectin was on IR Equinox 50, Bruker. Compressing pectin powder was into tablets with potassium bromide (KBr). The transmission (%) was in the 4,000-500 cm-1 region.

Determination of Esterification Degree of Pectin: The determination of the esterification degree of pectin was according to the methodology of Mohamed et al., (2016) 21. Pectin powder (0.05 g) was dissolved in 50 mL of distilled water and kept for 12-15 h at 50 °C. Adjusting the solution was to a pH of 8.5 by using 0.05 mol/L NaOH and ticked V1. Realizing the saponification process was by adding the same volume of 0.5 mol/L NaOH, and kept for 30 min at 30 °C. Neutralizing the compound was then by 0.5 mol/L HCl. The excess of HCl was treated by adding 0.05 mol/L NaOH and named V2. Calculation of esterification degree of pectin was as follow:

Data analysis: Each experiment was triplicated (n=3). The values are expressed under a mean ± standard deviation. The analysis of ANOVA and regression were by using soft Excel 2007. Remove the unnormal values by using the method of Dulcan.

Pectin content, total antioxidant activity, and reducing power changed according to the model of levels 5, 5, and 6, corresponding to the equations 2, 3, and 4, under the impact of solvent pH from 1 to 8. The regression equations have shown complex fluctuations of the target functions under the influence of factors in the extraction process.

TABLE 1: A PEARSON CORRELATION BETWEEN PECTIN CONTENT AND ANTIOXIDANT ACTIVITY (TAA, RP) UNDER THE EFFECT OF VARIOUS EXTRACTING CONDITIONS

TABLE 2: A PEARSON CORRELATION BETWEEN TOTAL ANTIOXIDANT ACTIVITY AND REDUCING POWER ACTIVITY UNDER THE EFFECT OF VARIOUS EXTRACTING CONDITIONS

The model of levels 5, 5, and 6 exhibited the change of pectin content, total antioxidant activity and reducing power under the impact of the solvent-to-material ratio from 1/1 to 8/1 (v/w), corresponding to the equation 5, 6 and 7.

The change of pectin content, total antioxidant activity, and reducing power under the impact of the extracting time from 30 to 180 min was according to the model of levels 3, 4, and 3, corresponding to the equation 8, 9, and 10.

FIG. 6: EFFECT OF TIMES OF REPEATED EXTRACTION ON PECTIN CONTENT AND ANTIOXIDANT ACTIVITY

The content and antioxidant activities of pectin were dropped nearly three times, compared to the first time of extraction. Pectin content and antioxidant activities had a close correlation according to the linear function (R2 > 0.9). The times of repeating extraction impacted on antioxidant pectin content (p < 0.05). The pectin color extracting from the cactus was white Fig. 6. The color was more beautiful than jackfruit (Artocarpus heterophyllus) waste pectin color (yellowish) 30. The impact of temperature and pH solvent at the second and third extraction times caused the stronger destruction of pectin that led to the efficiency of antioxidant pectin extraction decreased when extraction times increased.

Viscosity, Solubility Ability and Esterification Degree of Pectin: Pectin was whiter than commercial pectin. The solubility ability of pectin is fully in hot water. Viscosity of pectin got 0.893 ± 0.051 Pa.s. In the current study, the esterification degree of the pectin (62.38 ± 0.94%) was the average level, compared to previous reports. 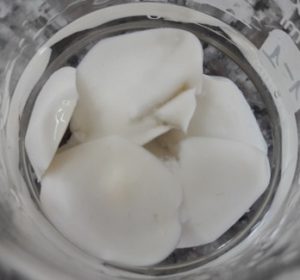 The solubility ability and the viscosity of pectin in hot water were similar to commercial pectin and higher than jackfruit (Artocarpus heterophyllus) waste pectin (partly soluble) 30. The viscosity of the pectin solution was high when the temperature of the solution was the same as room temperature. The phenomenon of water absorption increased when water temperature increased. When pectin powder clumped, the solubility of pectin in the water was less. Thus, it should be the storage of pectin powder in dry conditions and crushed to remove clump before dissolving of pectin into the water. The factors that affect the pectin solubility was determined, for example, time and temperature of dissolving, the rate of stirring in the dissolution process, storage time, and state of pectin powder.

Fourier Transform Infrared Spectroscopy and Sugar Composition of Pectin: Antioxidant pectin at the first time extraction and the second time extraction was determined some characterization by the method of infrared spectroscopy. FTIR spectra exhibited various groups of pectin Fig. 8. The study results were analyzed and compared to the notice of Gopi et al., 2015 22, and other publications, noticed in Table 3. 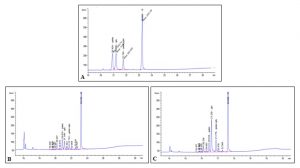 Sugar composition and structure characterization of pectin from cactus fruit Opuntia dillenii grown in Indian were different in comparison to pectin from cactus trunk Opuntia dillenii grown in Ninh Thuan coast, Vietnam. Components analysis of pectin in various extraction times showed a common point. Glucuronic acid and galacturonic acid exist in collected pectin, and the ratio of glucuronic acid and galacturonic acid was different for collected pectin in various extraction times. The pectin structure would be homogalacturonan or rhamnogalacturonan or both, noticed by Valérie et al., 2018 44. Under a condition of high H+ ion concentration, the hydrolysis of protopectin and the formation of carboxylic acid groups from carboxylate groups were increased 45, 46.

CONCLUSION: Pectin of cactus grown on the Ninh Thuan coast, Vietnam, possessed strongly antioxidant activity (R2 > 0.9). They contained two main compositions (glucuronic acid and galacturonic acid) and dissolved into hot water with an esterification degree of 62.38 ± 0.94%. Pectin exhibited white color, the viscosity of 0.893 ± 0.051 Pa.s, and fully solubility in 90 °C. Antioxidant activities and pectin content were strongly affected by input factors of the extraction condition, for example, temperature, pH, time a ratio of solvent-to-material, and times of repeated extraction (p < 0.05). The highest pectin content and highest antioxidant activities (TA and RP) corresponded to 109.781 ± 0.0159 mg uronic acid equivalent / g DW and (1.536 ± 0.009 mg ascorbic acid equivalent/g DW and 0.301 ± 0.019 mg FeSO4 equivalent/g DW), respectively, were at the temperature of 90 °C with the S/M ratio (6/1, v/w) for 90 min and acidic solvent (pH 4). They can fully deploy on the industrial scale for application into the food industry and pharmacy.