I. Archana and K. Vijayalakshmi *

INTRODUCTION: A free radical is any species capable of independent existence containing one or more unpaired electrons 1. The unpaired electron alters the chemical reactivity of the molecule/atom, making it more reactive than the corresponding non-radical form. Reactive Oxygen Species (ROS) are an inevitable and highly toxic consequence of metabolism in an atmosphere with 21% oxygen. ROS are forms of Oxygen that are more reactive than molecular oxygen (O2), and they include the superoxide anion (O2-), hydroxyl radical (OH) and hydrogen peroxide (H2O2). ROS plays an important role in the pathogenesis of various serious diseases, such as neurodegenerative disorders, cancer, cardiovascular disease, atherosclerosis, cataracts and inflammation 2. The oxidation process is one of the most important routes for producing free radicals in food, drugs and even living systems.

Substances that inhibit oxidation, and are capable of counteracting the damaging effects of oxidation in body tissue are termed antioxidants. They prevent damage caused by free radicals. They create a barrier from free radical damage that results in decaying process. Oxidation causes aging in the skin so antioxidants like Vitamin C, Vitamin E, goji berry, pomegranate, ellagic acid and green tea can reduce the process of aging. Antioxidants are intimately involved in the prevention of cellular damage 3. Trace metals like selenium, iron, copper, zinc and manganese are required for proper function of antioxidant enzyme systems in the body.

Phloroglucinol is a compound from Ecklonia cava, a species of brown algae. It is a naturally occurring secondary plant metabolite used for gastrointestinal disorder worldwide. Recently, this biomolecule has attracted attention for drug synthesis because of its anti-inflammatory 5, anti-microbial, anti-allergic 6 and Human Immunodeficiency Virus (HIV)-1 reverse transcriptase and protease inhibitor activities 7. So, it was planned to investigate on the antioxidant potential of phloroglucinol.

Chemicals: Phloroglucinol were purchased from Sigma - Aldrich. Ascorbic acid and all other chemicals procured were of highest grade available commercially.

DPPH Free Radical Scavenging Activity: The free radical scavenging activities of phloroglucinol were measured in-vitro by 1, 1-diphenyl-2-picryl hydrazyl (DPPH) assay 8. 1 ml of sample at different concentrations (10, 25, 50, 100 and 200 µg/ml) was added to 1 ml of ethanolic solution of DPPH. The mixture was shaken and allowed to stands at room temperature for 20 mins and the absorbance was measured at 517 nm using a spectrophotometer. The scavenging activity of the sample was calculated using the formula.

Super Oxide Scavenging Activity: Super oxide scavenging activity was measured following by the method 10. Super oxide anions were generated in a non-enzymatic phenazine methosulphate-nicotin amide adenine dinucleotide (PMS-NADH) System by oxidation of NADH and assayed by reduction of NBT (Nitro Blue Tetrazolium). In this study, 3 ml of tris-HCl buffer containing 1ml of NBT 50 µM, 1 ml of NADH (78 µM) and phloroglucinol in the range of 10 - 50 µg were added. The reaction was started by adding 1 ml of PMS solution (10 µM) to the mixture and incubated at 560 nm. The scavenging activity of the sample was calculated using the formula. The IC50 values of phloroglucinol were calculated and that of ascorbic acid.

Hydroxyl Radical Scavenging Activity: Scavenging of the hydroxyl free radical was measured by the method 11. The reaction mixture contained sample (10, 25, 50, 100 and 200 µg/ml). Deoxyribose (3.75 mM), Hydrogen peroxide (1 mM), Potassium Phosphate buffer (20 mM, pH = 7.4), FeCl3 (0.1 mM), EDTA (0.1 mM) and Ascorbic acid (0.1 mM) was incubated in a water bath at 100 ºC for 20 mins. The absorbance of the resulting solution was measured in UV-visible spectrophotometer at 532 nm. The scavenging activity of the sample was calculated using the formula.

Hydrogen Peroxide Radical Scavenging Activity: The ability of the phloroglucinol to scavenge hydrogen peroxide radical was determined by the method 12. The reaction mixture containing 500 µl of phosphate buffer and 400 µl of 2 mM hydrogen peroxide was mixed with various concentrations of phloroglucinol and incubated at room temperature for 5 mins. Then 2 ml of dichromate reagent was added and the decrease in colour intensity was measured at 570 nm. 2 ml of dichromate acetic acid reagent alone served as blank where as the reaction mixture without compound served as control. The scavenging activity was calculated according to the following formula.

RESULTS AND DISCUSSION: The DPPH assay method is derived from the reduction of DPPH, a stable free radical 13. The free radical DPPH with an odd electron gives a maximum absorption at 517 nm (purple colour). When antioxidants react with DPPH, which is a stable free radical becomes paired off in the presence of a hydrogen donor (e.g., a free radical scavenging antioxidant) and is reduced to the DPPHH and as consequence the absorbance is decreased resulting in decolouri-zation (yellow colour) with respect to the number of electrons gained. This test has been the most accepted model for evaluating the free radical scavenging activity of any new drug 14. The DPPH radical scavenging activity was detected and compared to ascorbic acid. Fig. 1 shows that the % inhibition of phloroglucinol and ascorbic acid. The IC50 value of phloroglucinol was found to be 42 ± 1.00 µg/ml for ascorbic acid 32.53 ± 2.25 µg/ml respectively. 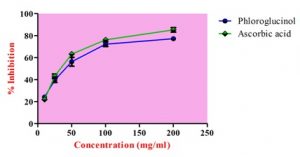 NO is a short-lived (half-life 3-30 s) colourless gas that is moderately soluble in water (up to 2 mmol/ L) but highly soluble in organic solvents 18. It is lipophilic in nature and can diffuse between cells very easily. NO is generated from the terminal guanido nitrogen atom L-arginine by NADPH-dependent enzymes called Nitric oxide synthases (NOS). NO has an unpaired electron, hence is a free radical. NO becomes nitrosonium cation (NO+) or nitroxyl anion (NO-) by donating or accepting an electron, respectively 19. Fig. 2 demonstrated the nitric oxide radical scavenging activity of different concentrations of phloroglucinol. The IC50 value of nitric oxide radical scavenging activity was found to be 53.66 ± 1.52 µg/ml for ascorbic acid 34.73 ± 1.67 µg/ml respectively. 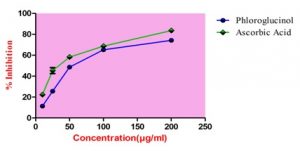 Superoxide anion radical (O2-) is generated by four-electron reduction of molecular oxygen into water. This radical is formed in aerobic cells due to electron leakage from the electron transport chain. Superoxide radicals (O2-) are also formed by activated phagocytes such as monocytes, macro-phages, eosinophils and neutrophils and the production of O2- is a crucial factor to kill bacteria through phagocytes. In living organisms, O2- is removed by the enzymes called superoxide dismutases (SOD).

Superoxide anion is a week oxidant produced during various biological reactions and is highly toxic 20. It is known as an initial radical and plays an important role in the formation of other reactive oxygen-species, such as hydrogen peroxide or singlet oxygen. Fig. 3 shows the superoxide anion radical scavenging activity of various concentrations of phloroglucinol. The IC50 value of superoxide anion radical scavenging activity was found to be 102 ± 2.00 µg/ml for ascorbic acid 25.33 ± 2.08 µg/ml respectively.

Hydroxyl radical is the most deleterious and reactive among the ROS and it bears the shortest half-life compared with other free radicals. The oxygen derived hydroxyl radicals along with the added transition metal ion (Fe2+) causes the degradation of deoxyribose into malondialdehyde which produces a pink chromogen with thio-barbituric acid 21. Hydroxyl radical can be formed by the Fenton reaction in the presence of reduced transition metals (Fe2+) and H2O2, which is known to be the most reactive of all the reduced forms of dioxygen and is thought to initiate cell damage in-vivo 22.

Scavenging of hydroxyl radical is an important antioxidant activity because of very high reactivity of the OH radical, enabling it to react with a wide range of molecules found in living cells such as sugars, amino acids, lipids and nucleotides 23. Thus, removing OH is very important for the protection of living systems. Fig. 4 shows that the hydroxyl radical scavenging activity of different concentrations of phloroglucinol. The IC50 value of hydroxyl radical scavenging activity was found to be 180 ± 3.60 µg/ml for ascorbic acid 30.6 ± 1.50 µg/ml respectively. 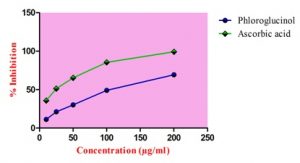 Hydrogen peroxide itself is not very reactive, but it can sometimes be toxic to the cell because it may give rise to hydroxyl radical in the cells. Thus, removal of H2O2 is significant for protection of food systems. H2O2 is an intermediate during endogenous oxidative metabolism and mediates radical oxygen formation such as OH, which may be used to predict the scavenging capability of antioxidants in biological systems 24. 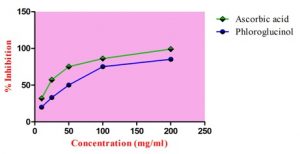 TABLE 1: COMPARISON OF ANTIOXIDANT ACTIVITY OF PHLOROGLUCINOL AND ASCORBIC ACID

CONCLUSION: Free radicals are often generated as by products of biological reactions or from exogenous factors. The involvement of free radicals in the pathogenesis of a large number of diseases is well documented. The results of the present study revealed that phloroglucinol possessed potent free radical scavenging ability with DPPH and hydrogen peroxide radical, when compared to that of other radicals. We conclude that phloroglucinol has high amount of phenolic hydroxyl group’s that plays an important role in its antioxidant activities. Therefore, phloroglucinol has good radical scavenging activity and may be used as a source of natural antioxidant.

I. Archana and K. Vijayalakshmi *