ABSTRACT: The aim of current study was to compare the total phenolic content (TPC), total flavonoid content (TFC) and antioxidant activity of roots of seven Asparagus species from North-West India. Total phenolic content measured by Folin-Ciocalteu method ranged from 3.85 ± 0.25 (A. racemosus) to 7.74 ± 0.03 (A. falcatus), 3.42 ± 0.14 (A. racemosus) to 7.22 ± 0.12 (A. falcatus) and 1.12 ± 0.13 (A. officinalis) to 3.93 ± 0.54 mg/g of dry weight of root powder (A. retrofractus) in methanolic, ethanolic and aqueous extracts, respectively, expressed as gallic acid equivalents. The total flavonoid content determined by Aluminium chloride method ranged from 0.61 ± 0.03 (A. officinalis) to 1.86 ± 0.0303 (A. densiflorus), 0.39 ± 0.01 (A. adscendens) to 1.63 ± 0.0403 (A. densiflorus) and 0.31 ± 0.00 (A. adscendens) to 1.51 ± 0.02mg/gDW (A. densiflorus) in methanolic, ethanolic and aqueous extracts, respectively expressed as rutin equivalents. The results showed that TPC and TFC values were highest in methanolic extracts followed by ethanolic and lowest in aqueous extracts. The antioxidant capacity in the form of DPPH was evaluated by spectrophotometric method. The lowest radical scavenging activity was recorded in A. adscendens (149.6 µg/ml), while highest in A. densiflorus (116.2 µg/ml).

INTRODUCTION: Medicinal plants, as source of remedies, are universally used in modern society as alternative therapeutic tools to synthetic medicines for the prevention or treatment of many diseases 1. Traditional herbs are usually cheaper, easily available and culturally more acceptable. Many synthetic drugs cause side effects, thereby increasing popularity of herbal medicine globally, even in regions with good healthcare systems. There has been a global boom in the incidences of cancer, hypertension and other diseases related to oxidative stress especially in developing countries.

Medicinal plants are used in prevention and reducing risk of many diseases related to oxidative stress, such as cancer and hypertension, because they contain strong antioxidants 2.

Medicinal plants produce several secondary metabolites such as phenols, flavonoids, saponins, tannins, alkaloids and sterols which are important source of pharmaceutical drugs. These secondary metabolites vary significantly in their quality and quantity in different plant parts 3. The antioxidant activity of plants is mainly due to phenolic compounds. Phenolics (phenolic compounds) are the most pronounced plant secondary metabolites, with many physiological functions in plants due to antioxidant properties having positive effects on human health, containing numerous varieties of compounds: phenolic acids, simple flavonoids, complex flavonoids, tannins etc. 1, 4, 5 Natural antioxidants have become objective of a great number of research studies in finding the sources of potentially safe, effective and cheap antioxidants. Natural antioxidants in the plants scavenge harmful free radicals from our body. Accumulation of free radicals can cause severe pathological conditions and fasten ageing process. It is possible to reduce the risk of chronic diseases and prevent disease progression by either enhancing the immune system of body or by supplementing with proven dietary antioxidants 6.

A huge number of plants are well known in traditional medicine system for their medicinal and therapeutic potentials worldwide alike Asparagus. The genus Asparagus belonging to the family Asparagaceae comprises about 300 species distributed all over the world, out of which 22 species have been reported in India. It is found to be grown throughout the temperate, tropical and subtropical parts of India 7, 8. Asparagus species are grown as herbaceous perennials, tender woody shrubs and vines provided with short underground rhizomes from which the aerial shoots arise. Roots are often tuberous, sometimes fleshy. The most distinguishing feature of the genus is presence of cladodes (stem modifications) performing the function of leaves (reduced to scale-like bracts, often spiny) 9. The major bioactive principals responsible for medicinal value of the genus are a group of steroidal saponins, polyphenols, flavonoids and sarsasapogenins. The Asparagus species show a great diverse of pharmacological activities: aphrodisiac, anti-oxidant, an immune-stimulant, anti-cancerous, anti-bacterial, anti-diabetic, anti-depressant, anti-inflammatory, anti-hepatotoxic, anti-tuberculosis, anti-diarrheal, cardio-protective, anti-aging, etc.7, 10, 11

Therefore, the purpose of this study is to evaluate the total phenols content, total flavonoids content and antioxidant potential of extracts of roots of seven Asparagus species by using three different solvents.

Collection of Plant Material: The fresh roots of seven Asparagus spp. viz., A. adscendens, A. racemosus, A. retrofractus, A. officinalis, A. densiflorus, A. falcatus and A. sprengeri were collected from various regions of North-West India when the plants were in their full bloom in the year 2015-16. The species were grown and maintained in the Botanical Garden of Punjabi University, Patiala. The species were identified by consulting different floras and comparing with the samples available in the Herbaria, Department of Botany, Punjabi University, Patiala (PUN), Botanical Survey of India (BSI), Dehra Dun, and Forest Research Institute (FRI), Dehra Dun. The plant specimens were submitted to the Herbarium, Department of Botany, Punjabi University, Patiala. The accession numbers of seven species of Asparagus are A. racemosus Willd. (62456), A. adscendens Roxb. (62457), A. officinalis L. (62458), A. sprengeri Regel (62459), A. retrofractus L. (62460), A. densiflorus (Kunth) Jessop (62461) and A. falcatus L. (62462). The data for locality and altitude are given in Table 1.

Extraction Procedure: The roots were well washed, air-dried and powdered. The root extracts were prepared by soaking 10 g of powder in 100 mL of each; double distilled water, methanol and ethanol followed by vigorous shaking.

The mixtures were left at room temperature for 72 h and then filtered with Whatman’s filter paper. The extracts so obtained were stored at 4 °C until further use.

Determination of Total Phenolic Content (TPC): Total phenolic content (TPC) was determined by spectrophotometer using Folin-Ciocalteu reagent according to a procedure described by Singleton and Rossi, 1965 with some modifications 12. 300 µL of diluted sample was treated with 5 mL of Folin-Ciocalteu reagent (diluted with distilled water 1:10 v/v). Then 4 mL of 7% sodium carbonate solution was added after 4 min. The tubes were vortexed for few seconds and were left at 40 °C for 30 min. The absorbance was read at 765 nm. Gallic acid was used as a reference standard. Then the content of phenolics in extracts was expressed as milligram of gallic acid equivalent (mg GAE/g of dried root).

Determination of Total Flavonoid Content (TFC): Aluminum chloride method (Park et al., 2008) was used for flavonoid content determination 13. To 0.3 mL of diluted sample 0.15 mL of NaNO2 (0.5 M), 0.15 mL of 0.3 M AlCl3.6H2O and 3.4 mL of 30% methanol were added in a test tube. After 5 min, 1 ml of NaOH (1 M) was added to the solution. Then it was mixed gently and absorbance was read at 506 nm spectrophotometrically. Rutin was used as a standard solution to obtain standard curve. The content of flavonoids in extracts was expressed in terms of rutin equivalents (mg of RU/g of dried root).

DPPH Radical Scavenging Assay: DPPH (2, 2-diphenyl- 2- picrylhydrazyl hydrate) radical scavenging activity of root extracts was determined spectrophotometrically by slightly modified method of Miliauskas et al., 2004 14. 2.8 mL of 80 μM methanolic solution of DPPH was added to 500 μl of diluted extract solutions prepared using methanol. The determination was carried out in triplicates. The blank sample was containing the same amount of methanol and DPPH. The reaction mixtures were kept in darkness at room temperature for 15 min. and then absorbance (A) was read at at 515 nM. The percent inhibition of DPPH was calculated by the following formula:

Total Phenolic Content: In the present work, we have examined the total phenolic, flavonoid content and DPPH radical scavenging activity of root extracts prepared in three solvents. Total phenolic content was expressed as gallic acid equivalents (mg GAE/g of dried root). All the studied species of Asparagus have good amount of phenols as shown in Table 2. TPC of methanol extracts of roots of Asparagus ranged from 3.85 ± 0.25 mg GAE/gDW (A. racemosus) to 7.74 ± 0.03 mg GAE/gDW (A. falcatus). In case of ethanol and aqueous extracts, lowest was recorded in A. racemosus (3.42 ± 0.14 mg GAE/gDW) and A. officinalis (1.12 ± 0.13 mg GAE/gDW) and highest in A. falcatus (7.22 ± 0.12 mg GAE/gDW) and A. retrofractus (3.93 ± 0.54 mg GAE/gDW), respectively. It was noticed that the highest concentration of phenolic compounds was found in the root extracts obtained using solvent of high polarity i.e. methanol followed by ethanol while lowest concentration was found in aqueous extracts.

DPPH Radical Scavenging Activity: As clearly seen in the results, the maximum quantity of phenols and flavonoids were recorded in the methanol extracts. So, they were further subjected to DPPH radical scavenging assay to test their antioxidant potential. The lowest radical scavenging activity among Asparagus species was recorded in A. adscendens (149.6 µg/ml), while highest in A. densiflorus (116.2 µg/ml). The other two species i.e. A. officinalis (128.3 µg/ml) and A. falcatus (127.7 µg/ml) have moderate antioxidant activity Fig. 1. 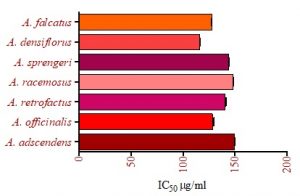 DISCUSSION: Phenols, flavonoids (polyphenols) are the important secondary metabolites found in the plant kingdom. They are simple molecules (phenolic acids, phenylpropanoids, ﬂavonoids) or can be found in highly polymerized form (lignins, tannins). They have been associated with various types of fields like biological, agricultural, and medical studies 15. The consumption of these compounds in the human diet regularly can help to protect from various disorders generated by excess of free radicals and reactive oxygen species 16. Phytochemical investigations of Asparagus have revealed the presence of phenolic compounds and ﬂavonoids in high concentrations which can be of potential use for fighting against various diseases 17. Extraction of phenols and flavonoids varied with the different solvent systems and methanol was found best for the yield in the present study. This is in confirmation with the previous reports which supports methanol as optimum extraction solvent 18. Many workers (Rodriaguez et al., 2005; Papoulias et al., 2009 and Lee et al., 2014) have studied the polyphenol content in different cultivars of A. officinalis and co-related the concentration of these with the antioxidant activities 19, 20, 21. As the concentration increases, the antioxidant potential also amplified. In the present study we have seen that A. falcatus and A. densiflorus have highest quantity of phenols and flavonoids, respectively. A. densiflorus also found to have highest radical scavenging activity among the seven species studied. A. falcatus has almost same level of antioxidant activity as compared to A. officinalis.

Survey of literature also reveals that there is no report on the analysis of polyphenolic content in the two species of Asparagus (A. densiflorus and A. falcatus), while there were few reports of biological activities. Hewawasam et al., 2008 reported anti-oxidative effect of tuberous extracts of A. falcatus on the acetaminophen toxicity in mice 22. Ghalib et al., 2012 isolated a novel caryophyllene type sesquiterpene lactone from the leaves of A. falcatus which shows anti-angiogenic activity on human umbilical vein endothelial cells 23. El-Deeb et al., 2016 reported molluscicidal activity of A. densiflorus against Biomphalaria alexandrina snails 24. Further research is needed in the other species of Asparagus to find out valuable bioactive compounds for pharmaceutical and nutraceutical industry.

ACKNOWLEDGEMENT: The authors would like to express their profound gratitude and sincere appreciation to DBTIPLS project (Project no. BT/PR-4548/INF/22/146/2012.), Sophisticated Instrumentation Centre and Department of Botany, Punjabi University Patiala for providing necessary facilities for the current study.