The method of 8 was followed. The free radical scavenging activity of the various extracts of Carica papaya (Linn.) were measured with formation of stable 1, 1-diphenyl-2-picryl hydrazyl (DPPH) radical using a spectrophotometer at 517nm. The percentage inhibition value was calculated using the formula,

The method of 9 was used. The Ferric Reducing Antioxidant Power was determined using 2, 4, 6-tripyridyl–S-triazine (TPTZ) in a spectrophotometer at 595nm. The results were expressed in terms of EC50,the concentration at a particular absorbance at which it is exactly half of the absorbance of the control.

The method of 10 was followed to evaluate the Nitric Oxide radical scavenging property. The Nitric Oxide Radical Scavenging Activity was measured by the formation of nitrite from sodium nitroprusside using Griess reagent (1% Sulphanilamide in 2.5% ortho-phosphoric acid, 0.1% Naphthyl ethylenediamine dihydrochloride) spectrophotometrically at 540nm.

The method of 11 was followed with slight modification. The superoxide Radical generated by the photo-oxidation of methionine-riboflavin and their scavenging property was determined spectrophotometrically at 560nm using Nitroblue tetrazolium (NBT) as the chromogenic substrate.

The estimation of total antioxidants was done by the method of 12. The formation of blue- green phosphomolybdenum complex was measured at 695nm.

The method of 13 was followed to estimate the total phenolic content using Folin- Ciocalteau reagent. The absorbance was measured at 760nm.

The method of 14 was followed. The red blood cell suspension was pre-incubated with different extracts of Carica papaya (Linn.) for 20minutes at 550C in a water bath. Then the absorbance of the suspension was measured at 540nm. Aspirin was used as positive control.

The thrombolytic potential was evaluated by the method of 16. The extracts were incubated with pre-weighed clot for 90 minutes at 370C.  The clots were centrifuged, the supernatant discarded and clot weighed again. The percentage of clot dissolved was calculated. 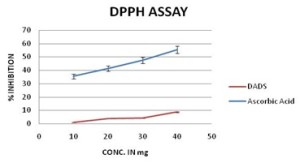 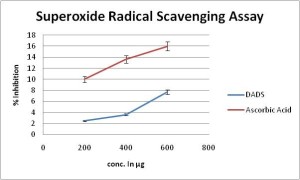 The total antioxidants present in Diallyl Disulphide were about 41.33±13.32 µM Ascorbic Acid Equivalents.

Heat Induced Hemolysis assay: The results of heat induced hemolytic assay are shown in Figure 3. A concentration of 100mg of the compounds was selected for the experiment. 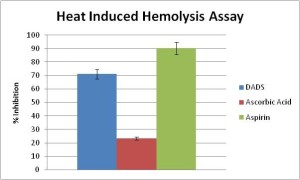 Osmotic Fragility of Erythrocytes: Diallyl Disulphide showed 0% inhibition in hypotonicity induced hemolysis as compared to that of Ascorbic Acid with 29.6% inhibition of hemolysis.

Thrombolytic Potential: The thrombolytic potential of Diallyl Disulphide is displayed in Figure 4. 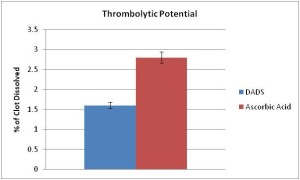 DISCUSSION: The antioxidant results from DPPH, TPTZ indicate a poor hydrogen donating ability and thus diminished ability to reduce the free radicals. The ability to donate electrons and scavenge the free radicals by Diallyl Disulphide is not significant compared to that of Ascorbic Acid which shows a five time higher capacity. Its thrombolytic potential when compared to streptokinase 16 was not significant (p value >0.05). But Diallyl Disulphide has shown a higher erythrocyte membrane stabilization by reducing the percentage of hemolysis in heat induced hemolytic assay than Ascorbic Acid. Thus Diallyl disulphide, a component of garlic oil might also have an important role in inhibiting the hemolysis and enhancing the membrane integrity at elevated temperatures.

CONCLUSIONS: The results suggest that Diallyl Disulphide is a poor antioxidant but a potential anti-hemolytic in In-vitro studies. Hence further In-vivo studies can be undertaken to evaluate the mechanism of the various physiological changes caused by Diallyl Disulphide.

ACKNOWLEDGEMENTS: The authors would like to thank the Board of Research in Nuclear Science (BRNS) for providing the funding for the project and Nitte University for providing the laboratory facilities to carry out the work. The authors also thank all the colleagues of Nitte University Center for Science Education and Research (NUCSER) for their support.