ABSTRACT: Fluoride (F) is highly electronegative anion with cumulative toxic effects, from prolonged ingestion that can lead to the pathogenesis known as fluorosis, a condition especially persistent in third world countries, where populations have little choice as to the main source of F-contaminated drinking. In recent times many neurological problems among children are being addressed in endemic areas. Thereby reasons for the neurotoxicity have to be explicated thoroughly.  In this study premated Wistar albino rats were exposed to 50 and 150 ppm fluoride in drinking water during gestation and pups born to them were used to analyze the extent of neurotoxicity imposed in discrete brain areas. Dose dependent toxicity was evident in different brain regions and fluoride exposure has significantly enhanced the levels of malondialdehyde (P>0.05), glutathione (P>0.05) and decreased the activities of superoxide dismutase (P>0.05), catalase (P>0.05), glutathione peroxidase (P>0.05) and glutathione- S-transferase (P>0.05). Alterations were region specific and oral supplementation of dietary antioxidants viz., vitamin-C (20mg), vitamin-E (400mg), zinc (200mg) and selenium (40mg) not only inhibited oxidative stress but also enhanced the activity of antioxidant enzymes. Thereby supplementation of antioxidants to toxicated animals significantly overcame toxic burden imposed by fluoride and therefore may be a therapeutic strategy for fluorotic victims.

INTRODUCTION:Fluoride is an essential trace element, plays a role in preventing dental carries and reducing tooth decay 1. However, excessive fluoride intake for a long is shown to cause serious public health problem 2. The guideline value of 1.5ppm (1.5 mg/L) set by WHO in 1984 and reaffirmed in 1993 needs to be revised

Dysfunction of the central nervous system (CNS) has been considered as a result of chronic fluorosis 6. As in the case of many chronic degenerative diseases, increased production of reactive oxygen species (ROS) and lipid peroxidation have even been considered to play vital role in the pathogenesis of chronic fluoride toxicity. Interactions between fluoride and free-radical reactions have been studied in various biological systems including fluorosis 7. It is known that fluoride can penetrate through the placental sac and be stored in certain organs of the fetus 8.

Recently, it was reported in children aged 3 to 10 years with endemic fluorosis and there was an increased oxidative stress 8. However, the relationship between fluorosis/fluoride toxicity and oxidative stress is still not clear.

In the absence of conclusive evidence for an increased oxidative stress in fluorosis, some studies suggest the use of antioxidants and antioxidant-rich foods for the management of fluorosis 9, 10 and also for the beneficial effects of antioxidants as antidotes for fluoride toxicity.

Keeping in view of the significance of developing nervous system and lacuna in the literature on aspect connected to neurotoxic effects of fluoride, this study was initiated, and in addition, antioxidant efficacy of selected antioxidants was measured.

Design: The animals were assorted into 3 groups. The control (I) group was given tap water (Less than 1ppm fluoride) and experimental group II & III received 50 ppm and 150 ppm fluoride in water during gestation and post gestation period respectively (pups were placentally and lactationally exposed to fluoride toxicity). The pups born to experimental animals were sorted further into various groups and were given orally respective antioxidants in water (w/v) except vitamin E (in olive oil w/v) during postnatal period till the day of autopsy with a daily dose/ kg body weight shown- vitamin - C (20mg), vitamin -E (400mg), zinc (200mg) and selenium (40mg).

At the end of 21st day of antioxidant treatment the pups were sacrificed and required brain tissues viz, cerebral cortex, medulla, cerebellum and spinal cord were separated and used for biochemical assays.

Chemicals: Epinephrine and DTNB (Ellman’s reagent) procured from Sigma chemicals USA, and other AR grade chemicals from Merck Ltd were used for the assay.

Biochemical Assays: Tissue samples were homogenized in requisite buffer for the assessment of oxidative stress indices, such as CAT, SOD, GST, GPx and GSH activity/ levels and the adopted procedures are shown below:

The percentage recovery was calculated by using the formula –

RESULTS: The results of the present experiment are depicted in figures 1-6.  It is evident from results that fluoride intoxication has augmented MDA levels indicating increased peroxidation followed by a marked decrease in the activity of catalase, SOD, GSH-Px and GST levels in discrete regions of CNS studied. The alterations were more apparent in 150 ppm exposure dose than the 50 ppm indicating dose dependent toxicity and brought perturbations in the antioxidant homeostasis. The toxicated rats supplemented with dietary antioxidants showed considerable protection in elevating the antioxidant levels to safeguarding the developing nervous system. The ameliorative efficacy offered by different antioxidants in terms of percentage (%) recovery is shown in figure 1-6.  Comparatively, Zinc (200mg) and Vitamin E (400mg), supplementation offered higher percent recovery, than vitamin C (20mg) and selenium (40mg).

DISCUSSION: Brain consumes greatest amount of oxygen and has high polyunsaturated fatty acids with low concentrations endogenous antioxidants; thereby oxygen free radicals exert their cytotoxic effect by peroxidation of membrane phospholipids leading to change in permeability and loss of membrane integrity 3. The source of oxygen toxicity arises from the mitochondria, where oxygen is the final acceptor of electrons in oxidative metabolism. Oxygen is reduced to water, as well as a number of ROS, including superoxide radical, hydrogen peroxide and hydroxyl radical. These ROS leak out of the mitochondria into the cytoplasm where they cause oxidative damage to a wide variety of biologically important molecules, including deoxyribonucleic acid, proteins and polyunsaturated fatty acids (PUFAs) 3, 4. Oxidative stress is a pivotal factor in many chronic neurodegenerative disorders 3, 4. 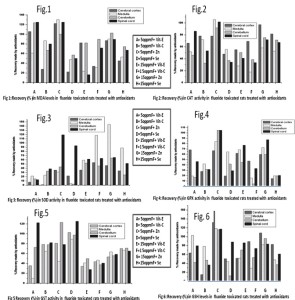 The findings of Vani and Reddy (2000) 19, Shivarajashankara et al (2001) 18, Kasperczyk and Kasperczyk (2006) 20 showed similar results and corroborate the present findings.  The activity levels of GST, GSH-Px found decreased in all the regions of CNS upon fluoride intoxication in 50 and 150ppm doses. This could be due to increased utilization of glutathione in curbing the free radical mediated toxic actions. When the tissues are exposed to oxidative stress they increase the activity and expression of antioxidant enzymes as a compensatory mechanism against free radical-mediated damage. Nevertheless, the increased activity of the antioxidant enzymes may be inadequate to counteract the potential damage in many conditions of oxidative stress 21. And also the decreased SOD activity may lead to decreased production of hydrogen peroxide may in turn lead to reduced oxidation of glutathione by glutathione peroxidase 22.

Oxidants and antioxidants play an important role in maintaining a balance between free radical produced by metabolism or derived from environmental sources and antioxidant system of the body. Deficiency of dietary antioxidants or precursors of antioxidants enhance oxidative damage 3, 4.  Restoring or maintaining oxidative buffering capacity therefore represents one useful therapeutic approach to minimize neuro-degeneration.

In the present experiment, supplementation of anti-oxidants to the fluoride intoxicated animals were carried out to assess the neuroprotective capability of vitamin C, vitamin E, selenium and Zinc.

Vitamin C is the most versatile antioxidant and a powerful scavenger of hydroxyl radical and regenerator of vitamin E, the key antioxidant glutathione, which reacts enzymatically (through GSH-Px) and non-enzymatically with a broad range of oxidants.  Vitamin E, a known free radical scavenger and offer protection against lipid peroxidation 23.

An essential role of selenium is the activation of GSH-Px and its activity is shown to be proportional to the log of the dietary selenium concentration3. Therefore, selenium supplementation enhances the availability of glutathione, which is one of the most intrinsic antioxidant that prevents cell damage. Zinc is essential for brain maturation, function and has shown to have a relationship with many enzymes that can prevent cell damage through activation of the antioxidant system 24.

In this study, the supplementation of selenium and zinc have considerably offered protection to brain compartments confirming the antioxidant ability to minimize the toxic burden imposed by fluoride.