ABSTRACT: Arterial thrombus formation are due to  mainly platelet activation and aggregation  which are considered to be central to pathological changes occurring in the vessel leading to the various complications and mortality . Antiplatelet drugs are used to prevent and help in the reversal of platelet aggregation in arterial thrombosis which was the major culprit in the pathology of myocardial infarction and ischaemic stroke. The most widely used antiplatelet agent namely Aspirin inhibits platelet cyclo-oxygenase which helps in conversion of arachidonic acid to platelet agonist thromboxane A2 but does not prevent platelet activation occurring via various signalling pathways that are independent of thromboxane A2 release. So apart from aspirin, a number of other compounds have been developed to overcome the deficiency by aspirin. Another major concern regarding the antiplatelet theraphy was the resistance by these drugs in preventing the troublesome complications. Bleeding is the most dreadful complication of most of the antiplatelet drugs. In general, in clinical practice, antiplatelet theraphy is instituted in patients whose thrombotic risk clearly overweighs their use of risk of bleeding manifestations. The development of newer antiplatelet drugs based on the understanding of their pharmacological mechanisms helps in the prevention of cardiovascular mortality with the least side effects.

INTRODUCTION:Platelets are the vital components of a proper normal homeostasis and important key participants in atherothrombosis.

The platelets, by virtue of their capacity to adhere to injured endothelial cells of the blood vessels, and to accumulate at sites of injury causes the formation of atherothrombosis 1.

Role of Platelets in Arterial Thrombosis 2: In normal persons with healthy vasculature, the circulating platelets are maintained in an inactive state by the endothelial synthesis of nitric oxide (NO) and the prostacyclin. Also the CD39 expression in the endothelial surface, a membrane associated ectoadenosine diphosphatase (ADPase) helps in the degradation of ADP released from activated platelets.

All these mechanisms were impaired when the vessel wall is damaged and the subendothelial matrix is exposed causing the opposite of the protective mechanisms. The adherence of the platelets to exposed collagen occurs via α2β1 and glycoprotein (GP) V1 and to the von Willebrand factor (vWF) via GPIbα and GPIIb/IIIa (αIIbβ3) receptors that are expressed constitutively on the platelet surface. Thromboxane A2 and ADP were synthesized and released by the adherent platelets. This causes the cyclical activation of ambient platelets and recruits them to the site of vascular injury.

The activation of the extrinsic pathway of coagulation occurred due to the disruption of the vessel wall which exposes tissue factor expressing cells to the blood. The binding of the clotting factors by the activated platelets potentiate the coagulation pathways and also supports the assembly of activation complexes that enhance thrombin generation. This thrombin in addition to converting fibrinogen to fibrin, it also serves as a potent platelet agonist and recruits more circulating platelets at the site of vascular injury. 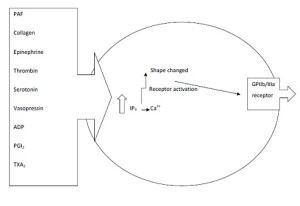 Aspirin 3: Aspirin is the leading therapeutic drug for the prevention of thromboembolic complications from atherosclerotic disease.

As  a result Arachidonic acid do not gain access to catalytic site of COX enzyme, TXA2 gets generated by platelets mediated by the enzyme COX being a very sensitive process due to inhibition of enzyme by aspirin.  PGI2 gets generated by the vascular endothelium, largely mediated by COX-2, being a less sensitive process to inhibition by aspirin as a result; low dose of aspirin has limited effects on vascular function dependent on PGI2, whereas aspirin is sufficient to suppress the production of TXA2 in a period of 1 week with a daily dose of 30 mg. 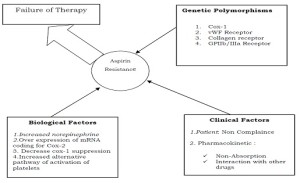 In those patients of renal or hepatic compromise dose adjustment is not needed.

About 40 % to 80% of cytochromes responsible for metabolism of drug in human is brought about CYP3A, 3A4 allele predominately metabolises clopidogrel however 50% of hepatic CYP3A activity is contributed by 3A5. 3A5 function polymorphism may influence the antiplatelet effect of clopidogrel. The drugs which are CYP3A substrates inhibit the production of active metabolite of clopidogrel and leading to thrombosis.

Randomized Clinical Trails shows that PPI reduces the antiplatelet effect of clopidogrel and was found combination of PPI and clopidogrel may lead to increased mortality in large observational study.  Similar to aspirin it also exhibits resistance and HPR.

Prasugrel 5: Prasugrel is one of the many newer drugs which have been introduced for preventing thrombosis after PCI.  It also acts at P2Y12 receptor.

Elinogrel 6: Elinogrel belonging to sulfonylurea, is a directly acting reversible inhibitor of P2Y12 receptor which can be administrated both orally and I.V

Cangrelor 7: Cangrelor is ADP receptor antagonists. It plays a significant role in managing patients with atherosclerotic disease in the perioperative period due to its short acting nature, I.V., reversible inhibitor of platelet function.

Ticagrelor 8:  Ticogrelor is one of the Cyclopentyltriazolopyrimidines classes of drugs undergoing clinical trials which are an orally active reversible P2Y12 receptor antagonist.

As a result plasma concentration of cilostazol and its active metabolite decreases. Non clinical significant reduction in plasma levels of cilostazol has been reported when administered with lovastatin. Increased level of lovastatin was reported but does not require dosage adjustment. When administered along with aspirin no clinically significant interaction was reported.

Abciximab: Abciximab, an antagonist to the activated form of GPIIb/IIIa is a humanized murine monoclonal antibody. Abciximab blocks the binding of adhesive molecules by binding to activated receptor with a very high affinity.The presence of this drug on the surface of the platelets for upto 2 weeks could be detected as it has long half-life and indicated for PCI.It does not have renal clearance and don’t require any dose modification. Unlike Abciximab, synthetic small molecules such as eptifibatide and tirofiban have renal clearance and very short half-life and it is used in case of PCI and unstable angina.

Thromboxane inhibitors 12, 13: Terutroban: In Phase III clinical trial, PERFORM (Prevention of cerebrovascular and cardiovascular Events of ischemic origin with teRutroban in patients with a history of ischemic stroke or Transient Ischemic attack) for secondary prevention of acute thrombotic complications terutroban has been tested. But unluckily the study was stopped prematurely because the efficacy of terutroban against aspirin could not be determined.

Ifetroban is a potent and selectively antagonises the thromboxane receptors.

CONCLUSION: Ischaemic heart disease (IHD) is the biggest killer worldwide and main reason for the condition is the platelet aggregation and therefore any treatment that improves its outcome will help in saving millions of lives.  Much attention has focused on inhibiting the central platelet aggregation in order to prevent thrombotic occlusion in very recent years. Aspirin the oldest of the antiplatelet drugs remains the cornerstone of therapy even with its adverse effects on gastric mucosa.

Clopidogrel is beneficial in prevention as well as medical and interventional therapy of acute coronary syndromes (ACS). But resistance with the use of aspirin and clopidogrel were the main concern for the cardiologist worldwide. So, various lab parameters and preventive measures were focused in reducing resistance. One main approach was the pharmacogenetic approach and treatment according to their genetic profile.

The other focus could be made on platelets interaction with leucocytes and the intervention against this will prevent further aggregation apart from platelet-platelet interaction. Newer antiplatelet therapy was on emergence and the results were convincing.