ABSTRACT: Evaluation of the anticancer effect of Trapa acornis (Family- Trapaceae) which has long been prescribed for various infectious and malignant diseases. The shells extract of Trapa acornis has been carried out by following due procedure. Cell lines, cultures were incorporated and procured for in-vitro and in-vivo study with reference to cell proliferation assay, cell viability assay and cell cycle analysis. Bio-assays of extracts from Trapa acornis showed that a fraction (fraction 3) from an ethanolic extract had an anticancer effect on SKBR3 and MDA-MB435 human breast cancer cells. In MDA-MB435 cells, cell cycle analysis showed that the plant extract fraction 3 induced the accumulation of cells in G2/M phase, whereas no significant change in cell cycle was detected in SKBR3 cells. The results indicated that the extract fraction could induce cell cycle arrest in some way. However, further investigation is needed to assess the molecular mechanisms mediated anticancer activities of this plant

INTRODUCTION:Breast cancer is one of the most prevalent malignancies in women in many countries worldwide. In India, breast cancer is the second in frequency after cervical cancer, with an estimated incidence rate of 17.2 per 100,000 which has increased in all parts of the country during the past decade. Though the breast cancer therapy which is usually multimodality treatment is in advance, cytotoxic drugs still play the important roles for the increasing survival rate together with good quality of life 1, 2. Therefore, the development and search for novel and effective anticancer agents have become very important issues 3.

To date, many cytotoxic agents including natural products isolated from plant sources have been investigated for the discovery of the potential novel anticancer drugs 4.Higher plants have long been shown to be excellent and reliable sources for the development of novel anticancer drugs. In India, many plants have been used for treatment of various malignancies over centuries.

Trapa acornis (Fam-Trapaceae) is a moderate-sized deciduous tree grown throughout India. The shells are woody, rough and used as a substitute for hepatotoxic and dysentery 5. The bark and shells of the plant are used for vitiated conditions of vata and pita while the shells are used for tumours, asthma, wounds, cardiac debility and hepatitis. The shell contains flavanoids, glycosides, saponins and tannins 6. Tyramine derivatives 6 have also been isolated from the shells of Trapa acornis. The shells were reported to possess hepatoprotective activity 7 while the shells shells contain antifungal compounds, namely, psoralene, xanthotoxin, 2, 6-dimethoxybenzoquinone and osthenol 8. However, the property of this plant, especially its anticancer activity, has not yet been investigated.

Therefore, this prompted us to investigate the inhibitory growth effect of this plant on two different breast cancer cell lines, SKBR3 and MDA-MB435.

Plant material and extraction procedures -Trapa acornis (fam-trapaceae)was collected from ponds from Balasore,Odisha situated in the northern part of India, and was identified by Dr S.K.Sahu, a taxonomist at the Dept.of Botany, Utkal University, Vanivihar, Orissa. A voucher specimen No.1253 was deposited at the same place. The shells of this plant were cut into small pieces and ground into powder. The powder (1.5 kg) was macerated three times with 15 litres of 95% ethanol for 7 days each 6. The extracts were concentrated under reduced pressure resulting in 80.50 g extract (DER = 25.5:1).

The ethanol extract was chromatographed on an Diaion® HP-20 column (Mitsubishi Chemical Corp., Japan), an ion-exchange resins open column, for total volume of 15 ml which was dry packed using the glass column (inner diameter 4 cm, 60 cm long) and equilibrated with water (100 ml). The ethanol extract (35 g) was dissolved in distilled water (100 ml) and sonicated for 15 min in an ultrasonic bath. The suspension was centrifuged at 20,000 rpm (about 42,000 × g) for 30 min. The supernatant was applied onto the Diaion® HP-20 column, and the eluent was collected to get the water soluble fraction (fraction 1).

The precipitate was dissolved in ethanol–water (1:1/100 ml) and ethanol (150 ml) to get the fractions 2 and 3, respectively. Each supernatant was repeatedly performed as described above. The precipitate was dissolved in ethyl acetate to get fraction 4. The chemical composition of each fraction was monitored on TLC. The fractions were on to silica gel GF254 Alufolien (Merck) and developed with a chloroform/ethanol (90:10, v/v). The phytosteryl glucoside was used as reference. After developing, the TLC was sprayed with anisaldehyde- sulfuric acid and heated in an oven at 100 °C for 1–2 min. The ethanol fraction revealed eight bands. Three bands were yellow-orange with Rf values of 0.12, 0.25 and 0.30. Five bands were violet-blue with Rf values of 0.17, 0.38, 0.41, 0.56 and 0.61. The violet-blue reference compound appeared at the Rf value of 0.17. A diagram of the extraction process is illustrated in Fig. 1.

Cell proliferation assay: A total of 1 × 104 cells/well was seeded in a 96-well plate. After 24 h of incubation, various concentrations of plant extracts were added to the wells to get the final concentration of 1, 10, 100 and 500 μg/ml. Control groups were added with DMSO to get the final concentration of 1%. Doxorubicin was used as positive control. Then cells were incubated for an additional 48 h. After 2 days, 50 μl of MTT3-(4,5-dimethylthiazol-2-yl)-2,5-diphenyl tetrazolium bromide (Sigma) 1 mg/ml in phosphate buffer saline (PBS) was added to each well and incubated for 4 h at 37 °C. The medium was removed and formazan was dissolved in DMSO and the optical density was measured at 590 mm using a Bio-assay reader (Biorad, USA) 8. 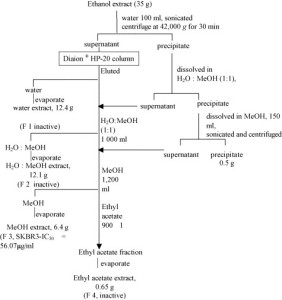 Cell viability assay: Cells were seeded in a 96-well plate at the same concentration as the cell proliferation assay and incubated for 24 h at 37 °C with 5% Co2. Various concentrations of plant extracts as indicated were added to each well including DMSO as control groups. After 48 h incubation, cells were trypsinized and viable cell counting was performed by enumerating cells which excluded trypan blue dye using a haemocytometer.

Statistical analysis: The data regarding cell proliferation and viability assay were expressed as means ± standard deviation. The values of ED50 were calculated by using R2 equation. “P” value less than 0.05 were considered significant. Statistical calculations by Pro Version 7.5 software (Original Lab Corporation, USA) were carried out.

RESULTS: The percentage of growth inhibition of the plant extract on human breast cancer cells is shown in Fig. 2A and B. Plant extracts from fractions 1 to 4 and also the crude extract (ethanolic extract) were used to determine the ED50 value (50% inhibition of cancer cell growth) in two different breast cancer cell lines, SKBR3 and MDA-MB435, with a final concentration ranging from 1 to 500 μg/ml. At 48 h, the ED50 values of fraction 3 were 56.07 ± 3.77 and 30.61±1.49 μg/ml for SKBR3 and MDA-MB435, respectively. As fraction 3 was found to have an inhibitory growth effect on these cell lines, this fraction was used to investigate the further effects of this plant on these cells. 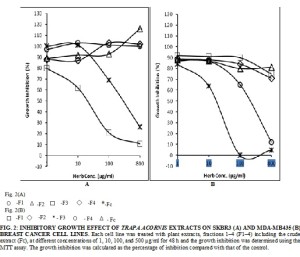 FIG. 2: INHIBITORY GROWTH EFFECT OF TRAPA ACORNIS EXTRACTS ON SKBR3 (A) AND MDA-MB435 (B) BREAST CANCER CELL LINES. Each cell line was treated with plant extracts, fractions 1–4 (F1–4) including the crude extract (Fc), at different concentrations of 1, 10, 100, and 500 μg/ml for 48 h and the growth inhibition was determined using the MTT assay. The growth inhibition was calculated as the percentage of inhibition compared with that of the control.

Effect of extract on cell viability: We also characterized the cytotoxic effect of Trapa acornis on SKBR3 and MDA-MB435 by conducting a cell viability assay stained with trypan blue. The culture of these two breast cancer cell lines was treated with plant extract fraction 3 at final concentrations of 1, 10, 100 and 500 μg/ml for 48 h. The results indicated that at a concentration of 100 μg/ml.  Both cell lines showed low viability of less than 50% as compared to that of the control group. No cell inhibition was observed at 10 μg/ml.

Cell cycle induced by extract: The effect of the plant extract on cell cycle progression on SKBR3 and MDA-MB435 was determined by flow cytometry. SKBR3 treated with plant extract fraction 3 at final concentrations of 160 μg/ml, as shown in Fig. 3A and B, showed slightly S phase block by decreasing the population of the S phase from 12.89% to 7.19%. For MDA-MB435 cell cycle progression, the result showed that the treated MDA-MB435 cells at concentration of 120 μg/ml. increased the population of the G2/M phase from 24.41% to 45.65% compared with that of the control groups (Fig. 4A and B). 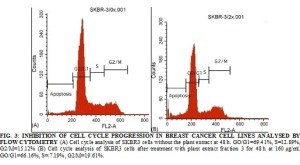 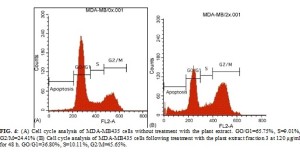 DISCUSSION: The plant ethanolic extract was fractionated on Diaion® HP-20 column chromatography, according to the compound polarity. The eluting solvents were transferred to the column, starting from water, water–ethanol (1:1), ethanol and ethyl acetate. They were subjected to the MTT test for antiproliferative activities. The water soluble fraction comprised the most polar compounds, i.e. inorganic salts, sugars, amino acids, saponins, the water-ethanol soluble fraction contained the glycosides and the ethyl acetate is composed of the aglycones.

The ethanolic extract showed the cytotoxicity against the SKBR3 and MDA-MB435 breast cancer cell lines with the ED50 values of 56.07±3.77 and 30.61±1.49 μg/ml, respectively. This inhibitory growth activity of the treated cells acted in a dose-dependent manner which was also confirmed by the cell viability with the trypan blue exclusion assay.

Such observation demonstrated that some active components of this plant should be in the ethanolic fraction.

Fig. 3A and B shows, SKBR3 cells treated with the plant extract for 48 h slightly decreased in the number of cells in S phase, whereas MDA-MB435 treated with the extract for 48 h remarkably accumulated in the G2/M phase of the cell cycle up to 45% as shown in Fig. 4A and B. The results indicated that the plant extract fraction 3 could suppress breast cancer cell lines proliferation especially MDA-MB435 via the cell cycle blockage.

Many anticancer agents from plants that have been prescribed for treating malignancies nowadays inhibit cancer cell growth through cell cycle regulation including the G2/M accumulation 10.  It is well known that agents affect the G2/M phase cell cycle arrest interact by targeting tubulin or disrupting the tubulin-microtubule equilibrium 11. According to our results, Trapa acornis exhibited the antiproliferative effect on MDA-MB435 breast cancer cells via G2/M cell cycle arrest, thus it should interact with tubulin to the same extent as the plant-derived chemotherapeutic agents. However, the antiproliferative activities of this plant might be possibly dependent on cell types including the culture conditions.

CONCLUSION: Trapa acornis fraction 3 could inhibit the proliferation of human breast cancer cell lines, SKBR3 and MDA-MB435. Our results demonstrated that the cell cycle via G2/M blockage plays some roles in Trapa acornis whichinduced antiproliferative activities in MDA-MB435. However, further chemical work and investigations at molecular level are required to identify the active components that could induce growth inhibition and to establish the possible correlation among the mentioned activities of the plant extract.

ACKNOWLEDGEMENT: We specially thank H.O.D of the University Department of Pharmaceutical Sciences for his valuable support & encouragement throughout the periods. This work was supported by the grant from UGC, NewDelhi.