ABSTRACT: The investigation was aimed at evaluation of the mechanism of anticancer activity of the glycosides from Calotropis gigantea on breast cancer MCF-7 cells through analysis of modulation of gene expression. Cardiac glycosides were isolated from the leaves of C. gigantea, and the compounds were identified through LC-MS. Influence of the glycoside sample on the expression of p53 and Bcl-2 genes in MCF-7 cells was assessed by comparative RT-PCR of MCF-7 cells treated with the test sample, standard drug, and control followed by validation through colony formation assay. Presence of calactin, calotropin, asceplin, and cymarin along with 4 other unidentified compounds has been detected in the glycoside fraction isolated from the leaf sample of C. gigantea. Influence of the glycosides on the modulation of the expression of tumor suppressor gene p53 indicated a weak down-regulation of its expression, whereas on the modulation of Bcl-2 was found to be drastic with almost absolute inhibition of its expression. Results of the study suggest that cardiac glycosides cast a dual influence on MCF-7 cells, namely cytotoxic effect through down-regulation of p53 gene expression and antiproliferative effect through down-regulation of Bcl-2 gene expression of which latter is more effective.

INTRODUCTION: Natural products have been regarded as an important source for potential chemotherapeutic agents. Plant-derived compounds constitute a large segment of chemotherapeutic agents and compounds in current use 1. Despite the evolution of new approaches for discovery, such as combinatorial chemistry and computer-based molecular modeling, the natural product-based approach continues to be one of the productive strategies 2.

Plant latex has been identified as a major source of bioactive prototypes of pharmaceuticals and pesticides 3, 4. Medicinal plants are known to have dynamic immunomodulatory effects by stimulating both nonspecific and specific immunity.

Many of them are well known for their immunomodulatory and antioxidant properties, leading to anticancer activities 5. Phytochemicals such as vitamins, carotenoids, terpenoids, flavonoids, polyphenols, alkaloids, tannins, saponins, pigments, enzymes, and minerals have been found to elicit anticancer activities 6, 7. These chemicals are reported to augment immune mechanism in favor of defense against cancer 8. Members of the genus Calotropis are known to have several medicinal properties and used in medication for a variety of clinical conditions 9-11.

Cardiac glycosides represent an important group of secondary metabolites in wide verities of plants. They are complex and well known for their bioactive influence on cellular activities of animals, including man 13. Cardiac glycosides often used as therapeutic agents for various ailments. In-vitro studies for the inhibition of malignant cell proliferation by cardiac glycosides started in late 1967 14.

Since, then numerous other reports have been confirmed the antiproliferative and apoptotic effects of these compounds in several cancer cell lines, including breast cancer 15-17. Our earlier investigation has detected the presence of calactin, calotropin, asceplin, and cymarin along with 4 other unidentified compounds in the leaves of C. gigantea and cytotoxic effect of the sample on MCF-7 cells under in-vitro conditions 18.

The current study attempts to understand the molecular mechanism of the anticancer effect of the glycosides through analysis of the expression of p53 and Bcl-2 genes.

MATERIALS AND METHODS: All chemicals used in the current study have been procured from Sigma - Aldrich and culture media from Gibco Invitrogen.

Extraction and Isolation of Glycosides: Leaves of C. gigantea Collection No. Abhilasha Sharma, 69858, deposited in Foundation for Revitalization of Local Health Tradition (FRLHT), Bangalore], collected from Acharya Institute campus were shade dried for 15 days at room temperature. Dried leaves were crushed into fine powder. 100gm of leaf powder was macerated with 250 ml 80% methanol. The mixture was agitated with the help of magnetic stirrer for 5 h, and the extract was filtered using Whatman filter paper no. 1. The filtrate was concentrated with the help of simple distillation by removing extra methanol. 6 N HCl (Hydrochloric acid) was added to the filtrate and mixed well. The mixture was kept in a hot air oven at 180 ºC for 24 h. The sediment, comprising glycosides isolated from leaf tissue of the plant was filtered and dried in a hot air oven set at 30 ºC and kept at room temperature for future use.

Cell Culture: MCF-7 cells [procured from National Centre for Cell Sciences, Pune. India] were seeded in 2 ml Dulbecco’s Modified Eagle’s Medium (DMEM) with 10% Fetal Bovine Serum (FBS) per well in a 6 well plate at a density of 0.4 × 106 and incubated overnight at 37 ºC / 5% CO2 in a CO2 incubator [Nuaire NU 5510E]. 10mg/ml stock of test sample was prepared in DMEM with 10% Dimethyl sulfoxide (DMSO) and was added in a concentration of 2.7 mg/ml (IC50 concentration) to the overnight culture of cells in duplicates. Untreated cells were taken as a negative control whereas 1 µg/ml of doxorubicin was added to the positive control. Incubation was done at 37 ºC /5% CO2 for 48 h and used for RNA isolation 12 and gene expression studies explained in the following section.

Ribonucleic Acid (RNA) Isolation: Total RNA was isolated from the cells by Guanidinium thiocyanate (GITC) method. To the cells, 1ml of GITC solution (4M GITC, 1% β- mercaptoethanol), 50µl of 2M Na- acetate, 500µl of water-saturated phenol and 150 µl of chloroform: isoamyl alcohol (49:1) were added and mixed gently by inverting the tube. The reaction mixture was kept on ice for phase separation and centrifuged at 12000 rpm at 2 ºC for 20 min.  The RNA in the aqueous phase was precipitated with 0.6 volume of isopropanol. The pellet was washed with 1ml of 70% ethanol and air dried. The RNA pellet was dissolved in 30 µl of Diethylpyrocarbonate (DEPC) water.

After reverse transcription, 2µl of complementary Deoxyribonucleic acid (cDNA) was subjected to PCR amplification with the primer pairs for the two marker genes, p53, Bcl-2, and the control housekeeping gene β-actin12. The primers used for PCR were as follows:

PCR reactions were performed in a final volume of 50µl containing 0.3mM of each dNTP, 0.4 µM of each primers, 2.5U of Taq DNA polymerase in 1X PCR reaction buffer. The PCR amplification was performed in a Master cycler® Thermocycler (Eppendorf, Germany) using the following conditions: initial denaturation of 94oC for 2 minutes followed by 35 cycles of denaturation at 94 ºC for 1 min, annealing at 64 ºC (for β-actin and Bcl-2) or 69 ºC (for p53) for 1 min and extension at 72 ºC for 1.2 min and terminated after final extension of 72 ºC for 8 min. 10µl of PCR product was subjected to 1% agarose gel electrophoresis and visualized using ethidium bromide staining. Quantitation of each band was performed by densitometry analysis software Image J and the results expressed as the ratio p53/β-actin or Bcl-2/β-actin in percent to the control.

Colony Formation Assay: MCF-7 cells were seeded in 6 well plates at 800 cells per well. One well was exposed to ultraviolet (UV) light (30 W) for 20 min. Cells in the second well were treated with IC50 concentration (i.e., 2.7 mg/ml) of the glycoside sample, and the third well was kept as the control without any treatment. All cultures were maintained for 7 days at 37 ºC / 5% CO2. After 7 days, cells were stained with methylene blue and the number of colonies of cells was counted by visual screening under a microscope.

RESULTS: To understand the molecular mechanism involved in the anticancer activity of the glycoside sample on MCF-7 cells, two genes, namely p53 (tumor suppressor) and Bcl-2 (anti-apoptotic) have been selected as markers. Isolation of RNA and RT-PCR of the above genes has been carried out to assess the modulatory effect of the glycoside extract on their expression.

Electrophoretic bands of the RT-PCR amplified DNAs of the above genes along with the house keeping gene β-actin (as the control for RT-PCR) are illustrated in Fig. 1. 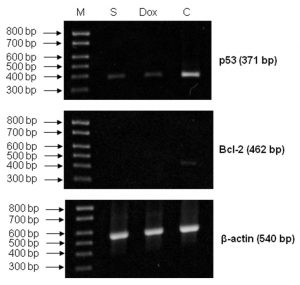 Results of the densitometry analysis of the RT-PCR DNA bands are presented in Table 1.

Expression of Bcl-2 was found to be negligibly low, as no DNA band could be detected in samples from treated cells. 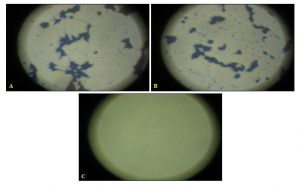 A total of 25 clones of cells were visualized in a culture not exposed to any treatment (Negative control) while 10 clones in culture exposed to UV radiation (Positive control). Cultures exposed to glycoside sample (Test) did not develop any clones after 7 days of incubation, suggesting that the glycoside sample has cytotoxic and anti-proliferative activity on MCF-7 cells.

DISCUSSION: Anticancer property of crude extract of the roots of Calotropis procera has been reported on human oral and central nervous system cancer cell lines 19 Cardiac glycosides are reported to be involved in modulation of gene expression in mammalian cells. The glycoside sample from C. gigantea used in the current study comprised calactin, calotropin, asceplin and cymarin, and 4 other unidentified compounds 18. Role of calactin as an agent inducing apoptosis in human leukemia cells has been confirmed by Lee et al. 21

However, the IC50 value of the test sample (2.7mg/ml) of current study 18 is much higher than that of purified compound reported by Lee et al. 21  Therefore, the real active compound may be at a lower amount, or its activity may be getting interfered by other compounds present in the sample. Purification and comparison of the activity of the purified individual compounds with their synthetic counterparts as well as characterization of the unknown compounds detected in the test sample 18 are being planned to be pursued separately.

The study has further attempted to analyze the influence of the test sample on the expression of tumor marker genes like p53 and Bcl-2. The gene p53 is known for its apoptotic activity via activation of caspase 9.  This involves binding of Caspase 9 to cytochrome c and Apaf1. p53 activates the expression of Apaf1 and Bax.  Bax, in turn, stimulates the release of cytochrome c from mitochondria leading to apoptosis. This gene is often used as a marker for assessing the anticancer activities of test components in bioassays 22, 23. Bcl-2 is another marker gene employed for anticancer bioassays. Bcl-2 family of proteins have been reported to influence the mitochondrial path­way of apoptosis 24. Bcl-2 of the Bcl-2 fam­ily of proteins prevents all mitochondrial changes including cytochrome c release 25, 26 through which it protects cells from undergoing apoptosis via the p53 pathway 22.

CONCLUSION: The study has analyzed the influence of cardiac glycoside sample isolated from C. gigantea comprising calactin, calotropin, asceplin, and cymarin and 4 other unidentified compounds on expression of p53 and Bcl-2 genes in breast cancer cells CF-7 under in-vitro conditions. Results of the investigation have confirmed down-regulation of the expression of both the marker genes by the test sample. The effect was more on Bcl-2 than on p53. Hence, it can be concluded that the glycoside sample is antiproliferative and apoptotic in its action on MCF-7 cells.