Numerous herbal agents have been claimed to having antipyretic property. One up-coming botanical fruit of Morinda citrifolia, whose Polynesian name is Noni, is unique in view of the large number of medical indications that characterize claims for its efficacy. Researchers at an independent research facility found that Noni was a selective inhibitor of COX-2 enzyme. The analgesic efficacy of the Noni extract is 75 % as strong as morphine. Thus the present study was planned to study the antipyretic activity of aqueous & alcoholic extracts of Noni on yeast induced pyrexia, a model for experimentally induced pyrexia in albino rats. The alcoholic extract of Noni has been found to produce more significant antipyretic activity after 2nd, 3rd and 4th hours of administration.

INTRODUCTION: Over the past few years natural products have become increasingly popular and the field of natural herbal remedies has flourished to a great extent. One up-coming botanical fruit of Morinda citrifolia, whose Polynesian name is Noni, is currently the subject of much science, myth, and marketing hype. Noni, as it is called in the Hawaiian language, is also called the great morinda and Indian mulberry.

The fruit has a pungent aroma when ripening and is often called “cheese fruit” or “vomit fruit”. It is hoped that scientific evaluation of many potential medicinal plant extracts may provide safe and broad spectrum herbal formulations. As a result of adverse effects of NSAID, the use of these drugs as anti-inflammatory and antipyretic agents has not been successful in all cases.

Morinda citrifolia, a small tree grows predominantly along the tropical coasts. It have already been reported that Noni have antibacterial, antiviral, antifungal, antitumor, antidiabetes, analgesic, anti-inflammatory and immune enhancing activities 1, 2. Morinda citrifolia was extensively used in folk medicine by the Polynesians for over 2000 years 3. The fruit of Noni is claimed to prevent and cure several diseases 4. Noni is the best source of anti oxidant. It is the best nutritional supplement & works at cellular level.

It improves efficacy of medicines & supports immune system, circulatory system, digestive system & metabolic system. A number of major components have been identified in the Noni plant such as potassium, vitamin C, anthraquinones, β-sitosterol, carotene, vitamin A, flavone glycosides, linoleic acid, caproic acid, ursolic acid and rutin. Researchers at an independent research facility found that Noni was a selective inhibitor of COX-2 enzyme 5. The analgesic efficacy of the Noni extract is 75 % as strong as morphine, yet non-addictive and side effect free 6. It has been reported to possess anti-inflammatory, analgesic and anti-ulcerogenic properties.

In the present study an indigenous medicinal plant Morinda citrifolia (Noni) was evaluated to its antipyretic activities. The study conducted to explore with aqueous and alcoholic extracts of Noni on experimentally induced pyrexia in rats.

MATERIALS AND METHODS: The experiment was conducted on 36 healthy adult albino rats of either sex, weighing between 120-150g. The rats were procured from small animal section of Vet. College HISSAR and maintained in polypropylene cages and housed in the lab animal section of the department under standard managemental conditions. Rats were fed standard ration ad libtum and free access to clean water. De-worming was done before the start of experiment by praziquantel @ 1 tablet per 10 kg body weight, single dose.

Treatment groups: Before experimentation rats were fasted overnight but water was given ad libitum. The experiment was conducted in six groups of rats consisting of six rats in each group. The rats were administered the aqueous and alcoholic extracts of Noni orally in graded doses of 250, 500, 1000 mg/kg body weight. In pyretic rats, aqueous and alcoholic extracts of Noni was administered orally, the model of experiment was as follows-

Induction of pyrexia: The rats were individually caged in a room maintained at the constant temperature of 25 °C. Normal rectal temperature was recorded by a Telethermometer and its hourly variation was noted over a period of 4 hours at the beginning of the experiment. The pyrexia was produced according to the method of Gujral et al. 7. A suspension of 15 percent dried Brewers yeast and 2 percent gum acacia in normal saline was injected subcutaneously. The volume injected was 1.0 ml of suspension per 100 gm of body weight. A stabilized temperature was recorded in 18 hours.

Data collection and Statistical analysis: The antipyretic activity of aqueous and alcoholic extracts of Noni was studied after administering the drugs, orally to a group of rats in graded doses of 250,500 and1000 mg/kg body weight .The antipyretic effect was studied on yeast induced pyrexia in rats. In pyretic rats, the rectal temperature was recorded at hourly interval for a period of 4 hours after administration of the drug. The data obtained during study were analyzed, employing Completely Randomized Design (CRD) as described by Snedecor and Cocharan 8.

RESULTS AND DISCUSSION: A phyto-therapeutic approach to modern drug development can provide many invaluable drugs from traditional medicinal plants. It is hoped that scientific evaluation of many potential medicinal plant extracts may provide safe and broad spectrum herbal formulations. The adverse effects of NSAIDS such as induced by opiates, the use of these drugs as antipyretic and analgesic agents have not been successful in all cases.

This stimulated the search for new compound possessing potent antipyretic activity with least toxic effect. The efforts in the present study have been concentrated to find out the effect of Morinda citrifolia (Noni) an indigenous medicinal plant to explore the antipyretic properties.

Pyrexia occurs due to the imbalance between the heat production and loss. The bacterial endotoxins and other pyrogens, like yeast, act by inducing the enzyme cyclooxygenase which ultimately leads to the biosynthesis and release of endogenous pyrogens by neutrophils and other cells. The endogenous pyrogen, which is known to be prostaglandin E, acts upon the hypothalamic thermoregulatory centre to set the thermostat at a higher point, with the result the rate of heat production increases and heat loss decreases leading to pyrexia. The role of prostaglandins in pyrexia was reported by Feldberg and Myres 9. 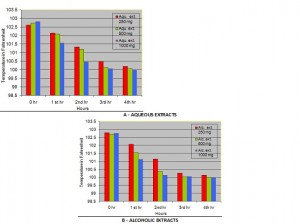 The results indicated that the peak antipyretic effects of aqueous and alcoholic extracts of Noni were produced after 2nd hours of their administration. Both the extracts showed their dose dependent antipyretic activity. The alcoholic extracts of Noni exhibited maximum antipyretic activity at the dose rate of 1000 mg/kg body weight as compared to equivalent doses of aqueous extract. The appreciable antipyretic effect noticed at 500 mg/kg was comparable to standard drug aspirin. The temperature decreases from 40.1°C in 0 hour to 38.2°C in 1.5th hour and 37.5°C in 2nd hour respectively.

TABLE 2: ANALYSIS OF VARIANCE FOR ANTIPYRETIC ACTIVITY OF ORALLY ADMINISTERED AQUEOUS AND ALCOHOLIC EXTRACTS OF NONI ON YEAST INDUCED PYREXIA

The dose dependent antipyretic property was observed in another member of family Rubaicae, Benincasa hispida. Its ethanolic extract produced significant (P<0.05) antipyretic effect in dose dependent manner 10. Similarly, the methanolic extract of C. febrifuga caused a dose-dependent decrease in rectal temperature (25, 50, 100 mg/kg). The effect became significant at 30 and 60 min at the highest dose of 100 mg/kg which was 38.38 in 0 hour to 37.3 in 30 min and 37.6 in 60 min respectively 11. All these findings suggest the huge scope of herbal plant for pyrexia treatment.

CONCLUSION: In the recent years, there is an increasing interest in the search for potential drugs, especially of plant origin, that are capable of masking the untoward side effects of steroidal and non-steroidal drugs. In present study the aqueous and alcoholic extracts of Noni were investigated for their antipyretic activity. This experimental investigation was carried out in albino rats of either sex weighing 120-150 g, to elucidate the mechanism of action of Morinda citrifolia (Noni).

ACKNOWLEDGEMENT: The authors are thankful to the Dean, College of Veterinary Science and Animal husbandry, Mhow for providing research facilities and WNRF, Chennai for financial support and free supply of fruits.