INTRODUCTION: Fever means “A body temperature above the normal range 1. It can be caused due to abnormalities in temperature regulating centre. According to modern concept, fever is not a disease itself. It is one of the most common symptoms produced in many physiological and pathological conditions

But Unani system of medicine considers Humma (Fever) as a disease and many types of fever are described by Unani physicians such as Hummae Youm (Ephemeral fever), Humma Khiltia (Humoural fever) and Hummae Diq (Hectic fever). Humma Khiltia is based on the presence of humours and has further sub divisions.

Humma produced in absence of humours is called Humma Yaumia.  Hummae Diq is a type of fever which is infiltrated in organs 2. To control and treat fever, conventional medicine has introduced drugs like Paracetamol and Aspirin, but these drugs are reported to produce harmful side effects. Paracetamol has been reported to cause hepatocellular damage, renal tubular necrosis in acute cases. Similarly, aspirin produces salicylism, allergy, and Rey’s syndrome 3.

A number of single and compound drugs are used in the management of fever on the basis of their ascribed effects and nature of humma in Unani Medicine. Some plant origin Unani drugs have been reported for their Antipyretic activity, such as Khaksi (Sismbrium irio) 4, Gilo (Tinospora cordifolia), Chiraita (Swertia charata) 5 and Ghaafis (Gentiana olivieri Griseb) 6, of them some have been scientifically proved as an effective antipyretic agent.

Ghaafis is an important drug which is used by Unani physicians as habis (astringent), qatil kirme shikam (anthelminitic), mudir (diuretic) and muqawi (tonic) 6 for long, and has also been mentioned for its antipyretic activity by various Unani scholar such as Zakariya razi 10, Ibn sina 7, Ibn abbas majusi 8 Najmul gani 9, but it has not been scientifically studied so far, for its antipyretic effect.

In Unani Medicine, most of the drugs are used in crude form, however, some drugs have also been recommended for use in extract form. Many Unani physicians have recommended the use of extract of Ghaafis 9. Also from scientific view point, it may be said that drugs used in extract form will be more effective than the crude form. Therefore, present study is undertaken to evaluate the antipyretic activity of Ghaafis in crude and extract form in animal models.

The present study was carried out in the department of Ilmul Advia, National Institute of Unani Medicine (NIUM), Bangalore. Before starting the experiment the research protocol was submitted to Institutional Animal Ethics Committee (IAEC) of National Institute of Unani Medicine, Bangalore for ethical clearance Vide Reg. No. 953/C/06/CPCSEA. The experiment was stared after the approval of the protocol.

Gule Ghaafis (Gentiana olivieri Griseb flowers) were obtained from the local crude drug market of Bangalore. The drug was identified by botanist of Raw Materials & Museum (RHMD) of Delhi Dr. H. B. Singh Vide certification reference no. NISCAIR/RHMD/Consult/-2012-13/2034/42 and a certificate for the same was issued. Voucher specimens were retained for further reference; the same were also submitted to the department of Ilmul Advia, National Institute of Unani Medicine, Bangalore.

Brewer’s yeast (Sigma-Aldrich) and Crocin (GlaxoSmithKline) were used in the study.

Preparation and Dosage of the test Drug:

The test drug was dried in shade and powdered coarsely in an electric grinder in the pharmacy of National Institute of Unani Medicine, Bangalore. Since, both crude and whole extract of the test drug were used separately, aqueous extract was prepared by Soxhlet apparatus. Shaded dried Gule Ghaafis (100gm) was extracted in distilled water for six to eight hours. The filtrate was evaporated on water bath. Since the aqueous extract was used for the study, the dose of the extract was calculated with reference to the dose of air dried drug after obtaining the 27% yield percentage. The test drug was given orally in the dose of 600mg/kg and 1200mg/kg of crude form and 162mg/kg and 324mg/kg of extract dissolved in distilled water 11.

The study was carried out in healthy adult albino Wistar rats of either sex; weighing 150-200 gm. Rats were procured from a registered animal breeder of Bangalore. The animals were kept in the animal house of NIUM, Bangalore and were housed in polyprophylene cages under controlled conditions of light (12/12) and temperature (23±20C) and fed with standard commercial food pellet (Hindustan Lever Ltd.) and tap water ad libitum, under hygienic conditions. The animals were acclimatized to laboratory conditions for 15 days before the experiment.

Before experimentation rats were fasted overnight but water was given ad libitum. The experiment was conducted in six groups of rats consisting of six rats in each group. The rats were administered the crude and aqueous extracts of Gule Ghaafis orally in graded doses of 600, 1200mg/kg and extract 162 and 324mg/kg body weight. In pyretic rats, crude and aqueous extracts of Gule Ghaafis was administered orally, the model of experiment was as follows-

Group II- Acetaminophen orally as standard drug at the dose of 200mg/kg 12.

Group III- Powder of Gule Ghaafis orally at the dose of 600mg/kg.

Group IV- Powder of Gule Ghaafis orally at the dose of 1200mg/kg.

Group V- Aqueous extract of Gule Ghaafis orally at the dose of 162 mg/kg.

Antipyretic activity was measured by Brewer’s yeast induced pyrexia in rats by the procedure described by Vogel 12 was followed for the antipyretic studies. The animals were divided into six groups having six in each. By insertion of a Digital thermometer to a depth of 2cm into the rectum the initial rectal temperatures are recorded. The fever was induced in animal by injection of 10ml/kg of Brewer’s yeast suspension subcutaneously in the back below the nape of the neck. The site of injection is massaged in order to spread the suspension beneath the skin. The room temperature kept at 22-240C. Immediately after Brewer’s yeast administration, food is withdrawn. 18 h post challenge, the rise in rectal temperature was recorded. The measurement is repeated after 30min.

Only those rats which showed an increase in temperature of at least 0.60C (10F) were used for further experiment. The animals receive the test or standard drug by oral administration. After the drug was administered the rectal temperature of all the rates in each group was recorded at an interval of   30, 60, 120 and 180 min post dosing 14.

All the values are expressed as mean ±standard error of means  for analyzed statistically by repeated measures ANOVA tests with Tukey-Kramer Multiple comparison test significant at p < 0.01 levels.

Not significant with respect to before induction 120 and 180mnt standard. GroupVIth at 60 and 120mnt. 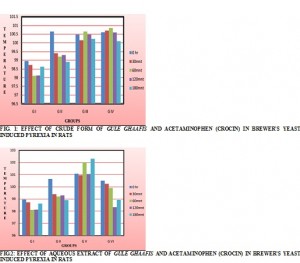 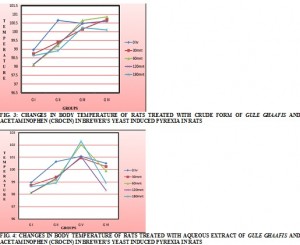 No significant antipyretic effect of Gule Ghaafis was observed in test group III and IV (Crude form test drug) and test group V (aqueous extract lower dose). When the groups were compared with each other it was found that the standard drug and the extract at higher dose reduced the pyrexia at 30, 60, 120 and 180 minutes. However, other groups too reduced pyrexia but the reduction was not very significant.

It is well-known that phytochemicals are responsible for many of the pharmacological activities. Flavonoids and its related compounds also exhibit inhibition of arachidonic acid peroxidation, which results in reduction of prostaglandin levels thus reducing the fever. Since flavonoids exhibit several biological effects such as anti-inflammatory, antimicrobial, antihepatotoxic and antiulcer activities, it is likely that the antipyretic action of Gentiana olivier Grseb is related to the presence of flavonoids 16. The antipyretic activities also may be attributed to the presence of alkaloids, phenols, polyphenols, saponins, tannins, anthraquinones, steroids and especially the diterpenes 17. The test drug contains bitter secoiridoid glycosides, olivierosides A (1), B (2) and C (3), gentiopicroside, sweroside, 6-O-β-D-glucosylgentiopicroside, swertiapunimarin, eustomoside, eustomorusside and septemfidoside 18 Furthermore, several alkaloids, fatty acids, secoiridoids, triterpenoids (oleanolic acid (OA) and ursolic acid from flowers) and bioflavonoids were isolated from the plant. Oleanolic acidic ubiquitous triterpenoid in plant kingdom, medicinal herbs, and is integral part of the human diet. OA (oleanolic acid) is a main triterpenic acid reported in GOG flowers 19, 20. Some of these phytochemicals may be responsible for antipyretic activity.