Aqueous extract of the fruits of the plant Piper longum was studied for their Anti rheumatoid activity in Freunds Adjuvant Induced Arthritis Rats with the dose of 200 and 400 mg/kg p. o. The administration of extract reported significant reduction in paw swelling on 4th, 8th, 14th and 21st day after sub-plenter administration of Complete Freunds adjuvant. The paw swelling was measured as a volume displacement using digital Plethysmometer. Furthermore, these results supported by radiographic analysis of affected knees of rats. From the results observed in the present investigation, it may be concluded that the aqueous extract of P. longum possesses potentially useful anti-arthritic activity in Complete Freunds Adjuvant model.

INTRODUCTION: Rheumatoid arthritis (RA) is an autoimmune disease characterized by the chronic inflammation of synovial joints which results in severe bone destruction 1. It affects approximately 5 million people worldwide of which 50 % are unable to work beyond 10 years of diagnosis 2. A number of anti-inflammatory and ant rheumatic drugs used in treatment of RA have been developed over the past few decades, but still there is urgent need for more effective drugs with lower side effects 3. Non-steroidal anti-inflammatory drugs (NSAIDs) are representing the mainstay of therapeutic management of arthritis. It is now recognized, however, these drugs, although effective at relieving the symptoms of the disease, may do little to improve the condition, and in some instances may contribute to its progression 4. This further suggests need of effective alternative therapy. Recent studies shows that commonly used medicinal plants and herbal preparations are a good source for alternative therapy.

Piper longum L. (Piperaceae), popularly known in India as Pippali, is used as traditional medicine in Asia, especially in Indian medicine and in Pacific islands 5. Various Piper species, widely distributed in the tropical and subtropical regions of the world, have been used as a spice and also as a folk medicine 6, 7. Piper longum is a reported as good remedy for treating gonorrhea, menstrual pain, tuberculosis, respiratory tract infections, chronic gut related pain 8. Other reported beneficial effects of P. longum include analgesic and diuretic effects, relaxation of muscle tension, and alleviation of anxiety 9, 10. The extract of crude drug of P. longum is frequently used as anti-inflammatory and insecticidal agents 7, 10. Piperine was the first amide isolated from piper species and was reported to display central nervous system depression, antipyretic, and anti-inflammatory activity 6. Piperine is a potent inhibitor of the mixed function oxygenase system and non-specific inhibition of cytochrome P450 isoenzymes 11. The constituents of piper species have inhibitory activity on prostaglandin and leukotriene biosynthesis in vitro 7 and anitifibrotic activity 12. However, to our knowledge, no basic scientific studies on antiarthritic activity of aqueous extract of  P. longum has been reported, hence  we have evaluated the antiarthritic activity of the plant using Complete Freunds adjuvant (CFA) induced arthritis in rat which mimics symptoms of  rheumatoid arthritis in humans. CFA induces the arthritis by heat killed cells of Mycobacterium tuberculosis and it mimics the latter’s immunological and biochemical features wherein self antigens are recognized as foreign bodies.

Animals: Male albino rats of Wistar strain weighing around 200-250 g were used for the experiment purpose. The animals were housed in solid-bottomed polypropylene cages and acclimatized to animal house conditions. The rats were fed with commercial standard diet and water ad libitum. The experiments were designed and conducted in accordance with the guideline of CPCSEA and approved by Institutional Animal Ethical Committee (IAEC).

Preparation of Extract: The dried powder (1 kg) of seeds of Piper longum was macerated with the distilled water for 48 hours. The solvent from extract was removed completely by evaporation under vaccum using rotary evaporator and dried to get fine powder.

Induction of Arthritis: Arthritis was induced by a single sub-plenter injection of 0.1 ml of Complete Freund’s adjuvant (CFA)(Sigma Chemicals, USA) containing 1.0 mg dry heat-killed Mycobacterium tuberculosis per milliliter sterile paraffin oil into a foot pad of the left hind paw of male rats 13. The swelling in hind paws were periodically examined in each paw from the ankle using digital Plethysmometer (Panlabs, India).

Experimental Setup: Animals were divided into four groups of six animals in each group as follows (Table 1).

Paw Volume Displacement: On 0th day, the left hind paw volume of all rats as a volume displacement was measured using digital plethysmometer and on 1st day arthritis was induced in all rats using CFA. The aforementioned drug treatment was started on 1st day and continued for 14 days. The assessment of antiarthritic activity was carried out by measuring change in paw volume edema on 4th, 8th, 14th and 21st day after induction. The percent inhibition of paw volume of treated rats against vehicle treated rats was evaluated.

Radiographic Analysis: High resolution radiograph of the effected knees were taken using a Agfa machine Siemens system. The region between epiphysial growth plates of the femur and tibia (including the patella) was selected for analysis and representative rats hind paws from each group were photographed.

Statistical Analysis: Results were expressed as Mean±SEM. The data was analyzed using one way Analysis of Variance (ANOVA) followed by Dunnett’s test.

TABLE 2: EFFECT OF AQUEOUS EXTRACT OF P. LONGUM AND CFA ON MEAN CHANGE IN POW VOLUME IN RAT 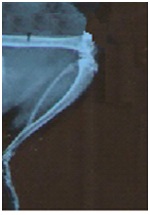 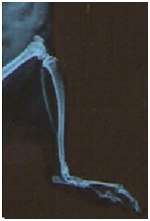 FIG. 1: RADIOGRAPHIC ANALYSIS OF THE EFFECTED KNEES OF RATS

DISCUSSION AND CONCLUSION: CFA induced arthritis in rats is probably the best and the most widely used model since it has a close similarity to human rheumatoid disease. The determination of magnitude of swelling of the injected hind paw is the most objective measurement that can be made to assess the antiarthritic activity .The change in the paw volumes in the 21 days after the inoculation of Freunds adjuvant into the hind paw is illustrated as above. In the antiarthritic groups the injected paws showed an immediate acute inflammatory response reaching a maximum on the fourth day 14. The edema volume of the injected paw (primary lesion) developed rapidly and reached a peak in 18 hours after injection and persisted at this level for up to 90 hours 15. A chronic phase of inflammation reached a plateau from the fourteenth to twenty first days 14.

In adjuvant-induced arthritis model rats developed a chronic swelling in multiple joints with influence of inflammatory cells, erosion of joint cartilage and bone destruction and remodeling which have close similarities to human rheumatoid disease 16. These inflammatory changes ultimately result in the complete destruction of joint integrity and functions in the affected animal. Also, the CFA administered rats showed soft tissue swelling around the ankle joints during the development of arthritis, which was considered as edema of the particular tissues 17.

The determination of paw swelling is apparently simple, sensitive and quick procedure for evaluating the degree of inflammation and the therapeutic effects of drugs. Chronic inflammation involves the release of number of mediators like cytokines (IL-IB and TNF-α) and interferon’s. These mediators are responsible for the pain, destruction of bone and cartilage that can lead to severe disability 18. TNF- α - induced free radical generation like H2O2 activates inflammatory signalling pathway, including NF-kB in vascular cells 19, and regulating the expression of cell adhesion molecules on endothelial cells and hence play an important role in various inflammatory diseases 20. It is reported that chloroform extracts of P. longum inhibited the TNF- α -induced expression of intercellular adhesion molecule-1 (ICAM-1) furthermore, extract inhibited the adherence of neutrophils to endothelial monolayer by inhibiting the TNF- α -induced expression of ICAM-1, Vascular cell adhesion molecule-1 (VCAM-1) and E-selectin in a dose- and time- dependent manner. Also, chloroform extracts of P. longum significantly inhibited the TNF- α -induced activation of NF-kB 21.

However, in present study standard drug and aqueous extract of P. longum significantly suppressed the swelling of the paws. Reduction of paw swelling in the P. longum treated rats from the third week onwards may be due to immunological protection rendered by the plant extract. Piperine was the first amide isolated from piper species and was reported to display central nervous system depression, antipyretic, and anti-inflammatory activity 6. Piperine is a potent inhibitor of the mixed function oxygenase system and non-specific inhibition of P450 isoenzymes 11. Also piperine has potent immunomodulatory activity 22. From the results observed in the current investigation, it may be concluded that the aqueous extract of P. longum possesses potentially useful anti-arthritic activity since it was active in Complete Freunds Adjuvant model.