ABSTRACT: The antitumor property of the successive, standardized methanolic (MeOH) extract of Aegle marmelos roots (MAM) was investigated in Dalton’s ascites lymphoma mice model. Materials and methods: Flavonoid present in MAM was quantitatively estimated using high performance thin layer chromatography. MAM (100, 300 mg/kg) was administered orally for 15 days to assess antitumor activity. The tumor was induced by DAL cell lines. The mean survival time (MST) and status of the antioxidant enzymes were analysed, 5 fluoro uracil (5FU) was used as standard drug. Results and discussion: Quercetin content in MAM was found to be as 208 mg/gm with the linearity range 200-800 ng. MAM treated tumor bearing mice exhibited significant (p<0.05) increase in the mean survival time. There was a significant improvement in the super oxide dismutase (SOD), catalase levels and (p<0.01) reduction in lipid peroxidation and nitrous oxide (p<0.01) levels were observed with the MAM treatment in comparison to vehicle treated tumor bearing mice.

INTRODUCTION: The search for cytotoxic agents continues to be an important topic to discover newer anticancer drugs. Among the medicinal plants, Aegle marmelos Correa (Rutaceae) appears to exhibit variety of therapeutic properties 1, 2. This plant is indigenous to India, Bangladesh, Burma and Srilanka. Roots and stem bark of Aegle marmelos are used in Ayurvedic formulations such as Bilvadi leha, Citraka haritaki, Dasamula and Dhānvantara taila. These formulations are used to treat various ailments 3. Previous investigations revealed that the roots exhibit antibacterial 4, antidiarrhoeal 5, antiulcer 6 and antiallergic activity. 5

Hence, it was aimed to determine the anticancer potential of the standardized methanolic extracts of Aegle marmelos.

All solvents used were of analytical grade and obtained from Sigma Aldrich (India). Flavonoid standard quercetin was purchased from Himedia.

The roots of Aegle marmelos were collected from Udumalpet area, Tirupur district, Tamil Nadu, India. Voucher specimen was deposited at PSG College of Pharmacy, Coimbatore, Tamilnadu, India. The plant material collected along with the leaf and flower parts were authenticated by Botanical Survey of India, Coimbatore.

Preparation of the extracts: 7

Sample of coarsely powdered roots of Aegle marmelos were successively extracted with solvents with increasing polarity starting from n-hexane, chloroform, ethyl acetate and methanol using cold maceration technique. The successive extracts obtained were distilled off from the solvents and preserved in a desiccator.

TLC was performed on Silica gel 60F254 TLC plates (E Merck, Germany) with ethyl acetate -acetic acid- formic acid -water, 100:11:11:26 (v/v) as mobile phase 8 samples were applied to the plates as 5 mm wide from the bottom, by means of pressurized nitrogen gas (150 kg/cm2) through CAMAG Linomat V fitted  with a 100 µl syringe. Ascending development, with the mobile phase consisting of solvent was performed in a twin –trough glass chamber (10x10cm) obtained from CAMAG, saturated with the mobile phases for 30 minutes at room temperature (25 ± 2o C) and relatively humidity (60 ± 5%). After the sample application, the TLC plates were developed for a distance of 8 mm. The bands were visualized in CAMAG UV cabinet at 254 nm and 366 nm.

The mice were divided into five groups, each group consisting of four animals. DLA cells (1x106cells/mouse) were inoculated on day ‘0’ and the mice were treated either with the standard drug 5 FU (20mg/kg) or MAM (100, 300 mg/kg). The treatments were started 24 hrs after inoculation. The death pattern of animals due to tumor bearing was noted and the percentage increase in life span was calculated.

Where “T” and “C” are mean survival of treated and control mice respectively.

Catalase measurement was done based on the ability of catalase to inhibit oxidation of hydrogen peroxide (H2O2). The change in absorbance at 240 nm was measured for 3 minutes. dy/dx for every minute for each assay was calculated and the results are expressed as CAT units of protein

Lipid peroxidation was evaluated by measuring the TBARS content according to the TBA test described by Ohkawa & co workers. The absorbance of the supernatant was determined at 532 nm using spectrophotometer against the blank. TBARS content were expressed in nanomoles / mg protein.

Nitric oxide was evaluated by Green et.al (1982). The colour intensity of the chromogen was read at 540 nm.

The mobile phase ethyl acetate-acetic acid-formic acid-water (100:11:11:26, v/v/v/v) eluted the MAM and also the reference standard quercetin. A defined peak at Rf = 0.34 for the standard flavonoid quercetin (Fig. 3) was obtained. The 3D display of the densitogram and chromotogram (Fig: 1, 2) indicates the presence of quercetin in the MAM. The limit of detection was found to be 20 ng/spot on silica gel 60F254 and the linearity range were validated for the range of 200-800 ng (Table 1). Polynomial regression curve based on the peak height Versus concentration of the standard flavonoid (quercetin) with the standard deviation 0.37% and r value 0.9999 were documented (Fig. 4). The quantity of quercetin present in the MAM was found to be 0.208 mg/gm. 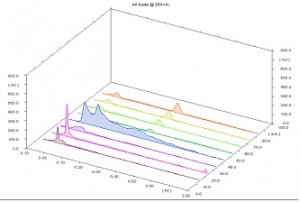 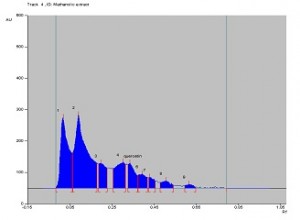 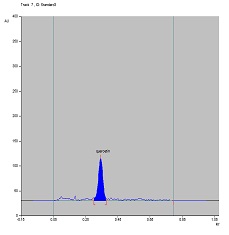 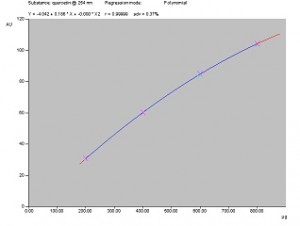 The DLA induced ascites tumor bearing mice survived for a period of 14 ± 1.2 days. 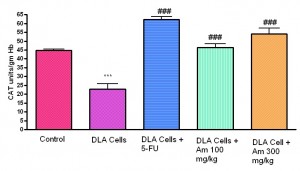 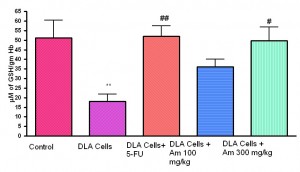 Lipid peroxidation and NO levels:

CONCLUSION: In conclusion, the anti tumor potential of the flavonoidal rich extract of Aegle marmelos have been studied and its effect may be due to antioxidative stress mechanisms. The presence phenoxy radical scavengers in Aegle marmelos might also be responsible for the antitumor potential. Further bioactivity guided fractionation could be done to identify and characterize the potential leads.