ABSTRACT: In the present study antiurolithic activity of various extract of the whole plant of Ageratum consider Linn. was investigated on experimentally urolithiasis induced male albino wistar rats. Urolithiasis was induced in animals by using ethylene glycol (5% v/v, 2ml/rat/7days). Experimental induction of hyperoxaluria results in the rapid formation of calcium oxalate crystals in the renal tubules of experimental animals. The investigation was done based on estimation of stone-forming constituents oxalate, calcium, and phosphate, in kidney and urine. Treatment with ethyl acetate, ethanol and aqueous extract (500mg/kg, p.o) of Ageratum conzoides, the standard group treated with calculi (500mg/kg, p.o) and a positive control group treated with the only saline. The results are compared with calculi, ethanolic extracts, and ethyl acetate extract are significantly lowered the increased levels of oxalate, calcium, and phosphate in urine and also significantly reduced their retention in the kidney. The presented data indicate that administration of Ageratum conzoides extracts decrease urolithiasis and also prevented the formation of urinary stones; it proves the antiurolithiatic activity of the plant.

INTRODUCTION: Urolithiasis is a condition in which urinary calculi are formed anywhere in the urinary system. The term urolithiasis comes from the Greek word, uron means urine; lithos means stone­ 1. Almost 3 million of peoples were affected this disease 2. It is called nephrolithiasis, kidney stones, or renal calculi. It can be classically explained as the imbalance between promoters and inhibitors of crystallization.

Deficiency of any one of inhibitors or excess of any one of promoters plays an important role a stone formation 3. It is a succession of several physicochemical events including supersaturation, nucleation, growth, aggregation, and retention within the kidneys 4. The calculi may sometimes stay in a position from where it is originated or migrate down the urinary tract. The recurrence rate of this disease is very high 5.

The other factors which aggravate kidney stone are patient with metabolic syndrome, gout, and person with high body mass index. Majority of the kidney stones contain calcium salt (calcium oxalate and calcium phosphate) as main crystalline compound 6. This is because commonly, human urine is supersaturated with calcium or uric acid, and crystalluria are very common. Daily excretion of solute and urine pH is the important factor which produces kidney stone. The irritation produced by the stone leads to secondary infection like pyelonephritis, cystitis, and urethritis. It is more common in males than females because of longer urethra 7. Other stone types include the metabolites of certain drugs like Indinavir, Topiramate, Vitamin D analogs 8.

Drug treatments are available for the elimination of kidney stones. The purpose of medical management is breaking the stone or dissolving the stone and prevent recurrence of stone. Citrate prevents the recurrences rate of stone 9. So patients are advised to increase the consumption of citric acid contain juices 10. Alpha-blockers inhibit ureteral muscle spasm, and decrease the basal tone, reduce the peristaltic frequency and colic pain and thereby improving the stone expulsion 11. Nifedipine is spontaneous increases passage of stone 12.

The overuse of synthetic drug results in a higher incidence of adverse drug reaction. So nowadays humans are returned to natural herbs for safe remedies 13, 14.  It does not produce any type of complication, like synthetic drugs to patients. Ageratum conyzoides used as folkloric medicine for urolithithiatic condition 15.

In the present study, the main objective to evaluate the preventive antiurolithiatic activity of the various extract in the whole plant of Ageratum conyzoides in ethylene glycol induced urolithiasis in rats 16, 17.

Plant: The plant Ageratum conyzoides Linn was collected from the nearest area of kallannai in Thiruchy, Tamil Nadu, India. It was authentically verified by Ms. M. Shanthi, M.Sc., M. phil., Ph.D., Botanist, Department of Botany, S.F.R.college of arts and science, Sivakasi. A voucher specimen has been kept in the herbarium of this institute for future reference.

Preparation of Extracts: The whole plant 4 kg of Ageratum conyzoides after the collection was washed in running tap water to remove the soil and adhering materials, shade dried. Dried materials were coarsely powdered before extraction and placed in a 2 liter RBF. The powdered crude drug was allowed for cold maceration process for 72 h for each solvent like petroleum ether, ethyl acetate, ethanol, and water. Then the extracted compounds were concentrated by distillation and solvent was evaporated to dryness. Then the final products were dried in a vacuum desiccator containing anhydrous calcium chloride. The dried products were weighed and the percentage yield was calculated. The color consistencies of the extracts were noted18.

Drugs: The urolithiasis inducing agent, Ethylene glycol was also purchased from ponmani chemical agencies, Madurai. The standard drug for screening anti-urolithiasis activity is calculi which was purchased from the local market in Sivakasi.

Ethylene Glycol Induced Urolithiasis in Rats: The method of Mitra et al., was employed for the assessment of anti-urolithiasis activity 20. Twenty four albino rats of sex (150-250gm) were taken. They are divided into six groups of four rats each.

Ethylene Glycol Induced Urolithiasis Model: This study is designed to find out the effect of Ageratum conyzoides (AC) on therapeutic usage against ethylene glycol induced urolithiasis 21, 22.

Group I: Positive control group treated with the only vehicle

The all animals except Group-I urolithiasis were induced by the administration of 5% Ethylene glycol of a dose of 2ml/rat for 7 days.

Collection and Analysis of Urine: One day after 7 day treatment 24 h urine sample was collected, and calcium, phosphate, and oxalate were determined. All animals were kept in individual metabolic cages, and urine samples of 24 h were collected on 8 days. Animals will be having free access to drinking water during the urine collection period. The total volume of urine collected was measured for both control and drugs treated groups. Urine was stored at 4 °C and analyzed for calcium, phosphate, and oxalate content.

Kidney Homogenate Analysis: After the experiment period, the animals were sacrificed. The abdomen was cut open to remove both kidneys form each animal. Isolated kidneys were carefully removed and cleaned off extraneous tissue, washed in ice-cold 0.15m kcl. Kidney of each animal was homogenized in normal saline. The homogenate was centrifuged at 3000rpm for 10 min, and the supernatant was separated. The calcium, phosphate, and oxalate content in kidney homogenate were determined 24.

The detailed result of the phytochemical tests carried out on the whole plant of Ageratum conyzoides was presented in Table 1.

The results obtained in this study indicate that the model selected for inducing urolithiasis, i.e. ethylene glycol is suitable and reproducible. Urinary stone formation takes place due to change in urinary chemistry such as hypercalciuria and hyperoxaluria, leading to super urinary saturation which later crystalizes, aggregates and ends up in stone formation.

In the present study, an increase in deposition of calcium (134%) and oxalate (50%) in the kidney was observed in 5% ethylene glycol administered albino rats when compared to the normal. The increase in calcium deposition in the kidney and its urinary excretion may be due to an effective renal tubular reabsorption. Administration of aqueous, ethyl acetate and ethanolic extracts of Ageratum conyzoides Linn (500mg/kg, P.O) statistically reduced. Calcium (50%) and oxalate (37%) deposition respectively in the kidney in 5% ethylene glycol administered albino rats. The plant extracts such as aqueous, ethyl acetate, and ethanolic attenuated the urinary excretion of calcium oxalate without affecting the phosphate concentration in 5% ethylene glycol administered albino rats Table 2. 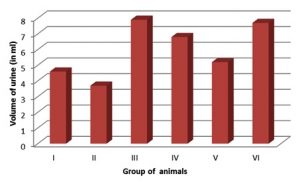 DISCUSSION: The preliminary phytochemical studies such as determination of percentage yield color and consistency of various extracts of Ageratum conyzoides helps to fix up the standards for the plant. Identification of phytoconstituents present in various extracts helps to find out the nature of phytoconstituents. The phytochemical test can be used to identify and differentiate Ageratum conyzoides from other related species. Also, these preliminary phytochemical parameters help in the detection of adulteration in commercial samples.

In spite of advances in the understanding of urolithiogenesis, there is a lack of satisfactory drug treatment of the “idiopathic” oxaloacic stone formers (hyper calciuria or hyper oxaluria). This might be due to many causes that provoke the disease in a non-uniform group of patients. Thus, the genesis of calculus is attributed to a deficit of crystallization inhibitors (nucleation inhibitors) and increase of promoters (heterogenous nucleation) 25. Rat is the suitable animal model for the present study because the urinary system of rat resembles that of humans 26. In this experiment, Urolithiasis induced by the rats were continuously administered by 5% ethylene glycol (2ml/rats/p.o/7days) for the rapid screen the anti-urolithiasis activity.

The appearance of calcium oxalate in renal tubules following ethylene glycol injected is associated with necrosis of tubular cells, which results in exposure of tubular, basal lamina and formation of luminal cellular debris.

The calcium oxalate crystals do causes cytolysis of polymorphonuclear leukocytes following phagocytosis and may be destructive to the renal epithelium. Ethylene glycol challenge brings about a rapid increase in urinary excretion of calcium oxalate and formation of crystals takes place. These crystals deposit progressively in the cortex, medulla, and renal tubules.

In the present study, the increased severity of kidney crystal deposition after seven days of treatment with ethylene glycol correlated well with increased calcium oxalate concentration in the kidney Table 3.

The treatment of calculi, aqueous, ethyl acetate and ethanolic extracts of Ageratum conyzoides caused significant reduction of calcium oxalate excretion and calcium oxalate in the kidney Table 2 and 3. Suggested their beneficial effects against calcium oxalate deposition in urolithiasis.

Tannins, saponins, and flavonoids present in the extract these may be responsible for the reduction in supersaturation of oxalate in tissue by diuretic or protection of cells 27. Determination of the exact mode of action is the subject of further research interest.

ACKNOWLEDGEMENT: The author is thankful to Dr. A. Thanga Thirupathi, Professor, for his guidance, A. Alageswaran, K. Sheejadevi, V. Sreedevi, and S. B. C. P. management for providing the necessary facilities and help to carry out this research work.