ABSTRACT: We have developed a novel LAMP-based molecular marker for easy and fast identification of Podophyllum hexandrum Royle (Indian May apple). It is an important medicinal plant valued all over the world. It have both anti-cancer (pro-oxidant ability) and radioprotective (antioxidant ability) effects respectively. The LAMP-based molecular was constructed based on genomic DNA of P. hexandrum that amplified by RAPD. A RAPD amplicon common to all accessions, was eluted, cloned and sequenced. Based on these sequences in-house specific LAMP primers were synthesized. This method employs by a Bst DNA polymerase and a set of four specially designed primers that recognize a total of six distinct sequences on the P. hexandrum genomic DNA. In LAMP reaction the amplification was carried out in thermal cycler and water bath at 60°C for 60 min, which was followed by monitoring DNA amplification with the naked eye through color changes by standardizing SyBr Green® I nucleic acid stain. The data showed confirmatory results in both thermal cycler and water bath. Since, the assay method is sensitive and cost-effective; it is a feasible method for identifying and authentication of P. hexandrum.  Due to its specificity and simplicity, the method could become a useful tool for identification and authentication medicinal plants.

Among these lignans, podophyllotoxin is most important for its use in the synthesis of anti-cancer drugs etoposide, teniposide and etophos 4. These compounds have been used for the treatment of long and testicular cancers as well as certain leukemias 5, 6.

Presently, P. hexandrum (an Indian species) and P. peltatum L. (an American species) are the commercial source of podophyllotoxin for the pharmaceutical industry. However, the Indian species P. hexandrum contain 3 times more podophyllotoxin than the American species P. peltatum 7, 8 adding more to the importance of P. hexandrum. It also has numerous applications in modern medicine by virtue of its free radical scavenging capacity. However, it commonly in physiology areas and it is difficult to distinguish them accurately through morphological and physiological features. Therefore, it would be very important to search for a simple and effective method to distinguish these commercial species of the superior type from other commercial species.

Genetic tools that use hybridization, polymerase chain reaction (PCR), and sequencing techniques provide more objective and reliable methods for authenticating herbal medicines 9, 10. RAPD analysis has become one of the most effective methods for estimating genetic diversity in plant populations or cultivars because it can reveal high levels of polymorphism. However, it is less reproducible than other methods 10, 11 and also has many advantages, such as its high speed, low cost, and requirement of minute amounts of plant material 12, 13, 14 used RAPD analysis to develop SCAR markers, a more accurate and reliable technique.

This technique can be used to develop markers that authenticate herbal medicines by using specific PCR primers derived from RAPD or AFLP fragments. A SCAR marker was detected by PCR using specific oligonucleotide primers designed based on the sequence data of one RAPD or AFLP fragments and following PCR amplification under more stringent conditions. SCAR markers also need the analysis of gels, time-consuming and sophisticated PCR machine.

LAMP requires two specially designed inner and two outer primers to perform the amplification of the target gene, as such, LAMP amplifies DNA with high specificity, efficiency, and rapidity the amplification uses a single temperature step at 60–66 °C for about 30-60 min, simple incubators, such as a water bath or block heater, are sufficient for the DNA amplification, and the amplification products have many types of structures in large amounts.

Thus, LAMP is faster and easier to perform than PCR, as well as being more specific. Furthermore, gel electrophoresis is not needed, LAMP products because the LAMP products can be detected indirectly by the turbidity that arises due a large amount of by-product, pyrophosphate ion, being produced, yielding an insoluble white precipitate of magnesium pyrophosphate in the reaction mixture 17, 18.

Fresh leafs of mature plants were collected from Uttarakhand (West Himalaya) state of India (Table 1). The leaf samples were frozen in liquid nitrogen and stored at –20°C until used for DNA isolation

The suspension was gently mixed and incubated at 60°C for 60 min with occasional mixing. The suspension was then cooled to room temperature and an equal volume of chloroform: isoamyl alcohol (24:1) was added. The mixture was centrifuged at 13000 x g for 10 min. The clear upper aqueous phase was then transferred to a new tube containing 0.5 mL ice-cooled isopropanol and incubated at –20 °C for 30 min. The nucleic acid was collected by centrifuging at 13000 x g for 10 min. The resulting pellet was washed twice with 70% ethanol containing 10mmol/L ammonium acetate. The pellet was air-dried under a sterile laminar hood and the nucleic acid was dissolved in TE (10 mmol/L Tris buffer, pH 8.0, 1 mmol/L Na2EDTA) at 4 °C.

The contaminating RNA was eliminated by treating the sample with RNase A (20μg/μL) for 30 min at 37°C. DNA concentration and purity were determined by measuring the absorbance of diluted DNA solution at 260 nm and 280 nm. The quality of the DNA was determined using agarose gel electrophoresis stained with ethidium bromide.

APD markers suffer from a lack of reproducibility. Consequently, to confirm the electrophoretic patterns and the obtained polymorphic bands, every PCR was repeated twice under the same conditions of composition of reaction volume, amplification profile and thermalcycler.

A band of 429 bp, which is common in all the six accessions, was excised from gels and eluted using a Gel Extraction Kit (QIAGEN, Germany). The eluted DNA was cloned into pGEM®-T easy vector (Promega, USA) following the manufacturer’s instruction. The ligated plasmid was introduced into Escherichia coli strain DH5α, following the protocols for preparing competent cells and transformation using the calcium chloride method 21. White colonies were picked from LB-X-gal plates and grown overnight in LB medium containing ampicilin.

The plasmid DNA was isolated from the bacterial culture using plasmid isolation kit (QIAGEN, Germany). The inserted fragment was sequenced at The Center for Genomic Application, New Delhi, India with T7 primer. Nucleotide sequence of 429 bp was identical for all the six accessions. This sequence was used for designing primers for LAMP reaction.

Four oligonucleotide primers, forward inner primer (FIP), back inner primer (BIP), and two outer primers (F3 and B3), were designed by using the sequence of DNA from 429 bp RAPD amplicon. All primer sequences were designed with the software program Primer Explorer V3 (http://primerexplorer.jp/elamp3.0.0/index.html).

The inspection for amplification was performed through observation of a color change following addition of 1µl (1:1000) of SYBR Green I dye to the tube. This color was visualized by naked without any UV source and produced florescence in under UV transillumenator.

RAPD method was performed in search for DNA polymorphisms, which can be used for generating informative LAMP-based molecular markers and defining the individual cultivars. Twenty five RAPD primers were used. Only the fragments confirmed by repeated amplifications were considered useful for generating LAMP-markers. Preliminary screening of 25 random decanucleotide primers showed that nineteen primers were able to prime genomic DNA of P. hexandrum, and resulted in amplified PCR products of a variable number of DNA bands (09-43 bands per primer) (Table 2). A total of 460 DNA bands were obtained (Table 3).

TABLE 2: NUMBER OF AMPLIFICATION PRODUCTS, FRAGMENTS SIZE, NUMBER OF POLYMORPHIC BAND AND NUMBER OF MONOMORPHIC BAND WITH 25 ARBITRARY PRIMERS IN ALL THREE ACCESSION OF P. HEXANDRUM

Amplification of P. hexandrum species with OPAA-02, OPAA-03, OPAA-04, OPAA-05 and OPAA-06 produced good quality, reproducible fingerprint patterns and showed a high level of consistency of fingerprints among samples of the same species collected from different localities (Fig. 1). Several specific RAPD fragments of high intensity and reproducibility were eluted, cloned and sequenced. Nucleotide sequence of 429 bp amplicon (Fig. 2A), identical for all the three accessions of P. hexandrum, was used for designing primers for LAMP reaction (Fig. 2B).

TABLE 3: NUMBER OF AMPLIFICATION PRODUCTS AND FRAGMENTS SIZE WITH 25 ARBITRARY PRIMERS IN ALL THREE ACCESSION OF P. HEXANDRUM 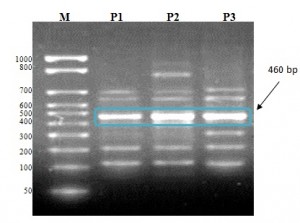 FIG.1: RAPD ELECTROPHORESIS PROFILE OF P. HEXANDRUM AMPLIFIED WITH OPAA-09 PRIMERS. LANES 1–3 CORRESPOND TO THE ALL THREE ACCESSIONS. LANE M, MOLECULAR MARKER 50-1000 bp (BIO BASIC INC, CANADA). THE NUMBERS ON THE LEFT SIDE OF THE FIGURE INDICATE THE DNA SIZE MARKERS IN BASE PAIR (bp). 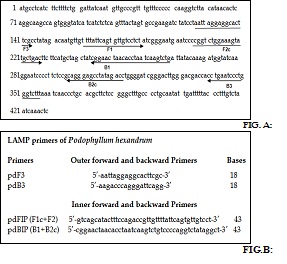 The LAMP reaction relies mainly on autocycling strand displacement DNA synthesis that is similar to the cascade rolling-circle amplification reported by 22. The minimum LAMP reaction unit consists of two outer (F3 and B3), two inner primers (FIP and BIP) and target DNA. Each inner primer contains two distinct sequences corresponding to the sense and antisense sequences of the target DNA and form stem-loop structures at both ends of the minimum LAMP reaction unit. These stem-loop structures initiate self-primed DNA synthesis and serve as the starting material for subsequent LAMP cycling reaction. The LAMP products were visualized on a UV transilluminator at 302 nm (Fig. 3) and naked eye without using any UV source (Fig. 4).

DISCUSSION: P. hexandrum has been studied extensively in India because of its wide-spread used in herbal medicine all over the world. We have developed a credible and convenient LAMP-based marker for the identification of P. hexandrum. Molecular marker technology proves to be valuable tools for genotyping medicinal plants and detecting adulterations and substitutions in herbal medicine. The LAMP-based markers obtained from this study are useful for identifying three morphologically similar herbaceous species of P. hexandrum. Using DNA markers developed in this study, P. hexandrum, the most widely used in traditional medicine can be efficiently differentiated from P. hexandrum, which is used to a much lesser extent and also from the least known P. hexandrum.

The LAMP operation is quite simple; it starts with the mixing of buffer, primers, DNA lysates, and DNA polymerase in a tube, and then the mixture is incubated at 65°C for a certain period. For the visualization of product, SYBR Green I was added. The tubes can also be inspected for white turbidity with the naked eye after a pulse spin to deposit the precipitate in the bottom of the tube 18. However, detecting a small amount of the white precipitate by the naked eye is not always easy; therefore, the detection limit is apparently inferior to that of electrophoresis. To increase the rate of recognition by the naked eye, addition of SYBR Green I to the reaction solution is convenient 23.

LAMP amplification is rapid (results can be obtained in less than 1 h), easy to perform and low in cost. Because of to its easy operation without any sophisticated equipment, it will be simple enough for use in small-scale industries, hospitals, and testing laboratories in developing countries. The molecular based identification is especially useful when botanical identification based on morphology becomes difficult, such as in the case of incomplete or damaged samples, and in dried herbal products.