An efficient, cost effective use of Raney nickel (R-Ni) a widely used industrial catalyst for N-Alkylation using alcohols is highlighted here. The work describes the scope and capability of R-Ni in borrowing hydrogen reactions for Aniline and Benzyl alcohol. The reaction optimization is described using two techniques, Conventional and Design of experiment. The use of DOE for reaction optimization is an unique option described in this paper.

INTRODUCTION: Synthesis of Pharmaceuticals is becoming an enormously tedious assignment for Chemical and Pharmaceutical industry. The increased regulatory framework along with increasing environmental awareness it is now essential to re-examine the established strategy of synthesis leading to utilization of toxic chemicals, solvents and process hazards. Keeping the environmental aspects in mind, it is necessary not only to maximize the chemical yields but also to minimize the waste production and ideally to eliminate it. Borrowing hydrogen reaction is an attractive alternative to overcome the drawbacks of conventional synthetic methodology by taking the environmental aspects in account.

The process uses alcohols as direct alkylating agents for amines. 1 It is a one-pot version of the reductive amination reaction as shown in Scheme 1, here the oxidation of the alcohol to aldehyde and reduction of the imine subsequently formed can be catalyzed by a single catalyst. The reaction involves initial oxidative hydrogen elimination, to give the aldehyde followed by condensation with the amine to yield a Schiff base, and is completed with a reductive hydrogen addition to give the final product.2, 3

In comparison to the conventional methods, 4 this methodology has advantage of simple reaction set up, no use of external hydrogen source, use environmentally benign and easily available alcohols as electrophiles, water produced as the only waste material, selectivity of the reaction can be establish with catalyst and also reduce number of synthetic steps.

The reaction of autohydrogen transfer was first reported in the 19th century using nickel as a catalyst for alkylation of aliphatic amines with primary alcohol. 5 After that an enormous number of catalytic systems were developed and optimized. In the following Figure 1 is an attempt has been made to categories the literature based on the catalyst system used. On compiling the different reviews and articles on autohydrogen transfer, it was observed that the scope of reaction and its application has been extensively studied by the use of noble metals, wherein Ruthenium derived catalyst systems dominate. 6 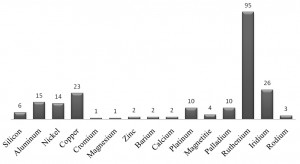 With the evidence of activity with nickel, and the lack of literature on it and noticeably the huge difference in cost motivated us to study nickel mediated autohydrogen transfer. 7-9 We chose W4 Raney nickel (R-Ni) grades for studying the model reaction of N-alkylation of Aniline with Benzyl alcohol.

Preparation and Characterization of R-Ni:

Preparation of W4 was done by continuous slow addition of Ni-Al alloy (50:50) to sodium hydroxide solution (26%) over the period. The reaction was further digested in same solution. The resultant suspension was centrifuged. The obtained R-Ni cake was washed till pH 7.

The prepared grade was characterized for its nickel and aluminum content, followed by X-Ray fluorescence (XRF) and particle size as summarized in Table 1.

The variables selected for conventional reaction optimization include W4 R-Ni concentration, alcohol concentration, temperature and solvent effect. The results of varying the above parameters are summarized in Table 2. Since the reaction hypothesis suggest that it is catalyst driven the primary reaction affecting parameter studied was catalyst concentration. The reaction of Aniline and Benzyl alcohol in 1:4 molar ratios was studied over four catalyst concentration. The results as summarized in Table 2, entry 1-4 suggest that as the concentration of the W4 increase in the reaction mixture the reaction turnover also increases with increasing formation of N-benzyl aniline. This phenomena can be explained with an assumption that more R-Ni better the adsorption of hydrogen generated by dehydrogenation of alcohol. Since 4g of catalyst gave a good yield of 85% of 3, further increasing concentrations of catalyst were not studied.

The reaction with polar aprotic solvents like N-Methyl pyrrolidone (NMP), DMF, and DMSO; deactivate the catalyst with very low yields of 4 and a major portion of starting material was recovered unreacted Table 2 (Entry 14-16). The use of xylene as the reaction solvent resulted in best yield of 3 with selectivity, Table 2 (Entry 10). 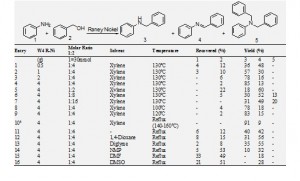 The results summarized above indicate the optimum conditions for model reaction of aniline and benzyl alcohol were as follows: Aniline (30mmol), Benzyl alcohol (120mmol), W4 R-Ni (4g), Xylene, Reflux, 24hours. The above obtained results are based on traditional approach of optimizing one variable at a time. This approach may fail to take into account to interaction between the variables or may lead to different conclusions depending on the starting point. The results obtained by such method lead to stable condition but may not necessarily be optimum and efficient. Thus to further optimize the reaction conditions statistical tool of design of experiments was applied. Design of experiment enables to determine simultaneously, individual and interactive effect of many factors that could affect the output result in any design. As defined by ICH guidelines "A structured, organized method for determining the relationship between factors affecting a process and the output of that process." 10 The process of optimization of reaction using DOE, can be achieved by following steps.

Firstly by selecting factors that are most influential, followed by their most appropriate values/ranges. The factor sets are then compared over common response by selecting an experimental design. The DOE software is used to run the analysis and give the best fit countor plot wherein the results of the factors are optimum. The concentration of Benzyl alcohol and W4 R-Ni in the reaction were selected as the most influencing factors affecting synthesis of N-Benzyl aniline. These factors were simultaneously evaluated over the same range as in conventional optimization. On feeding the ranges into the DOE software, experimental conditions were generated. The results obtained after practical experimentation were fed into DOE software to obtain the best fit countor plot.

The Figure 2, below shows the countor plot wherein the yellow  highlights the area indicating, the region where on reaction of aniline and Benzyl alcohol the N-benzyl aniline  product will be obtained from 85%- 99%, and the impurity will range from 2%-10%. The figure shows that at lower concentration of W4 R-Ni the yield of N-benzyl aniline decreases and impurities yield is high. Similarly, at lower and higher concentration of benzyl alcohol yield of impurities increases. 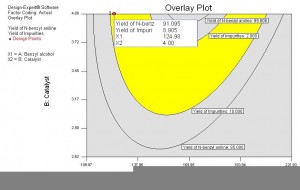 CONCLUSIONS: The current work has demonstrated a new role for R-Ni, an old widely used reduction catalyst. The W4 grade of R-Ni in the same reaction that is capable of both dehydrogenation and hydrogenation. The neutral conditions, wide scope of reaction, and the relative reactivities of amines and alcohols in this methodology suggest that Borrowing hydrogen reaction is probably one of the best potential reactions not only from a chemical point of view but also from an economical and environmental consideration. Along with this reaction the use of DOE to optimize reactions will act as a new approach to changing R&D Landscape where there is a need to do more, with less. Quality by Design (QbD) Movement is here to stay where DOE can create the requisite design space satisfying increasing popularity of Green Chemistry Initiatives

IR spectra were recorded on a Perkin-Elmer FTIR spectrometer Spectrum RX1, Software Spectrum with only selected absorbance quoted as ν in cm-1. NMR spectra were run in DMSO or CDCl3 on Jeol 400-MHz NMR spectrophotometer with multiple probe facility for 1H, 11B, 13C, 17O, 19F, 31P instrument model JNM-400 and recorded at the frequency of 1H – 400MHz. The following abbreviations are used: s-singlet, d-doublet, t-triplet, app.t- apparent triplet, q-quartet, app.q-apparent quartet, dd-doublet of doublets, m-multiplet and br-broad. Structural assignments of protons were achieved with comparisons from analogous literature compounds; references are given in most cases.  A microTOF electrospray time-of-flight (ESI-TOF) mass spectrometer (Bruker Daltonik GmbH, Bremen, Germany) was used; this was coupled to an Agilent 1200 LC system (Agilent Technologies, Waldbronn, Germany). The LC system was used as an auto sampler only. 10μL of sample was injected into a 30:70 flow of water: acetonitrile at 0.6mL/min to the mass spectrometer. The observed mass and isotope pattern perfectly matched the corresponding theoretical values as calculated from the expected elemental formula. Particle size distribution of the alloy was estimated using Sieve analysis conducted on Electromagnetic Sieve shaker by ElectroPharma, EMS-8 and the particle size of the prepared grades was estimated on Cilas Particle Size analyzer, 990L, Size expert 9.30.

Representative procedure for alkylation of Amine with Alcohol:

Activation of the catalyst:

The prepared grades of R-Ni were weighed in water after considering its specific gravity. The residual water was removed using dean stark apparatus.  All the reactions were carried out in a 2-neck round bottom flask, attached with a condenser. Typically, reaction was carried out by stirring and refluxing the reaction mixture of amine and alcohol with pretreated R-Ni in 20ml solvent. After reaction completion, reaction mixture was cooled and filtered using Whatmen filter paper #40. The solvent was removed in-vacuo. The mixture thus obtained was purified using column chromatography. The purified compounds obtained were characterized by IR, NMR, LC-MS and melting or boiling point. The analytical data obtained of the known compounds are in agreement to the reported literature.

ACKNOWLEDGMENTS: The authors would like to thank Ambernath Organics Pvt. Ltd. for sponsoring the project and Monarch catalyst Pvt. Ltd. for catalyst characterization.