ABSTRACT:Medicinal plants have been reported to play an important role in modulating glycemic responses. Several mechanisms have been proposed for the anti-diabetic effect of medicinal plants such as inhibition of carbohydrate metabolizing enzymes, manipulation of glucose transporters, β- cell regeneration and enhancing insulin releasing activity. In the present study, the hypoglycemic potential of Artocarpus altilis leaves (AL), bark (AB) and fruit (AF) parts were investigated using suitable in-vitro and ex-vivo techniques such as glucose adsorption, glucose diffusion retardation index (GDRI), inhibition of enteric enzymes à α- amylase, α- glucosidase, sucrase and effect of selected samples on glucose uptake using yeast cell as model system. The cold and hot aqueous extracts of AB significantly (P ≤ 0.05) inhibited the activity of all the three enzymes followed by AL and AF, while ALP and ABP enhanced the activity of α- glucosidase. ALP enhanced the glucose uptake by yeast cells significantly (P ≤ 0.05) followed by ABP and AFP, which was dependent on glucose concentration.The results suggest that the possible mode of action of Artocarus altilis as hypoglycemic agent is by glucose adsorption, inhibiting carbohydrate metabolizing enzymes and by facilitating the glucose diffusion through cell membrane. Hence, there is further scope to explore Artocarpus altilis as a therapeutic agent in the management of type II diabetes.

INTRODUCTION:Diabetes mellitus is a metabolic disorder of multiple etiology characterized by chronic hyperglycemia resulting in decreased insulin action/sensitivity or decreased insulin secretion from pancreatic β-cells 1. The management of diabetes without any side effects is still a challenge to the medical system because the therapies available currently for diabetes include insulin and various oral anti-diabetic agents which are associated with many adverse effects.

This has necessitated the exploration and screening of medicinal plants with acclaimed therapeutic efficacies in DM management. Wide number of traditional medicinal plants is being used in the treatment of diabetes, particularly in developing countries and it is essential to screen the anti-diabetic potential of these plants using various in-vitro, ex-vivo and in-vivo model systems prior to human clinical trials.

More than 200 pure compounds from plant sources are reported to exhibit blood glucose lowering activity 2. Studies indicate that a variety of mechanisms of action are likely to be involved in lowering hyperglycemia such as inhibition of carbohydrate metabolizing enzymes, manipulation of glucose transporters, β-cell regeneration and enhancing insulin releasing activity 3.

Medicinal plants, since time immemorial have been in use for the treatment of various diseases all over the world 4. Herbal drugs are prescribed widely even when their biologically active compounds are unknown, because of their effectiveness, less side effects and relatively low cost 5. Artocarpus altilis belong to Moraceae family, a tree of moderate size, is widely cultivated in tropics as staple crop, construction material and animal feed. Its leaves have been used traditionally for the treatment of liver cirrhosis, hypertension and diabetes 6.

Collection and preparation of samples: The leaf, bark and fruit parts of Artocarpus altilis were collected from Mysore district of Karnataka, Indiaand subsequently identified by Dr. G. R. Shivamurthy, Department of Studies in Botany, University of Mysore, Mysore, India. The samples were thoroughly washed under running water to remove adhering dirt and other foreign particles from the surface, dried overnight (500C), powdered, passed through 60 mesh sieve (BS) and stored in airtight container at 4oC till further use.

The glucose-adsorption capacity of the samples was determined according to the method of Ou et al 8. Briefly, 1% of samples were mixed with 25ml of glucose solution (5, 10, 20, 50 & 100 mM/L), vortexed and incubated in a shaker water bath at 370C for 6 h, centrifuged at 4000 g for 20min. The glucose bound was calculated using the following formula;

Weight of the sample

Effect of samples on in-vitro Glucose Diffusion: The effect of samples on in-vitro glucose diffusion was determined according to the method of Ou et al 8. Glucose dietary fiber system comprising of samples (1%) and 25 ml of glucose solution (20 mML-1) were dialyzed against 200 ml of distilled water at 370C in a shaker water bath. The glucose content in the dialysate was determined after 30, 60, 120 and 180 min by the glucose oxidase peroxidase diagnostic kit for the estimation of glucose diffusion retardation index (GDRI) as a function of time. A control test was done without the addition of plant sample.

Effect of samples on in-vitro Amylolysis Kinetics: The effect of various plant samples on starch digestibilitywas determined by the method of Ou et al 8.

Preparation of enzyme solution (α-glucosidase & sucrase) from rat small intestinal brush border: The crude enzyme solution was prepared by the method of Dahlqvist 9. Wistar rats weighing 140-160 grams were fasted overnight, sacrificed by cervical dislocation and the small intestines were immediately excised. The intestines were washed with ice cold maleate buffer (pH 6.0, 0.1M); the brush border was carefully removed and homogenized with maleate buffer (1:5 w/v) in cold condition. The homogenate was then centrifuged for 15 min (10,000 g, 4°C) and the supernatant was used as crude enzyme source of α-glucosidase and sucrase. All animal procedures have been approved by the Animal Ethical Committee of University of Mysore in accordance with animal experimentation and care.

Assay of α -glucosidase inhibitory activity: The effect of various samples on α -glucosidase activity was assayed according to the procedure of Honda and Hara 10. The rat intestinal brush border enzyme solution (10 μl) and the sample emulsion (10 μl) were incubated together with 200 μl maleate buffer (pH 6.0) for 10 min at 37°C. The enzyme reaction was started by adding 200 μl of p-nitrophenyl-a-D-glucopyranoside (NPG) solution (2 mM) and incubated at 37°C. After 30 min, the reaction was terminated by treating the mixture in a boiling water bath for 5 min. After the addition of 1.0 ml of disodium hydrogen phosphate solution (0.1 M), the absorbance of the liberated p nitrophenol was read at 400 nm. An untreated enzyme solution was used as the control.

Assay of Sucrase inhibitory activity: The effect of various samples on sucrase activity was assayed according to the procedure of Honda and Hara 10. The rat intestinal brush border enzyme (10 μl) and the sample emulsion (10 μl) were incubated together with 180 μl maleate buffer (pH 6.0) for 10 min at 37°C.

The enzyme reaction was started by adding 100 μl sucrose solution (60 mM). After 30 min, the reaction was terminated by adding 200 μl of 3,5- dinitrosalysilic acid reagent and treating the mixture in a boiling water bath for 5 min. The absorbance of the solution was read at 540 nm. An untreated enzyme solution was used as the control. The percent inhibitory activities of α-glucosidase and sucrase were calculated using the following formula.

Effect of samples on glucose uptake/transport by yeast cells:

Various concentrations of the aqueous extracts (2 and 4 mg) were added to 1 ml of glucose solution (5, 10 and 20 mM) and incubated together for 10 min at 37°C. Reaction was started by adding 100 μl of yeast suspension, vortex and further incubated at 37°C for 60 min. After 60 min, the tubes were centrifuged (2500 g, 5 min) and glucose was estimated in the supernatant 11. The percent increase in glucose uptake was calculated using the following formula;

Statistical Analysis: All determinations were carried out in triplicates and the data was subjected to one way ANOVA followed by Tukey’s multiple comparisons test for significant difference (P ≤ 0.05) using SPSS 11.5 software. 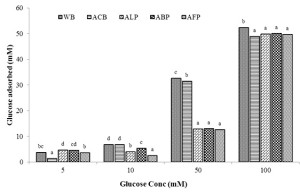 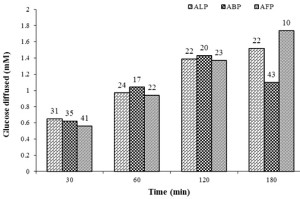 Effect of samples on in-vitro amylolysis kinetics: The effect of samples on the diffusion rate of glucose and GDRI in the Starch - α-amylase - fiber system is shown in Figure 3. The diffusion rate of glucose in Control was significantly (P ≤ 0.05) lower than the samples at each interval of time. The maximal GDRI was exhibited by guar gum (GG) at all-time intervals. At 60, 180 and 240 min the GDRI was maximum in GG, followed by WB, ABP, ALP and AFP. The GDRI values of all the samples decreased as the time increased in the systems where glucose-samples/fiber were used. 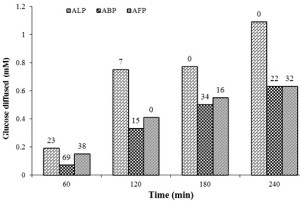 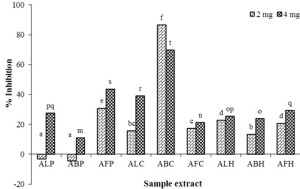 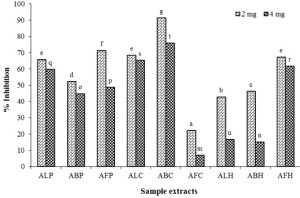 Effect of samples on glucose uptake/transport by yeast cells: The effect of the A. altilis samples on glucose transport across cell membrane was studied in-vitro system comprising of yeast cells suspended in glucose solution of varying concentration (10 and 20 mM) in the presence of the extracts at different concentrations (Figures 6a & 6b). The amount of glucose remaining in the medium after a specific time serves as an indicator of the glucose uptake by the yeast cells. All the sample extracts enhanced the glucose transport across yeast cell membrane. 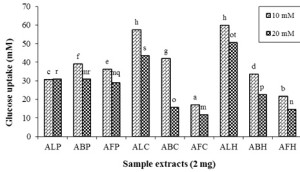 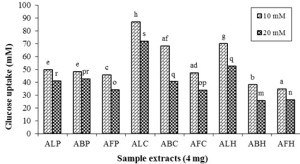 DISCUSSION: In effective management of type 2 diabetes, the blood glucose levels should be maintained close to normal level. Over 400 plants have been documented with potential hypoglycemic activity; however they have yet to be scientifically and medically evaluated. Several studies have proved the beneficial effect of plant fibers for control of blood glucose concentrations 12. In the present study, the increased ability of the samples to adsorb glucose may be attributed to the dietary fiber (insoluble and soluble fibers) present in the sample 13-15.

Similar observations are reported for insoluble fiber-rich fractions isolated from Averrhoa carambola 14. It was hence speculated that the samples might help retain the glucose in the intestinal lumen even at a low glucose concentration. In addition to glucose adsorption, the retardation in glucose diffusion might also be attributed to the physical obstacle presented by fiber particles toward glucose molecules and the entrapment of glucose within the network formed by fibers 16, 18.

Inhibitors of carbohydrate- metabolizing enzymes - α-amylase, α-glucosidase and sucrase delay carbohydrate digestion causing a reduction in the rate of glucose absorption and consequently blunting the postprandial plasma glucose rise hence, play an important role in controlling postprandial blood glucose levels 19. The inhibition of enzymes activity by medicinal plants might be attributed to several possible factors such as fiber concentration, the presence of inhibitors on fibers, encapsulation of starch and enzyme by the fibers present in the sample, thereby reducing accessibility of starch to the enzyme, and direct adsorption of the enzyme on fibers, leading to decreased enzyme activity 8, 20.

Apart from glucose adsorption, retarded diffusion and inhibition of carbohydrate metabolizing enzymes at gut level, one more proposed mode of action is uptake of glucose by cells through facilitated diffusion which is demonstrated by yeast cell model system. The mechanism of glucose transport across the yeast cell membrane has been receiving attention as an in-vitro screening method for hypoglycemic effect of various compounds/ medicinal plants 1.

In this study, it was observed that as the sample and glucose concentration increased, the glucose uptake by yeast cells also increased; however, this relationship will cease to exist once the yeast cells reach a saturation point. It is reported that in yeast cells (Saccharomyces cerevisiae), glucose transport is extremely complex, and it is generally agreed that glucose is transported in yeast by a facilitated diffusion process. The effective transport of intracellular glucose into the cells is attained through facilitated carriers which are specific carriers that transport solutes down the concentration gradient 22.

Along with the presence of fiber, studies suggest the potential of phytochemicals in combating diabetic disorders, for which several mechanisms have been proposed, such as inhibition of carbohydrate metabolizing enzymes, manipulation of glucose transporters, β-cell regeneration, and enhancing insulin releasing activity 3.

CONCLUSION: Many plant derived drugs have been developed which are more effective and less toxic. Scientific validation using appropriate in-vitro, ex-vivo and in-vivo techniques is essential to understand the mode of action, establish the biological and pharmacological effects of traditional medicinal plants. The present study is the first ever scientifically reported work suggesting the possible mechanism of glucose lowering action of Artocarpus altilis - leaf, bark and fruit, which are by binding glucose, inhibiting α- amylase, α- glucosidase and sucrase activities and also through facilitating the diffusion of glucose across cell membrane as evidenced by using yeast cell as model system. Further animal studies are underway to confirm these observations.

Conflict of Interest: Authors declare no conflict of interest.