INTRODUCTION: There are many generic ayurvedic formulations described in age old treatises. Chavanprash is the only semisolid dosage form taken internally is used since ancient times. Ghritas 1 avalehas 2 and asavarishtas have a unique place in health benefits. Asavarishta is very popular liquid dosage form due to lightness, quick absorbability, glossiness and rapid action 3. A wide variety of herbs can be incorporated in it to give the desired therapeutic effect. Dashamularishta 4 is used in normalization of physiological processes after child birth in woman in treatment of piles and to enhance immune system. Drakshasava is a general tonic. Kutajarishta is used in treatment of diarrhoea and dysentery. Chandanasava is used in urinary disorders, in treatment of autoimmune diseases and Ashokarishta in female uterine diseases, menstrual disorders and vaginal diseases. Kumaryasava 5 is used in treatment of liver disorders, Ashvagandharishta as general tonic, Arvindasava as a paediatric tonic and Lohasava in the treatment of anaemia 6. Asavarishtas are clear products with acceptable taste and better compliance. Organoleptic features are improved as spices are incorporated to improve the flavor of asavarishtas and no external flavors are required. End product is comparatively sugar free.

Self generated alcohol gives excellent product stability as it acts as a preservative to the product, high rate of assimilation and excellent palatability. In asavas the cold infusion of herbs and in arishtas decoction is subjected to fermentation 7-11. Dashamularishta contains 67 herbs whereas Kumariasava contains 46 herbal ingredients. Ingredients and their proportion, process of fermentation, determination of alcohol content, phytochemical evaluation, physical and chemical tests are important parameters in preparation of asavarishtas.

Fermentation is a slow decomposition process of organic substances induced by microorganisms. Fermentation can be controlled to give beneficial results.  It is therefore highly appropriate technique in developing countries. Complex anaerobic fermentation eliminates most effects such as gas and bloating. The fermentation procedure extracts wider range of active ingredients from the herb than any extraction method since the menstrum undergoes gradient of rising alcohol levels. Dried flowers of Woodfordia fruiticosa (Dhayati flowers) 12 are used as catalyst; innoculum of yeast 13 is required to be added to increase the rate of fermentation (Fig. 1). Yeast cells swell naturally bind heavy metals and pesticidal residues and therefore act as a natural cleansing system. It can also reduce the toxicity of some of the occurring toxic products in plants. Fermentation actively ruptures the cells of herb exposing it more to the menstrum and bacteria have enzymes that break down cell walls to further assist in leaching process. Sacchromyces cerevisiae species of yeast is commonly used 14. 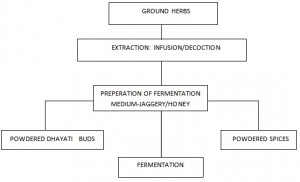 Fermentation technology is the oldest of all biotechnological processes 16. It is an enzymatically controlled transformation of an organic compound. It can be described as a biochemical change which is brought about by anaerobic or partially anaerobic oxidation of carbohydrates by either microorganisms or enzymes. Anaerobic fermentation discourages growth of vinegar producing bacteria. Fermentation can be controlled to give beneficial results.  Thus fermentation is energy yielding process in which breakdown of a nutrient molecule such as glucose takes place without oxidation. In fermentation performed by yeast- Saccharomyces cerevisiae breaks down sucrose molecules to ethanol and carbon dioxide. Carbon dioxide is released into the atmosphere. Yeast has an enzyme called zymase and this catalyses the fermentation process 17.

The chemical process of fermentation:

The chemical equation below summarizes the fermentation of glucose, whose chemical formula is C6H12O6. One glucose molecule is converted into two ethanol molecules and two carbon dioxidemolecules:

Before fermentation takes place, one glucose molecule is broken down into two pyruvate molecules. This is known as glycolysis (Fig. 2).

Glycolysis is summarized by the chemical equation: 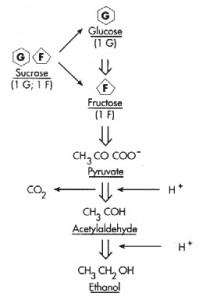 The particular strains of yeast are selected because they must grow rapidly and be tolerant to high concentrations of sugar at the same time must be able to produce required amounts of alcohol. Sugar concentration must be 10 to 18%. In greater concentration sugar becomes detrimental to yeast. The pH value of medium is adjusted to 4.8 to 5.

The temperature is set initially at 28oC to 30oc but the heat of evolution during the fermentation rises. The fermentation must take place in a vessel that allows carbon dioxide to escape, but prevents outside air from coming in, as exposure to oxygen would prevent the formation of ethanol. 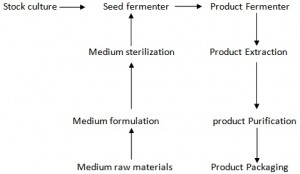 Media             for fermentation: All microorganisms require water, sources of energy, carbon, nitrogen, mineral elements. The medium should be selected in such a way that,

Liquid glucose, jaggery, sugar or honey is commonly used in combination as a fermentation media. As they are cheaper to maintain, the overall cost of the complete process. The design of fermenter depends upon media used. Microbial oxidation of hydrocarbons is a highly exothermic process. A medium with a high viscosity needs a higher power input for effective stirring. Besides meeting the criteria for growth and product formation, the medium influences pH variation, foam formation, the oxidation reduction potential. Defined media components should be used which give pure substrates and more predictable yields from batch to batch. Recovery and purification of end product becomes much simpler.

Problem of Foaming 19: Foaming is because of carbon dioxide produced by microorganisms. It is due to proteins in the medium such as yeast extract which denature at the air broth surface and form a skin which do not rupture easily. If uncontrolled numerous changes may occur in and physical and biological problems are created. Reduction of working volume of fermenter due to gas bubbles.  Foaming can be avoided by

The ideal antifoaming agent should have following properties,

Ghee is commonly used as antifoaming agent in asavarishtas.

The development of innoculum: The culture used to innoculate fermentation should satisfy the following criteria:

The design of fermenter 20: Fermenters are designed to produce the best possible growth and biosynthesis conditions and should allow ease of manipulations for all operations associated with the use of fermenters. The large vessels called fermenters or bioreactors are used which have capacity to hold thousand liters of batch.  These vessels must be strong enough to withstand the pressures of large volumes of aqueous medium. It should not get corroded by and nor deposit toxic ions in the product. Growth of containing microorganisms should be prevented or controlled.

There should be stirring arrangement in the fermentation tank as the carbon dioxide is expelled from the microbial metabolism from the product. There should be additional innoculum or seed tanks in which innoculum is produced and directly added to fermenters in order to avoid contamination problems. There must be a drain in the bottom of fermenter or some mechanism for removal of completed fermentation product from the tank. Head space plays an important role in foam control. The working volume must be reduced to facilitate better foam control. Due to large headspace volume, there is a tendency of foam to collapse under its own weight. The actual operating volume in a fermenter should be always less than that of total volume as head space must be left at the top of fermenter above the liquid medium to allow for splashing, foaming and aeration of liquid.  Usually one forth volume of fermenter is left for the head space. The covers of fermenter should be dome shaped.

Control systems: Maximum efficiency of fermentation can be achieved by continuously monitoring the variables such as pH, temperature, adequate mixing, nutrient concentration and foam formation.

Microorganisms have a definite pH range. Severe variations in environmental pH can harm microorganisms by disrupting the plasma membrane or inhibiting enzyme activity. As the microorganisms grow, they release metabolites into the medium which change pH hence pH of the medium should be continuously monitored and maintained at optimum level. There should be an arrangement for sample withdrawal for pH determination and adjusting these values during growth as required.

Heating-cooling systems can be used as per requirement to maintain the fermentation tank at optimum temperature. Adequate mixing of culture ensures optimum supply of nutrients. It also prevents accumulation of toxic metabolite byproducts.  Good mixing creates favorable environment for optimal and homogenous growth environment and good product formation. Excessive mixing may damage microbial cells and increase the temperature of medium and there is increased foam formation.

As the media used is generally rich in proteins, in agitation process it forms foam in the head space of bioreactor. To reduce the surface tension of medium antifoam chemicals qty should be optimized. Mechanical foam breakers can also be used. These devices are fitted at the top of bioreactor break the foam bubbles 22.