ASSAY OF ANTIBACTERIAL DRUG MEROPENEM IN PHARMACEUTICALS BY VOLTAMMETRIC TECHNIQUES

ASSAY OF ANTIBACTERIAL DRUG MEROPENEM IN PHARMACEUTICALS BY VOLTAMMETRIC TECHNIQUES

ABSTRACT: In present study the electro-oxidative behaviour and determination of meropenem at a glassy carbon electrode were investigated using cyclic, differential pulse anodic adsorptive stripping voltammetry (DPAAdSV) and square wave anodic adsorptive stripping voltammetric (SWAAdSV) techniques. The dependence of the peak current and peak potentials on pH, concentration and scan rates were examined. The oxidation of meropenem gave a well-defined single irreversible peak at glassy carbon electrode vs Ag/AgCl (3M KCl) reference electrode. The oxidation process was diffusion controlled. A linear response was obtained between 1.0 x10-6to 4.0x 10-5 M in aqueous media for differential pulse and square wave techniques. The recovery studies were also achieved to check sensitivity and selectivity of the proposed methods. The proposed methods were applied for the determination of meropenem from pharmaceutical dosage forms without any time-consuming extraction, separation, adsorption steps. The value of LOD was achieved 1.27x10-7 M and 2.24x10-7 M for DPAAdSV and SWAAdSV respectively.

INTRODUCTION: Meropenem (Scheme), chemically (4R,5S,6S)-3- [[(3S,5S)-5-dimethylcarbamoyl pyrrolidin-3-yl]- thio]-6-[(1R)-1- hydroxyethyl]-4-methyl-7-oxo-1- azabicyclo [3,2,0] hept-2-ene-2-carboxylic acid, is a new parenteral carbapenem antibiotic with a very broad spectrum of antibacterial activity against the majority of gram-positive and gram-negative pathogens. It is more active in vitro than imipenem against Entero-bacteriaceae and Pseudomonas aeruginosa, but less active against gram positive cocci. Meropenem is more stable to ring opening by human renal dehydropeptidase I (DHP-I) than imipenem and consequently does not require concomitant administration of a DHP- 1 inhibitor

A survey of literature has revealed several analytical methods for the determination of meropenem and its main metabolite (ICI-213689) in biological fluids, including high-performance liquid chromatography (HPLC), capillary zone electrophoresis and microbiological assay. The literature reports few methods for the quantification of meropenem in pharmaceutical dosage form. Most of reported methods require sample pre-treatment and extraction of the drug prior to the analysis 3-5.

To date, no electrochemical method is available in literature for determination of meropenem in pharmaceutical formulations. Electro-analytical methods have long been used for the determination of a wide range of drug compounds due to their simplicity, low cost, and relatively short analysis time when compared to other techniques. Additional application of electrochemistry includes the determination of electrode mechanism.6-12 Redox properties of organic molecules can give insights into their metabolic fate or their in vivo redox processes or pharmacological activity. Such use of electro-analytical measurements has found a vast of applications, including environmental monitoring, determination of a wide range of drug compounds13-19 industrial quality control and biomedical analysis20. Glassy carbon electrodes are the most common carbon-based electrodes, since they have excellent mechanical and electrical properties, wide potential range, chemically inert nature, and impermeability to gases. They are easily mounted, polishable, and compatible with all common solvents. Their performances are relatively reproducible. Thus, they offer many applications in many different areas.

Meropenem was purchased from local pharmacy under the trade name Merocrit® (Cipla) and was used without further purification. A stock standard solution of bulk Meropenem (1×10-3 M) was prepared in water and stored at 4°C until assay. The solution was next filtered through a 0.45 μm-pored Wattmann filter paper. The Working solutions (1×10-5 to 1×10-4 M) were prepared daily by appropriate dilution of the standard solution of bulk Meropenem with water just before use. A series of BR buffer of pH values 2.8 to 11 was prepared and used as a supporting electrolyte.

Model 1230A (SR 400) electrochemical analyser (CHI Instrument, USA) was employed for electrochemical techniques, with a totally automated attached to a PC with proper CHI 100W version 2.3 software for total control of the experiments and data acquisition and treatment. Athree electrode cell system was used with activated glassy carbon electrode (ø = 3 mm, CHI) as working electrode, Ag/AgCl (3 M KCl) as the reference electrode and a platinum wire as the auxiliary electrode. A magnetic stirrer (CAT.NO-1250-2 LAB-LINE INSTRUMENT, INC. USA) and a stirring bar provided the convective transport during the pre-concentration step. A digital pH-meter (CHINO- DB-1011) was used for measuring the pH values of the investigated solutions

Pre-treatment of the Glassy carbon Electrode:

The glassy carbon electrode was polished with 0.5 μm alumina powder on a polishing cloth prior to each electrochemical measurement. Then it was thoroughly rinsed with methanol and double distilled water and gently dried with a tissue paper.

10 mL of the total solution containing BR buffer of pH 3.4 and the appropriate concentration of the Meropenem was transferred into the electrochemical cell, through which a pure deoxygenated nitrogen stream was passed for 10 min to remove the oxygen gas before measurements. Electrochemical pre-treatment was always performed in the same solution in which the measurement was subsequently carried out. The accumulation of Meropenem at the working electrode was carried out for a selected time while the solution was stirred at 2000 rpm.

The stirring was then stopped and after a rest period cyclic voltammetry was initiated in the anodic direction over the range 0.6 to 1.6 V vs Ag/AgCl/KCl reference electrode at room temperature. Differential pulse anodic adsorptive stripping and square wave anodic adsorptive stripping measurements were carried out under similar conditions. Quantification of Meropenem was performed by means of both calibration curve and standard addition methods. The irreversibility of the oxidation process was investigated by using Cyclic Voltammetry. 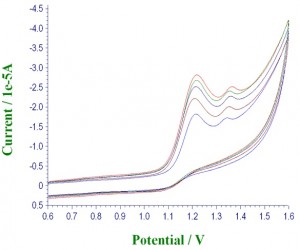 The influence of the pH on the oxidation process was studied and an evolution of voltammograms was observed. Only one voltammetric peak was observed in the whole pH range studied. An increase in pH produced a shift in the oxidation peak to more positive potential. The peak current was also dependent on the pH, implying the involvement of the protons in the current –limiting electrode process. The maximum peak current value for the voltammetric peak was obtained at the pH range 3.4.

The cyclic voltamograms of 1.0 x 10-4 M meropenem was recorded at different scan rates at 25oC. Both peak potential and peak current were affected by scan rate. The whole procedure for cyclic voltammetry was repeated for Meropenem with different scan rates ranging from 50 to 250mVs-1 while other parameter being kept constant. The applied scan rates were 50, 100, 150, 200 and 250mVs-1. Graphs of Ep (V) vs log (υ /mVs-1) and ip(10-5 A) versus (υ1/2 /mVs-1) were plotted.

For a totally irreversible process the relationship between the peak potential Ep (V) and scan rate υ (mVs-1) is expressed as21:

Where E0 is the formal potential, T the temperature, α is the transfer coefficient, n is number of electrons involved in the rate determining step, k is electrochemical rate constant and F is the Faraday constant. A straight line was observed when Ep(V) was plotted against log (υ /mVs-1) at a particular concentration and pH value of 3.4. (Fig. 2): 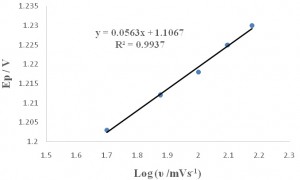 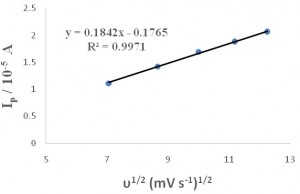 The linear relationship existing between peak current and square root of scan rate (with slope 0.1842) showed that the oxidation process is predominantly diffusion controlled in the whole scan rate range studied.

Validation of the Analytical Procedure:

Quantitative evaluation is based on the linear correlation between the peak current and concentration. For analytical purposes, best response was obtained in the aqueous media for glassy carbon electrode. The best single peak shape, peak current sensitivity, and reproducibility of these techniques were obtained in aqueous solution. The graph of meropenem concentration vs the peak current gave linear calibration curves using both techniques, indicating a diffusion-controlled process. The linearity of the calibration curve was obtained in the range of 1.0 x 10-6 to 4.0 x 10-5 M for both DPAAdSV and SWAAdSV techniques. Above these concentration ranges, the loss of linearity was probably due to the adsorption of meropenem on the electrode surface. The precision of the method was investigated by repeatedly (n = 5) measuring peak potential and peak current of meropenem within a day and over three consecutive days for both techniques.

The value of limit of detection (LOD) and limit of quantification (LOQ) were calculated as (3s/m) and (10s/m), respectively where s is standard deviation of response (three runs) and m is the slope of the calibration curve24. LOD and LOQ values confirmed the sensitivity of the proposed methods, were shown in Table 1. These results demonstrated good precision, accuracy and reproducibility. The solutions did not show any appreciable change in assay values even after two week period. However, all solutions used for the validation experiments were freshly prepared to ensure the stability of analyte in the solutions.

Application to Analysis of Pharmaceuticals:

The validity of the proposed DPAAdSV and SWAAdSV methods at the glassy carbon electrode for the determination of meropenem in pharmaceutical dosage forms was investigated by assaying injection dosage form. (Fig.4, 5) illustrate the response of rise over successive concentration of meropenem in injection dosage form by DPAAdSV and SWAAdSV. Without any sample extraction or filtration step, but just through dissolution and an adequate dilution of the analyte present in the solution of Merocrit injection. Both methods can be used for the direct determination of meropenem using the related calibration straight line. Recovery studies were carried out after addition of known amounts of pure drug to various pre-analysed formulations of meropenem.

In order to detect interactions of the excipients, the standard addition technique was applied to the same preparations, which were analysed by calibration curve. The results showed that the proposed methods were successfully applied for the assay of meropenem in its injection dosage form (Table 2). The results showed that the proposed methods could be applied with great success for meropenen assay in pharmaceuticals without any interference.

TABLE 1: REGRESSION DATA OF THE CALIBRATION LINES FOR QUANTITATIVE DETERMINATION OF MEROPENEM BY DPAAdSV AND SWAAdSV TECHNIQUES. 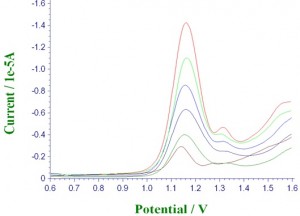 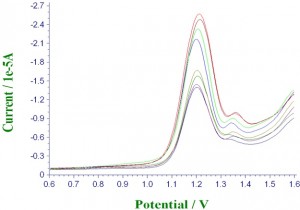 Under the optimized condition a linear correlation between DPAAdSV and SWAAdSV peak intensity and the drug concentration was obtained over the range 1.0 x 10-6 - 4.0 x 10-5 M for both DPAAdSV and SWAAdSV. The calibration equation can be written in the form (Fig. 6, 7) 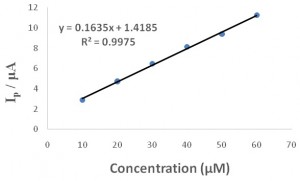 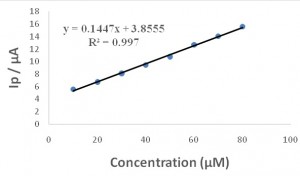 TABLE 2: THE RESULTS FOR THE DETERMINATION OF MEROPENEM (MEROCRIT) FROM INJECTION DOSAGE FORM AND ACHIEVED RECOVERY OF DPAAdSV AND SWAAdSV EXPERIMENTS.

CONCLUSIONS: The voltammetric oxidation step of meropenem in different buffer solutions between pH 2.8 to 7.0 has been elucidated. The meropenem is irreversibly oxidized at high positive potentials. The proposed DPAAdSV and SWAAdSV technique for the determination of meropenem in pharmaceutical dosage form was found to be as simple and rapid as the reported method and even more selective, sensitive and validated than the reported method. The proposed voltammetric methods can be applied directly to the analysis of pharmaceutical dosage forms without the need of separation or complex sample preparation, since there was no interference from the excipients and endogenous substances. The proposed method is fully validated.

ACKNOWLEDGMENT: One of the authors (K. K. Jhankal) thankful to C.S.I.R, New Delhi for financial assistance as SRF.