ASSESMENT OF PHYTOCHEMICALS AND ANTIOXIDANT ACTIVITY OF MURRAYA KOENIGII LINN.

ASSESMENT OF PHYTOCHEMICALS AND ANTIOXIDANT ACTIVITY OF MURRAYA KOENIGII LINN.

Results: Quantitative estimation of primary metabolites showed maximum amount of sugar, starch in stem, while lipid and protein in leaf. The TPC were ranging between 18.4±0.21 to 25.2±0.16 mg GAE/gm DW while TFC were found maximum 13.53±0.16 mg QE/gm DW in leaves. The DPPH radical scavenging capacity was found maximum in leaves (IC50 49.86±1.16) and maximum activity in LPO assay was shown by leaf extract (23.715±1.68 μM MDAg-1DW). Conclusions: These results are suggestive of primary bioactive compounds of commercially importance and also Murraya koenigii Linn is effective against free radical mediated diseases.

INTRODUCTION: Plants are found to be source of many chemical compounds which occur naturally in plants known as phytochemicals. Primary metabolites are compounds synthesized by plants for both essential and specific functions, such as growth and development 1.

In recent years considerable research has been progressed in the exploitation of medicinal plants, in the treatment of various stress related disorders caused by metabolism of oxygen leads to generation of free radicals. Natural antioxidants either in the form of raw extracts or their chemical constituents are very effective to prevent the destructive processes caused by oxidative stress 2.

Antioxidants are the substance that when present in low concentrations compared to those of an oxidisable substrate significantly delays or prevents oxidation of that substance 3. Antioxidant-based drug formulations are used for the prevention and treatment of complex diseases like atherosclerosis, stroke, diabetes, Alzheimer’s disease and cancer 4. Murraya Koenigii, belongs to the family Rutaceae, commonly known as curry-leaf tree, is a native of India, Sri Lanka and other south Asian countries. The presence of important phytochemicals make the plant useful for treating different ailments and have a potential of providing useful drugs of human use. M. koenigii is credited with tonic and stomachic properties. Bark and roots are used as stimulant and externally to cure eruptions and bites of poisonous animals. Green leaves are eaten raw for cure of dysentery, diarrhoea and for checking vomiting. This plant has been reported to have cytotoxic, antimicrobial, antibacterial, anti ulcer, and cholesterol reducing activities 5, 6.

The present study was designed to investigate the TPC and TFC and to evaluate the antioxidant activities of methanol extract of leaf, stem and fruit of Murraya Koenigii. The qualitative and quantitative estimation of primary metabolites was also done.

Leaf, stem and Fruits of Murraya koenigii Linn were collected from Rajasthan university campus, Jaipur. It was authenticated as RUBL 211431 by Herbarium, University of Rajasthan, Jaipur, Rajasthan, India.

Crude plant extract was prepared by Soxhlet extraction method. About 50gm of powdered plant material was packed in a thimble and extracted successively with 350ml of petroleum ether, ethyl acetate and methanol. The process of extraction is carried out until the solvent in siphon tube of an extractor become colorless. The extract was taken in a petriplate and kept in hot air oven and heated at 30-40ºC till the solvent got evaporated.

Phytochemical screening of active plant extracts was done by following the standard methods 7 for the qualitative analysis of various phytochemicals such as carbohydrates, proteins, alkaloids, flavonoids, terpenoids, phytosterols and tannins.

Treatment of powder with different chemical reagents- acids like 1N HCl, H2SO4, HNO3, Acetic acid and alkaline solutions like 1N NaOH and iodine was studied to detect the presence of phytoconstituents with color changes under daylight.

Stem, leaf and fruit of Murraya koenigii were evaluated quantitatively to estimate the total levels of soluble sugars, starch, proteins, lipids, chlorophyll and carotenoids following the established methods for the sugars, starch, lipid, protein and chlorophyll and carotenoids 8, 9, 10. All experiments were repeated in triplicate and data were calculated as mean ±S.E.M.

Total phenolic content were analyzed spectrophotometrically using a modified Folin-Ciocalteu colorimetric method 11. 125μl of the standard Gallic acid solution or sample extract was mixed with 0.5 ml of distilled water in a test tube followed by 125 μl of Folin- Ciocalteu reagent. The samples were mixed well and allowed to stand for 6 min before 1.25 ml of a 7% of sodium carbonate was added. Water was added to adjust the final volume to 3ml. After incubation at room temperature for 90min, the absorbance was recorded at 760nm. All experiments were repeated three times for precision and values were expressed in mean±standard deviation in terms of phenolic content (Gallic acid equivalent, GAE) per g dry weight

Flavonoid quantification was done using aluminium chloride colorimetric method 12.     Plant extracts (0.5 ml) were mixed with 1.5 ml of methanol, 0.1 ml of 10 % aluminium chloride, 0.1 ml of 1 M potassium acetate and 2.8 ml of distilled water and kept at room temperature for 30 min. The absorbance of the reaction mixture was measured at 415nm. All experiments were repeated three times for precision and values were expressed in mean±standard deviation in terms of flavonoid content (Quercetin equivalent, QE) per g dry weight.

The antioxidative activity of the extracts was elucidated by 2, 2- diphenyl-1- picryhydrazyl (DPPH) free radical scavenging capacity of the extracts 13. 1, 1-Diphenyl-2-picrylhydrazyl (DPPH) as free radical form (90% purity) was obtained from Sigma–Aldrich. DPPH solution (0.004% w/v) was prepared in methanol. Two ml of this solution was added to a sample solution (0.1ml, 1mg/ml in methanol). After 30 min, absorbance at 515nm was measured and the percentage of radical scavenging activity was calculated from the following equation:

Abs. control is the absorbance of the DPPH solution without sample. IC50 values denote the concentration of sample, which is required to scavenge 50% of DPPH free radicals.

TABLE 2: BEHAVIOR OF AERIAL PARTS OF (POWDERED) MURRAYA KOENIGII ON THE TREATMENT WITH DIFFERENT CHEMICAL REAGENTS 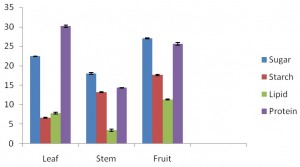 All experimental results were carried out in triplicate and were expressed as average of three analyses±SD(Standard Deviation). The IC50 values were also calculated by linear regression analysis.

Leaf, stem and fruit of Murraya koenigii was evaluated quantitatively for the analysis of total soluble sugars, protein, starch, and lipid (Fig. 1).

The screening of plant parts revealed that the amount of the total phenolic contents were higher in the leaf 25.2±0.16 mg GAE/gm DW), while lower amount 18.4± 0.21 mg GAE/gm DW) was observed in fruit part of this plant. Flavonoids are regarded as one of the most widespread groups of natural constituents found in plants. The amount of flavonoid content was decreased as leaf > stem > fruit and ranging between 4.03± 0.04 to 13.53±0.16 mg QE/gm DW. (Table1). The DPPH radical scavenging activity was decreased as leaf> stem > fruit (Table 2). The screening of the leaf, stem and fruit of the plant indicates that the presence of high phenolic compounds may be due to the presence of tannins and flavonoid which are known to possess antioxidant activities 14, 15, 16.

In lipid peroxidation assay, the extract significantly reduced MDA level. The highest MDA level was found to be 23.715±1.68 µmols MDA g-1 DW in leaf extract. MDA formation is the result of oxidation and enzymatic degradation of poly unsaturated fatty acids. It gives reddish color with TBA and is an indicator of lipid peroxidation. 17.

In conclusion, Murraya koenigii Linn have different concentrations of the total phenolic contents and flavonoid in various plant parts which possess the antioxidant activity of the plant. The high contents of phenolic compounds indicated that these compounds contribute to the strong antioxidant activity. It has been shown that the scavenging effects on the DPPH radical scavenging activity increased with the increasing concentration of the samples to a certain extent and hence are said to be strongly dependent on the extract concentration.

ACKNOWLEDGEMENT: The one of the author Pratima Vijayvargia is grateful to the Department of Botany for providing facilities and UGC for providing financial support as student fellowship (BSR).