ABSTRACT: The present investigation is carried out for β-adrenoreceptor antagonistic activity of both derivatives by evaluating their effects on the isoprenaline-induced tachycardia and hypotension in rats. Rats were divided into 5 groups (n=6) based on the treatment given to them. Group 1 received saline (0.9 % NaCl) only, groups 2, 3 were treated using test drugs NS1 and NS2 (1 mg/kg, i.v.) and groups 4, 5 received standard drugs propranolol (2 mg/kg, i.v.) and atenolol (1 mg/kg, i.v.). After 15 minutes of injection of drugs, the isoprenaline was injected, and the change in mean arterial pressure and heart rate were recorded. Administration of isoprenaline alone (0.3, 1 and 3 µg/kg, i.v.) produced significant dose-dependent hypotension and tachycardia to the rats. Pretreatment with NS1 and NS2 produced significant (p<0.01 and p<0.05 respectively) inhibition of isoprenaline-induced hypotension on normal rats. However, isoprenaline-induced tachycardia was significantly (p<0.05) reduced by NS1 pretreatment only. Propranolol showed significant (p<0.01) inhibition of isoprenaline-induced tachycardia and hypotension, while atenolol was significant (p<0.01) effective against inhibition of hypotension only. Results indicated that both derivatives, i.e. NS1 and NS2, have the potential to inhibit β receptors, but NS1 showed higher affinity to inhibit β1 receptors as compared to NS2. Hence study suggests that NS1 might have higher potency in β1 adrenoreceptor blocking activity.

INTRODUCTION: Hypertension is one of the most common cardiovascular disorder and the leading cause of morbidity and mortality and major risk factor of premature death worldwide. According to the WHO report, about 1.56 billion adults will be living with hypertension in 2025 1. The aim of antihypertensive therapy is to reduce the elevated blood pressure without adversely affecting the quality of life.

Selection of the drugs is based on the mechanism behind the induction of hypertension to the patients, and the other diseases associate with the high blood pressure as, myocardial infarction, angina, and heart failure, etc. 2 Hypertension cannot be adequately controlled by monotherapy, and thus, it requires two or more antihypertensive agents to normalize the blood pressure and overcome the side effects of monotherapy 3. The principle of multidrug therapy can be achieved by either two or more single active drugs are administered simultaneously, or many active agents are combined in one molecule that is called a hybrid molecule. These hybrid molecules often consist of different pharmacophoric groups which are linked to each other via spacers, and they act on different sites 4. 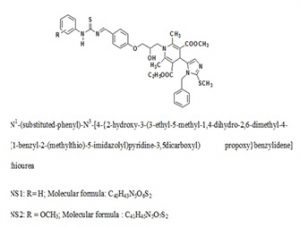 Synthesized hybrid molecules have a thiourea moiety, which is reported to possess vasodilator activity upon the structural modification and the other moiety is calcium channel blocker [3-methyl-5-ethyl - 1, 4 - dihydro - 2, 6-dimethyl - 4 - (1-phnylmethylthi-5-imidazolyl) pyridine - 3, 5-dicarboxilate] attached through beta-blocking moiety (propanolamine). The antihypertensive effects of both derivatives NS1 and NS2 were already reported in our previous study 9. In the present investigation, we evaluated the β-receptor blocking potential of NS1 and NS2 by studying their effects on percentage inhibition of isoprenaline (Iso) induced hypotension and tachycardia in the experimental rats.

Animals: Wistar albino rats (180-220 g) of either sex were procured from AISSMS College of Pharmacy, Pune. Standard laboratory conditions of temperature 24 ± 2 ºC, relative humidity 55 ± 5% and 12:12 h light dark cycle were maintained throughout all the experiments according to the guidelines of Committee for Control and Supervision of Experiments on Animals (CPCSEA). Rats were fed standard pellet animal diet (Chaken oil Mill, Pune; India) with water ad libitium. All the experimental procedures and protocols approved by the Institutional Animal Ethics Committee (IAEC) of AISSMS College of Pharmacy, Pune, constituted under CPCSEA. Proposal number: CPCSEA/IAEC/PC-03/09-2K7.

In-vivo Assessment of β-Adrenoreceptor Antagonistic Activity of NS1 and NS2:

Preparation of Animals: Rats were anesthetized by urethane (1.25-1.5 g/kg, i.p.) with prior administration of atropine (0.2 mg/kg, s.c.) to avoid the cardiopulmonary problem associated with urethane anesthesia. Anesthetized rats were fixed on its back over the surgical table. Body temperature was maintained at 37 ºC throughout the experiment. An incision was made over the skin of neck region and left jugular vein was identified and made free from connective tissues with the help of blunt forceps. Cephalad end (towards the brain) of the vein was permanently occluded with help of ligature. Using an iris scissor a small transverse cut in the vein was made. Polyethylene cannula (PE 50) filled with heparinized saline (100 IU/ml) was passed into the vein and ligated. The left jugular vein was cannulated for intravenous drug administration. The left carotid artery was isolated and exposed, and a polyethylene cannula (PE 50) filled with heparinized saline was inserted into the artery and ligated for direct measurement of mean arterial pressure (MAP) 10, 11.

Measurement of Mean Arterial Pressure: Heparinised saline (100 IU/ml) was filled inside the knob of a pressure transducer (SS 13L) and in the polyethylene catheter (PE-50) to prevent blood clotting. Cannulated carotid artery was connected to a pressure transducer linked to four channel data acquisition system (BIOPAC System Inc, MP 35). The bulldog clamp was removed from the carotid artery to divert the blood pressure to the transducer, and the MAP was allowed to stabilize, and then blood pressure was recorded 12.

Measurement of Heart Rate: ECGs of rats were recorded with the application of subcutaneous stainless steel needles electrodes to the flexor aspect of limbs of rat and connected with the SS2L electrode transducer linked with the Four Channel Data Acquisition System (BIOPAC System Inc, MP 35). Measurement of heart rate was done by analyzing the R-R interval of ECG recording. Saline (0.2 ml, i.v.) was administered, MAP and heart rate (HR) was allowed to stabilize. An equilibration period of 30 min was given, during this period; animals having mean arterial blood pressure fluctuation by more than 10% were discarded 13.

Evaluation procedure for b Adrenoreceptor Antagonistic Activity of NS1 and NS2: Dose-response curve (DRC) to Iso was constructed for an increase in HR (tachycardia) and fall in MAP (hypotension) after intravenous injection of 0.3, 1 and 3 mg/kg of Iso. Next, a single dose of test drug was administered intravenously. Fifteen minutes later, further injections of Iso (1mg/kg, i.v.) were given, and the changes in HR and MAP were recorded 14, 15.

Effect of Isoprenaline Alone on MAP and HR of Rats: Administration of Iso (0.3, 1 and 3 mg/kg, i.v), produced dose-dependent fall in MAP (hypotension) and increased the heart rate (tachycardia) in a dose-dependent manner Fig. 2. 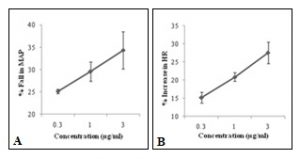 Hypotensive and Bradycardia Effect of NS1, NS2, Atenolol and Propranolol Alone in Rats: Intravenous injection of NS1 (1mg/kg, i.v.), NS2 (1 mg/kg, i.v.), atenolol (1mg/kg, i.v.) and propranolol (2 mg/kg, iv.) produced significant (p < 0.01) reduction in MAP and HR of rats as compared to saline-treated rats Fig. 3. However, NS1 was found more effective than others in the reduction of MAP and HR. 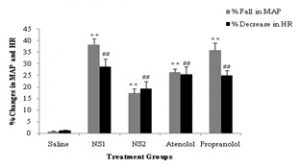 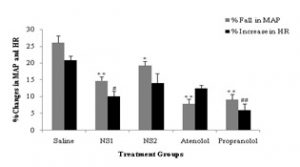 DISCUSSION: The synthesized hybrid molecules NS1 and NS2 are having three antihypertensive nucleuses, one with β-blocker activity, second with calcium channel blocker activity and third with vasodilator activity 9. Though vasodilation reduces the blood pressure by directly relaxing peripheral vascular smooth muscles, the reduction leads to a reflex increase in sympathetic tone followed by an increase in heart rate, cardiac output and plasma renin activity which attenuates antihypertensive effect. It was reported that this undesirable effect of vasodilator could be eliminated or minimized by simultaneous treatment with β-blocker and the possible increase in peripheral vascular resistance induced by β blocker was eliminated or minimized by concomitant use of vasodilators 7.

Dihydropyridines (DHPs) cause tachycardia which is counteracted by β-blockers, while the initial increase in total peripheral resistance caused by non-selective β-blockers is counteracted by the vasodilators 16. In the previous study, antihypertensive activity was evaluated using renal artery ligation, i.e. 2K1C (two kidneys one clip) model of hypertension, both NS1 and NS2 indicated an antihypertensive effect on renovascular hypertension. But since NS2 didn’t affect the heart rate, it may be due to its less or nonβ1 adrenoreceptor antagonistic activity 9. The present study was carried out to determine in the vivo β-adrenoreceptor antagonistic effect of NS1 and NS2 by measuring their inhibitory effect on the Iso induced hypotension and tachycardia to the rats.

Our results indicated that administration of Iso alone produced significant dose-dependent hypotension and tachycardia in anesthetized rats Fig. 2. The percentage increase in heart rate and hypotension by Iso are in good correlation with earlier reports. NS1, atenolol, and propranolol followed by Iso injection in respective animals inhibited the Iso induced hypotensive effect greater than NS2. However, only NS1 and propranolol further produced significant (p<0.05 and p<0.01, respectively) inhibition of Iso induced tachycardia.