ABSTRACT: Colocasia esculenta corm aqueous extract was assessed for its in vitro antioxidant capacity and free radical scavenging potential by seven different assays, viz. total phenolic content, total flavonoid content, total flavonol content, reducing power estimation as well as 1,1-diphenyl-2-picrylhydrazyl (DPPH), nitric oxide (NO) and 2,2'-azino-bis(3-ethylbenzothiazoline-6-sulphonic acid) (ABTS) radical scavenging activities. Results reveal that the total phenolic, total flavonoid and total flavonol content present in C. esculenta corm extract were found to be 68.25 ± 17.52 mg of GAE (Gallic Acid Equivalent)/g, 26.70 ± 40.18 mg of QE (Quercetin Equivalent)/g and 1.40 ± 53.99 mg of QE/g of dry extract respectively. Reducing power of the extract was found to be concentration dependent as it increase with increase in concentration and it was maximum at the highest evaluated concentration of 200 µg/ml. Significant antioxidant efficacy of C. esculenta corm was further confirmed by IC50 values of DPPH, NO and ABTS radical scavenging assays as they were found to be 74.34 ± 12.17 µg/ml, 65.52 ± 7.76 µg/ml and 132.29 ± 14.13 µg/ml respectively. Results were compared with the reference, ascorbic acid. Phytochemical screening of the aqueous extract of C. esculenta corm also validated its antioxidant potential by showing the presence of certain phytochemicals viz. tannins, saponins, flavonoids, steroids, carbohydrates, proteins and glycosides supposed to be responsible for its antioxidant efficacy. Thus, C. esculenta corm may be explored for developing a novel antioxidant agent.

INTRODUCTION: Imbalance between the generation and neutralization of Reactive Oxygen Species (ROS) causes cell damage. ROS also plays a vital role in the origin and development of several health issues like diabetes, etc. Hence, antioxidant compounds which could protect the cellular organelles from oxidative damage are generally used either to control the generation of ROS or to scavenge them.

Recently, the use of natural antioxidants has gained importance because of their indigenous origin, strong efficiency to trap free radicals, perceived safety, potential therapeutic value and long shelf life 1. Thus, phytochemical screening of medicinal plants used in Indian Traditional System of Medicine is the need of the hour in order to identify the natural antioxidants to protect the system from various diseases. The present study is a forwarding step in this direction to discover and develop novel natural antioxidants with improved efficacy and lesser toxicity. Furthermore, this information of biologically active phytochemical could be exploited for synthesizing valuable and efficient antioxidant agents as well 2, 3.

Colocasia esculenta is a herbaceous perennial plant, selected for the study, is of “Araceae” family and commonly known as ‘Taro’ in English and ‘Arbi’ or ‘Khuyya’ in Hindi. In India, it is locally cultivated and used as vegetable. Its starchy root as fleshy corm (tuber) and wide leaves, both are edible. In addition to starch the corms known to contain substantial amounts of protein, vitamin C, thiamine, riboflavin, niacin and dietary fiber. C. esculenta is reported to display antidiabetic 4, anti-inflammatory 5, antioxidant 6 and anticancer activities 7. Studies on the chemical constituents of C. esculenta have reported the presence of pelargonidin-3-glucoside, cyanindin-3-rhamnoside, cyanidin-3-glucoside, orientin, isoorientin, isovitexin, vitexin X"-O-glucoside and luteolin 7-O-glucoside 8, 9.

The aim of the present study was therefore, to evaluate antioxidant efficacy of C. esculenta corm extract in vitro and correlate this activity with the presence of screened phytoconstituents by standard chemical methods.

Extract preparation: Corms of C. esculenta (1 kg) were peeled off, washed well, air dried and finally boiled in distilled water. The extract was filtered through Whatmann filter paper No. 45 and the filtrate was concentrated and lyophilized to obtain a dry dark brown solid material (9.7g) which was stored at -40 °C for further investigations

DPPH radical scavenging assay: DPPH radical scavenging assay was performed according to the method of Liyana-Pathirana & Shahidi, 2005 14. 0.1 mM DPPH solution was made in methanol and 1 ml of this solution was mixed with 1 ml of different dried extract concentrations (50-200 µg/ml) in methanol. The reaction mixture was vortexed thoroughly and left in the dark at room temperature for 30 minutes.

NO radical scavenging assay: Scavenging of NO radical was determined by the method of Green et al, 198215. Reaction started by incubating 0.5 ml SNP solution (10 mM in Phosphate Buffered Saline) with different concentrations of dried extract (10-50 µg/ml) at 25 °C. After 150 minutes, 0.25 ml of sulphanilamide and 0.25 ml of NED were added. The mixture was allowed to stand for 30 minutes. Appearance of pink colour occurs. The absorbance of dried extract and standard was measured at 540 nm. The ability of dried extract and standard to scavenge NO radical was calculated by the following formula:

ABTS radical scavenging assay: Scavenging of ABTS radical was determined by the method of Re et al., 1999 16. The ABTS•+ was pregenerated by mixing 7 mM ABTS stock solution and 2.45 mM potassium persulfate. The solution was incubated for 12 hours in the dark at room temperature until the reaction was complete and the absorbance was stable. 1 ml of above solution was mixed with 1 ml of different concentrations of dried extract/standard (25-125 µg/ml). After 6 minutes of incubation, absorbance was measured at 734 nm. The ability to scavenge ABTS radical was calculated by the following formula:

Statistical analysis: All assays were carried in triplicate and results were expressed as Mean ± Standard Deviation.

The polyphenolic compounds present in plant have a great diversity of compounds, such as flavonoids, tannins, etc. Flavonoids also comprises number of compounds like anthocyanins, flavanols, flavonols, flavones etc 20. As antioxidants, flavonoid have been reported to be able to interfere with the biochemical pathway involved in the generation of reactive oxygen species (ROS), in addition to quenching of free radicals and chelating of redox active metals 21. Results illustrate that total phenolics, flavonoids and flavanols are present in significant amount in C. esculenta corm. Their presences in addition to their multifaceted actions make the C. esculenta corm plant extract a potent candidate for exploring as an antioxidant.

In this assay system, the presence of antioxidant which serves as an electron donor reductant causes the reduction of the Fe3+/ferricyanide complex to the ferrous form (Fe2+) and measured by direct electron donation. C. esculenta corm is associated with significant antioxidant efficacy because of its high concentration of polyphenolics which have excellent reduction potential to react with potassium ferricyanide (Fe3+) to form potassium ferrocyanide (Fe2+) and hence act as natural antioxidants. 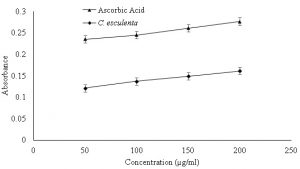 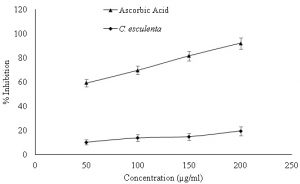 Nitric oxide radical (NO˙) is known to be a ubiquitous free radical distributed in tissues or organ systems and have a vital role in neuromodulation or neurotransmitter in the central nervous system. In this assay, SNP gets decomposed in the aqueous solution at physiological pH 7.4 and produced NO radical. This NO radical reacts with oxygen to produce nitrate and nitrite, which was determined by using Griess reagent 24. 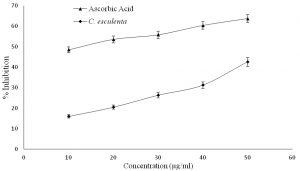 The ABTS radical monocation is generated by oxidation of ABTS with potassium persulfate and it gets reduced in the presence of hydrogen-donating antioxidants. The efficacy of such antioxidants depends upon both the concentration of antioxidant and duration of reaction on the inhibition of the radical cation absorption. This assay has several advantages for the determination of antioxidant activity in a number of ways. First, the chemistry involves the direct generation of the ABTS radical monocation with no involvement of an intermediary radical. Second, it is a decolorization assay; thus the radical cation is pre-formed prior to addition of antioxidant test systems. Third, it is applicable to both aqueous and lipophilic systems15. 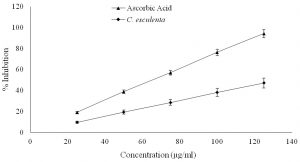 C. esculenta corm was found to possess tannins which have amazing stringent properties. They are known to hasten the healing of wounds and inflamed mucous membranes 26. Flavonoids are also present in C. esculenta as a potent water-soluble antioxidant and free radical scavenger, which prevent oxidative cell damage and also have strong anticancer activity. It also helps in managing oxidative stress as well 27. Although, both tannins and flavonoids, are in higher concentration in C. esculenta corm and hence validates the high extent of antioxidant efficacy of C. esculenta corm.

Steroids also help in regulating the immune response 29, 30. Both saponins and steroids are present in C. esculenta corm and their concentrations were also significant.

Plants containing carbohydrates and glycosides are known to exert a beneficial action on immune system by increasing body strength and hence are valuable as dietary supplements. Glycosides also have vast therapeutic efficacy as they are found in almost every medicinal plant. C. esculenta corm also shows the presence of carbohydrates and glycosides.

CONCLUSION: Since, natural antioxidants derived from plant sources contribute notably in the prevention of pathological consequences caused by free radicals therefore, the present findings, conclude that the aqueous extract of C. esculenta corm possesses strong antioxidant potential. Hence, this promising medicinal plant may be exploited further for phytochemical investigation and their mode of action in order to develop safe, economical, effective and targeted antioxidant agents for the benefit of mankind.

ACKNOWLEDGEMENT: The first author, Manjulika Yadav is grateful to UGC (University Grants Commission), New Delhi, Govt. of India, for financial assistance in the form of fellowship.

CONFLICT OF INTEREST: The authors of this article declare no conflict of interest in this study.