ABSTRACT: Objective: The present study has been carried out to evaluate the antioxidant property of different extracts obtained from successive extraction of Annona reticulata L. leave with solvents of increasing polarity. Effort also has been made to estimate the flavonoid and phenolics content of the extracts. Method: The antioxidant activity has been studied in-vitro by using DPPH, hydrogen peroxide and nitric oxide-scavenging assay. Results: DPPH, H2O2 and Nitric-oxide scavenging effect of Annona reticulata L.  leaf extracts  were found  to  be  dose  dependant  with  maximum  inhibition   at  highest concentration. Methanolic extract of the leaves of Annona reticulata Linn. is found to have most potent anti-oxidant activity in DPPH, H2O2 and nitric-oxide Radical scavenging methods. IC50 value DPPH, H2O2 and Nitric-oxide inhibition of methanolic extract at highest concentration (400µg/ml) are 62.58 ± 1.15, 68.27 ± 1.05 and 64.01 ± 1.02. Conclusion: The results suggest that all the tested extracts are having antioxidant property, but the methanol is having significantly higher flavonoid and phenol content. Due to presence of higher flavonoid and phenol content in methanol, it may be considered as the fraction with better pharmacological property in comparison to other tested extracts.

INTRODUCTION: For thousands of years mankind is using plant sources to alleviate or cure illness. Novel chemical compounds synthesis from the plant active constituents are of potential use in medicine and other usefull application. Herbal remedies are popular remedies for diseases used by a vast majority of the world’s population. Herbal plants having many pharmacologically active compounds like flavonoids, alkaloids, tannin, steroids, glycosides, phenols, fixed oils, which is stored in their specific parts of leaves, bark, flowers, seed, fruits, root etc.

Reactive oxygen species (ROS) are oxygen free radicals and play dual role of being both deleterious and beneficial to biological systems. Apart from their role in the diseased conditions in the body, ROS are also known to have a role in the spoilage of food by the autoxidation of lipids, the enzymatic oxidation, during storage and processing in fats, oils and fat-containing foods. Antioxidants are defined as substances, present at low concentration relative to the oxidizable substrate, which significantly delay or prevent oxidation of substrate 2. Human body does not synthesize overwhelming amount of antioxidants to compensate with the damaging effects of ROS.

North East India has a vast and diverse genetic pool of various plant species and so, lots of plants are yet to be analyzed for their medicinal properties. Annona, a genus belonging to the Annonaceae family, is a very important medicinal plant. This is native of West Indies but Annona reticulata and Annona squamosa are widely grown throughout the tropics in India. Annona reticulate Linn. (Family – Annonaceae) commonly known as bullock's heart or raamphal plant, is widely distributed all over India and tropical parts of the globe. In traditional medicinal system different parts of the plant are used as insecticides, anthelmintic, suppurant, astringent, antidysentric and vermifuge. Annona reticulata L. is a highly apparent plant in Ayurvedic system of medicine for the treatment of various ailments. Ethanolic extracts of leaves and stem are reported to have an anticancerous activity. The aqueous leaf extract has also been reported to ameliorate hyperthyroidism, which is often considered as a causative factor of DM 3, 4.

Previous Experiments conducted revealed that, the methanolic extract of leave of Annona reticulata Linn. is having potential anti-hyperglycemic property in diabetes induced animal models 6. Oxidative stress is known to play major role in development of diabetes and its related complications as well as several other several metabolic disorders, and use of antioxidants may be considered as one of the approaches for management of those disorders 7, 8. The present experiments were carried to evaluate the antioxidant potential of different extracts obtained from successive extraction of Annona reticulata Linn. leaves in-vitro.

Effort also has been made to estimate the flavonoid and phenolic content of the extracts.

Collection and Authentication of the Plant Material: The leaves of Annona reticulata Linn. were collected in the month of October 2014 from Dibrugarh, Assam. The plant was authenticated by Dr. B.K. Sinha (HOO), Botanical Survey of India, Shillong. The plant parts specimen were submitted as herbarium with voucher specimen no. DU/PSc/ HRB-01/2011. The leaves were dried initially under shade. It was preserved in air tight containers. The completely dried leaves of Annona reticulata Linn was coarsely powdered.

Preparation of Extracts: 2kg of powdered material was extracted in soxhlet apparatus with solvents of increasing order of polarity i.e. petroleum ether, ethyl acetate, acetone. Methanol and water. Extracts were dried in rotary evaporator and weighed. All the extracts obtained from successive extraction were subjected for estimation of anti-oxidant activity.

Estimation of Total Phenolic Compounds: The total phenolic content of the methanolic extract of C. colebrookianum, S. edule was determined by using the Folin-Ciocalteu reagent. The extract are dissolved in methanol and diluted. 0.5ml of extract dilution were mixed with 2.5ml of 0.2N Folin-Ciocalteau reagent for 5 min and 2.0 ml of 75 g/l sodium carbonate were then added. After incubation for 120 minutes at room temperature, the absorbance against prepared reagent blank was determined at 760nm with an UV-Vis Spectrophotometer. Standard curve of Gallic acid solution with different concentration was prepared using the similar procedure. Results were expressed as gallic acid equivalents 9 and the calculations were done by using the following formula:

Estimation of Total Flavonoids Content: Aluminum chloride colorimetric method was used for determination of total flavonoids. The methanolic extract of Annona reticulata Linn. are dissolved in methanol in the concentration of 1mg/ml and diluted. 1ml of the diluted extract solution was taken in a test tube and 1 ml of 2% AlCl3 solution dissolved in methanol. The samples were incubated for an hour at room temperature. The absorbance was determined using spectro-photometer at λmax = 415 nm. The calibration curve was prepared by using quercetin as a (standard compounds) solutions at different concentrations 10 to 90 μg/ml in methanol. The content of flavonoids in extracts was expressed in terms of quercetin equivalent and the calculations were done by using the following formula10:

DPPH Radical Scavenging Activity: The DPPH (1, 1-Diphenyl –2-picrylhydrazyl) assay method is based on the reduction of DPPH, a stable free radical. The free radical DPPH with an odd electron gives a maximum absorption at 517 nm (purple color). When Antioxidants react with DPPH, which is a stable free radical becomes paired off in the presence of a hydrogen donor (e.g., a free radical-scavenging antioxidant) and is reduced to the DPPH and as consequence the absorbance’s decreased from the DPPH.

Nitric Oxide Free Radical Scavenging Activity: The principle behind this procedure is that sodium nitro-prusside in aqueous solution at physiological pH spontaneously generates nitric oxide which interacts with oxygen to produce nitrite ions that can be estimated using Griess reagent. Scavengers of nitric oxide compete with oxygen, leading to reduced production of nitrite ions. Large amounts of NO may lead to tissue damage.

The stock solution of extracts and ascorbic acid (standard compound) were prepared in methanol to achieve the concentration of 1 mg/ml, then it was diluted to different concentration. 0.5 ml each of the diluted solutions were taken in a separate test tube. To each tube 2.0 ml of sodium nitroprusside (10 mM) in phosphate buffer saline was added. The solutions were incubated at room temperature for 150 minutes.

The similar procedure was repeated with methanol as blank which served as control. After the incubation, 5 ml of griess reagent (1% sulphanilamide, 2% H3PO4 and 0.1% naphthyl ethylene diamine dihydrochloride) was added to each tube including control. The absorbance was measured at 546 nm on UV-visible spectrometer Shimadzu, UV-1800, Japan 12.

The percentage of hydrogen peroxide scavenging of both C. monogyna extracts and standard compounds were calculated:

Statistical Analysis: The data were subjected to statistical analysis. All the values are expresses as mean ± SD and data was analyzed by One-way ANOVA, using Graphpad INSTAT. The post-hock analysis was carried out by Dunnet’s multiple comparison tests to estimate the significance of difference between individual groups (**P<0.01). Confidence interval has been considered as 99% and p< 0.01 were considered significant. IC50 value was calculated by plotting a graph with percent inhibition on y-axis and concentration on x-axis.

Determination of Total Phenolic Content: The Petroleum ether, ethyl acetate, acetone, Methanolic and water extract of leaves of Annona reticulata Linn. were found to contain 0.08, 0.12, 0.266, 0.300 and 0.281 mg/ml equivalent to Gallic acid Table 2. The phenolic compound may contribute directly to the antioxidant activity.

Determination of Total Flavonoid Content: The flavonoid content as analyzed by the aluminum chloride colorimetric method was found to fall in the range of 5.72 to 77 mg quercetin equivalent/g of dry extract. The Petroleum ether, ethyl acetate, acetone, Methanolic and water extract of leaves of Annona reticulata Linn. were found to contain 0.235, 0.238, 0.518, 0.418 and 0.214 mg/ml equivalent to quercetine Table 4. Acetone extract of Annona reticulata Linn. showed maximum flavonoid content, followed by Methanol extract. Water extracted least amount of flavonoids, as opposed to notable amount of phenols extracted in it. Acetone appeared best for flavonoid extraction. Suitability of acetone for extraction of flavonols has already been reported 13.

DISCUSSION: The results of this study, clearly indicated that Methanolic extract of Annona reticulata Linn. have high antioxidant activity and radical scavenging activity against various antioxidant systems in vitro models. It has notable amount of flavonoid and phenolic compounds. These assays have important applications for the food and pharmaceutical industry. Moreover, Methanolic extract of Annona reticulata Linn. can be used as an easily accessible source of natural antioxidants and as a possible food supplement. 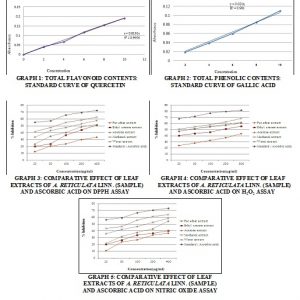 CONCLUSION: The plant Annonasq retiulata Linn. has a wide array of pharmacological activities. It is widely used in various traditional system of medicine as a medicine. It has been used since centuries a tonic, in treatment of diarrhoea, liver disorders, inflammation, leucorrhea, urinary tract infections, malarial fever and diabetes, as antilice agent, wound healing activity.

Such findings can contribute to the increasing database of the medicinal plants and may be of importance in varietal improvement, food preservatives, nutraceuticals, cosmetics and biopharmaceuticals in a race with the degenerative diseases like cancer, cardiovascular diseases and neurodegenerative diseases. Hence proper isolation of more active principles might help in the findings of new lead compounds which will be effective against free radical mediated diseases.

ACKNOWLEDGEMENT: The authors are thankful to Head of the Department, Pharmaceutical Sciences, Dibrugarh University, Assam, India for providing laboratory facilities for this research work.

CONFLICT OF INTEREST: The authors declare no conﬂict of interests.