All-spice (pimenta) is one of the under-utilized resources available in the tropical regions of the globe. It is a variety of sweet pepper used as a spice and its leaves are used for traditional culinary purpose. Researchers have studied the antioxidant potentials of the berries of the plant, but no documented work is reported on its stem, leaf and roots for antimicrobial properties. Thus, the present investigation was carried out to access the antimicrobial and anti-oxidation potentials of leaf extracts using three solvent systems, (Aqueous, acetone and methanol). All solvent systems at different concentrations were evaluated for antibacterial, antifungal and reducing capacity against selected bacterial and fungal pathogens; zone of inhibition was exhibited by methanol leaf extracts in decreasing order for Escherichia coli, Bacillus cereus, Salmonella typhimurium, and Staphylococcus aureus. Lesser inhibitory zones were obtained by acetone leaf extracts, whereas, Klebsiella pneumonia and Pseudomonas aeruginosa were not inhibited by any extracts.  Aqueous extract demonstrated no inhibitory activity against tested bacterial pathogens. All the three leaf extracts were found to be ineffective against fungal strains (Fusarium oxysporum, Aspergillus niger, Aspergillus flavus and Candida albicans) tested. Protein content in each extract was determined and reducing capability was estimated which was found to be high in methanol and acetone extract whereas aqueous extract showed low reducing ability.

INTRODUCTION: Traditionally plants are used for treating many health problems. Medicinal values of many plants still remain unexplored owing to scanty scientific information available on the bioactive ingredient in them. Yet, plant materials remain important resources to combat serious diseases of the world. Among more than 2, 50,000 species of higher plants only 5-10% is chemically investigated. In recent years, drug resistant to pathogenic human bacteria has been reported all over the world 1-2.

Contrary to synthetic drugs, antimicrobials of plant origin are not associated with many side effects and bear an enormous therapeutic potential to heal many infectious diseases 3. Plants are also known to contain enumerable biological active compounds 4 which possess antibacterial and antioxidant properties 5. Most of the potentially harmful effects of oxygen are believed to be due to the formation and activity of reactive oxygen species (ROS) acting as oxidants, that is, compounds with a tendency to donate oxygen to other substances.

Many reactive oxygen species are free radicals and are extremely reactive and short lived 6. They are produced continuously in cells, either as accidental by products of metabolic process like phagocytosis or deliberately. Free radicals are capable of attacking the healthy cells of the body, causing them to lose their structure and function. An over production of these reactive species can occur, due to oxidative stress brought about by the imbalance of antioxidant defence system and free-radical formation 7.

Pimenta dioica (Myrtaceae) is a slow growing evergreen tree commonly called ‘All spice’ was "discovered" in Mexico by the 16th century Spanish explorers who called it "Pimenta" confusing it with black pepper (Fig. 1). Allspice, also called Jamaica pepper, pepper, myrtle pepper, pimenta. The name "allspice" was coined as early as 1621 by the English, who thought it combined the flavour of cinnamon, nutmeg, and cloves 8. Pimenta dioica, mid-canopy tree native to the Greater Antilles, southern Mexico and Central America, is now cultivated in many tropical countries (Fig. 1). 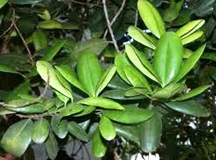 This plant is widely seen in southern part of India. It bears high potential to be utilized as therapeutic agent beyond culinary purposes.Polyphenols from berries of Pimenta dioica are registed with antioxidative properties 10. Allspice has also been used as a deodorant. Volatile oils found in the plant contain eugenol, a weak antimicrobial agent 11. Allspice is also reported to provide relief for indigestion and gas. Pimenta dioica plant oil shows Nematicidal activity against Pinewood Nematode (Bursaphelenchus Xylophilus) 2. In very recent studies Pimenta dioica oils shown acaricidal effect against the cattle tick Rhipicephalus (Boophilus) microplus 12. Its name is due to the fact that the leaves and fruit smell like a combination of cloves, black pepper, nutmeg, and cinnamon 13.

The essential volatile oils in this spice functions as rubefacient, anti-inflammatory, carminative, antioxidant and anti-flatulent agent. The essential oil, eugenol, derived from the allspice berry (70-80%) has been in therapeutic use in dentistry as a local anesthetic and antiseptic for teeth and gum. The spice also contains very good amounts of vitamin A, vitamin B6, riboflavin, niacin and vitamin C. Literature survey reveals that appreciable research has been undertaken on Pimenta dioica on its known antimicrobial and antioxidant properties present in the oil extracted from berries 14. Similar reports have not been documented on antimicrobial and anti-oxidant properties of its leaves.

Thus, attempts were made in the present research towards comparative studies of various types of Pimenta dioica leaf exhibiting biotherapeutic properties (antibacterial, antifungal and reducing capacity).

Preparation of Plant extract: Fresh leaves of Pimenta dioica were collected and shade dried in laboratory.  For aqueous extract preparation ten grams of air-dried powder was taken and stirred with 30ml of distilled water at room temperature for 2 hours. It was then filtered through muslin cloth and centrifuged at 6000rpm for 10 min. The supernatant was collected. This procedure was repeated twice. The sample was evaporated at 75°C.For acetone and methanol extracts preparation, ten grams of Pimenta dioica fresh leaves were blended then filtered through whatmann filter paper. 180 ml each of methanol and acetone was added, till pigments were drained out from the residue. These extract were also evaporated in water bath at 60-65°C.

Evaluation of Antibacterial activity: The aqueous extract was used with different dilutions from ratio 100:0, 75:25, 50:50, 25:75 and the acetone and methanol extracts were used with different dilutions from ratio 100:0, 90:10, 80:20, 70:30, 60:40, 50:50, 40:60, 30:70, 20:80, 10:90, 5:95, 2:98 and 1:99. The sterile discs (Whatmann No.1, 6 mm diameter) were separately impregnated with 6µl of the test compound, and placed on the nutrient agar which had previously been inoculated with the selected test microorganism. The plates were incubated at 37±2°C for 24 h. Microbial inhibition was determined by measuring the diameter of zone of inhibition (in mm). For each bacterial strain, standard streptomycin disc (HiMedia) was used as positive control. Negative control was set up with the test organisms using distilled water instead of the plant extract.  The experiment was done three times and the mean values are presented.

Evaluation of Antifungal activity: The preliminary assay was done by using stock solutions of aqueous, acetone and methanolic leaf extracts of Pimenta dioica to screen for antifungal activity by disc diffusion method. Sterile discs of 6mm diameter (Whatmann No. 1) were separately impregnated with 6µl of the test compound, and placed on the Potato dextrose agar plate which had previously been inoculated with the selected test fungal pathogen. The antifungal assay plates were incubated at 28 ± 2°C for 48 h. For each fungal strain, mercuric chloride (0.7%) was used as positive control. Negative control was set up with the test organisms using distilled water. The experiment was done three times and the mean values are presented.

Estimation of Protein content of Pimenta dioica leaf extract: The crude as well as the extract purified by chromatography on silica gel were analysed for Protein content Lowry’s method 15.

Reducing power assay: The reducing power of the extracts was evaluated according to method described by Oyaizu, 1986 16. Different amounts of extracts were perched in distilled water to make the volume of 2 ml and mixed 2.5 ml of 1% K3Fe (CN)6. This mixture was incubated at 50oC for 20 min, then 2.5 ml of 10% TCA was added to the blend and centrifuged at 3000 rpm for 10 min. Supernatant was assorted, mixed with FeCl3 (0.5 ml, 0.1%), and the absorbance was measured at 700 nm. Increase in absorbance of the reaction mixture indicates increased reducing power. All the tests were performed in triplicates.

RESULTS AND DISCUSSION: All the three extracts of Pimenta dioica leaf were tested for anti bacterial, antifungal and reducing capability.

Evaluation of Antibacterial activity: The zone of inhibition by methanol and acetone extracts of Pimenta dioica leaf tested against selected bacterial pathogens at different dilution is presented in Fig. 2 & Fig 3.

Among all the extracts, acetone extract was found to be effective to inhibit E.coli and Salmonella typhimurium with the minimum inhibitory dilution ratio (1:99 and 5:95) which gave  inhibition zone of 6.1 mm and 7 mm diameter (including disc diameter) respectively. Further, stock leaf extract (100:0) showed significant inhibitory effect against Bacillus subtilis (13mm), Salmonella typhimurium (12.5mm), Staphylococcus aureus (11mm) and  E.coli (11mm).The inhibitory activity of methanol and acetone extracts againstS.typhimuriumare shown in Fig. 4 a and b. 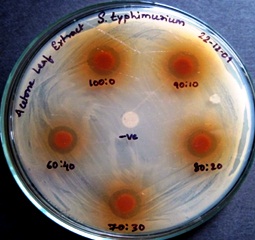 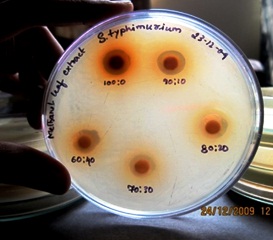 Evaluation of Antifungal Activity: All three extracts (aqueous, methanol and acetone) were found to be ineffective against the tested fungal pathogens17.The study shall be extended to screen the inhibitory activity of Pimenta dioica leaf extracts on soil pathogenic fungi.

Reducing Power Assay: The reducing capacity of a compound may serve as a significant indicator of its potential antioxidant activity 18. The reductive ability was measured in terms of Fe3+ to Fe2+ transformation in the presence of different concentrations of the extract. The presence of reductants in extracts causes the reduction of potassium hexacyanoferrate to the ferrous form.

Therefore Fe2+ can be monitored by measuring the absorbance, where it is directly proportional to the reducing power of test substance. Earlier authors have observed a direct correlation between antioxidant activities and reducing power. The reducing ability of a compound generally depends on the presence of reductants 19, which have been exhibited antioxidative potential by breaking the free radical chain, by donating a hydrogen atom 20. 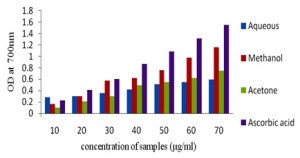 The reducing power of the leaf extracts increased with increasing concentrations. The results obtained may have significant importance in pharmaceutical and food industry.

CONCLUSIONS: Present investigation revealed that Pimenta dioica leaves could be a very useful resource as a biotherapeutic agent. As its leaf extracts possess a broad spectrum of activity against pathogenic bacteria and also function as reducing agent, its expended use as dried/dehydrated extracts and its blends could be worth exploiting from economic point of view. These efforts could open up the possibilityof finding new clinically effective biotherapeutic agents. This indeed is a step towards its sustainable use and justifying its abundance. Attempts are also being made to use the leaf fibers as prebiotic agents.