Categories Menu
Home » ASSESSMENT OF CLINICAL AND DEMOGRAPHIC PROFILE OF AURICULAR LOBULOPLASTY: A STUDY OF 446 PATIENTS

ASSESSMENT OF CLINICAL AND DEMOGRAPHIC PROFILE OF AURICULAR LOBULOPLASTY: A STUDY OF 446 PATIENTS

ASSESSMENT OF CLINICAL AND DEMOGRAPHIC PROFILE OF AURICULAR LOBULOPLASTY: A STUDY OF 446 PATIENTS

ABSTRACT: Objectives: Ears are an important part in our facial aesthetics and cosmetics. Complete and partial ear cleft patients are routine in the ENT outpatient department for surgical repair. The objective of this study is to evaluate the surgical outcomes of auricular lobuloplasty. Methods: Total 446 patients who underwent auricular lobuloplasty were included in this study. Demographic characteristics, the average duration of earrings worn, presence of complications and other factors were evaluated. Result: The mean follow-up was 9 months, with the shortest and the longest follow-up being 6 and 12 months, respectively. Surgeries were performed under local anesthesia in 446 cases. There were very few postoperative complications, and revision surgery was needed in 7 out of 446. Conclusion: Multiple surgical techniques exist for repairing earlobe deformities. Auricular lobuloplasty via sandwich technique is a surgical procedure that has several advantages, including safety ease of use, effectiveness, cheap, and without any advanced skills and instrument need.

INTRODUCTION: Facial aesthetics develop depending on the symmetry and harmony of the facial skeletons and soft structures. The auricular lobule has an important place in face and ear aesthetics. The ear lobe is generally conical and round in shape and is an important anatomical formation that allows women to wear accessories such as earrings 1, 2. Ear piercing is much more common in rural India, but now a day’s trend is increasing in urban population and in males as a fashion. It has different shapes and sometimes it can attract a lot of attention to the face. Large earrings work as their social identity in certain tribes in India.

Ear piercing has mainly social, religious and cosmetic motives. Ear piercing can be single or multiple sites and earrings are made up of plastic, gold or any other metal. Earrings are of different shapes and of different weights according to the metal. In different societies, auricular lobules are pierced for religious, cosmetic and social reasons; however, they are associated with the level of societal development. Partial or complete tear of the auricular lobule is a critical situation that is very common in women and leads to cosmetic deformity.

Constant pull of an earring over lobule can make the hole lengthening and can cause partial cleft. If this is not corrected using a lighter ring, it can convert into a complete cleft tearing lobule in two parts. Complete cleft usually occurs traumatically by pulling the earring accidentally. This type of cleft usually requires surgical correction. There are more than 20 methods for surgical correction of torn ear lobe 9.

The sandwich technique for surgical closure is the simplest and easiest to do. The present study is an analysis of clinical profile of 446 cases that were surgically treated from December 2019 to January 2021.

METHODS: Patients who underwent auricular lobuloplasty for elongated auricular lobule or cleft in the Department of ENT, GMERS Medical College & hospital, Dharpur, Patan from December 2019 to Jan 2021 were included in this retrospective analytic study.

The study was conducted in accordance with the guidelines for good clinical practice and ethics. In this study, informed and written consents have been taken from the patients and their relatives. A total of 446 patients, 440 women (98.6%) and 6 men (1.34%), were included in the study. Their ages ranged from <20 to >60 years. Surgical consent was obtained from all the patients preoperatively.

Ear lobe repair was done by sandwich technique attending the outpatient ENT department of a tertiary care hospital in north Gujarat. The local part was sterilized with povidone-iodine and spirit. After painting & draping, 2% lignocaine without adrenaline was injected at ear lobule by 26-gauge needle.

The ear lobe was stretched with Adson’s plain forceps, and a thin layer of skin covering the cleft was removed over 360 degrees with 11 number surgical knife. The margins were sutured with Ethilon 4-0 suture without a hole, and sterile dressing was done.

Clinical and demographic characteristics of all the patients like age and caste, size of torn earlobe, duration of earrings worn, the presence of complications and patient satisfaction were evaluated. 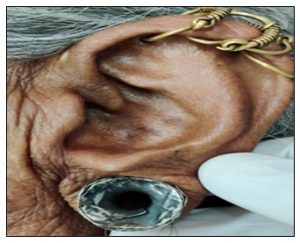 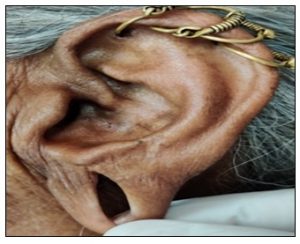 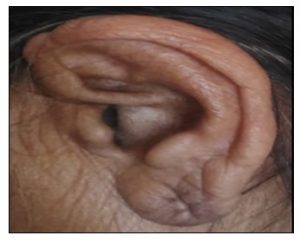 FIG. 3: SUTURING OF EARLOBE WITH ETHILON 4-0 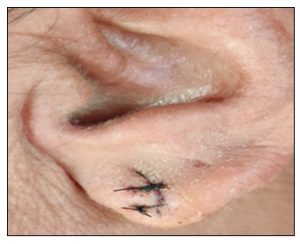 TABLE 1: DISTRIBUTION ACCORDING TO LOBULOPLASTY 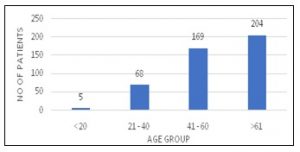 In our study, size of torn ear lobe was measured and most common size was below 5 mm followed by 6-15 mm.

TABLE 2: DISTRIBUTION ACCORDING TO SIZE OF TORN EAR LOBE

The split ear lobe is more common in Desai, Rabari, Chaudhry, Aahir & Patel communities in north Gujarat due to heavy & large earrings and wearing them for too long time. Caste proportion may vary depending on different geographical areas and social customs. The highest numbers of patients were from Rabari and Desai communities, followed by Chaudhary, Aahir, and Patel communities. The distribution of caste and percentage is shown in the chart given below. 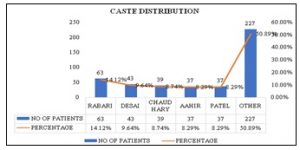 The total duration of the earring also worn matters for the development of cleft lip. 309 patients (69.28 %) had worn earrings for more than 40 years. 99 patients (22.19%) had worn for 21 to 40 years and only 38 patients (8.52 %) had worn for less than 20 years. Different complications also occur in ear lobe repair such as recurrence of cleft, wound infection, color change of skin, and lengthening of the ear lobule. Recurrence of cleft occurred in 7 patients only (1.56%) and was treated by revision surgery. Color change of skin was noted in 9 patients and wound infection was noted in 5 patients which was treated with oral antibiotics. The overall complication rate was 4.7% in the study group.

DISCUSSION: The history of ear piercing is way back up to the Egyptian king Tutankhamen. He had torn ear lobes in ancient pictures 4. Latin American culture usually pierce newborn girls to differentiate them from boys. In ancient India, children’s earlobe was pierced, and a small clay cylinder was put in the holes. These cylinder’s size was increased as the hole grew bigger. Many objects were found by archeologists and are kept in a museum in India 7.

Anatomically pinna is a resilient structure with several folds by the contour provided by cartilage. Ear lobe is made up of loose areolar fatty tissue. Ear lobe is so soft that chronic pressure from earrings will lead to elongation of the cleft and expulsion of earring from the ear. This is the main reason for repair of earlobe except cosmetics. Bilateral ear cleft is more common as rings are worn on both sides in our study. Complete cleft usually occurs accidentally when females’ hair stuck in earring and hair are stretched during combing. Children usually pull mother's earrings while carrying in their arms which can result in complete cleft. In two cases in our study, a complete cleft occurred due to stealing the earrings from both earrings by a thief. There are about 21 methods with small modifications in each for surgical repair for partial and complete cleft. Some methods also leave an opening, needing no repiercing. McLaren first described the partial cleft's straight linear closure after de-epithelizing the cleft with scalpel 7. Reiter and Alford described repairing a partial cleft with 2-layer Z plasty closure 4. Fatah described the creation of an L-shaped flap to repair the complete cleft with a less visible scar and preserve inferior lobe contour 10.

Hassen 6 reported unilateral lobule tear in 58% of the cases, bilateral lobule tear in 42%, partial lobule tear in 29% and complete lobule tear in 71%. In the present study, partial lobule cleft was found in 565 ear lobules (79.8%) and the partial cleft was noted in 143 ear lobules (20.1%). There is no consensus in the literature as to when the lobule can be punctured after reconstructing the auricular clefts. Altıntaş A et al. 8 and Vujevich et al. 9 reported that they waited for at least 6 weeks after repairing the lobular cleft defect to re-puncture the lobule. In the present study, it was recommended that all the patients should also wait for at least 2 months to repuncture the auricular lobule.

The satisfaction rate related to the cosmetic results of lobuloplasty has been reported as 92%-100%. The high level of satisfaction can be attributed to the small size of the surgical field, the simple and easy implementation of the techniques and the low rate of complications. 96 % of our patients were satisfied with the results of the lobuloplasty operation and others had manageable complications only.

Complication rates after lobuloplasty were reported between 0% and 33.3% 7, 8. Complications include hypertrophic scar, depressed scar, wide scars, recurrence of the cleft and wound infection. In the present study, 21 patients had a complication during the postoperative follow-up period, which was manageable. Ear lobe repair with cyanoacrylate or tissue glue without surgical sutures is also used for split ear lobule 11 but recurrence rate and skin reaction to the tissue glue should be kept in mind.

CONCLUSION: Auricular lobuloplasty via sandwich technique is an easy surgical procedure for the torn earlobe. This surgery has a low risk of complications with very high satisfactory results. It can also be done without advanced surgical instruments and surgical skills in the minor operation theatre. It should be recommended as 1st line of surgical treatment for split ear lobule patients.

ACKNOWLEDGEMENT: Authors would like to thank all the participants who gave consent to the study.