ABSTRACT: Solanum sisymbriifolium (Solanaceae) and Jatropha gossypifolia (Euphorbiaceae) have long been used in folkloric medicine for the treatment of various ailments. The purpose of the present study was to evaluate the cytotoxic activity of the plants and to make available the process of data analysis of cytotoxic studies to the researchers. A general toxicity of the extracts was assessed by a simple and low cost assay using brine shrimp lethality as an indicator of toxicity. Ethanol crude extract and fractions of the extract of leaves of Solanum sisymbriifolium exhibited relatively mild cytotoxic activity compared to that of flowers and fruits against brine shrimp larvae with median lethal concentration, LC50 values ranging from 10.10 – 321.35 and 13.19 – 80.16 μg/ml, respectively. Methanol crude extract and fractions of the extract of leaves of Jatropha gossypifolia exhibited significant toxicity against the shrimps (LC50 values 17.19 – 98.19 μg/ml), while that of potassium permanganate, a positive control, was 11.27 μg/ml. Among the fractions of the crude extracts of both plants, non-polar fractions such as n-hexane, chloroform, dichloromethane were the most cytotoxic. These results warrant follow-up through bioassay directed isolation of the active principles.

INTRODUCTION: Around half of the drugs currently in clinical use as anticancer drugs are of natural product origin, and it has been estimated that about 60% of new chemical entities (NCEs) introduced in the 1981-2002 period in this field were natural products or were derived from a natural lead compound 1. Therefore, the screening of traditional medicinal plants has great importance to identify new medicinal plants and to isolate new cytotoxic compounds for life threatening diseases like cancer. Among the cytotoxicity screening processes, brine shrimp lethality (BSL) bioassay represents a rapid (24 hours), simple (e.g., no aseptic techniques are required), easily mastered and inexpensive method. Moreover it requires small amounts of test material (2–20 mg or less) 2.

Brine shrimp has been used as a “bench top bioassay” for the discovery and purification of bioactive natural products 3. BSL bioassay was developed by Michael et al. 4 and modified by others 5,6. A positive correlation has been found between brine shrimp toxicity and 9KB (human nasopharyngeal carcinoma) cytotoxicity, and have been observed that ED50 values for general cytotoxicities are about one-tenth LC50 values in the brine shrimp test 5, 7.

Since its introduction, this in vivo lethality test has been successively employed for providing a frontline screen that can be backed up by more specific and more sophisticated bioassays once the active compounds have been isolated.

Solanum sisymbriifolium is a well known remedy in the ayurvedic and folkloric system of medicine for the treatment of various types of disorders. The leaves of S. sisymbriifolium are used as diuretic in Brazil and febrifuge in Peru 8, while in India, flowers are used in traditional medicine as analgesic. The fruits of the plant are edible and unripe fruits are used as a vegetable. The roots have been reported to use as an emenagogue, fertility regulator, analgesic, hysteria, contraceptive, antisyphilitic and hepatoprotective in Argentina 8. The roots also possess diuretic and hypertensive properties and used in Paraguayan traditional medicine. In Argentina, aerial parts of the plant are used to treat diarrhea, infections of respiratory and urinary tracts 8.

Much like other members of the family Solanaceae, S. sisymbriifolium contains several secondary metabolites such as alkaloids, flavonoids, steroids and tannins 9. The main chemical components of this plant have been reported by other researchers include solasodine (leaves) 8; sisymb­­­rifolin, carpesterol and solasodine (fruits) 10,11; cuscohygrine, solacaproine, isonuatigenin-3-O-β-solatriose (roots) 8,12. The wide variety of the traditional uses of the plant may be due to the presence of these phytochemicals. Pharmacological studies have demonstrated that S. sisymbriifolium known to possess antinociceptive 9, antihypertensive 12, cardiovascular 13, molluscicidal 14, cytotoxic 15, sedative and anticonvulsant 11 activities.

Different parts of Jatropha gossypifolia are used in traditional medicine in different countries to alleviate several ailments. The bark is considered an emmenagogue 16 and had been used to procure abortions. The leaves and seeds of J. gossypifolia are considered a purgative and are widely used to treat obstinate constipation. The leaves are also traditionally employed as febrifuge in intermittent fevers and swollen mammae 16 and also applied to sores, rash, boils, carbuncles, eczema, itches and veneral diseases in Latin America and the Caribbean 17. Seeds are emetic, purgative and used for cancer and body pain 16.

The oil obtained from them is used in indigenous medicine as an external stimulation, application in constipation, rheumatism and in paralytic affections, also in skin diseases 16. Roots are used to treat leprosy 16.

Stem sap used to stops bleeding and itching of cuts and scratches 17. The stem latex also has been shown to possess coagulant activity 18.

The wide variety of the traditional uses of the plant may be due to the presence of various phytochemicals in the plant like alkaloids (jatrophine), lignan (jatroiden) 18, flavonoids, saponin, histamine, resin, tannin, curcin, jatrophone, jatropholones A and B, jatrophatrione, apigenin Cyclogossine A 19. To establish its traditional uses, J. gossypifolia has been investigated for its anti-allergic, molluscicidal, antimicrobial, insect repellent 19, larvicidal activity and antifeeding 20, coagulating and anti-coagulating 17 activities.

The objective of this research work was to investigate the cytotoxic activity of the crude extracts and different solvent soluble fractions of crude extracts of Jatropha gossypifolia and Solanum sisymbriifolium. Moreover, through this report the process of calculation of LC50  i.e., the dose that will kill 50% of animals of a particular species would be more available to the researchers.

Plant Collection and Identification: The leaves, flowers and fruits of S. sisymbriifolium and leaves of J. gossypifolia were collected in the month of August, 2011 from Dhaka and Jhenidah, Bangladesh respectively. Collected plants were identified by a taxonomist (Dr. Bushra Khan, Principal Scientific Officer) from Bangladesh National Herbarium, Mirpur, where duplicate specimens for S. sisymbriifolium (Accession no. DACB-35894) and J. gossypifolia (Accession no. DACB-35937) have been deposited for future reference.

Preparation of Crude Extract: The dried, coarsely powdered plant materials (1 kg) were extracted by cold extraction process (5 L) over 72 hour period using ethanol as solvent for S. sisymbriifolium leaves, flowers & fruits and methanol assolvent for J. gossypifolia leaves at room temperature. The extracts were concentrated with a rotary evaporator (IKA, Germany) at low temperature (40-50oC) and reduced pressure. The dry crude extracts were kept in a refrigerator until use.

Partitioning of the Crude Extracts: Solvent-solvent partitioning was done by the modified Kupchan and Tsou method 21 by using a separating funnel. A portion (20 gm) of the crude extracts was triturated with 90% extraction solvents (methanol/ethanol) and the prepared solutions were then fractionated successively using solvents of increasing polarity. From each of the crude extract four fractions were obtained and fractions were evaporated to dryness by using rotary evaporator and kept in air tight containers for further analysis.

Brine Shrimp Lethality Bioassay: Artemia salina leaches (brine shrimp eggs) were collected and placed in one side of a small tank divided by a net containing simulated sea water (3.8% NaCl solution) at a temperature around 37oC equipped with constant oxygen supply by using an air pump for hatching and the pH of the hatching solution was maintained at 8.4 22. In the other side of the tank, a light source was placed to attract the nauplii. After 24 hours of hatching period, the nauplii were ready for the experiment.

4 mg of each of the samples was dissolved in 200 µl of dimethylsulfoxide (DMSO) and the volume was adjusted to 5 ml using simulated seawater (pH was adjusted to 8.4). So the concentration of the stock solution was 800 µg/ml. A series of solutions of lower concentrations were prepared by serial dilution with seawater.

From each of these test solutions, 2.5 ml solution were added to pre-marked vials containing 2.5 ml of seawater and 10 shrimp nauplii. So, the final concentrations of samples in the vials were ranges from 400 µg/ml to 0.781 µg/ml. In the control vials, same volumes of DMSO (as in the sample vials) were taken as negative control and different concentration of potassium permanganate (KMN) was used as positive control. The vials were kept for 24 hours, thereafter the active nauplii were counted with the aid of a 3x magnifying glass and the percentage of mortality (rounded to nearest whole number) at each dose and control were determined by using the following formula (a):

The mortality endpoint of this bioassay was defined as the absence of controlled forward motion during 30 sec of observation 23. The experiment was carried out in triplicate and the average values were noted.

Where, n= no. of test animal in each group.

Data must be corrected using Abbott’s formula (d) if there is more than 10 % mortality in the control 25.

The corrected % of mortality for each concentration was then transformed to probit by using Finney’s 26 probit table (Table 1).  The purpose of the probit transformation is to straighten the line so that the LC50 can be estimated more easily.

The LC50 values (concentration of sample required to kill 50 % of brine shrimp) were calculated using Microsoft Excel 2007 by a plot of probit against the logarithm of the sample concentrations.

Mean and standard error of the mean (SEM) were calculated using the formulas = average(range);

whereas confidence interval level of 95% was calculated using formula =

TABLE 1: TRANSFORMATION OF PERCENTAGE OF MORTALITIES TO PROBITS

RESULTS: The data obtained during BSL bioassay of crude ethanol extract of leaves of S. sisymbriifolium and the steps of the calculation of LC50 are presented in table 2 and figure 1. Besides the LC50 value obtained for the crude extract, the LC50 values of the fractions of the crude extracts and the positive control are also presented in table 3.

TABLE 2: RESULTS OF THE BSL BIOASSAY OF CRUDE ETHANOL EXTRACT OF LEAVES OF S. SISYMBRIIFOLIUM

TABLE 3: CYTOTOXIC ACTIVITY OF LEAVES OF S. SISYMBRIIFOLIUM a

TABLE 4: CYTOTOXIC ACTIVITY OF FLOWERS AND FRUITS OF S. SISYMBRIIFOLIUM a

TABLE 5: CYTOTOXIC ACTIVITY OF LEAVES OF J. GOSSYPIFOLIA a 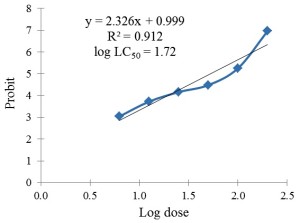 FIGURE 1: PLOT OF LOG DOSES VERSUS PROBITS FROM TABLE 2 FOR CALCULATION OF LC50 OF CRUDE ETHANOL EXTRACT OF LEAVES OF S. SISYMBRIIFOLIUM.

The crude extract and all the fractions of crude extract of leaves of J. gossypifolia exhibited (Table 5) significant toxicity to brine shrimp as the LC50 values were less than 100 μg/ml 27. Cytotoxic activity decreased with the increase of polarity of the fractions. The n-hexane, non-polar fraction of the methanol extract showed the most cytotoxic activity, which indicates that the responsible cytotoxic agent could be non-polar in nature.

The methanol extract of flowers of S. sisymbriifolium was reported to be highly cytotoxic 15 but the cytotoxic activity of fruits and leaves of the plant have never been tested.

Brine shrimp lethality bioassay indicates cytotoxicity as well as a wide range of pharmacological activities such as antimicrobial, pesticidal, antitumor, etc. 28. The plant extracts were found to show potent activity against the brine shrimp nauplii. Therefore the positive response obtained in this assay suggests that the plants may contain antitumor, antibacterial or pesticidal compounds.