Categories Menu
Home » ASSESSMENT OF DRUG USE PATTERN, THEIR COST AND SAFETY IN EMERGENCY DEPARTMENT AT A TERTIARY CARE TEACHING HOSPITAL, RAJKOT

ASSESSMENT OF DRUG USE PATTERN, THEIR COST AND SAFETY IN EMERGENCY DEPARTMENT AT A TERTIARY CARE TEACHING HOSPITAL, RAJKOT

ASSESSMENT OF DRUG USE PATTERN, THEIR COST AND SAFETY IN EMERGENCY DEPARTMENT AT A TERTIARY CARE TEACHING HOSPITAL, RAJKOT

ABSTRACT: Introduction: The practice of emergency medicine has the primary mission of evaluating, managing and providing treatment to patients with unexpected injury or illness. The emergency department of a tertiary care unit of a developing country is faced with the problem of heavy patient load and a paucity of human and economic resources. So, this study was conducted with the objective of Studying pattern of drug use, safety, and direct cost of treatment. Material and methods: This prospective observational study was conducted at the Emergency Medicine department of P.D.U Government Medical College, Rajkot over a period of one month. Demographic data, average stay, diagnosis and complete prescription was recorded in case record form. The Cost of individual prescription was calculated. Adverse drug reactions were also recorded. Result: A total of 1939 drugs were used in 200 prescriptions, with an average of 9.69 drugs per prescription. The most common route of administration of drugs was found to be intravenous injection 54.7%. 65.39% drugs were prescribed by a generic name. 95.5% drugs were from WHO essential drugs list. Cardiovascular emergencies were most common 36%. An average cost of Rs. 211.18 per patient per day. Total 22 adverse events were found. Drug-drug interactions were found in 32 cases. Conclusion: The prescription pattern of drugs showed polypharmacy as a concern with possibilities of drug-drug interactions and chances of increased cost which can be avoided. The average number of drugs per prescription was higher than the WHO recommends. Usage of a Generic drug was higher which is appreciable.

INTRODUCTION: The emergency department of a tertiary care unit of a developing country is faced with the problem of heavy patient load and relative paucity of human and economic resources. The practice of emergency medicine has the primary mission of evaluating, managing and providing treatment to those patients with unexpected injury or illness. Instituting appropriate therapy is necessary for safety of the patients and to decrease mortality and morbidity.

Clinicians often face challenges in pre-scribing the right medication and initiating the right therapy, especially when it comes to emergency care department where the chances of irrational prescriptions and errors usually happen 1, 2. Hence, it would be better to stick on to prescribing drugs by their generic names as it has been emphasized by the WHO in their essential drug list 3, 4. The practice of emergency medicine requires both a broad knowledge base and a large range of technical skills 5. Twenty four hours a day, seven days a week, hospital emergency departments (EDs) play an essential role in the health care delivery systems, treating patients with a wide array of health problems, ranging from stomach and chest pain to gunshot wounds and traffic accidents 6.

In Emergency department, doctor treat the patients, at the most vulnerable moments of their life. It faces the challenge of evaluating the early phases of the biological behaviour in diseases. In emergency department patients present with a wide range of diseases and the drug use is quite extensive. Therefore, evaluating the drug usage patterns and cost of therapy in the emergency department is very important. Possibilities of drug - drug interactions and adverse drug reactions due to polypharmacy 7.  So, this study was conducted with the objective of studying pattern of drug use, safety and cost of drug treatment.

MATERIAL AND METHODS: This prospective observational study was conducted with the objectives to evaluate the drug use pattern and the cost of treatment in patients admitted in the emergency department of P. D. U Government Medical College, Rajkot over a period of one month from 7th May 2016 to 7th June 2016. This study was carried out after obtaining approval by Institutional Ethics Committee (Human). Patients irrespective of gender, diagnosis admitted to emergency department was included in the study. Written informed consent from the patient/legal guardian was obtained. Demographic data such as patient initials, age, gender and occupation was recorded. Average stay in the emergency department, diagnosis of  the patient, comorbid conditions, Presenting complaints, complete prescription and investigations was recorded in case record form. Detailed information of drugs including name of the drug, dosage, route, frequency and duration of treatment was recorded in case record form. Distribution based on  total number of drugs prescribed, generic drug usage, average number of drugs per prescription, common routes of administration, common complaints, diagnosis and their therapy, percentage of drugs prescribed from WHO essential drugs list, average number of antibiotics per prescription. Drug-drug interactions were assessed via Medscape online drug interaction checker software 8.

For Cost Assessment: Cost of individual prescription was calculated by help of drug price list of hospital.  Adverse drug reactions was also recorded and causality assessment was done according to WHO-UMC scale.

RESULT: This prospective observational study was conducted in a tertiary care hospital for a period of one month, where the medical records of 200 hospitalized patients were reviewed for analyzing the prescription pattern during average stay of 1 and half day at the hospital. Out of 200 patients 148 were males and 52 were females. These patients were further categorized into various age groups as in Table 1.

A total 1939 drugs were used in 200 prescriptions, with an average of 9.69 drugs per prescription. The common drug groups used are shown in Fig. 1. The most common route of administration of drugs was found to be intravenous injection (54.7%). In this study 65.39% were prescribed by generic name compared to brand name. By using generic names of prescription chance of duplication of drug products is eliminated and cost to the patient decreases. 95.46% drugs was prescribed from WHO essential drugs list 9. System wise distribution of patients are shown in Fig. 2. 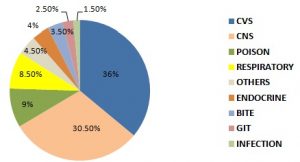 Morbidity pattern, number of drugs and treatment cost in emergency medicine department is shown in Table 3. Comorbid condition associated in 103 (51.5%) patients, in which hypertension was most common comorbid condition in 55 (53.3%) patients followed by diabetes in 42 (40.7%) and IHD in 35

(33.9%) patients. Average cost per patient per day was Rs. 211.18. System wise cost distribution is shown in Fig. 3. Total 22 adverse reactions were found. In which vomiting and abdominal discomfort due to anti-microbials in 7 cases, dryness of mouth due to atropine in 4 cases, bleeding at site of injection due to heparin and enoxaparin in 4 cases, fever and nausea due to IV fluids in 3 cases, headache due to nitrates in 3 cases and rash due to ASV (Anti-snake venom) in 1 case. The most frequently prescribed drugs were H2- blockers (95%) followed by anti-microbials (53%), I.V. fluids (46.50%), hypolipidemics (44.5%), Anti-platelets (40%), Nitrates (34.5%), β-blockers (27%). Approximately 106 (53%) of patients received anti-microbials in which third generation cephalosporin, ceftriaxone was the most commonly prescribed followed by metronidazole.  Table 3 shows system wise distribution of morbidity pattern, number of drugs and treatment cost.

Others include cases of pyrexia, weakness, jaundice, giddiness and electric shock

DISCUSSION: Study on drug use in emergency medicine is important not only for the emergency physicians, but also for the general practitioners, who are often the first responders to emergencies in the middle and low income countries 10.    Overcrowding in emergency departments is an issue that has a negative impact worldwide. As attendance in emergency departments has increased, the ability to provide critical services to patients suffering from actual medical emergencies in a timely manner has decreased as these departments are many times at or over capacity 11.

In this present study, the drug use pattern of emergency care drugs was studied in a tertiary care hospital for a period of one month. In a total of 200 cases, a total of 1939 drugs were prescribed, of which a majority of the drugs were purely prescribed based on the generic names. In our study hypertension (53.3%) was the most common comorbid condition.

The most common system was Cardiovascular followed by central nervous and poison. Amongest cardiovascular emergencies, ACS was most common diagnosis consisting about 59% of patients. The most common complaints amongst the admitted patients at the emergency department was chest pain followed by unconsciousness and convulsion. H2-blocker (ranitidine) and anti-microbials were among the top two common drugs prescribed accounting to 95% and 53%, respectively. The frequent explanation for H2-blocker given is gastrointestinal prophylaxis in order to inhibit gastric acid secretion and chances of nausea and vomiting in a majority of the cases 12, 13.

In this study mean number of drugs per prescription, which is an important indicator of the standard of prescribing was 9.69.  It is very higher whereas the WHO recommends an average number of drugs per prescription to be 2.0 14.  The reason for polypharmacy could be empirical therapy as the diagnosis may not be confirmed at the time of initial drug therapy.   Approximately, 106 (53%) of patients received antimicrobials. Overestimation of the severity of illness may be the main reason for such an empirical use of antimicrobials within few hour of admission. Antibiotic were prescribed in conditions with infective etiology use of antibiotic was justified in all cases.

Mean cost of drugs per patient per day was Rs. 211.18. Most of the patient’s condition stabilise in 24-48 hrs, they were transferred to the respective wards for further treatment or discharged. Deaths of 4 patients occur during treatment.  We did not estimate indirect cost like transport and other intangible costs, which if calculated will provide us more realistic picture of the financial burden to the patient. 22 adverse reactions were noted, causality assessment was done according to WHO UMC scale 15. Most common adverse reactions due to injection anti-microbials, injection atropine, injection heparin and enoxaparin, tablet nitrates, Intravenous fluids and injection anti-snake venom. When checked for drug-drug interactions via Medscape online drug interaction checker, the possibility of drug-drug intereactions were seen in a total of 32 cases (16%) of the 200 cases of which 15 could produce a moderately high drug-drug interaction.

CONCLUSION: In our study H2 blocker and anti-microbials were the most commonly prescribed drugs in emergency department. There is need to avoid overuse of H2- blocker and anti-microbials in emergency unit 16. The prescription pattern of drugs showed polypharmacy as a concern with possibilities of drug-drug interactions and adverse events in some of the cases which can be avoided. It increases cost of the therapy. The average number of drugs per prescription were higher whereas the WHO recommends. Generic drug usage was high compared to brand which is appreciable, by using generic names of prescription chance of duplication of drug products is eliminated and cost to the patient decreases.

ACKNOWLEDGEMENT: We are very grateful to Dr. Dharmesh Gohil, The Head of the Emergency Department, Rajkot, who allowed us to complete this study.

CONFLICT OF INTERST: There is no conflicts of interest.