ABSTRACT: Trichosanthes cucumirina L., locally known as “Chachindra” among the tribal and rural mass of Similipal Biosphere Reserve (SBR) forest. Plant parts are used as ethnomedicine among inhabitants of SBR. They use the fruits, leaves, and roots against various diseases and traditional practices are continuing since long. Leaves are used against microbial infections, roots against diabetic and fruits against the killing of stomach worm. Young fruits are used as vegetables as well as medicine. Keeping this traditional practice in view, assessment of food values, and antibacterial properties were done. Fruits are rich with carbohydrate (26.24%), lipid (2.20%), protein (1.50%), fiber (1.96%), and a good amount of moisture. Plant parts showed diverse bioactive compounds such as tannin, saponin, and flavonoid present in most of the extracts of leaves, fruits and roots of T. cucumirina L. The antibacterial activity of plant extracts showed excellent against MTCC 1252, MTCC 1457, MTCC 3906, MTCC 1926, MTCC *497. Presents study highlights the nutritional, ethnobotanical, and antibacterial activity of the plant and emphasis upon the conservation of this bioresource in the state in general and SBR in particular.

INTRODUCTION: Cucurbitaceae commonly known as “Guard family” of flowering plants in Plantae 1. It includes about 825 species in 118 genera currently recognized worldwide 2. In India, it represents 100 species belong to 36 genera 3 including 22 species in 12 genera 4 reported for Odisha. The family is known as; the species have wide uses, come in groups of economically important food plants, domesticated wild species, therapeutic medicinally important horticultural plants and common medicinal weeds.

Many researchers have paid attention to the Cucurbitaceae family because the fruits, leaves, root, and seeds are traditionally consumed as food and therapeutic medicine throughout the world. The major genera of the family are Trichosanthes, Lagenaria, Luffa, Benincasa, Momordica, Cucumis, Citrullus, Cucurbita, Bryonopsis Corallocarpus, etc. 1, 4, 5.

Among them, T. cucumirina L. Fig. 1 belongs to the genera Tricosanthes are very common in India in general and Similipal Biosphere Reserve (SBR), Odisha in particular. It is a climber, monoecious and annual herb with 2-3 branched tendrils.  The stem is slender and pentangled. Leaves are alternate, simple. Lamina is furrowed into 5-7 lobes. The petiole is 2-10 cm long and ex-stipulate. Flowers are unisexual Fig. 1, actinomorphic, pentamerous, and white.

Fruits are spindle-shaped, and rostate having greenish-white strips in raw and turn red while ripening 4-6. It is distributed in Bangladesh, Sri Lanka, Myanmar, Malaysia, Australia and throughout in India 7. It is also rich in Odisha and locally known as “Ban Chhachindra.” In Odisha, indigenous people traditionally use a wide range of plants, including cucurbits as food and medicine. These plants constitute a great reservoir of a wide variety of compounds which exhibit some medicinal and nutritive properties; thus are used as spices, food or medicinal purposes. Many of these indigenous plants contain bioactive compounds that show physiological activities against bacteria and other microorganisms and are precursors for the synthesis of useful drugs. Literature survey revealed that T. cucumirina L. possess the food and medicinal values. The parts of the plant have been used as vegetables and in various diseases among the rural and tribal communities of SBR. The communities are commonly using the plant parts in diabetic, gastroprotective, and muscle inflammation. Plant parts are also used as an antioxidant, in lipid-lowering, in treatments of wounds including boils, sores, skin eruption such as eczema and dermatitis 8-11. Keeping the rich distribution of the species in SBR and other parts of the state as well as food and pharmacological values of T. cucumirina L., an attempt has been made to evaluate its distribution in SBR, its ethnobotanical values, food and antibacterial activities against selected Gram-positive and Gram-negative bacterial strain.

Study Area: SBR is situated in the Mayurbhanj district of Odisha. Biosphere derives its name from the abundance of semul or red silk cotton that blooms vividly. Government of India declared SBR as a Biosphere Reserve in 1994. UNESCO (United Nations Educational, Scientific and Cultural Organization) added this National Park to its list of a Biosphere reserve in May 2009. 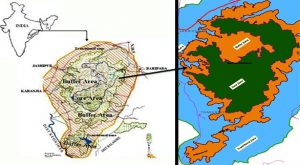 There are 10,000 people living in 65 villages inside the SBR Fig. 2. That is why SBR is yet to be declared a full-fledged park, despite its having the status of one of the fifteen biospheres of India. The park has a total area of 2,750 Km2. The average elevation is 559.31 meters. At least 12 mountain rivers cut across the plain area. The prominent among them are Budhabalanga, Khairi, and Deo 12-16. It has a mixed type of vegetation known as Orissa semi-evergreen forests with tropical moist broadleaf forest and tropical moist deciduous forest with dry deciduous hill forest along with high-level sal forests.

There are different types of tribal communities found in and around of SBR. Some of the tribes, namely Kol, Kharia, Mankdias, and Saharas, are still primitive in the state of living. They depend solely on their surrounding plants for their requirement of food and medicine 11.

Methodology: The present study is based on the field survey for collecting ethnobotanical data and lab work for investigation of bioactive compounds and antimicrobial activity.

Ethnobotanical Data of Collection: A fieldwork was conducted for the collection of ethnobotanical data from rural and tribal communities of SBR Fig. 3 and its adjoining areas (Jashipur, Karanjia, Bisoi Ghati, Hatibadi, Kendumundi, Manda, Angarpada and Padampur) during 2010-2013. The methodological framework was followed as per standard technique of ethnobiological approaches and Christian and Brigitte, (2004) 17. The information on plant parts used as a traditional medicine against different pathogens and disorders were collected through cross questioners with different rural and tribal communities of SBR and its adjoining areas. The pharmacological and medicinal properties of T. cucumirina L. were confirmed by cross-checking with informants. Plant species were identified by the second author and confirmed with the Flora’s Book 4, 5.

Collection of Plant Materials: Plant parts of T. cucumirina L. were collected from the Manda, Kendumundi Hatibadi and Padampur. Collected plant materials were thoroughly washed under tap water followed by distilled water twice and left for air dry. The dried plant parts were powdered by the mechanical grinder and kept in an airtight container for further work.

Preparation of Plant Extracts: As per polarity index, four solvents (n-butanol, acetone, methanol, and aqueous) were selected for extraction. Extraction was done using soxhlet apparatus followed by Tiwari et al., (2011) 18. The powder of plant parts was poured in the thimble at the ratio of 20 g per 250 ml of solvents. The collected residue was then dried at room temperature. The dried samples of extracts were weighed to get a yield of the extract and stored it in the refrigerator for further use.

Test for Tannin: 0.7 ml of the extract was dissolved in 50 ml of distilled water and was heated for 10 min. After cooling a few drops of 1%, ferric chloride was added.

Color of the sample was changed from yellow to green, and the dark green precipitate was observed indicating the presence of Tannin.

Test for Saponin: 5 ml of extract was dried and to it was added 1ml of Ethyl acetate. Ethyl acetate was removed, and distilled water was added. The mixture was shaken vigorously and observed. The persistent foam which lasted for at least 15 min confirmed the presence of Saponin.

Test for Flavonoid: 0.5 gm of leaf extract was taken in a flask and dissolved in 10% NaOH. Few drops of HCl was added. The yellow color turned to colorless confirmed the presence of Flavonoid.

Test for Terpenoid: 1ml of the extract was mixed with 400 μl chloroform. Then the mixture was added by a drop of sulphuric acid. A reddish-brown interface indicated present of terpenoid.

Test for Alkaloids: 0.5 gm of each crude extract was stirred with 5 ml of 1% aqueous HCl and heated on a water bath and then filtered. 1 ml of the filtrate in a test tube and 2-5 drops of Dragendorff’s reagent was added. Occurrences of orange-red precipitated indicate the presence of alkaloid.

Test for Phenolic Compounds: 0.5 gm of the extract was treated with 3-4 drops of ferric chloride solution. Formation of bluish-black colour indicates the presence of phenolic compounds.

Test for Steroids: 0.2 g of each portion, 2 ml of chloroform was added, the solution was cooled well in ice followed by the addition of conc. H2SO4 carefully. Two layers of red and green were developed which indicated the presence of a steroidal ring.

Antimicrobial Activity: The extracts of leaves and root of T. cucumirina L. were screened for antibacterial activity against 2 Gram-Positive bacteria Streptococcus pyogenes (MTCC 1926), Streptococcus mutans (MTCC *497) and 3 Gram-Negative bacteria Salmonella enteric typhi (MTCC 1252), Vibrio cholera (MTCC 3906) and Shigella flexneri (MTCC 1457). Antimicrobial activity was done using Agar Well Diffusion assay adapted from Allen et al., (1991) 21 with slight modification. Wells (6mm) were made using sterile borer. Stock solutions of samples were prepared in 100 % DMSO (Sigma), and twofold serial dilutions were made in the amount of 100 µl per well ranged from 0.25 and 0.5 mg/ml. 100 µl of samples were added by sterile syringes into the wells in three above mentioned concentration and allowed to diffuse at room temperature for 2 h. Plates were incubated at 35 ± 2 °C for 18-24 h. Triplicates were maintained, and the experiment was repeated thrice, for each replicates the readings (diameter of zone of inhibition in cm) were taken, and the mean ± SD values (diameter of zone of inhibition) were recorded.

Data Analysis: Mean and SD (standard deviation) were performed to evaluate triplicate values of the zone of inhibition (cm) of samples using Excel, Microsoft Corporation-2010, US).

RESULTS AND DISCUSSION: T. cucumirina L. is very common in India and SBR. The field survey revealed that the richness of T. cucumirina L.  was rich in peripheral regions Table 1 followed by buffer and core regions of SBR. It is indicated, it grows more near villages and light in the forest. The plant is rich in Bisoi ghati, manda, Padampur, Kalika Parsad and Karanjia villages of SBR. The palatability as the food was not good; authors got from two peripheral areas and selected locations that fruits used as food. The Santhal communities of Padampur, the peripheral region of SBR use its young fruits as vegetables.

The ethnobotanical survey indicated that T. cucumirina L. is very popular as a medicinal climber among the tribal communities of SBR and its adjoining areas. The leaves are used against wounds, swelling, and different types of skin infections Table 3.

Fruits are used to balance sugar level among the Santhal communities of Handipua village. Roots are very useful against diabetic and to kill lice. The medicinal values with collection sites and information on Informants are listed in Table.

TABLE 3: ETHNOBOTANICAL VALUES OF TRICHOSANTHUS CUCUMIRANA L. AMONG THE TRIBAL AND RURAL COMMUNITIES OF SBR AND ITS ADJOINING AREAS 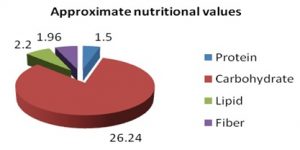 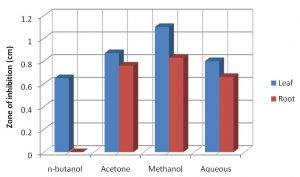 FIG. 5: ANTIBACTERIAL ACTIVITY OF ROOT AND LEAF EXTRACTS OF T. CUCUMIRINA AGAINST STREPTO-COCCUS PYOGENES AT CONCENTRATION OF 0.5 mg/ml

CONCLUSION: The plant possesses sound ethnobotanical values and its parts used in various disorders and microbial infections. Extracts of leaves and root have excellent antibacterial activity against gram-positive and gram-negative bacteria.

Therefore isolation, purification, and characterization of bioactive compounds from plant parts of T. cucumirina will be helpful to formulate new drugs to fight against microbial infections. The present study also gives attention to the conservation of such wild plants for proper utilization of bioresources available in SBR and its adjoining areas.