ABSTRACT: Diabetes mellitus is a lasting metabolic disability regarding enhance etiology and permanent degenerating complications. Sexual abnormalities (Hypogonadism, infertility, etc.) are outfit a two of the discombobulate ingenious stringency of diabetes mellitus. Different hypoglycemic agents are used to control diabetes mellitus, but very few formulations are available to treat secondary complications. Results of the present study establish the anti-diabetic properties of Camellia sinensis and its impact on the male reproductive systems of the streptozotocin-induced diabetic male rat.

INTRODUCTION: Diabetes mellitus (DM) is a disease that deals with a chronic metabolic disorder involving carbohydrate, lipid, and protein by the occurrence of insulin scarce or disorder. Other conditions like arteriosclerosis (hardening and loss of elasticity of the wall of arteries), nephropathy (kidney damage), neuropathy (peripheral nerve dysfunction), and micro-angiopathy (thickening and weakening of capillary walls) can also be devoted through DM 1. It is also associated with an increased incidence of cardiovascular disease, reduced life expectancy, giant morbidity due to specific diabetes-associated microvascular compli-cations and dwindled high-quality lifestyles 2.

A link of DM with sexual dysfunction was perceived earlier in the 10th century when Avicenna reported that “collapse of sexual function” as a precise problem of DM 3. Prolonged DM may lead to conditions such as impotence or erectile dysfunction, ejaculation disorder (premature or delayed ejaculation), and a decreased libido 4. DM is responsible for biochemical variations and other pathological changes, which finally disturb male fertility.

The sexual dysfunctions such as spermatogenesis, retrograde ejaculation or erectile dysfunction occur, and these end up with decreased sexual appetite in diabetic individuals. DM results in altered pathways by multiple molecular mechanisms with dramatic consequences to male reproductive functions. Alteration in testicular cells is concerned maximally with glucose metabolism as glucose homeostasis plays a critical role in sub-fertility and fertility 5. Camellia sinensis is commonly referred to as green tea, the world's widely consumed beverages. Dried leaves of green tea (CS) contain active components like polyphenols (30%-36%). Flavanols present in a high amount which mostly known as catechins. The sub-category of catechins is epicatechin-3 gallate (ECG), epigallocatechin (EGC), epigallocatechin-3-gallate (EGCG) and epicatechin (EC).

An accomplice, EGCG, ameliorates cytokine-induced β-apartment execration in-vitro and prevents the obligation of ait hoard induced by sedative encircling go together wretched doses of streptozotocin in-vivo 12. Most of the complications of DM have been studied widely, but sexual dysfunctions are still incompletely understood in the male with relation to plasma levels of testosterone, FSH and LH 13. Modern societies concede a more in-depth look into the rate of fertility that revealed highly increased frequency of DM, which further has been correlated with falling fertility and birth rate 1.

Animals: Male Sprague-Dawley rats of weight (220-320 gm) and age three months, were obtained from NIPER, Mohali, Punjab. Rats were grouped into four groups of six animals and kept in steel cages; each cage consists not more than three rats in an air-conditioned room (22 ± 3°C, 55 ± 5% humidity and a 12-h light/dark cycle). A healthy diet and water ad libitum were given for feeding animals.

Following the rules of the Institutional Animal Care Committee (LPU/LSPS/IAEC/CPCSEA/ Meeting No 5, Jan 2015, Protocol No. 7) and the principles outlined in the declaration of Helsinki, all experimental processes were carried out.

Induction of Diabetes: Streptozotocin dose was prepared by dissolving in normal saline at room temperature and placed the solution over the ice pack. It was always prepared freshly for immediate use and injected by intraperitoneal routes, in overnight fasted male rats. The doses were determined according to the bodyweight of animals 14.

Experimental Design: The experimental rats were grouped into four groups containing six animals in each group.

Group I: Non-diabetic rats with Normal diet and no dose (Normal control).

Preparation and Administration of Green Tea Extract: Green tea extract (200mgkg-1 bw) was fed orally during the entire tenure of the experiment using an infant feeding catheter (3 mm size) attached to a sterile syringe. The catheter was inserted into the gastric region of rats, and 200 mg kg-1 bw of GTE was discharged gradually into each test animal.

Determination of Body Weight, Glucose, Protein, Albumin, and Globulin: The experimental rats were weighed on 1st, 7th and 14th day using a top pan balance. The rats were anesthetized at the end of the experimental period, and samples of fasting blood were taken straight from the cardiac. For 15 min the blood samples were centrifuged at 3000 rpm, and for further biochemical analysis, the serum was separated. Serum glucose was estimated using GOD-POD method and expressed in mg/dl. Total protein was assessed using the Biuret method. Albumin and globulin were determined using dye bromocresol green and standard method 15.

Biological Assays of Total Cholesterol and Triglycerides: The serum was used for the estimation of lipid profile. Total cholesterol (TC) and triglycerides (TG) were estimated by standard procedure (direct method).

Statistical Analysis: Statistical analyses of initial day, 7th day and 14th day on said parameters were carried out using Microsoft Excel 2007 and expressed in Mean ± SEM, t-test and one way ANOVA, with p<0.05 was considered to be statistically significant. 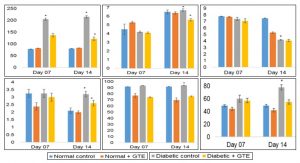 Values are expressed as mean ± SEM (n=6); superscript * is significantly different at P<0.05 when compared to control. One-way analysis of variance was used followed by the post-hoc Tukey multiple comparison tests.

Effect of GTE on Certain Biochemical Parameters: Results of GTE on different biochemical parameters such as blood glucose, protein, albumin and globulin values have been presented as mean ± SEM. Fasting blood glucose, albumin, triglyceride and total cholesterol were found to be increased in diabetic subjects whereas protein content and globulin showed reverse values which were further improved by GTE treatment. The decreased level of protein and increased level of glucose level in diabetic subjects were statistically significant (p<0.05).

Effect of GTE on Serum Testosterone: Effect of GTE was evaluated on the 14th day of the experiment and expressed in ng/dl. The serum testosterone of the control group ranged between 45 and 40 ng/dl, whereas treated group showed meager value in the diabetic group and diabetic treated subjects.

DISCUSSION: Diabetes mellitus is an idiopathic disease that deals with the chronic metabolic disorder involving carbohydrate, lipid, and protein metabolism alterations and by the occurrence of insulin deficiency or dysfunction. Its prevalence has been increased more rapidly day by day. DM is responsible for biochemical variation and other pathological changes that affect male fertility. The sexual dysfunctions such as spermatogenesis, retrograde ejaculation or erectile dysfunction occur and these end up with decreased sexual appetite in diabetic individuals 16.

DM results in changed pathways by multiple molecular mechanisms with dramatic consequences to male reproductive functions. DM decreased sperm quality and functioning competitively to normal. Alteration in testicular cells is concerned with glucose metabolism. Specific mechanisms related to hormonal control and glucose sensing machinery may also play a critical role in sub-fertility and fertility correlated to DM. Many other reports also identify that the DM correlates with the degradation of hormones, particularly sex hormones, reduction in motility and vitality of semen and declined semen ejaculation without the change in viscosity of sperm. Alteration in insulin can change the primary sexual glands functions and testicular functions, which cause concentrated seminal insulin than serum insulin 1, 4.

The experimental rats were divided into four groups, each group containing 06 animals. The total experimental protocol was maintained for 14 days after the induction of diabetes. A normal rat has a blood glucose level of around 100 mg/dl (ranging from 60-130 mg/dl) after 4-h of fast, which is close to humans, where 80-120 mg/dl is considered to be normal.

In this study, GTE powder at a dose of 200 mg kg-1 bw was evaluated in normal and diabetic rats. The control animal showed 78 ± 17 - 80 ± 16 mg/100 ml of blood glucose during the experiment, which was found to be increased to 80 ± 16 mg/100ml at 14 days of Group-I. There was a decreasing trend in the blood glucose level in Group-IV when diabetic rats supplemented with GTE powder. It has been seen that treatment with GTE powder brought down FBGL from a higher value on the 14th day. The results are in agreement with the other worker 18.

Onakpoya et al., 19 have discussed the modulation of lipid after prolonged intake of green tea. The total serum protein of control rats showed 7.8 ± 0.03 to 7.5 ± 0.04 gm/dl at 14thday. The total protein in diabetic subjects was found to be decreased which was ameliorated after treatment with GTE. The reduction of total protein in serum was significant in diabetic subjects (p<0.05). There was an insignificant change in protein value when normal subjects are treated with GTE.

Prasanth et al., 2019 20 reported that increased consumption of green tea is related to decreased serum concentrations of total cholesterol and triglyceride. The serum testosterone of control group ranged between 45 ± 0.8 and 40 ± 0.7 ng/dl respectively, and the treated group showed drastically low down the value in diabetic group, and treatment with GTE have not so much pronounced when compared with normal.

To conclude it can be said confidently that GTE powder supplementation plays a beneficial role in maintaining blood glucose level and decreased body weight in streptozotocin-induced diabetic rats.

CONCLUSION: From this study, it can be concluded that oral treatment with GTE to diabetic rats modulates physiological and biochemical status. Results unmasked effects of GTE against DM and warrants further investigation at wider dose regimens and extended duration in other test animals.

ACKNOWLEDGEMENT: Authors are thankful to the Head and Dean, Lovely Faculty of Applied Medical Sciences, Lovely Professional University, Punjab for providing laboratory facilities, including all accessories for the present study.