ABSTRACT: Now days the potential toxic effect of heavy metals in the aquatic organisms has been intensively studied. The present study was aimed to determine the  proximate composition and the heavy metal concentrations (Cd, Pb & Cr) of three different marine fish species Grey mullet (Mugil cephalus), Red snapper (Lutjanus sanguineus), and Indian sardine (Sardinella longiceps) along with the water  sample collected from the  southeast coast region located in Pondicherry state.  These results revealed that the proximate composition of L. sanguineus had higher protein content (19.98%) and S. longiceps had higher fat content (10.03%), Fresh M. cephalus had higher moisture content (84.04%) whereas L. sanguineus had the highest ash content (2.59%) respectively. The metal concentration in seawater was found in the following order: Cr 0.91±0.04 > Cd 80±0.03 > Pb 0.08±0.01. The biomonitoring of the heavy metal concentration in the fish falls in the following order: Chromium 1.62±0.57 (Mugil cephalus) > 1.12±0.32 (Sardinella longiceps) > 0.90±0.04 (Lutjanus sanguineus). Lead 0.17±0.04 (Sardinella longiceps) > 0.33±0.07 (Lutjanus sanguineus) > 0.33±0.07 (Mugi cephalus). Cadmium 1.87±0.25 (Mugi cephalus) > 0.43±0.28 (Sardinella longiceps)> 0.14±0.09 (Lutjanus sanguineus). This investigation indicates that there was a significant difference (p<0.05) in the concentration of lead (Pb), chromium (Cr) and cadmium (Cd) in different fish species and sea water. The results of sea water analysis shows that the heavy metals concentration was present within the permissible level recommended by WHO and FAO.

INTRODUCTION: Fish comprise a rich source of protein and also have other essential nutrition. When compared to other animal meat, fish meat is low expensive 1 and fish play an important role in human diet. Hence the consumption fish is increased now days 2, the determination of proximate composition of some fish such as protein content, water, lipids, moisture contents and ash percentage is frequently essential to ensure that they meet the necessities of food regulations and commercial purpose 3.

On the other hand, heavy metal pollution has turn into a major problem in the ecosystem, it extending to every part of the world, because it cannot easily degradable and also it affects the aquatic organisms due to their toxic effects 4. For the assessment of the level of metal pollution fish and water sample can be considered as major source in the aquatic environment 5. The bioaccumulation of heavy metals in the fish samples may be due to the industrial, domestic and agriculture effluents thrust in near water bodies 6-12.

There are essential metals and non- essential metals which are all have strongly toxic to aquatic organisms such as fish 13. The essential metals are copper, iron, zinc, manganese, while mercury, lead and cadmium are highly toxic metals 14. Because of high consumption of fish, the heavy metals from the fish sample will penetrate in human body, if it is present at high concentration they will cause many adverse and toxic effects 15. So the analysis of heavy metal concentration should be very important in commercial and edible fish and water sample to evaluate the various disturbances or serious diseases for human health 16. Water, temperature, water velocity and clarity, alkalinity and accessible habitation are the most important factors affect the fishes from one area to another   area 17. Therefore, this study was undertaken to make available information on the proximate values and the current level of heavy metal contamination in water and three different fish species.

Sampling site: The study location kalapet sea area is located in south eastern part of Pondicherry within 11o 53, N: Long 79o 49,E. It is used for irrigation and fisheries. Pondicherry (Kalapet) coastal area is polluted by the discharge of bulk quantities of industrial, domestic and agricultural wastes directly into the sea. Some major and some small industries such as Anglo French textiles, Chemfab Alkaline, Pondicherry Paper Mills, SICA breweries (nearly 16) and ponds and soap division, Golden Paper Boards, Shasun Durgs etc, are situated in this area. All the industrial and domestic wastes are discharged into the sea through four major drains viz. Vaithikuppam drains, Kurachikuppam drain, Grand Canal drain and upper canal drain. Three fish samples were also caught from the same localities. Water and fish samples were collected during the month of February 2016.

Sample collection and digestion for heavy metal analysis: One liter capacity of bottle was used to collect water.  Before collecting the water samples, the bottles were pre-conditioned with 5% nitric acid and then bottles were rinsed with distilled water at least for three times. The collected water samples were placed in an ice bath and brought it to the laboratory 18.

A total of 40 fish samples of three different species Red snapper (Lutjanus sanguineus), Grey mullet (Mugil cephalus) and Indian sardine (Sardinella longiceps) were collected from kalapet area of southeast coast located in Pondicherry state by local fishermen. Fish samples were taken to the laboratory in an ice box on that day itself. After the measurements of mean length and weight of the fish samples, the fish scales were removed where applicable, washed with running tap water to remove sticky substances. The whole body of different fish was then separately oven dried at 105oC for analysis of moisture content until the constant weight was obtained and ground into powder were stored in plastic bags and freezed until analyzed 19.

About 1 g of the dried sample was digested with 20ml of 4:1 mixture of nitric acid and perchloric acid on hot plate. This digestion was repeated for several times until the supernatant solution become clear. The supernatant can be filtered if necessary, by using cotton. The filtered sample can directly be aspirated for metal analysis into a Atomic Absorption Spectrophotometer (AAS) 20.

RESULTS AND DISCUSSION: The ecosystem especially the aquatic environment is severely affected by the heavy metals and has become the world wide problem now days.  It is necessary to test the water sample used for fishering. So sea water sample has been tested for different physio – chemical parameters.

Table 1 shows the physiochemical analysis of sea water. In this sea water appearance was found to be colorless and clear, whereas acceptable limit and permissible limit shows negligible colour. Sea water does not exhibit odour, whereas acceptable and permissible limit exhibit odour and temperature was found to be 32oC in sea water. Electrical conductivity of the sea water was found to be 44200 micro respectively, since electrical conductivity is a useful parameter of water quality for indicating salinity 22. It is related to the amount of total dissolved solids in the water which has ionic salts of 30940 mg/l.

Values are mean of triplicate determinations on a dry weight basis ± standard deviation. 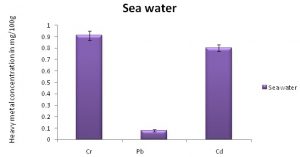 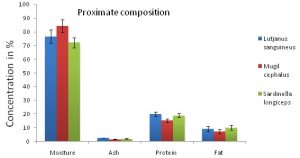 Values are mean of triplicate determinations on a dry weight basis ± standard deviation. 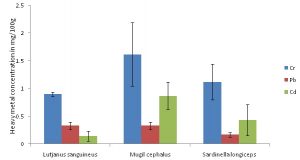 The proximate composition of three different species of marine (sea) fishes are given in Table 3. The average length of the fish species ranges from 15 ± 0.8 to 19 ± 17 cm, which was found to be medium sized fishes respectively. The average weight of three fish species has been examined. In this Mugil cephalus has an average weight of 70.15 ± 5.7 and it was the largest fish whole Lutjanus sanguineus was the smallest fish having 45.32 ± 6.5 whereas Sardinella longiceps have 50.15 ± 5.7 which was found to be medium sized fish.

Gopakumar 24 reported lower content of water (<90) with high lipid and protein contents in lantern fish (Benthosemapterotum). But in the present study we observed that the fishes had the elevated moisture content compared to the fat content which was found to be low. Moisture content was found to be more or less similar in all the fishes and variation in fish samples 25.

Changes in ash content: Mineral content can be measured by ash in any food including fish 26. Ash content was found to be high in Lutjanus sanguineus (2.59±0.09) where Mugil cephalus (1.48±0.18) and Sardinella longiceps have more or less similar ash content.  The ash content of the species is an indicator of the mineral concentration in the fish species. Emmanuel et al 27 reported that fish species contain wealthiest sources of minerals. In the present study we found that the ash content varies from (1.48± 0.18 to 2.59±0.09%), this results gave an indication, that the fish samples are the good sources of minerals. Asuquo et al 28 stated that fresh water species contains low ash content compare to marine aquatic species, because they live in high salinity environment. The ash content for all the three fish samples observed were not exceeding the world health standard above 5%. Compared with three fishes the red snapper (Lutjanus sanguineus) has high ash content compared with the other two fishes.

Changes in protein content: The knowledge of biochemical components such as protein and fat are fundamental for body growth and maintenance. Protein is essential for the nourishment of life and survives in largest quantity of all nutrients as a constituent of the human body. The average protein content of the fish species ranges from 15.2±1.38 to 19.98±1.56. Among this Lutjanus sanguineus was found to have high protein content. Mazumder et al 29 has reported protein content of commercial fishes of sardine 20%. Sea water and freshwater makes the fishes as a important living resources of dietary protein30.

Changes in fat content: Lipids are extremely proficient source of energy and they contain more than twice the energy of proteins. The average fat content of fish species ranges from 7.24±1.53 to 10.03±1.81. Among this sardinella longiceps was found to have high fat content when compared to the other two species. Raj kumar et al 31 reported the lipid content in Repanarapiformis ranged from (0.85% to 2.12%) in male and 0.95 to 2.96% in female. In general fat content variations of the fish species are significantly higher than that of other parameters. This could be due to the inherent differences in the species, seasonal as well as geographical changes, changes in age and maternity within the same species may also contribute to the differences in the fat content 32. The present study we have observed that the lipid content was present in the lower level compared to the protein content.

Metal concentration of fish species: Mean concentrations of chromium, lead and cadmium in whole fish of Lutjanus sanguineus, Mugil cephalus and Sardinella longiceps from the coastal waters are given in Table 4. Heavy metal pollution in the marine environment is determined by measuring its concentration in water and living organisms.

In general Cr concentration was found to be high in Mugil cephalus (1.62±0.57) than other two species. Likewise Pb concentrations (0.33±0.09) were found to be high and similar in Lutjanus sanguineus and Mugil cephalus. The levels of lead in three fish sample were less than those recommended by European commission (EC) 2001 guideline and FAO. sivaperumal et al 33 reported the accessible level of lead in fish 0.4 &0.5 mg/kg &chromium 0.5mg/kg. The maximum permissible levels of lead and cadmium in fish for human expenditure specified by European Union are 0.2 and 0.05 mg/kg respectively. Our findings also falls within the permissible limit. Cd concentrations of Mugil cephalus was found to be (0.87±0.25), which was found to be high than Lutjanus sanguineus (0.14±0.09) and sardinella longiceps (0.43±0.28) respectively. ATSDR 34 reported that Cd level in aquatic ecosystem is only in trace quantity. Similarly, findings from local studies on coastal water fish reported lower range of Cd level in fish 35. Burger et al 36 also reported that fishes are good indicators for heavy metal pollution in marine organisms. Because they live in different tropic levels with hold opposing views of sizes and ages.

Thus the concentrations of several metals were significantly different among the three fish species in sea water. Mainly this is due to the seasonal and biological differences like species, size, food source and environmental conditions like water chemistry, salinity, temperature and contaminants 37.

CONCLUSION: From this study, it was inferred that the sea water has the prominent physio-chemical characteristics. Among three fish species Mugil cephalus has the highest metal concentrations. Likewise Lutjanus sanguineus was found to have highest proximal concentration of moisture, ash and protein contents, whereas sardinella longiceps has the highest fat content. The total calorific value of these food fishes are mainly influenced by the total fat content and also to a greater extent by total proteins. However further studies are required to justify the nutritive value of different the fish species.

ACKNOWLEDGEMENT: The authors are grateful to the authorities of St. Joseph’s college of Arts and Science, Cuddalore for providing all facilities and encouragement to carry out the research work.