Background: Job satisfaction represents one of the most complex areas facing today’s managers when it comes to managing their employees.  The level of job satisfaction among pharmacy personnel is of importance because it may affect performance and retention.

Objective: To assess the level of job satisfaction and factors associated with it among pharmacy professionals working at selected health facilities in south west Ethiopia.

Method: Institutional based cross sectional study was conducted among pharmacy professionals working in selected towns, Jimma, Agaro and Limmu Genet, of Southwest Ethiopia from June 30-July 15, 2011 using self-administered semi-structured questionnaires. Statistical analysis was carried out using the Statistical Package for the Social Sciences (SPSS), version 16.0. Participants’ written informed consent to participate in the study was obtained after explaining about the purpose and procedure of the study.

Conclusion: More than half of therespondents were satisfied about their job which was explained by helping the needy and professional gratification. More than one third of the participants were dissatisfied mainly due to inadequate salary and lack of adequate interaction with other health care team member. Thus, policy makers and health service managers should act in order to improve the quality and quantity of health care services.

Research has demonstrated the importance of job satisfaction to an organization in terms of its positive relationship with individual performance, productivity, employee relations, physical and mental health and life satisfaction 2, 3.

Human resources are at the very heart of a health system. Health systems cannot function effectively without sufficient numbers of skilled, motivated and supported health workers 6. Job satisfaction is inextricably linked to motivation, and both involve cognitive, affective, and behavioral processes, with worker motivation commonly understood as the reason why workers behave as they do towards achieving personal and organizational goals. Neither job satisfaction nor motivation is directly observable, but both have been identified as critical to the retention and performance of health workers 7.

According to the study conducted in US, most respondents were satisfied with their positions, with 68% “more” satisfied and 32% “less” satisfied. Pharmacists in independent and inpatient hospital pharmacies reported the highest rates of satisfaction (80% and 78%, respectively) while pharmacists in chain pharmacies reported much lower rates of satisfaction 53% than those in all other settings (P<0.05) and were 66% less likely to be satisfied than those in independent pharmacies 9.

In contrary, a study conducted in Great Britain concerning the link between job satisfaction and intentions to quit the profession, pharmacists appeared to be satisfied with their work, although female pharmacists were more satisfied than their male counterparts. Pharmacists working in the community sector were less satisfied than those in other sectors. Salary was consistently ranked as one of the aspects of their work that pharmacists found least satisfying, regardless of age, sex, or sector of practice. Strength of desire to practice pharmacy was a predictor of both job satisfaction and intentions to quit pharmacy 10.

Health worker motivation reflects the interactions between workers and their work environment. Because of the interactive nature of motivation, local organizational and broader sector, policies have the potential to affect motivation of health workers either positively or negatively, and as such to influence health system performance. Yet little is known about the key determinants and outcomes of motivation in developing and transition countries 12.

A key constraint to achieving the millennium development goals (MDGs) is the absence of a properly trained and motivated workforce. Loss of clinical staff from low and middle-income countries is crippling already fragile health care systems. Health worker retention is critical for health system performance and a key problem is how best to motivate and retain health workers 13.

At the heart of each country’s health system, health workers Struggle to provide high-quality care to growing patient loads in increasingly challenging working conditions. In developing countries, especially in sub-Saharan Africa, pharmacists were facing shortages of supplies, poor compensation, inadequate management systems, and heavy workloads. Job satisfaction among employees is an indicator of organizational effectiveness, and is influenced by organizational and dispositional factors 14, 15.

In Southwest Ethiopia, there was no study done addressing job satisfaction of pharmacy professionals, which is a vital for health care system quality improvement and achieving definite outcome of the patient in the health institution. Thus, the aim of this study is toassess the level of job satisfaction and factors associated with it among pharmacy professionals working at selected health facilities in south west Ethiopia.

MATERIALS AND METHOD: Health facility based cross sectional study was conducted in three selected towns of Southwest Ethiopia: Jimma, Agaro, and Limmu Genet towns, on drug dispensers working at health facilities from Jun 30-July 15, 2011.  The total population of the three towns were 179,222 and the total number of pharmacy professionals (druggists and pharmacists) working both in the private and public health institutions in the study area were 102,with pharmacy professional to population ratio of 1:1757 in this specific study area. All pharmacy professionals who were available at each health facility during data collection period were included in the study.

The authors defined the following terms for the ease of understanding of this research work: Druggist as a diploma holder person in pharmacy licensed to prepare, and dispense drugs upon written order (prescription) from a licensed practitioner such as a physician, dentist, health officers and nurses. Health personnel as men and women health professionals working in the provision of health services. Independent pharmacies are pharmacist-owned, privately-held businesses in varying practice settings. In-patient pharmacy is the main primary unit which supplies drugs to patients in the wards and specialized clinics in the hospitals.

Job satisfaction is a state of being satisfied by individuals for opportunities that he/she achieves success in his/her life. Motivation is internal and external factors that stimulate desire and energy in people to be continually interested in and committed to a job, role, or subject, and to exert persistent effort in attaining a goal. Pharmacist is degree holder person responsible to prepare, formulate, dispense, and provide clinical information on drugs or medications to health professionals and patients. Professional gratification is pleasure, especially when gained from the satisfaction of a desire. Psychometric scale is a scale used for the measurement of psychological variables such as intelligence, aptitude, and personality traits.

Drug dispensers is pharmacist, druggist or pharmacy technician who is responsible to prepare, formulate, compound, and dispense drugs to clients with appropriate drug related information.

Before the data collection an official letter from department of pharmacy was written to the responsible body of the study areas (Jimma, Agaro, and Limmu Genet) town health offices. To get written consent, a brief explanation about the objective of the study was given to the study participants and their willingness was asked before administering the question. Those who refuse to participate in the study were excluded.

RESULTS: A total of 97 drug dispensers (63 druggists and 34 pharmacists) working in public and private health facilities of selected towns of Southwest Ethiopia were included in the study. Majority 72(74.2%) of the participants were males, and 25(25.8%) were females. Most 63(64.9%) of the participants were between age groups of 24-35 years. Of those drug dispensers involved in the study 63(64.9%) were druggist and 34(35.1%) were pharmacists. 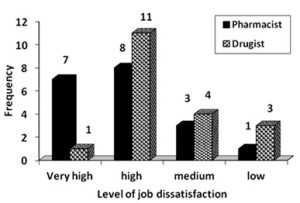 In this study, 59(60.8%) of the respondents were satisfied with their job. The major factors mentioned for satisfaction were: satisfaction in helping the needy 28(28.9%) and professional gratifications 23(23.7%) accounts the highest score (table 3). 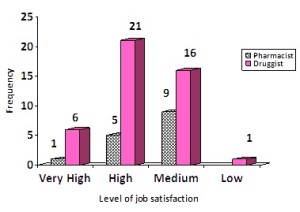 The major reasons mentioned for dissatisfaction among the 38 dispensers were: inadequate salary 24(24.75%), poor participation of team members 15(15.5%), lack of motivation of other members 12(12.4%), insufficient long term training 11(11.34%), poor infrastructures 10(10.31%) and poor interaction with team members 8(8.2%) were the major factors for drug dispensers job dissatisfaction (table 4).

DISCUSSIONS: Health organizations are highly dependent on their workforce. The growth and development of any organization depend on the availability of an appropriate human resource. Health professionals are a strategic capital in health service organizations; where the various clinical, managerial, technical and other personnel are the principal input making it possible for most health interventions to be performed.

However, problems related with Job satisfaction represents one of the most complex areas facing today’s health care managers when it comes to managing their employees 16. Although thousands of papers and research have been conducted on job satisfaction all over the world, in southwest Ethiopia in particular and in the federal democratic republic of Ethiopia at large this is one of the least studied research fields.

In this study a total of 97 drug dispensers working in public and private health facilities in the three towns of Jimma zone (Jimma, Agaro and Limmu Genet) were included. The result of this study showed that, 59(60.8%) of respondents claimed that they were satisfied with the job they were provided (figure 1). This finding is inconsistent with the study of Kebriaei and Moteghedi 18.

The probable reason might be people in medium income countries may expect more compared with people here in south west Ethiopia where they are better than the local residents and this might have led to the difference. The major reasons mentioned for satisfaction were: professional gratification and satisfaction in helping the needy accounts the highest score (table 3). In contrast to this, a study conducted in China showed that, the majority 473(76%) of young pharmacists were satisfied with salary they were earning11. The reason for differences in magnitude of satisfaction by salary may be due to that China has a better capacity to pay more salary than Ethiopia because China has more developed and high economic strength as compared to Ethiopia.

In contrary, 38(39.2%) of the participants were dissatisfied with their job (figure 2). The major reasons mentioned for dissatisfaction were inadequate salary and poor interaction with other health care team members. This result was consistent with a study conducted in East Ethiopia where low salary and poor infrastructure were identified as major factors for health workers job dissatisfaction and migration 19.

Due to poor working environment, about a third 30(31%) of study participants want to leave their current working place (Table 5). A study conducted in US showed that 15% of respondents want to leave their current employer and the remaining 85% of study population said that they intended to stay with their current employer 21.  The significant difference in the magnitude of the two study area was probably due to good salary, good interaction with co-workers, and good working environment in US than in Ethiopia.

In this study the majority of participants suggested that salary increment, implementation of the health care staff development policy, regular staff meeting to identify problems and find solution and good management can improve level of job satisfaction (Table 3). Similarly a study conducted in East Ethiopia revealed that good health system management and leader ship in particular, improving salary, and better carrier development, will improve satisfaction and reduce health professional migration19. The match in these reasons indicates that poor salary and poor management might be the major factors for dissatisfaction and consequently migration of health workers in Ethiopia.

CONCLUSIONS: More than half of therespondents claimed satisfied about their job which was explained by helping the needy and professional gratification. More than a third of the participants were dissatisfied mainly due to inadequate salary and lack of adequate interaction with other health care team member. Thus, policy makers and health service managers should act in order to improve the quality of health care services by encouraging health professionals retention, enhancing multidisciplinary health care team interaction and improving working environment with adequate and necessary resources.

ACKNOWLEDGEMENTS: The authors are grateful to the respondents who participated in the study and data collectors. We also acknowledge Jimma University for sponsoring the study.