ASSESSMENT OF MEMBRANE STABILIZATION, ANTIOXIDANT AND THROMBOLYTIC POTENTIAL OF LUTEIN- AN IN-VITRO STUDY

ASSESSMENT OF MEMBRANE STABILIZATION, ANTIOXIDANT AND THROMBOLYTIC POTENTIAL OF LUTEIN- AN IN-VITRO STUDY

ABSTRACT: Lutein; an orange-red colored powder, insoluble in water; is a member of the carotenoid family, a xanthophyll pigment. Lutein was evaluated for its antioxidant property when dissolved in different solvents. Solvents used in the study were chloroform, ethanol, methanol and dimethyl sulfoxide (DMSO). The antioxidant potential of lutein was evaluated by total antioxidant capacity, 2, 2’-diphenyl-1-picrylhydrazyl (DPPH), ferric anion reducing power assay (FRAP), 2,2’-azino-bis-3-ethylbenzthiazoline-6-sulfonic acid (ABTS) radical scavenging, hydroxyl radical scavenging, superoxide radical scavenging and hydrogen peroxide radical scavenging assays.  It was also assessed for its antihemolytic and thrombolytic potential.  Antioxidant property was compared to that of a standard (gallic acid). The antihemolytic property was assessed by the percentage inhibition of hemolysis in heat induced hemolytic assay and osmotic fragility test. The thrombolytic potential was evaluated by the percentage of clot dissolved by lutein in different solvents. Aspirin and trypsin were used as positive controls for antihemolytic and thrombolytic assays respectively. The results for total antioxidant capacity and FRAP were given in terms of gallic acid equivalents and the others were recorded as percentage radical scavenging activity of lutein. In comparison to gallic acid, the antioxidant property of lutein dissolved in various solvents was not very significant. It however showed antioxidant property in all the solvents and a moderate activity was seen when dissolved in chloroform and methanol compared to the other solvents. It was observed that lutein when dissolved in chloroform has shown to reduce heat induced hemolysis; though no significant difference was observed in hemolysis induced by hypotonic solution when compared to aspirin. The thrombolytic activity of lutein dissolved in ethanol was mild when compared to that of trypsin whereas lutein when dissolved in methanol and DMSO did not exhibit any thrombolytic property

Oxidative stress is defined as “a state in which oxidation exceeds the antioxidant system in the body secondary to a loss of the balance between them causing cell damage by an over abundance of oxidants like the ROS (Reactive Oxygen Species like for e.g. oxygen ions, free radicals and peroxide)”.

Lutein (β, ε- carotene- 3, 3’ –diol), a xanthophyll pigment is one of the many carotenoids found naturally occurring in plants such as green leafy vegetables (spinach, kale), corn, egg yolk and animal fats 1. Presence of this isomer of zeaxanthin in human tissues is of dietary origin. Cooking food containing lutein/zeaxanthin may increase the bioavailability by disrupting the cellular matrix and the carotenoid protein complexes 2. Lutein and zeaxanthin are the only carotenoids found both in macula and lens of the human eye (zeaxanthin predominating in the macula lutea, lutein is present elsewhere in the retina) and have dual function in both tissues to act as powerful antioxidants 3, 4 and filters high energy blue light 5, 6 to protect the eyes from oxidative stress caused by cigarette smoke and sunlight which can lead to age related macular degeneration and cataracts. Non-dietary factors affecting absorption of lutein and zeaxanthin include age, body composition, gender, malabsorption of fats, alcohol consumption, smoking and liver or kidney disease7-10.

The study was conducted to assess the antioxidant potential of lutein in different solvents and also to evaluate its antihemolytic and thrombolytic activity.

Lutein 90% was purchased from Haihang Industry, Jinan city, China; Gallic acid from Sigma Co.; all the other chemicals required for antioxidant studies were purchased from Himedia. Human blood was withdrawn for the antihemolytic and thrombolytic potential studies only after incurring the institutional ethical clearance [Ref: NU/CEC/BRNS (Pro.)-01/2014] and consent from the individual.

The invitro antioxidant potential of lutein was assessed by dissolving in various solvents like chloroform, ethanol, methanol and dimethyl sulfoxide (DMSO), using suitable methods. The solvents were selected since the solubility of lutein in these solvents is known11. The experiments were performed in triplicates.

The estimation of total antioxidants was done by the method of 12. The formation of blue- green phosphomolybdenum complex was measured at 695nm. The total antioxidant capacity was expressed in terms of gallic acid equivalents.

The method of 13 was followed with slight modification. In brief, the working solution was prepared by mixing the two stock solutions (7.4mM ABTS and 2.6mM Potassium persulfate). The working solution was further diluted with ethanol to which the sample dissolutions were added. Then the absorbance was taken at 734nm using the spectrophotometer. The result was expressed as percent of radical scavenging activity.

The method of 15 was used. The Ferric Reducing Antioxidant Power was determined using 2, 4, 6- tripyridyl–S-triazine (TPTZ) in a spectrophotometer at 595nm. The ferric ion reducing potential was expressed in terms of gallic acid equivalents.

The method of 16 was used. The superoxide radical generated by the photo-oxidation of methionine-riboflavin and their scavenging property was determined spectrophotometrically at 560nm using nitroblue tetrazolium (NBT) as the chromogenic substrate. The percentage of superoxide radical scavenged was calculated.

The method of 17 was followed. The hydrogen peroxide radical formed was measured spectrophotometrically at 240nm. The result was expressed as percentage of peroxide radical scavenging activity.

The method of 19 was followed. The red blood cell suspension was pre-incubated with lutein dissolved in different solvents for 20minutes at 55°C in the water bath. A control was maintained for each solvent. Then the absorbance of the suspension was measured at 540nm. Aspirin was used as positive control.

The thrombolytic potential was evaluated by the method of 20. Lutein was incubated with the pre-weighed clot for 90 minutes at 37°C. The clots were centrifuged, the supernatant was discarded and clot was weighed again. The percentage of clot dissolved was calculated. 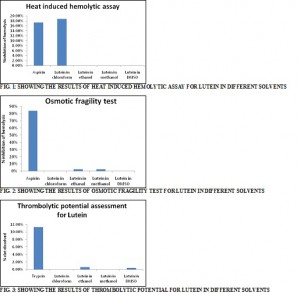 DISCUSSION: Reactive oxygen species (ROS) generated in tissues and cells have damaging effects on nucleic acids (mainly DNA), proteins, carbohydrates and lipids. The generation of ROS is initiated by several factors like chemicals, radiation, etc. The antioxidants that eliminate the pro-oxidants and scavenge free radicals controls the deleterious reactions and their effects. Carotenoids independent of their provitamin-A activity have reported biological effects as antioxidants. The present study showed that lutein (90% purity) has a effective antioxidant property; in that it scavenges the free radicals generated such as ABTS, DPPH, superoxide and hydroxyl radicals and it also exhibits total antioxidant potential and Ferric anion reducing potential when dissolved in different solvents like chloroform, ethanol, methanol and DMSO.

The solvents for the study were selected on the basis of the previous findings by 11. A cohort study by 21, 22; have shown individually that consumption of supplements with lutein and zeaxanthin together shows an elevated antioxidant status. A study by 23 has also shown in Electron Spin Resonance (ESR) and by chemical detection that lutein exhibits a greater efficiency than β-carotene in scavenging superoxide, hydroxyl radicals but not in quenching the singlet oxygen in which β-carotene exhibits a promising activity. In our study we found that lutein when dissolved in chloroform exhibited a potential antioxidant property. Ethanol and methanol dissolutions of lutein did not exhibit a promising activity, but lutein in DMSO showed a moderate activity for the assays performed.  Previous in vitro antioxidant studies on lutein by 24, has shown that for 50% scavenging of free radicals like superoxide, hydroxyl and DPPH, the concentration of lutein required was 21μg/ml, 1.75μg/ml and 35μg/ml respectively, whereas in the present study lutein was required at a much higher concentration to show similar effect.

Thrombolysis refers to the breakdown of blood clots by the tissue plasminogen activators which clear the fibrin cross-linking. These thrombolytic agents are normally protein in nature which mimics the action of tissue plasminogen activators. The ability of lutein to dissolve the blood clot was studied and no significant difference was seen from the treated and control group indicating a poor thrombolytic potential.

Hemolysis of the erythrocytes may be seen due to disruption of its membrane by numerous external factors like heat, tonicity and solute concentration. The anti-hemolytic studies reveal the ability of any substance to stabilize the membrane and reduce the extent of lysis of red blood cells. The osmotic lysis of red blood cells is seen due to entry of water into the cell. As membranes are composed of polyunsaturated fatty acids, elevated temperature increases fluidity of the membrane leading to rupture of the lipid bilayer. The target drug can prevent the entry of water into the cell and prevent the cell rupture or it can stabilize the fluidity of the membrane and prevent the lysis.  There are few references in the literature about anti-hemolytic potential of lutein.  The present study indicated a potent anti-hemolytic effect against heat induced hemolysis. The possible explanation for this observation is its chemical nature. As it is a complex lipid molecule, when mixed with the erythrocyte suspension, probably increased the fluidity of the membrane and a much higher temperature was required to disrupt the membrane integrity.

CONCLUSION: The major conclusion from this study is that lutein has remarkable membrane stabilizing property against heat induced lysis of the erythrocytes. The other conclusions are lutein has moderate antioxidant and a poor thrombolytic potential. Further this study can be extended to confirm the findings and derive the exact mechanism of its anti-hemolytic effect.

ACKNOWLEDGEMENT: The authors would like to thank Board of Research in Nuclear Sciences (BRNS), Department of Atomic Energy (DAE) for providing the necessary funding for the project (Sanction No.: 2013/34/3/BRNS). Also the authors thank all the research scholars and Central Research Laboratory, K S Hegde Medical Academy, Nitte University for their kind support.