ABSTRACT: The main objective of the present study includes the assessment of nutritional constituents and anti-oxidant activity of methanolic stem extract of Caralluma attenuata by in-vitro methods. In the present investigation the author has identified the phytochemical constituents which have nutritional importance by specific chemical tests, thin layer chromatography, atomic absorption spectroscopy for Calcium, Zinc and Magnesium. In vitro antioxidant property was also performed by Free Radical Scavenging Assay, Reductive Ability and Nitric Oxide Method. Carbohydrates, proteins and amino acids, flavonoids and inorganic essential trace elements were identified and the results were tabulated. On the basis of the results observed the methanolic stem extract of Caralluma attenuata found to possess considerable amounts of nutritional constituents and anti-oxidant property.

INTRODUCTION: Nutritional problems such as Vitamin deficiencies, anaemia, and malnutrition affect cognitive ability and intellectual development. Free radicals are highly reactive and harmful which may also lead to above specified problems. These are capable of damaging almost all types of bio molecules such as proteins, lipids, carbohydrates and nucleic acids. The fact is that the free radicals would be formed as a chain reaction. Oxidative stress can arise when cell cannot adequately destroy the excess free radicals formed 1, 2.

Plants are the primitive source for medicinal principles. Various kinds of herbs possess distinct and specific therapeutic uses. Among them Caralluma attenuate 3, 4 is a perennial herb belongs to the family Apocynaceae and sub-family is Asclepiadaceae. According to the literature the folkal information reveals that the tribes generally chew the whole plant to treat peptic ulcer, diabetes, in weight reduction 5, to suppress hunger and also to produce endurance.

It has been reported for the presence of steroids, flavanoids, saponins, triterpenes and pregnane glycosides etc., several biological activities like antidiabetic 6, antihyperlipidemic 7 and anti ulcerogenic activities was reported. The present study is aimed to identify nutritional chemical constituents and antioxidant potential 8 of methanolic stem extract of Caralluma attenuata.

Preparation of extract: The dried and powdered stem part of Caralluma attenuata was passed through a sieve no.22 and each kilo gram was extracted successively by cold maceration with 2.5 litres of aqueous methanol (50:50). The extract was concentrated to dryness under reduced pressure using rotary vacuum evaporator.

Experimental Procedure: The extract was subjected for the nutritional constituent’s investigations by chemical tests and TLC. The essential trace elements like calcium magnesium and zinc were quantified by AAS 9. The extract was also utilised to evaluate in vitro antioxidant activity by Free Radical Scavenging Assay 10, Reductive Ability and Nitric Oxide Method. The results obtained were tabulated.

Identification of flavanoids by using TLC: TLC technique became an important analytical tool for micro-analytical separation and determination of natural products. In the present study the methanolic stem   extracts of Caralluma attenuata was subjected to TLC.

In this analysis pre coated aluminium plates (10 cm length) coated with silica gel were used and different solvent systems were employed depending upon the nature of the analyte. For saturation of TLC chamber a sheet of filter paper was laid so as to cover internal part of three sides of the chamber which is soaked in the solvent system.

The chamber was left undisturbed to ensure saturation. A solution of stem extract of Caralluma attenuata plant was prepared in methanol. The spots of identical volume were applied 2cm away from the lower edge of plate with the help of microcapillary tube. The solvent was allowed to evaporate after each application by air drying. The spotted plate was then placed vertically in the chamber with the bottom edge immersed in developing medium. The solvent system was allowed to run approximately up to 8cm then the plates were taken out and solvent front was marked. The resolution of components of all extracts of plant of Caralluma attenuata was studied by locating the spots on the chromatogram. The spots were identified first by visual observation and then under UV lamp at 365 nm. Then the plates were developed in an Iodine chamber and the spots were located. 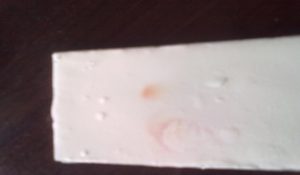 Sample blank: The blank is prepared in the same manner as for the sample preparation but without addition of sample. 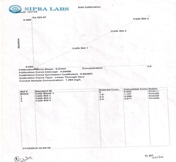 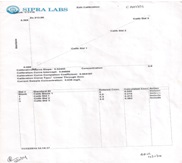 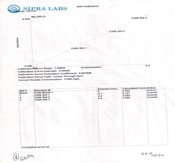 Reductive Ability: The reductive ability 13 of medicinal plants was determined according to the Oyaizu method. Methanolic stem extract (0.08-0.4 mg) of Caralluma attenuata was dissolved in 1ml of distilled water and then 2.5ml of phosphate buffer (0.2M, pH 6.6) and 2.5ml of potassium ferric cyanide [K3Fe(CN)6] (1%) were added. The mixture was added to the mixture, which was then centrifuged at 3000rpm for 10min. 2.5ml of upper layer of the solution was mixed with 2.5ml of distilled water and 0.5ml of FeCl3 (0.1%). Absorbance was measured at 700nm. Butylated hydroxyl toluene (BHT) was used as reference compound. All the analysis was performed in triplicate. The UV absorption spectrum was shown in Fig. 5 and 6. 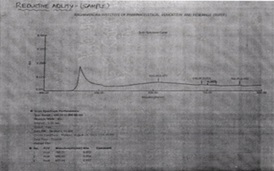 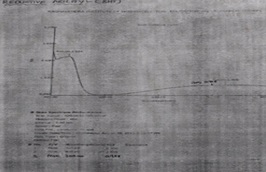 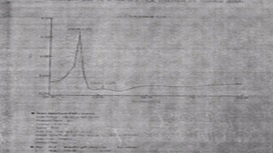 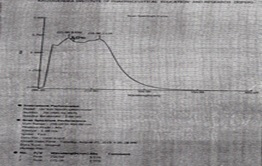 Nitric oxide scavenging assay: Nitric oxide was generated from Nitroprusside and measured by the Greiss reaction sodium nitroprusside in aqueous solution at physiological pH spontaneously generates nitric oxide which interacts with oxygen produce nitric ions that can be estimated by use of Greiss reagent. Scavengers of nitric oxide 15 compete with oxygen leading to reduced production of nitric oxide. Sodium nitroprusside (5 milli moles) in phosphate buffered saline (PBS) was mixed with 3.0ml of different concentrations of the drugs dissolved in the methanol and incubated at 25 °C for 150 min. The samples from the above were reacted with Greiss reagent (1% sulphanilamide, 2% H3PO4 and 0.1% napthylethylenediamine dihydrochloride). The absorbance of the chromophore formed during the diazotization of nitrite with sulphanilamide and subsequent coupling with napthylethylenediamine was read at 546 nm. The experiment was done in triplets.

Standard sodium nitrite (10mg/100ml) standard was processed in the same way and the inhibition percentage was calculated.

RESULTS AND DISCUSSION: The methanolic stem extract of Caralluma attenuata found to posses flavanoids its Rf value is 0.73 by using specific mobile phase which is nearer to the standard 0.72. Various nutrients like carbohydrates, proteins, Vitamins were identified by qualitative tests. Inorganic essential trace elements 16, 17 were notified by AAS and the percentage mg/g was identified as 0.324, 0.009, and 0.56 for calcium, zinc and magnesium respectively. The antioxidant 18, 19 capacity of the extract was performed by Reductive ability, FRSA and Nitric oxide scavenging assay methods and the results observed as 94.18%, 89.6%, and 92.4% respectively. From the results obtained indicates that the methanolic stem extract of Caralluma attenuata contains considerable amount of nutrients and essential trace elements. The methods which were used for evaluation of anti-oxidant activity had shown appreciable percentage of activity.

CONCLUSION: The methanolic stem extract of Caralluma attenuata as it contains essential nutrients, flavanoids and anti-oxidants; it is useful to reduce malnutrition, anaemia, calcium deficiency and to enhance immunity. It also prevents the process of biological oxidation, it is the unchecked problem associated with free radical formation - oxidative stress. Severe oxidative stress can cause cell death and moderate oxidation triggers apoptosis & necrosis and cardiovascular diseases. Several medicinal herbs have been known as good nutritive and remedy for prevention of disorders and ailments. The present study reveals that methanolic stem extract of Caralluma attenuata enhances endurance, enzyme production and hepatoprotection. So the present research can be extended further to develop a new herbal nutrient for prevention of various diseases by proceeding in-vivo tests.