ABSTRACT: The health and nutritional status of school children is an index of national investment in the development of its future manpower. Malnutrition affects the child’s physical and cognitive growth and increases the susceptibility to infections while having an adverse impact on economic growth of the country indirectly. The objective of this study is to assess the nutritional status of rural and urban school going children (16 - 18 years) of Bankura district, West Bengal. A total of 80 school children [rural school children (Group 1; n = 40) and urban school children (Group 2; n = 40)] belonging to the age group of 16 to 18 years and the study were conducted from the month of September 2015 to February 2016. The important clinical signs like pallor, hair changes, eye changes, teeth changes, skeletal changes, goitre, skin changes and bones etc., were found significantly higher for Group 1. Mean height, weight and body mass index were significantly higher in the Group 2 school children compared to Group 1. The prevalence of underweight was significantly higher in Group 1 School children compared to Group 2 according to their BMI, WC and WHR. The overall prevalence of underweight was 65%. The present study highlights that the rural school going children of Bankura district belonging to the lower socioeconomic classes and are suffering from different grades of malnutrition than their counterparts. These high levels of malnutrition in the present study underline the great need for nutritional intervention.

INTRODUCTION: Children and adolescent are considered to be the most important natural resources and biggest human investment for development in every community. The health and nutritional status of children is an index of national investment in the development of its future manpower. Nutritional status is an important index for measuring quality of life especially in children.

In this respect, understanding the nutritional status of children has far reaching implications on better development of future generations 1 as well as future development of humanity 2. Health problems due to poor nutritional status in primary school - age children are among the most common causes of low school enrolment, high absenteeism, early dropout and unsatisfactory classroom performance. Schools are considered as perfect settings for health promotion among children and school staffs 3 - 4. School age is a dynamic period of physical growth as well as of mental development of the child. The nutritional status of school - aged children impacts their health, cognition and subsequently their educational achievement.

Although the World Bank has included school health as one component of its essential public health package for cost effective health program. The nutritional and health status of school aged children in the developing world has received a little attention 5. WHO in 1997, developed 10 recommendations for school health, and initiated a global school health initiative in ten countries, of which 8 were developing countries 6. Despite such initiatives, school health has not been focused in India for many years and donor initiated school health projects have come and gone sporadically over the decades.

According to UNICEF data, 90% of developing world’s undernourished children lives in Asia and Africa while 40% of the world’s malnourished lives in India 7. The 2013 Global Hunger Index Report ranked India 16th, which represents the serious hunger situation. The National Family Health Survey (NFHS) data indicates that 43% of children fewer than 5 - years of age are underweight and 2% of them are overweight. Approximately 20% of the population in every country constitute school age children 5 - 15 years. About 200 million children belong to this group and majority of them reside in underprivileged areas in the rural India 8.

In India, we face a double jeopardy of malnutrition i.e., children from urban areas are affected with problems of over - nutrition while those from rural area suffer from effects of under - nutrition. The long term consequences of malnutrition none a child - turned - adult are issues of deep concern. Under-nutrition impairs the child’s immune system and weakens the defences against other diseases. Whereas over - nutrition contributes to childhood obesity and leads to the early onset of hypertension, Diabetes mellitus, coronary heart diseases, orthopaedic disorder and other respiratory diseases.

According to modern concepts, school health service is an economical and powerful means of raising community health and more important in future generations. By simply doing periodic medical examination and daily morning inspection of students, we can detect many more problems and treat accordingly. The health problems of student’s vary country to country. The most prevalent health problems are malnutrition, infectious disease, intestinal parasites, and diseases of skin, eye, ear and dental caries. The foundations of good health and sound mind are laid during the school age period 9.

MATERIALS AND METHODS: A school based observational cross sectional study was carried out in the Department of Physiology, Bankura Christian College, Bankura 10 - 11.

Inclusion Criteria: Children of 16 - 18 year were included in this study.

Exclusion Criteria: Children who were seriously ill, too agitated and unwilling for anthropometric measurements were excluded from the study.

The methodology comprised of interview and physical examination. Socio-economic status (SES) was determined by using Modified Prasad’s scale 12. The information was collected on pre - designed and pretested proforma.

Assessment of Malnutrition: Nutritional status of the children was assessed by anthropometric measurements. Anthropometric classification was used for the assessment of malnutrition (Table 1). Based on the age, body weight and height, a number of indices such as weight - for - age, height - for - age and BMI - for - age have been suggested 13. Under nutrition that is Wasting and stunting were defined according to Water low’s classification 12.

Data on children's growth status was obtained by measuring weight and height. Information on age of the child, socio - demographic characteristics, birth interval, history of infectious diseases and diet history was collected from the mother of the selected students using a structured questionnaire. The children are classified using three categories: 'underweight' (low weight - for - age), 'stunting' (low height - for - age) or 'thinning' (low BMI - for - age). Low anthropometric values are those more than 2 - SD away from the CDC 2000 (Centres for Disease Control and Prevention) standards 12 - 15.

Anthropological Parameters: Each subject following parameters were measured like height, weight, circumferences at waist and hip, and skin fold thickness at biceps, triceps, suprailiac and subscapular. Anthropometric measurements were taken by using standard protocols given by Weiner and Lourie. Stature was taken with the help of anthropometry in the standard arm hanging position body weight was measured by using spring balance with minimum clothing.

TABLE 1: CATEGORY OF MALNUTRITION ACCORDING TO BMI VALUE AS PER WHO CUT-OFFS

(Source: WHO 1999. Management of Severe Malnutrition: A Manual for Physicians and Other Senior Health Workers. Geneva: WHO).

Middle Upper Arm Circumference (MUAC): (MUAC) was measured in centimetre with a non-stretched measuring tape with the right arm hanging relaxed. MUAC is the circumference of the left upper arm, measured at the mid-point between the tip of the shoulder and the tip of the elbow (olecranon process and the acromium).

In children, MUAC is useful for the assessment of nutritional status 18 - 23. It is good at predicting mortality and in some studies, MUAC alone 24 - 26 or MUAC for age 10, predicted death in children better than any other anthropometric indicator. This advantage of MUAC was greatest when the period of follow-up was short 27 (Table 2).

Waist circumference (WC) was measured with a non-stretchable anthropometric tape (Mabis) at the mid-point between the last rib and the iliac crest, and we consider the average of both measures. The waist - to - height ratio (WHtR) was determined by dividing waist circumference (cm) by height (cm).

Measurement of Blood Pressure: Blood pressure was checked by auscultation, using a mercury sphygmomanometer (Mukherjee) with appropriate cuff or the arm circumference, after the student remained five minutes at rest and sitting. Reading was taken in sitting posture and on the right hand of the participants. Three readings of the BP of each subject were taken, maintaining an interval of 2 min between each reading. The mean of three readings will be reported, in accordance with the JNC 7 recommended standard.

Statistical Analysis: The data was analysed statistically by using appropriate statistical tools such as mean, standard deviation and percentage. Coefficient of correlation and was also performed and the level of significance was also tested.

Hair: 55% of rural children had normal hair. However, 45% had dull hair or hair without lustre. Whereas 96% students in urban has normal hair and remaining 4% were without lustre. So, there is a significant difference in hair condition, it may assume that it is due to the deficiency of nutritional.

Eyes: There is no significant differences are observed.

Gums: Gums were observed normal in 98% of the rural respondents and 100% among the urban respondents, while 2% of rural children had bleeding gums.

Teeth: 21% of the rural children had chalky teeth confirming the deficiency of Calcium, 11% had discoloured teeth which could be a result of poor dental care.

Bones: Bones were found normal in both rural and urban children. None of the children had Rickets or any other visible orthopedic problem.

The study group consisted of 80 children, out of which equal number of male and female students from both rural and urban area with a mean age of 14.4 ± 0.91 years for urban school children and for rural school was 14.87 ± 1.11years were included in this study. Table 4 and Fig. 1 summarises the comparison of participants’ general anthropometric information in terms of age, height and weight, body mass index and body surface area and also determine the number of obese subject according to the WHO guideline. The mean BMI was significantly lower (p < 0.001). 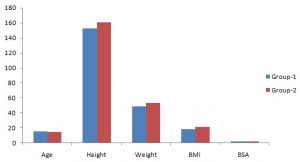 TABLE 7: COMPARISON OF PERCENTAGE OF NUTRITIONAL STATUS ACCORDING TO THEIR BMI, WC AND WHR 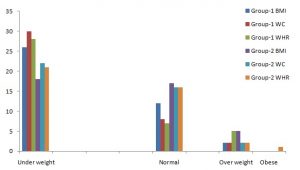 FIG. 3: GRAPHICAL REPRESENTATION OF NUTRITIONAL STATUS ACCORDING TO THEIR BMI, WC AND WHR

DISCUSSION: The socio economic characteristics of the rural children revealed that the majority (60.2%) of the head of the household were farmer and civil servants and remaining of them earn less than Rs 1,20,000/- year. Such a relatively low income will most likely affect the nutritional status of subjects in such homes considering the cost of living in the Bankura. The income of the household head therefore, appears to be a major factor in determining the nutritional status of mothers and children in the household. The high levels of malnutrition in the present study underline the great need for nutritional intervention.

A healthy child becomes a healthy adult. Of the various factors which determine the health of the child, nutrition plays the most vital role. Low body weight is unhealthy and harmful in the way it has dire consequences on both physical and psychological well - being of a child. Decreased level of thinking, impaired concentration, irritable mood and heightened obsessiveness, while contributing to the psychological effects of malnutrition, undermines the academic performance of a child and leads to the development of a socially withdrawn child.

CONCLUSION: Our study highlights that children from rural areas and belonging to lower socio - economic classes are more nutritionally deprived than their counterparts. This difference highlights the necessity of a differential approach in combating malnutrition. The present study also shows reveals that the rural school going children of Bankura district are suffering from different grades of malnutrition. The clinical sign (General appearance) observations also supported the result of anthropometric status of children. It was revealed that the majority of rural school children suffer from under - nutrition compared to the urban school children according to their BMI score, waist circumference and waist - hip ratio.

ACKNOWLEDGEMENT: The authors would like to acknowledge the technical support provided by the members of Physiology department and also the school children of different schools and their teachers.

CONFLICT OF INTERESTS: The authors declare that they have no conflict of interests.