ABSTRACT: Ramganga river water is an important source of irrigation in major parts of the Moradabad and Bareilly region. The current study focuses on the assessment of the water quality of this river. River water samples were collected from five different sites of Moradabad and Bareilly stretch during the summer and winter season of the year 2018. Two sampling sites, namely MDA colony (S1) and Nawapuranalla (S2) were at Moradabad while the remaining three sites viz. UchaGaon (S3), Ramganga bridge (S4), and Chaubari village (S5) were at the Bareilly region. In summers, pH at S1 was highest while Total Solid (TS), Total suspended solids (TSS), biological oxygen demand (BOD) and chemical oxygen demand (COD) of river water observed highest at S2. However, in winters, dissolved oxygen (DO) at S1 observed highest while Total dissolved solids (TDS), Nitrate and Phosphate were highest at S2. The mean values of these parameters were compared with WHO and BIS standards and found that all parameters were within the permissible limit except BOD, COD, and Phosphate. While a strong correlation was also observed between TS/TSS (0.998), TS/BOD (0.958), TS/Phosphate (0.892) and TSS/BOD (0.949). The results indicated that the mean of most physicochemical parameters were within the permissible limit of WHO and BIS standards while some parameters (TS, TSS, BOD, Nitrates, and Phosphates) at site S2 in Moradabad were found to be higher in both seasons comparing to the WHO/BIS standards, thus, requires regular monitoring and implementation of remedial measures.

INTRODUCTION: Rapid industrialization, urbanization, and other developmental activities pollute rivers, which are important in the nation's development and sustenance of life 1, 2. While nowadays, environmental pollution and its impact on health present and future generations are of main concern.

In India, the river, reservoir, dam, etc. were the main source of water for agricultural purposes 3. Whereas Ramganga is an important river in Uttar Pradesh, which originates from the hills of Garhwal and traverses through Kalagarh, Moradabad, and Bareilly and finally merges into River Ganga at Farukhabad, covering a distance of about 480 km.

Recently, the side effect of rapid industrialization and subsequent urbanization are of great concern and has been universally expressed regarding environmental pollution 4. Our culture is completely river oriented, and most of our important towns and urban areas are located on the bank of major rivers.

The river water is being polluted by untreated domestic waste way into the rivers through sewage, outfalls drain, etc. 5 and increase the water pollution in rivers 2.

The interactions of both the physical and chemical properties of water play a significant role in composition, distribution, and abundance of aquatic organisms 6, 7. The degree of pollution is generally assessed by studying the physical and chemical characteristics of the water bodies 8, 9. Studies related to water pollution of the river like Ganga 10, Godavari 11, Chambal 12, and Yamuna 13, have received greater attention during recent years. An attempt has therefore been made to study the magnitudes of pollution and to assess the water quality by monitoring the changes in Physico-chemical parameters of river Ramganga in the Moradabad and Bareilly region.

MATERIALS AND METHODS: Water samples from the Ramganga river were collected for physicochemical analysis from five different sites of Moradabad and Bareilly stretch during the summer and winter season of the year 2018. Two sampling sites, namely MDA colony (S1) and Nawapuranalla (S2) were at Moradabad while the remaining three sites viz. Ucha Gaon (S3), Ramganga bridge (S4), and chaubari village (S5) were at the Bareilly region. As per the norms of the APHA 14, wide-mouthed plastic bottles of one-liter size were used for collecting the samples and preserved until the parameters were analyzed in the laboratory. Water samples were analyzed as per the norms of APHA 14 for following physicochemical and biological parameters viz. pH, Total solids (TS), total dissolved solids (TDS), total suspended solids (TSS), Dissolved Oxygen (DO) by Winkler method, Biological Oxygen Demand (BOD) (5 days incubation method), Chemical Oxygen Demand (COD) (by dichromate titration method), Nitrate and Phosphate. Samples for Dissolved Oxygen (DO) and Biochemical Oxygen Demand (BOD) were collected separately in BOD (glass) bottles.

RESULTS AND DISCUSSION: Most observations and physicochemical analyses of Ramganga river water clearly show that water quality of river at S2 (Nawapuranalla) at Moradabad was relatively highly polluted because of the incursion of sewage, industrial effluent, commercial and domestic waste as compared to the other remaining sites. Assessment of physico-chemical characteristics at the different sampling sites in summer and winter season is appended in Fig. 1-9, while Table 1 represents the standards of different parameters given by WHO and BIS.

pH is considered an important chemical parameter that determines the suitability of water for various purposes. The optimal pH ranges from 6.5–8.2 is to sustain aquatic life, and it is an important indicator of the water quality and the extent of pollution in the watershed areas 15, 16. The observed pH values for summer and winter season were shown in Fig. 1. pH value of water ranges from 7.5 to 8.6 in summer while it was ranged from 6.2 to 7.7 in winters, which shows the water is slightly alkaline in nature.

However, overall higher pH was recorded in the summer seasons than in the winter seasons. The higher value of pH in the summer season may be due to the influx of sewage, effluents disposal, and low water level. The variation could be attributed to the exposure of river water to the atmosphere, biological activities, and temperature changes 8, 17. It was observed that the pollutant water directly influenced the pH of the river. 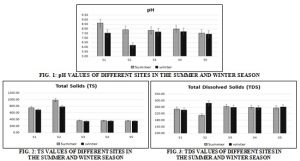 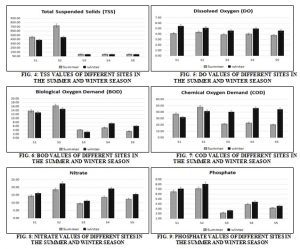 Dissolved Oxygen indicates the physical and biological processes occurring in water and an important factor to determine whether the biological changes are brought about by aerobic or anaerobic organisms 4. The oxygen present in water can be dissolved from the air or produced by photosynthetic organisms 19. Oxygen is generally decreased in the water due to respiration of biota, decomposition of organic matter, rise in temperature, oxygen demanding wastes and inorganic reductant such as hydrogen sulphide, ammonia, nitrites, ferrous iron, etc. 10 In this study, DO vary from 3.77 to 4.36 mg/l in summer and 4.60 to 5.47 mg/l in winter. These values indicate relatively mild organic pollution. Low values of DO in summer could be due to the low level of water and discharge of organic waste and anthropogenic waste.

Biological oxygen demand (BOD) is defined as the amount of oxygen required by micro-organisms in stabilizing the biodegradable organic matter under aerobic condition 20. The BOD observation was recorded 3.50 to 16.43 mg/l in summer and 3.03 to 14.71 mg/l in winter these variations are due to the addition of the amount of organic matter. High BOD and COD values at the upstream sites were due to the direct discharge of untreated domestic waste into the river and led to high organic pollution, which was gradually reduced at the downstream sites 21.

Whereas, Chemical oxygen demand (COD) is the amount of oxygen consumed during the chemical oxidation of organic matter. Chemical oxygen demand (COD) gives us an unfailing parameter for judging the amount of pollution in water 22. The COD observations were recorded 20.53 to 47.83 mg/l in summer and 31.90 to 46.03 mg/l in winter. The higher values of BOD and COD at S2 of Moradabad region could be due to the effluents released from a number of industries and sewage treatment plant into the river 23.

Depletion of oxygen in freshwater bodies could be a result of Nitrate reactions. Municipal and industrial wastewater, septic tanks, feedlot discharges, animal wastes (including birds and fish) and discharges from car exhausts are the major sources of nitrogen into the water bodies. In the present study, the nitrates values were ranged between 9.52 to 18.54 mg/l and 11.20 to 22.53 mg/l in summer and winter, respectively. Higher nitrates values are found at S2 in both seasons due to continuous discharge of commercial and domestic sewage. In water bodies, the growth of algae and other photosynthetic aquatic life were encouraged by nutrients such as nitrogen and phosphates compounds 24. The phosphorus content was also recorded between 2.20 to 7.13 mg/l and 2.67 to 8.07 mg/l with the maximum at S2 in both summer and winter season, respectively. In respect to WHO standard, overall higher values of phosphate in both seasons could be due to the use of detergent which may increase the phosphate concentration to a great extent. The anthropogenic activities (use of detergents, domestic sewage, agricultural runoff etc.) may increase the phosphate concentration to a greater extent and have a considerable effect on the quality of the water. A higher amount of phosphate cause eutrophication and represent high pollution loads of the aquatic body 25.

CONCLUSION: Declining water quality is one of the major concerns globally. Both natural and anthropogenic activities are responsible for declining water quality. A large number of factors directly or indirectly influence the water quality of the river Ramganga. Based on various parameters studied it was concluded that the water quality of River Ramganga is not good. The mean values of these parameters were compared with WHO and BIS standards and found that all parameters were within the permissible limit except BOD, COD, and Phosphate. Higher COD values than BOD indicates the industrial discharge into the river water at the studied sites. The results indicated that TS, TSS, BOD, Nitrate, and Phosphate were higher at S2comparing to other sites in both seasons, pointing towards the bad water quality at Moradabad. Thus, it requires regular monitoring and implementation of remedial measures before using for domestic and agricultural purposes.

ACKNOWLEDGEMENT: The authors are grateful to the Department of Environmental Science, Bareilly College, Bareilly, U.P. India, for providing the laboratory facilities for the above study.