ABSTRACT: The present investigation revealed the phytochemical constituent, antioxidant potential and correlation between antioxidant activities with total phenol and flavonoid contents of fruit extracts of Pyrus pyrifolia and Prunus domestica from local Himalayan region of Himachal Pradesh, India. The total phenolic content was estimated by using Folin-Ciocalteu reagent method, whereas, flavonoid content was quantified using aluminium chloride method. The antioxidant activity was evaluated by using DPPH, FRAP and Nitric oxide (NO) scavenging assay. The total phenolic content was found to be 159.86±2.91 and 145.56±2.43 µg/ml gallic acid equivalents. Similarly, flavonoid content was 48.69±1.90 and 284.27±2.16 µg/ml rutin equivalents for P. pyrifolia and P. domestica, respectively. The antioxidant activity values of DPPH scavenging for fruit extract were found to be (IC50-17.37 and 9.47 µl/ml), FRAP activity values were (IC50- 15.51 and 6.13 µM Fe (II) equivalents) and Nitric oxide scavenging values were (IC50- 21.49 and 30.11 µl/ml) for P. pyrifolia and P. domestica respectively. The investigation revealed significant correlation between total phenolic and flavonoid contents with antioxidant activities of fruit extracts. This was the first report which provides insight towards development of value added products.

INTRODUCTION: Epidemiological studies have revealed that consumption of fruit, vegetables, and their byproducts have health benefits against chronic diseases including cardiovascular disease and certain types of cancer 1. The local fruits of Himachal Pradesh can serve as an ideal source of dietary antioxidants. Due to seasonal constraints and low cost, these fruits are always within the reach of the normal populace.

Consumption of antioxidant rich fruits help to play a protective role against a number of seasonal diseases as well as improve general well-being. Currently, much attention is being focused on the consumption of fruits because of their valuable constituents which contribute towards prevention of degenerative diseases caused by oxidative stress 2, 3. Fruits contain a wide array of dietary phytonutrients such as flavonoids, phenolic acids, carotenoids and vitamins with strong antioxidant capacities 4.

In the majority of fruit cultivars of the Rosaceae family, especially in the genera of Malus, Pyrus and Prunus species are reported to contain considerable amount of valuable natural antioxidants compounds such as phenolics, flavonoids, carotenoids and anthocyanin that impart health-promoting effects to the consumers 5, 6. It has been proven that plum fruits have several times higher total antioxidant capacity than apples, the latter being one of the most commonly consumed fruits in our diet 7. Plum fruits demonstrated very good scavenger activity against oxygen-derived free radicals, such as hydroxyl and peroxyl radicals 8. Pear fruits are good source of pectin, help in maintaining desirable acid balance in the body helpful in heart diseases, gastro intestinal tract disorders and recommended to patients suffering from diabetes because of low sucrose content; and included in low antigen content diets to alleviate the symptoms in the management of immune mediated diseases 9.

Still even though the consumption of pear juices was less than that of citrus and apple juices. Citrus and apple juice are in fashion due to their abundant nutrition especially with rich Vitamin C, good color and flavor 10, 11. But many researchers have indicated that the nutritional component of pear juice is as rich as those in citrus and apple juice 12. And we tried to enhance the color and flavor of pear juice products and processing technology according to consumers demand and reported that the nutrition of pear juice may be the next hotspot that will drive the global pear juice industry. The overall nutritional and functional food value of fruits can be better understood by assessing their antioxidants and bio-actives profile which in turn may depend on the type of fruits and their cultivation conditions 13. Based on numerous evidences on the strong biological activity of phytonutrients and on the scarcity of data for their content in foods, the aim of current study was focused on to evaluate the phenolic content, flavonoid content and antioxidant activity of the underutilized Himalayan pear and plum in order to understand the health benefits of these fruits.

Plant materials and extraction procedure: The fresh fruits of Pyrus pyrifolia and Prunus domestica were collected from Himalayan region (Altitude 1580m above mean sea level) Himachal Pradesh, India. Pear and Plum peels were cut off with a sharp knife to ensure minimum loss of pulp. Seeds from both fruit samples were disposed. The fruit extracts were prepared by adding equal weight of fruit pulp in 100 ml of water followed by mixing in thoroughly in a kitchen grade blender. For each fruit samples 100 ml of fiber free liquid extract was collected by passing the blended mixture through a muslin sieve. Photochemical analyses were done immediately with 50 ml of fiber free fruit extracts and rest of it was stored at 4 oC for further study.

Determination of total flavonoid Content: The total flavonoids content in studied samples was determined by using aluminium chloride (AlCl3) method 15. The flavonoid content was calculated from standard curve of rutin (20-100 µg/ml) and expressed as rutin equivalents (RE) per ml of sample.

Ferric Reducing Antioxidant Power (FRAP) assay: The ability to reduce ferric ions was dignified using the method 17. Ascorbic acid was used as positive reference standard. The antioxidant capacity based on the ability to reduce ferric ions of samples was calculated from the linear calibration curve of FeSO4 (2.5-20µM) and expressed as µmol FeSO4 equivalents per ml of sample.

Statistical analysis: Each sample was analyzed individually in duplication and the results are expressed as the mean value (n = 3) ± standard deviation. Antioxidants assay were analyzed by using two way ANNOVA in Graphpad Prism 5 software. The correlation coefficients between studied parameters were demonstrated by linear regression analysis. 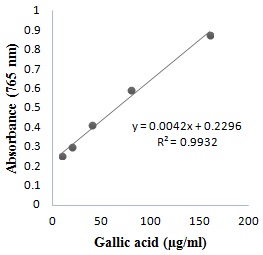 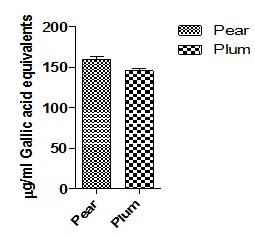 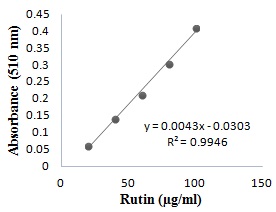 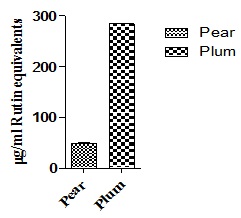 In-vitro antioxidant activity: There are different methods to evaluate antioxidant characteristics of plants but none of them alone cannot be used for evaluating antioxidant property of extracts. Therefore, it is necessary to characterize the extract by different antioxidant mechanism 19, 20.

Scavenging activity on 2, 2-diphenyl-1-picrylhidrazyl (DPPH) radical: Activity on scavenging DPPH radical is a well-established and relatively quick method. Stable DPPH free radical shows strong absorbance at 517 nm which is effectively scavenged by antioxidants. DPPH radical accepts an electron or hydrogen radical from antioxidants present in the samples to be analyzed and become a stable diamagnetic molecule which can be visualized as a noticeable discoloration from purple to yellow 21.

The percentage scavenging activity of the analyzed fruit extracts were determined using different concentrations (2.5-20 μl/ml) which have been taken to compare with the standard ascorbic acid. The DPPH radical scavenging capacity in this study has been reported after 30 minutes of incubation for all samples analyzed. P. domestica methanolic extract is the only sample which showed observable antioxidant activity in all different concentrations analyzed. Extent of DPPH radical scavenged was determined by increase in intensity of violet color in the form of IC50 values, defined as the concentration of antioxidant required for 50% scavenging of DPPH radicals in specified time period. IC50 of the both methanolic extracts along with standard ascorbic acid has been shown in Fig 3. IC50 value of P. domestica extract (9.47µl/ml) is lower than that of P. pyrifolia (17.37 µl/ml), whereas ascorbic acid has IC50-14.52 µl/ml. 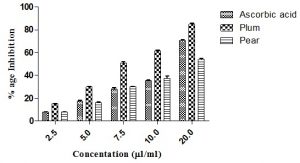 Ferric Reducing Antioxidant Power (FRAP) assay: Frap assay measures the reducing potential of an antioxidant reacting with a ferric tripyridyltriazine [Fe3+- TPTZ] complex and producing a colored ferrous tripyridyltriazine [Fe2+-TPTZ] 17. Generally, the reducing properties are associated with the presence of compounds which exert their action by breaking the free radical chain by donating a hydrogen atom. Hence the FRAP assay provides a direct estimation of the level of antioxidants or reductants present in a sample. The fruit extracts of P. pyrifolia and P. domestica showed increased ferric reducing power with the increased concentration as compared to ascorbic acid (Fig. 4). The IC50 values were found to be 6.13 µl/ml, 15.51 µl/ml and 24.60 µl/ml Fe (II) equivalents for ascorbic acid, P. domestica and P. pyrifolia extract respectively. 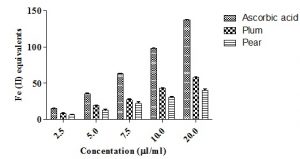 Nitric oxide scavenging assay: Nitric oxide radical is well known as it has an important role in various types of inflammatory processes. The production of nitric oxide radical at a sustained levels result in direct tissue toxicity and contribute to the vascular collapse associated with septic shock, whereas chronic expression of nitric oxide radical is associated with various carcinomas and inflammatory conditions including juvenile diabetes, multiple sclerosis, arthritis and ulcerative colitis 22. The nitric oxide generated from sodium nitroprusside reacts with oxygen to form nitrite. Fruit extract also moderately inhibits nitrite formation by directly competes with oxygen to react with nitric oxide. The scavenging of NO by the fruit extract was increased in concentration dependent manner. The fruit extract of P. domestica showed maximum activity of 61.48% at 25 µl/ml as compared to that of P. pyrifolia and ascorbic acid at the same concentration exhibited 57.72% and 40.61% inhibition respectively (Fig. 5). IC50 values were found to be 30.11 µl/ml, 21.49 µl/ml and 23.80 µl/ml for ascorbic acid, P. domestica and P. pyrifolia fruit extracts respectively. 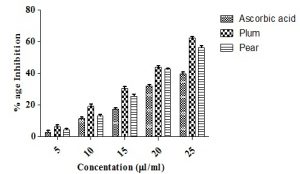 The present study has contributed to considerate the holistic and the impending applications of Pyrus pyrifolia and Prunus domestica as a source of phytonutrients and antioxidants based on both TPC and TFC values along with their free radical scavenging activities and IC50 values. The results attained from various assays exhibited high antioxidant activity of the fruit extracts even at lower concentrations, which in accordance with good correlation to total phenolics and flavonoids content. Therefore, the prominence of the phytochemical constituents and antioxidant activities of these fruits in the maintenance of health is strengthened as trend of the imminent and can offer tremendous opportunities to develop functional foods and nutraceuticals.

ACKNOWLEDGEMENTS: The authors acknowledge the infrastructure and financial support provided by the Shoolini University.

CONFLICT OF INTEREST: The authors declare no competing financial interest.