ABSTRACTThe objective of the present study was to investigate the antioxidant and analgesic activity of ethanol extract of Xanthium indicum Koen. Family: Compositae. Ethanol extract of X. indicum plant was prepared and tested for its phytochemical and pharmacological investigation. Preliminary phytochemical investigation showed that extracts possessed the active principles-alkaloid, carbohydrate, glycoside, flavonoid & tannin. The ethanol extract of X. indicum showed significant antioxidant property in the qualitative assay. The extract showed the antioxidant property by the presence of strong yellow spot on a purple background on the TLC plate & it also in the quantitative assay, X. indicum extract displayed free radical scavenging activity in the DPPH assay (IC50 ~141.25 µg/mL) which is comparable to standard (ascorbic acid, IC50 ~14.12 µg/mL). The extract showed dose-dependent reduction ability (Fe3+ to Fe2+ transformation) in reducing power assay; showing a maximum absorbance of 0.492 at a concentration of 100 μg/mL of the ethanol extract comparable to that of ascorbic acid which were used as positive control and gave maximum absorbance of 0.659 at a concentration of 100 μg/mL. The extract inhibited the acetic acid induced writhing in mice (47.5% P<0.001 and 24.55% P<0.05) at the dose of 500 and 250 mg/kg body weight respectively and it is comparable to the activity of the standard analgesic drug Diclofenac sodium (67.96% P<0.001) at the dose of 25 mg/kg body weight. In summary, the ethanol extract of X. indicum possesses antioxidant constituent(s) & the ethanol extract has had beneficial effects as a pain reliever

It grows as a gregarious weed in fallow paddy fields and by the canal or ditch banks in all areas of Bangladesh. The plant is reported to have diaphoretic, diuretic, sudorific, CNS depressant and styptic properties. Decoction of the plant is used in urinary and renal complaints, gleet, leucorrhoea and menorrhagia. Seeds are used to resolve inflammatory swellings while the root being useful against scrofulous tumours and cancer.

The root extract of the plant is reported to be employed in cancer and scrofula, the fruits are rich in vitamin B and are utilized as demulcent and said to be effective in treating small pox, herpes and bladder affections The plant is reported to contain alpha and gamma tocopherols, polyphenols, glucoside, xanthostrumarin and xanthonolides as the principal constituents 1.

Medicinal plants are still valuable source of safe, less toxic, lower price, available and reliable natural resources of drugs all over the world. Plants have been used as remedies and still they play an important role in health care for about 80% of the world's population from the beginning of civilization. The therapeutic basis of herbal medication has formed by the presence of diverse bioactive compounds like steroids, terpenoids, flavonoids, alkaloids, glycosides etc. in plants. Also for the treatment of diseases which are still incurable, medicinal plants can serve as a source of novel therapeutic agent.

Considering the importance of this area and as a part of our ongoing investigation on local medicinal plants of Bangladesh 2, in this paper, we reported a study of the antioxidant and analgesic activity of the leaves of X. indicum.

Sample collection and identification: For this present investigation, X. indicum was collected from Khulna University, Bangladesh in janury 2011 and was identified by Bangladesh National Herbarium, Mirpur, Dhaka (Accession number DACB-35522).

Preparation of Extract: The collected plants were separated from undesirable plant parts, washed with water and shade-dried for 3 weeks. After grinding of plant parts by suitable grinder the powder was stored in an airtight container and kept in a cool, dark and dry place until analysis commenced. About 150gm of powered was taken in a clean, flat-bottomed glass container and soaked in 500 ml of 96% ethanol for 7 days accompanying occasional shaking and stirring. The mixture was then filtrated by a piece of clean, white cotton and finally by filter paper. 7 gm (yield 5.83%) of gummy concentrate of greenish black color crude ethanol extracts of X. indicum was obtained by evaporation of filtrate by rotary evaporator.

Animals: Mice of random sex (Swiss-webstar strain, 19-40 gm body weight) collected from animal resources branch of the International Center for Diarrhoeal Disease Research, Bangladesh (ICDDR, B) were used for the experiments. The animals were kept at animal house (Pharmacy Discipline, Khulna University, Khulna) for adaptation after collection under standard laboratory conditions (relative humidity 55-65%, room temperature 25±2oC and 12 hour light: dark cycle) and fed with standard diets (ICDDR, B formulated) and had free access to tap water. According to the animal ethics provided by ICDDR, Bangladesh.

Determination of Analgesic Activity: The acetic acid induced writhing method 4-6 was adopted with minor modification. The experimental animals were randomly divided into four groups, each consisting of five animals. Group I was treated as 'control group' which received 1% (v/v) Tween-80 in water at the dose of 10 mL/kg of body weight; group II was treated as 'positive control' and was given the standard drug diclofenac sodium at the dose of 25 mg/kg of body weight; group III and group IV were test groups and were treated with the extract of X. indicumat the doses of 250 and 500 mg/kg of body weight respectively. Control vehicle, standard drug and extracts were administered orally, 30 minutes prior to the intraperitoneal injection of 0.7% acetic acid; after an interval of 15 minutes, the number of writhes was counted for 5 minutes. The number of writhings in the control was taken as 100% and percent inhibition was calculated as follow:

Qualitative assay: A suitably diluted stock solutions were spotted on pre-coated silica gel TLC plates and the plates were developed in solvent systems of different polarities (polar, medium polar and non-polar) to resolve polar and non-polar components of the extract. The plates were dried at room temperature and were sprayed with 0.02% 1, 1-diphenyl-2-picryl hydrazyl (DPPH) in ethanol. Bleaching of DPPH by the resolved bands was observed for 10 minutes and the color changes (yellow on purple background) were noted 7. DPPH forms deep pink color when it is dissolved in ethanol. When it is sprayed on the chromatogram of the extract, it forms pale yellow or yellow color which indicates the presence of antioxidants.

Quantitative assay: The antioxidant potential of the ethanol extract was determined on the basis of their scavenging activity of the stable 2, 2-diphenyl-1-picryl hydrazyl (DPPH) free radical. DPPH is a stable free radical containing an odd electron in its structure and usually utilized for detection of the radical scavenging activity in chemical analysis. The aliquots of the different concentrations (1-500 μg/mL) of the extract were added to 3 mL of a 0.004% w/v solution of DPPH. Absorbance at 517 nm was determined after 30 min, and IC50 (Inhibitory conc. 50%) was determined. IC50 value denotes the concentration of sample required to scavenge 50% of the DPPH free radicals 8.

The formula used for % inhibition ratio is;

Increased levels of PGE2 and PGF2α in the peritoneal fluid have been reported to be responsible for pain sensation caused by intraperitoneal administration of acetic acid 11.

In acetic acid induced writhing test, the ethanol extract of X. indicum significantly and dose dependently suppressed the frequency of acetic acid induced writhing in mice. It showed 47.5 (P<0.001) and 24.55% (P<0.05) writhing inhibition at the dose of 500 and 250 mg/kg body weight respectively, while the standard drug diclofenac-Na showed 67.55% writhing inhibition (Table 2). These results showed that the analgesic effect of X. indicumwas significant at 500 mg/kg body weight. Several flavonoids isolated from medicinal plants have been discovered to possess significant anti-nociceptive and/or anti-inflammatory effects 12.

Systemic (i.p. or p.o.) administration of the flavonoid myricitrin, at doses that did not produce any important motor dysfunction, alterations in basal temperature, or any other obvious side effects induced a dose-dependent inhibition of acetic acid-induced visceral nociceptive response in mice 13.

It is therefore, possible that the anti-nociceptive effects observed with this extract may be attributable to its flavonoid component, shown to be present during phytochemical analysis. On the basis of the result of acetic acid induced writhing test, it can be concluded that the dried ethanol extract of whole plant of X. indicum possess analgesic activity and the  mechanism to suppress the nociception is probably the opening of voltage and small conductance calcium-gated K+ channels and the reduction of calcium influx.

The DPPH radical contains an odd electron which is responsible for visible purple color. When DPPH accepts an electron donated by an antioxidant compound, the DPPH is decolorized & observed as light yellow spot. X. indicum extract may contain some anti-oxidative compounds which give an electron & produce light yellow color.

Therefore quantitative determination is necessary to find out the extent of antioxidant activity. 0.2 % DPPH solution in ethanol is sprayed onto a TLC plate, the compounds having antioxidant properties are seen as yellow zones on a purple background 14. After applying DPPH on the TLC plate, yellow color on purple background was observed which indicated the presence of antioxidant components in the ethanol extract of X. indicum.

The flavonoids from plant extracts have been found to possess antioxidants, antimicrobial and anti-inflammatory properties in various studies 16-17. Several plant components like tannins are responsible for showing antioxidant property 18.

As in the phytochemical test, X. indicum showed the presence of flavonoids and tannins, its antioxidant and anti-inflammatory properties may be observed due to the presence of these chemical components.

The DPPH antioxidant assay is based on the ability of 1, 1-diphenyl-2 picrylhydrazyl (DPPH), a stable free radical, to decolorize in the presence of antioxidants 19.

The reducing capacity of a compound may serve as a significant indicator of its potential antioxidant activity. The reducing properties are generally associated with the presence of reductones. The antioxidant action of reductones is based on the breaking of the free radical chain by donating a hydrogen atom. The reduction of ferrous ion (Fe3+) to ferric ion (Fe2+) is measured by the intensity of the resultant blue-green solution which absorbs at 700 nm. When substances exhibiting high reducing tendencies donate electrons which can react with free radicals converting them to more stable products in the process, radical chain reactions could be terminated.

The data obtained from the experiment for determining the reducing power of plant extract in which increasing absorbance values implied increased conversion of Fe3+ to Fe2+, hence increasing reducing ability of plant extract, showed that the extract exhibited concentration–dependent ferric reducing ability within the range of plant extract concentrations used for the experiment. This agrees with the report from other works done in this direction 21. The antioxidants contained in the extracts may be partly responsible for the underlying mechanism.

TABLE 5: ABSORBANCE OF EXTRACT OF X. INDICUM AND ASCORBIC ACID ON DIFFERENT CONCENTRATION 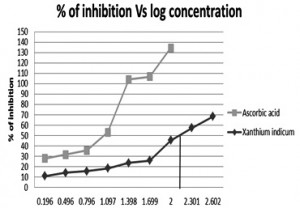 CONCLUSION: The experimental findings from the study showed that the ethanol extract of X. indicum possesses organic compounds like- carbohydrate, alkaloid, glycoside, flavonoid & tannin which can show extensively pharmacologic & other activities. The extract showed the free radical scavenging properties indicated by the presence of strong yellow spot on a purple background on the TLC plate. In the quantitative assay, the extract displayed free radical scavenging activity in the DPPH assay which is comparable to that of ascorbic acid a well-known standard antioxidant.

Based on this, it can be concluded that the ethanol extract of X. indicum possess analgesic activity and the mode of action might involve a peripheral mechanism.

ACKNOWLEDGEMENT: Authors are grateful to the Authority of the Khulna University, for giving the opportunity to conduct such experiment and providing necessary chemical, instrument and utility support.