ABSTRACT: Epilepsy is a neurological disorder which often requires lifelong treatment with antiepileptic drugs (AEDs). Prolonged use of AEDs is associated with changes in vascular risk markers. Hence, the study was designed to evaluate the effect of older generation AEDs (carbamazepine and phenytoin) and newer generation AED (levetiracetam) monotherapy on the markers of vascular risk in epilepsy patients. This study was carried out in the neurology department of a tertiary care hospital for a period of 7 months. Clinical and biochemistry reports of 90 patients were collected in designed case report forms. All statistical analyses were performed using IBM Statistical Package for Social Sciences (SPSS) 17 and Graph Pad Prism 7.0. We observed statistically significant changes in the lipid profile and C-reactive protein (CRP) in carbamazepine and phenytoin received groups. We did not observe any statistically significant difference in the above parameters in levetiracetam group. Thus, careful monitoring of the serum lipid profile and CRP at regular intervals throughout the treatment course is considered necessary in epileptic patients undergoing long-term treatment with enzyme inducing AEDs.

INTRODUCTION: Epilepsy is a neurological disorder characterized by the recurrent and unpredictable occurrence of seizure. A Seizure is a sudden surge of electrical activity in the brain which produces transient alteration of behaviour due to the disordered, synchronous, and rhythmic firing of populations of brain neuron.

The word “epilepsy” requires an event of at least one epileptic seizure 1. World Health Organization (WHO) estimates that 8 per 1000 population worldwide have epilepsy. Prevalence of epilepsy is higher in developing countries as compared to developed countries 2.

In developing countries like India, the incidence of epilepsy which is a measure of number of new persons with epilepsy per 100,000 populations per year ranges from 100-190 per 100,000 populations, whereas in most developed countries it may range from 40-70 per 100,000 populations 3. Identifying a people with epilepsy is difficult. Therefore, estimation of incidence and prevalence are difficult to achieve precisely. Epidemiological studies suggest that 70- 80% of people developing epilepsy will go into remission, while the remaining patients continue to have seizures 4. The most common risk factors for epilepsy are cerebrovascular disease, brain tumour, alcoholic, traumatic head injuries, malformations of cortical development, genetic inheritance, and infections of the central nervous system 5. Different types of epilepsy have different causes and their spread depends of age, racial, social class, geographic, or national boundaries 6.

The term “antiepileptic” is used synonymously with “anticonvulsant” which describes drugs that are used to treat “epilepsy”. The goal of AED therapy in patients with epileptic seizures is to achieve a seizure-free status without adverse effects 7. Though AEDs are categorized into different types on the basis of their mechanism of action, chemical structure and pharmacokinetics they are most commonly recognized as older and newer generation AEDs.

Patients with epilepsy often require lifelong treatment with medications. Empirical evidence suggests that prolonged use of AEDs is associated with changes in vascular risk markers, particularly carbamazepine and phenytoin might modify some vascular risk factors 10. In addition, some researchers found that newer antiepileptic drugs like lamotrigine and levetiracetam has no influence on vascular markers 11. Vascular disease is an unusual condition which affects the blood vessel, arteries and veins. Carbamazepine and phenytoin are the most frequently prescribed older generation AEDs. Levetiracetam and lamotrigine are often prescribed newer AEDs 12. Both carbamazepine and phenytoin inhibits sustained repetitive firing by blocking use-dependent sodium channels 13.  Levetiracetam produces antiepileptic effects via adherence to the synaptic vesicle protein SV2A and modulation of neurotransmitter release 14. Therefore, carbamazepine, phenytoin and levetiracetam are chosen for our study.

The present study was designed to evaluate the effect of older generation AEDs (carbamazepine and phenytoin) and newer generation AED (levetiracetam) monotherapy on the markers of vascular risk in epilepsy patients.

MATERIALS AND METHODS: The study entitled “Assessment of potential effect of monotherapy anti-epileptics drug usage on the markers of vascular risk in epilepsy patients” was conducted as a prospective observational study in the Neurology department of Tertiary Care Hospital for a period of 7 months (September 2016 -March 2017). The study protocol was approved by the institutional ethics committee of RVS Institute of Medical Sciences (Approval no: IEC/ RVSIMS/2016/5).

Consent from Hospital Authority: The protocol of the proposed study was submitted as printed copies to the medical superintendent and neurologists for review and approval. Guidance of the senior neurologist available was extended on request from the scholar. Consent from the hospital authorities and neurologists were obtained before accessing the data from the patients. Patients who fulfilled the inclusion criterion were documented from the case sheets and recorded in a separately designed case report form. Written informed consents were obtained after explaining the study protocol to each individual patient.

Study Design and Sample Size: A total of 90 patients with epilepsy were enrolled in the study. Patients of both the genders with epilepsy, 18-60 years of age were included in the study. A known history of cerebrovascular/ cardiovascular disease, hypertension, renal or hepatic disease, diabetes mellitus; psychiatric history or any other concomitant disease which may lead to unreliability in clinical assessment; significant alcohol, drug or medication abuse, tobacco users; women who were pregnant or lactating were excluded from the study.

The study comprised of three groups and each group included 30 patients as follows:

Group I: 30 patients who received Carbamazepine

Data Collection: Laboratory reports of all study subjects were collected from the laboratory of tertiary care hospital where study was conducted. Information regarding patients’ age, sex, diagnosis, treatment duration, medication history, lipid profile and CRP were collected in a case report form.

Statistical Analysis: Comparison between the groups was analyzed by means of one way analysis of variance (ANOVA), chi square test and student t-test to determine the presence or absence of statistically significant difference wherever necessary. Wherever computed, a P value of less than 0.05 was considered significant, since the confidence interval was maintained at 95%. Bivariate analyses were carried out by pearson correlation. All statistical analyses were performed using IBM SPSS 17 and Graph Pad Prism 7.0.

Statistically significant difference in the above parameters was not found between the groups.

Effect of AEDs on Lipid Profile and CRP: Increase in serum CRP level was observed after 6 months of treatment with carbamazepine and phenytoin (P<0.0001). Phenytoin treated group was found to be more potent in increasing serum CRP levels than carbamazepine group as shown in Table 2.

Changes in serum lipid profile after 6 months of treatment were found to be significantly high in carbamazepine and phenytoin treated groups which are shown in Table 3. 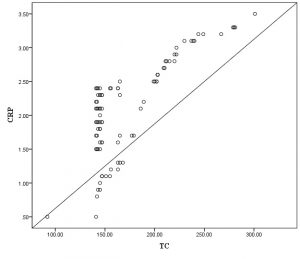 FIG. 2a: CORRELATION OF TC WITH CRP 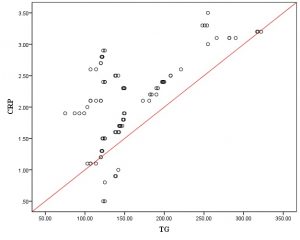 FIG. 2b: CORRELATION OF TG WITH CRP 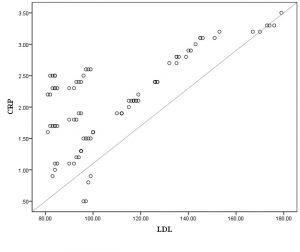 DISCUSSION: Atherosclerosis is an inflammatory disease which is the leading cause of death in the developed countries. Certain epidemiological studies have indicated that death rate from atherosclerosis related cardiovascular disease (CVD) are slightly elevated in epileptic patients taking AEDs 15. In the current study, effectiveness of carbamazepine, phenytoin and levetiracetam on vascular risk markers has been comparatively evaluated. Since phenytoin and carbamazepine are enzyme inducing AEDs, the mechanism by which they affect the vascular markers are closely related 16.

Carbamazepine and phenytoin are principally metabolized by the hepatic P450 microsomal enzymes which also help in the conversion of cholesterol into bile acids.

This agrees with the result of our study which showed that increase in the level of lipid profile was significantly higher in carbamazepine and phenytoin treated groups. Excess level of serum lipids begins to seep into the inner wall of the artery. This triggers an inflammatory response which actually speeds up the accumulation of cholesterol in the artery wall. This in turn produces more inflammation 19. Eventually the deposited cholesterol hardens into a plaque which can rupture and lead to the blood clots that cause heart attacks and strokes 20. CRP is considered a marker of atherosclerosis and a predictor of vascular inflammation.

Therefore, the effects of AEDs on CRP levels are considered significant. Patients with epilepsy on several AEDs were reported to have higher serum CRP concentrations compared with individuals without epilepsy 21, 22.

Our study showed that level of CRP is increased in carbamazepine and phenytoin treated groups after 6 months of therapy. Furthermore, CRP had significant positive correlation with lipid profile (TC, LDL & TG) as shown in Fig. 2a, b and c which implies that concentration of CRP in the blood could depends on serum lipid level.

Elevated level of lipid profile concentration except HDL and CRP during treatment might be associated with an increased risk of vascular disease in patients with epilepsy.  Therefore, careful monitoring of the serum lipid profile and CRP in epileptic patients undergoing long-term treatment with enzyme inducing AEDs is considered necessary.

ACKNOWLEDGEMENT: The authors are thankful to the patients who participated in the study and management of Sri Venkateswara College of Pharmacy for providing excellent research guidance and support.