Background: Since prescribing is the first and foremost component in the process of using drugs, it is a vital element in rational drug use. The concept of rational prescribing requires that the prescriber follows correct and complete prescription writing.

Objective: To assess prescribers adherence to the basic standards of prescription order writing in Serbo and Assendao health centers.

Methodology: In this retrospective study, a total of 424 prescriptions were selected as a sample from the two health centers using systematic random sampling technique and data was collected using pre-tested format from January 3 to 28,2007.

Conclusion: The finding of this study showed that, in General, there is poor adherence to the basic standards of prescription order writing in both health centers. In order to improve adherence, various educational, managerial and regulatory interventions should be designed and implemented by the concerned technical and administrative bodies

INTRODUCTION: A prescription is a written, verbal or electronic order from a prescriber to a dispenser designating a specific medication for a particular patient at a specified time. A prescription should be clear, legible and should indicate precisely what  should be given so that it can be correctly interpreted by the dispenser and leave no doubt about the intension of the prescriber. There is no global standard for prescription writing and every country has its own regulation. In general the following details should be shown clearly on the prescription order :Date of prescription ,Patient information (name, age, sex, address and card number),  Medication information (name, strength and dosage form) , Dispensing directions for the dispenser, Direction for use, Refill and other information, like special advice or warning, The prescribers name and signature 1, 2.

Now a days a more advanced means of prescribing which is a computerized (electronic) prescribing is in use especially in developed nations. Electronic prescribing has an important advantage over hand written prescribing in that, it enables the transmission of legible prescription, which intern greatly minimizes or even eliminates the interpretation error that can occur with hand written prescription Medication error, which includes inappropriate prescribing like omission of needed prescription information and illegible writing can affect counseling of patients and patients ability to manage self care. It also reduces patient’s adherence to therapy and a sense of being involved in one’s own care. Medication errors also are associated with a significant number of hospitalizations each year as well as numerous reports of morbidity and mortality 3.

In the study conducted on prescription writing patterns and errors in a family medicine residency programme in St. Margaret Memorial hospital, Pitts burgh, Pennsylvania ; among copies of 1814 prescriptions analyzed during  the study ,one – third ( 1/3) of the prescriptions were written using the generic name. On the average 21% (373) of all prescriptions collected contained at least one prescription writing errors, errors were characterized as omission (6%) unfulfilled legal requirements (1%) incomplete directions (1%) and unclear quantity to be dispensed 4. .

In the study on assessment of prescription errors in UK clinical care units, it was observed that among the total of 21,589 prescriptions collected for study, 15% of the prescriptions had one or more prescription errors and among all errors 47.9% of the errors was due to not writing the order according to the British National formulary recommendation, non standard nomenclature and writing illegibly 5.

A study on health technology assessment perspective on prescription writing was conducted in 3 hospitals found in Copenhagen, Denmark. In this study it was reported that out of the 709 prescriptions collected for the study, 428 (60.4%) were unambiguous, in 664 (93.7%) prescription, drug were written with their commercial drug name (brand name) and only 65 prescription (9.2%) contained drugs with there generic name, and in 411 (57.9%) of prescriptions, dosage forms of drugs were stated. The strength or concentration of drugs were sated in 44(6.2%) of the prescriptions .The dose, the schedule, the dosing time and the duration was stated for 614 (8.6%), 602(84.9%), 132(18.6%) and 673(94.9%) prescriptions, respectively 10.

MATERIALS AND METHODS: The study was conducted in Serbo and Assendabo health centers, Jmma zone, Oromiya region, south west Ethiopia. Retrospective study was done on those   prescription  written from 2005 to 2007 . Systemic random sampling was used to collect the data (the prescriptions) and  the sample size was calculated using appropriate formula given below; that give a total number of  384 prescriptions.

Giving certain allowance, a total of 424 prescriptions (212 prescriptions  from each health center) were collected and proportionally allocated between the two health centers. As to the ethical consideration, formal letter was obtained from Jimma university and appropriate ethical approval and confidentiality was obtained. Data was cleared, categorized, compelled and analyzed manually by descriptive statistics using scientific calculator

RESULTS: Data was cleared, categorized, compelled and analyzed manually by descriptive statistics using scientific calculator. Results were presented in the form of tables, figures and percentages

TABLE 1: THE NO. AND PERCENTAGE OF PRESCRIPTION ORDERS CONTAINING PATIENT INFORMATION AND OTHER RELEVANT PARAMETERS IN SERBO AND ASSENDABO HEALTH CENTERS, MARCH 2006.

TABLE 2: THE NO. AND PERCENTAGE OF DRUGS WITH SOME IMPORTANT DRUG INFORMATION PARAMETERS IN  SERBO AND ASSENDABO HEALTH CENTERS, MARCH 2006 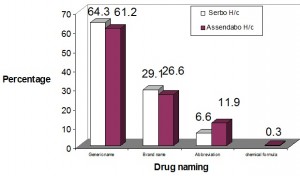 FIGURE 1:  PERCENTAGE OF DRUGS WITH DIFFERENT FEATURES OF NAMING WRITTEN IN PRESCRIPTION ORDERS OF SERBO AND ASSENDABO HEALTH CENTERS, MARCH 2006.

DISCUSSION: Prescription writing is an important aspect of medical practice. A properly written prescription is the basis for giving appropriate information, instructions and warnings to the patient and it ensures adherence to therapy and protects the patient from unnecessary harm related to therapy.

The most carefully conceived prescription order may become therapeutically useless, unless it communicates clearly with the dispenser and adequately instructs the patient on how to take the prescribed medication. In general, poor adherence to the basic standards of prescription order writing can lead to incomplete treatment in terms of safety, efficacy and cost of drug therapy 2.

In our study, a number of prescription orders were found missing certain essential components.

As shown in the result, percentage of prescription in which date is omitted are 24. 5% and 55.2% in Serbo and Assendabo health centers, respectively; which is a much higher omission than that observed in study done in Malaysia 11 and Gondar teaching Hospital 12. Prescriptions should be dated at the time they are written and also when they are received and filled in the dispensary, because the date of the prescription order is important in establishing the medication record of the patient. Unusual lapse of time between the date a prescription was written and the date it is brought to the dispensary should be questioned by the dispenser to determine if the intent of the prescriber and the need of the patient can still be met. The date of a prescription is also important to the dispenser in filling prescriptions for controlled substances.

In this study, only less than 5% of the analyzed prescriptions lack information regarding the Age and sex of the patient in Serbo health center and the age of the patient in Assendebo health center, which shows a better figure (i.e. better adherence), when compared to studies done in France 6, Gondar 12 and Wollo  13. But the sex of the patient was missed in (18.9 %) of the prescription orders in Assendabo health center, which shows a much lower omission when compared to the report from Wollo  13. Age is one of the valuable factors that affect response to drugs. This is because in addition to other factors, for example weight, Age of the patient is also an important factor in calculation or determination of doses. Moreover, selection of appropriate dosage forms of drug also depends on age.

Writing the dosage form and strength of a given drug on prescription order is very important. The omission of strength or dosage form can pose a problem in that a number of drugs are available in various strengths and dosage forms,

In the study, the dose and frequency of administration were recorded in 85.7% and 79.3% of the prescriptions in Serbo health center and 89.7% and 84.4% in Assendabo health, center respectively. These values are less when compared to results obtained from Malaysia 11 and Gondar 12. Omission of dose and frequency of administration of a given drug could lead to indiscriminate and inappropriate use of drugs, which may result in therapeutic failure or drug toxicity.

In conclusion, this study showed that, in both health centers, essential components of prescription order that could have medical, economical and medico legal importance were omitted.  In order to improve adherences of prescribers to the basic standards of prescription order writing, prescribers must first believe in the importance of correct prescription writing and be aware of the problems associated with poor prescription writing and give attention and be persuaded to adhering to it. In order to achieve this, various interventions such as educational, Managerial and regulatory strategies should be designed and implemented by the concerned technical and Administrative bodies.

ACKNOWLEDGEMENTS: Our appreciation goes to Student Research Program (SRP), Jimma university for funding the research. We are also grateful to Dr. kaleab Asres, school of pharmacy AAU; w/o Abise Gudeta  and w/o Alemtsehay Tilhaun for their unreserved support. Finally we would like to thank  Serbo and Assendabo health centers Administrators and pharmacy staffs for their kind cooperation during the time of data collection.