ABSTRACT: Neopterin, pyrazino-pyrimidine compound, is a metabolite of guanosine triphosphate and is produced by the activated monocytes, macrophages and dendritic cells upon stimulation by interferon gamma produced by T-lymphocytes. Aim: This study purposed to analyze the serum level of neopterin and to evaluate its correlation with other markers of inflammation in patients with type 2 diabetes at various stages of diabetic nephropathy. Methods: The study done on 80 patients, aged (60 years ±5) with type 2 diabetes, and 60 healthy subjects, aged (50 years±8) recruited from outpatient clinic of nephrology department in Al yarmouk hospital. The serum levels of neopterin, high sensitive C-reactive protein (hs-CRP), interluekin-six (IL-6), tumor necrosis factor-alpha (TNF-α) and interferon-gamma (IFN-γ) were assayed by using enzyme-linked immunosorbent assays (ELISA) kits, and studied. Results: The level of serum neopterin was higher in diabetic patients than in control subjects. There were gradual increases of serum neopterin levels from stage two to stage three and four in diabetic patients. Serum neopterin level correlated positively with serum levels of hs-CRP, IL-6, and IFN-γ and correlated negatively with estimated glomerular ﬁltration rate value. Conclusion: Serum neopterin level is elevated and correlated with the severity of diabetic nephropathy. It may use as a good biomarker for an accurate identification and prognosis of the diseases associated with the activation of cell-mediated immunity.

Increased neopterin concentration in the urine or blood due to activation of cellular immunity and an endogenous release of INF-γ may affect cellular redox state because of interactions between neopterin or its derivative with reactive oxygen or nitrogen intermediates 3.

Neopterin levels are elevated in several conditions including autoimmune diseases such as systemic lupus erythematosus and rheumatoid arthritis 4; infections such as hepatitis, human immunodeﬁciency virus, and cytomegalo virus 5. Elevated neopterin level observed in patients with various cancers and in all cancer types investigated, high neopterin levels were signiﬁcantly associated with a poor prognosis 6.

All eligible participants provided written informed consent to partake in this study. The study protocol conforms to the ethical guidelines and approved by the institution’s ethics committee.

Results are shown as mean ± SD with 95% confidence interval (CI), and P values of (0 <0.05) were regarded to be statistically significant. All statistical analyses performed using series SPSS version 18.

RESULTS: Details and clinical data of the studied groups showed in Table 1. There were no diﬀerences in age and gender distribution observed between control and patients. Of the 80 patients with diabetic nephropathy, 28 were in stage two (G2), 30 in stage three (G3), and 22 in stage four (G4).

TABLE 1: THE DEMOGRAPHIC AND CLINICAL DATA OF THE STUDIED GROUPS

In contrast to healthy subjects, serum neopterin level was notably higher in patients with diabetic nephropathy (Table 1) and it is seemed to be 5 folded more than its level in control subjects (Fig. 1). 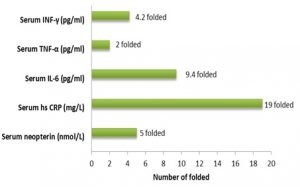 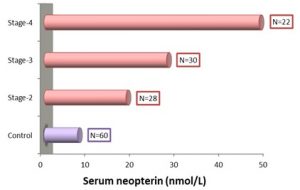 FIG. 2: BAR GRAPH SHOWED THE MEAN SERUM NEOPTERIN LEVELS (nmol/L) AND THE NUMBER (N) OF THE PARTICIPANTS IN HEALTHY CONTROL AND IN DIFFERENT STAGES OF DIABETIC NEPHROPATHY

TABLE 2: CORRELATION COEFFICIENT (r) OF SERUM NEOPTERIN LEVEL WITH THE ESTIMATED GLOMERULAR FILTRATION RATE VALUE AND WITH THE SERUM LEVELS OF OTHER INFLAMMATORY MARKERS IN DIABETIC PATIENTS

There were high significant increases in mean serum levels of other inflammatory biomarkers found in patients with diabetic nephropathy as compared to control subjects, at which hsCRP increased 19 folded , IL-6 increased  9.4 folded, TNF-α increased 2 folded and IFN-γ increased 4 folded , Fig. 1.

DISCUSSION: The current study showed that the patients with diabetic nephropathy exhibited high signiﬁcant increase in serum level of neopterin compared to healthy subjects, and this increase correlated positively with the increased circulating levels of several inflammatory biomarkers (hsCRP, IL-6, and IFN-γ).

Serum level of neopterin reveal continuous increases with the decreasing GFR, these ﬁnding is consistent with previous studies 10, 11 that proposed the decreased renal elimination and/or increased inflammatory reaction on renal function are behind the progressive increased in neoptrin levels.

Other study showed that the elevated activity of the pteridine pathway leads to the generation of singlet oxygen, hydroxyl radical and nitric oxide 12, which may affect renal function and decreased renal elimination.

Grossmann et al. in 2015, noted that neopterin level was positively associated with the prevalence of the diabetes disease 13. As well, neopterin considered as a marker of diabetic progression and complication 14.

The diabetic patients in the current study showed inflammatory activation and increases in the inflammatory biomarkers (CRP, IL-6, IFN-γ, and TNF-α) levels which are consistent with other study done on patients with chronic kidney disease 11.

Conversely, other study reveal weak association of CRP level with diabetes prevalence after adjusting other cardiovascular risk factors and comorbidities and this occur may be due to the early activation of the immune system 13.

CRP is one of the inflammatory biomarkers for type 2 diabetes–associated cardiovascular diseases 15, 16. The regulatory functions of CRP include enhancement of leukocyte reactivity, complement fixation, and modulation of platelet activation 17.

Furthermore, cytokines such as IL-6, or TNF-α that may contribute to islet cell autoimmunity in type 2 diabetes through activation of T cells, B cells, and macrophages may increase expression of β-cell antigens, and subsequent β-cell apoptosis 18.

In 2004, Bodlaj et al. documented that the presence of type 2 diabetes mellitus in addition to end stage renal disease (ESRD) was not associated with the further increases in serum levels of the inflammatory parameters, i.e. the deteriorated prognosis of diabetic ESRD patients is probably not associated with the activation of inflammatory processes 19.

Glucocorticoids drugs may cause suppression of cell-mediated immunity and consequently result in decreased neopterin levels. As well, statin drug, which has anti-inflammatory effects by inhibiting HMG-CoA (hydroxyl methyl glutaryl – CoA) can decrease serum level of neopterin 25. Therefore, patients taking these drugs excluded in this study.

CONFLICT OF INTERESTS: There is no conflict of interests to declare.

ACKNOWLEDGMENTS: I thank the doctors and other medical staffs for data collection and analyses and I appreciate all the patients and subjects participating in this research.