ABSTRACT: The main objective of this study was to Assessment of the acute toxicity of ethanolic extract of Polyherbal formulation in Swiss albino mice. In this study, the acute oral toxicity study of ethanolic extract of PHF1 was carried out according to Organization for Economic Co-operation and Development (OECD) guideline 423 and 407 on Swiss albino mice (20–30 g). In the study, the oral dose of 2000 mg/kg of PHF1 extract was administered in the treated group. General behavior, morbidity, and mortality were determined up to 72 h and compared to control group. Further animals were investigated for a period of 3days assess any other toxic effect. Behavioral changes and other parameters such as body weight, hematological parameters, and biochemical parameters were evaluated and compared to the normal group. The result of the study was mentioned that In acute toxicity study, treatment groups revealed neither morbidity nor mortality or any significant changes in behavior only drowsiness, sedation, and lethargy were observe in the group having 2000 mg/kg of Polyherbal formulations extract. In the acute toxicity study, no change in organ weight, hematological, biochemical parameters were observed when compared to the control group. The result concluded that the oral administration of Polyherbal formulations extract didn’t produce any significant toxic effect in Swiss albino mice. Hence, Polyherbal formulations extract can be utilized safely for the treatment of Parkinson's disease (PD).

INTRODUCTION: Toxicology is defined as a stem of science of poisons, as well as a toxin is defined as some material that cause a dangerous outcome when administer both by accident or propose, to a living being.

Toxicity may be acute or chronic and can vary from one organ to another as well as vary with age, genetics, sex, diet, physiological situation, or the health status of the living being 1, 2. Toxicity depends on the route of entry into the body, whether through the alimentary canal, the lungs, or the skin 3.

Acute Toxicity Studies: Acute toxicity is generally defined as the adverse change(s) happening immediately or a little time following only a short time of exposure to material or substances 4.

An adverse effect is "any outcome to results in useful injury and/or biochemical lesions” that may affect the show of the complete organism or that decrease the organ's capacity to respond to a supplementary challenge" 5, 6. Studies of acute systemic toxicity effort to decide the dose-dependent adverse outcome that may occur, and different suitable data may be collected when determining the complete acute toxicity profile of a substance 7, 8. Acute toxicity evaluation of lead/drug is followed by using the OECD Guideline no. 420, 423, and 425. Acute systemic toxicity is assessed following oral, dermal and/or inhalation exposure(s) - depending upon the expected routes of personal exposure to the material 9.

Plant Collection and Extraction of Plants: In this study, different parts of plants were used. The whole plant of BM, fruits of EO, a seed of MP, and root of WS were taken. The selected parts of plants were collected in and around Central Institute of Medicinal and Aromatic Plants (C-MAP -CSIR) Lucknow, Uttar Pradesh, India. These plants were authenticated by Botanical Survey of India (BSI), Dehradun vide authentication number Tech./Herb/ 2018-19/118502-05. The voucher specimens of plants are placed in department of pharmacognosy at our institution. Four plants (MP, BM, WS and EO) were extracted by different solvents using soxhlet apparatus. Different extracts were obtained by using different solvents like n-hexane, chloroform, ethyl acetate and ethanol. The extracts were evaporated to dryness at low temperature (<40°C) under reduced pressure in a rotary evaporator. The percentage yield of all extracts was calculated and extracts were stored in air-tight desiccators for further analysis 10.

Development and Optimization of PHF: PHFs were prepared by using the extracts in different ratios. Each 1g of PHF contains a different amount of extracts of BM, EO, WS and MP. The prepared PHFs were optimized by using DPPH assay 11.

Test Animals: Male albino mice of Swiss strain were used for the study. Animals were received from the animal house of Goel Institute of Pharmacy and Sciences, Lucknow, India. Experimental animals were handled according to regulations of Committee for the Purpose of Control and Supervision of Experiments on Animals (2014/PO/Re/S/18/CPCSEA). The animals were maintained under standard conditions of humidity, temperature (25±5°C) and light (12 h light/dark). The animals were acclimatized to animal house conditions and fed with standard pellet diet and water ad libitum. The mice were maintained their life cycle.

Acute Oral Toxicity: For the acute oral toxicity study, of ethanolic extract of PHF1 was evaluated according to Organization for Economic Co- operation and Development (OECD) guideline 423 on Swiss albino mice. The animals were maintained at 22±5 ºC with humidity control and as well on an automatic dark and light cycle of 12 hours. The animals were fed by the standard feed and provided ad libitum drinking water. In every group, 6 animals were taken (approx. bodyweight 20–30 g in mice). The experimental animals were subjected for acclimatization for 3 days prior to experiments. Fixed-dose procedures were followed for the experimental animals, while control animals received only vehicles. The test substances were administered through gastric gavage. The animals were observed for any toxic effect for the first 4 h after the treatment period. Further animals were investigated for a period of 3 days for any toxic effect 12, 13. Behavioral changes and other parameters were also considered for the study, such as body weight, urination, food intake, water intake, respiration, convulsion, tremor, temperature, etc. 14, 15

Observational, Hematological and Biochemical Study: In the acute oral toxicity, the animals were checked for mortality and every sign of ill health at hourly distance on the day of administration of test substance, and thereafter a daily general case side clinical examination was carried out, including changes in the skin, mucous membrane, eyes, occurrence of secretion and excretion, etc. Also, change in gait, posture, and response to treatment were also to be recorded 16. In addition to the observational study, body weights were to be recorded, and blood samples to be collected from all the animals on the 7th day of the experiment in acute oral toxicity. The samples were to be analyzed for total RBC, WBC, differential leucocytes count (DLC), hemoglobin percentage, and biochemical parameters similar to ALP, SGPT, SGOT, total cholesterol, triglycerides, creatinine, bilirubin, serum protein, and tissue protein activity. Weights of vital organs like liver, heart, kidney, etc., were to be recorded 17.

RESULT: PHF1 showed potent Anti-Parkinson activity via an in-vivo model. Hence its preclinical safety evaluation was carried out in Swiss albino mice. In this context, acute oral toxicity was conducted in accordance with OECD test guidelines no. 423 and 407.

Observational Parameter: Animals treated with PHF1in acute oral toxicity study were observed from 0 days to 7th day of experiment for mortality, morbidity, etc. No observational changes, mor-bidity, and mortality were recorded throughout the experimental period in all the groups of experimental animals.

Body Weight: The body weights of animals were recorded at the 0 day of the experiment from all the groups of animals and non- significant changes was found in PHF1 treated groups when compared with vehicle control Fig. 1. 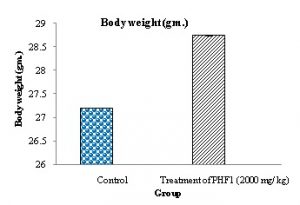 FIG. 1: CHANGES OF BODY WEIGHTS OF ANIMALS AFTER-TREATMENT OF PHF1

Organ Weight: The animal was necropsied for gross pathological changes of vital organs &no gross changes were observed in the organs studied like liver, kidney, and brain.

The organ weight showed non- significant changes among all experimental groups both in absolute and relative terms and was presented in Table 2 and Fig. 2.

Hematological Parameter: Blood samples were collected from all the groups of animals at the end of the experiment. All hematological parameters like hemoglobin level, total RBC counts, total WBC counts, DLC were studied & non-significant changes were found in treated groups when compared to control. RBC, WBC, and Hemoglobin, were presented in Table 3 & Fig. 3.

Biochemical Parameter: Serum samples collected from all experimental groups were tested for SGOT, SGPT, ALKP, creatinine, cholesterol triglyceride, albumin, and serum protein levels. There were non-significant changes in all biochemical parameters studied in the experimental group (2000 mg/kg) when compared to the control. These parameters were presented in Table 4. 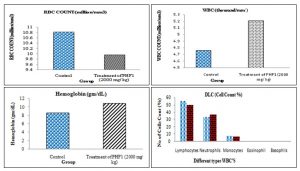 DISCUSSION AND CONCLUSION: The present research was aimed to evaluate the ethanolic extract of PHF1for acute toxicity study and to identify the range of doses that could be used for further studies. The oral acute toxicity study of PHF1 extract was carried out on Swiss albino mice at a single dose of 2000 mg/kg body weight and was continuously monitored for the first 4 h, followed for a period of 72 h for any toxic effect after the treatment period. No major changes in behavior and mortality were observed in the animal group. However, sedation and drowsiness were confirmed in 2000 mg/kg body weight in the treated group.  The PHF1 extract seems to be safe at a dose level of 2000 mg/kg, and the LD50 is considered to be >2000 mg/kg. Any pharmaceutical drug or compound with an oral LD50 higher than 2000 mg/kg could be considered safe and low toxic. This suggests that the ethanolic extract of PHF1is practically non-toxic in a single dose of level 2000 mg/kg body weight 22, 23.

However, with respect to multiple doses uses in the treatment of the CNS disorder like Parkinson disease, Alzheimer disease, Epilepsy, whether it will be safe and have no effect on relative organ weight, hematological and biochemical parameters that can be confirmed from its toxicity study24. An acute toxicity study was carried out as per OECD guideline 25. Decreases or increases in body weights are associated with the toxic effects of chemicals and drugs.

Scientific evidence confirmed that increases or decreases in the body weights are accompanied by accumulation of fats and physiological adaptation responses to the plant extracts rather than to the toxic effects of chemicals or drugs that lead to decrease appetite hence lower caloric intake by the animal 26. The relative weight of the vital organs was found normal, indicating no toxic effect in both control and treated groups, and there were statistically non-significant differences (P>0.05). The bone marrow is responsible for the production of the blood cell, and some phytochemicals isolated from the plant have affected red blood cell levels. Hence, the tested PHF1 extract may not have harmful effects on bone marrow function and justify the fact that all doses of PHF1 does not induce anemia, making it safe. Similarly, estimation of serum biochemical parameters in treated animals showed non-significance (P>0.05) compared to control group 27.

The liver is the main target organ for drug or bioactive active compounds were exposed to the foreign substances being absorbed in intestines and metabolized to other compounds which may or may not be hepatotoxic to the mice. However, the transaminases enzyme SGOT (AST) and SGPT (ALT) were observed positive and showed a remarkable significant elevation (P<0.005) in PHF1 treated animals for 2000 mg/kg extract as compared to a respective control group. Increase (SGPT and SGOT) levels are responsible for causing inflammation, cellular leakage, and damage of cell membrane to cells in the liver 28. These results showed that the use of plant extracts of PHF1is safe and explained the extensive use of the plant as traditional medicine.

ACKNOWLEDGEMENT: The authors are highly thankful to Goel Institute of Pharmacy and Sciences; Lucknow (India), AVIPS, Shobhit University, Gangoh, Saharanpur; UP (India) for providing necessary infrastructure and support for research.

CONFLICTS OF INTEREST: The authors declare that they have no competing interests.