INTRODUCTION: Since ancient times, plants have been indispensable sources of both preventive and curative traditional medicine preparations for human beings and livestock. Historical accounts of traditionally used medicinal plants depict that different medicinal plants were in use as early as 5000 to 4000 BC in China and 1600 BC by Syrians, Babylonians, Hebrews and Egyptians 1. Beside their use in fighting various ailments at local level, different medicinal plants are used as export commodities, which generate considerable income 2.

It is known that many countries in Africa, Asia and Latin America use traditional medicine (TM) to meet some of their primary health care needs.

In Africa, up to 80% of the population uses traditional medicine for primary health care 3. Traditional medicine has maintained its popularity in all regions of the developing world and its use is rapidly spreading in the industrialized countries. In China, for example, traditional herbal preparations account for 30% - 50% of the total medicinal consumption. In Ghana, Mali, Nigeria and Zambia, the first line of treatment for 60% of children with high fever resulting from malaria is the use of herbal medicines at home. WHO estimates that in several African countries traditional birth attendants assist in a majority of births 3, 4.

The World Health Organization (WHO) defined traditional medicine as health practices, approaches, knowledge and beliefs incorporating plant, animal and mineral based medicines, spiritual therapies, manual techniques and exercises, applied singularly or in combination to treat, diagnose and prevent illnesses and maintain well-being 11. Traditional medicine was once again redefined in 2008 as the sum total of knowledge, skills and practices based on the theories, beliefs and experiences indigenous to different cultures that are used to maintain health, as well as to prevent, diagnose, improve or treat physical and mental illnesses 12.

Products made from botanicals that are used to maintain or improve health may be called herbal products or herbal medicines. They come under the class of complementary and alternative medicine (CAM) 13. But in many developing countries, medicinal plants have not been well studied, tested or documented. Most of the information is still in the hands of traditional healers and knowledge of healers is either lost or passed to generation by the word of mouth 14.

Africa is endowed with many plants that can be used for medicinal purposes to which they have taken full advantage. In fact, out of the approximated 6400 plant species used in tropical Africa, more than 4000 are used as medicinal plants 15. African traditional medicine is the oldest, and perhaps the most assorted, of all therapeutic systems. Africa is considered to be the cradle of mankind with a rich biological and cultural diversity marked by regional differences in healing practices 16, 17. African traditional medicine in its varied forms is holistic involving both the body and the mind. The traditional healer typically diagnoses and treats the psychological basis of an illness before prescribing medicines, particularly medicinal plants to treat the symptoms 16, 17, 18.

In Ethiopia, Traditional Medicine (TM) is a part of the national heritage 19. In Ethiopia, the use of traditional medicinal plants is widely practiced. The wide spread use of traditional medicine in Ethiopia could be attributed to cultural acceptability, efficacy against certain type of diseases, physical accessibility and economic affordability as compared to modern medicine. Traditional remedies are the most important and sometimes the only source of therapeutics for nearly 80% of the Ethiopian population and 95% of the preparations are of plant origin 20.

Also Ethiopia is the home of many nationalities and remarkably diverse flora, including numerous endemic species that are utilized in the different traditional medical practices 21. In Ethiopia, medicinal plants have been used as traditional medicine to treat different human ailments by the local people from time immemorial. These medicinal plants are estimated to be over 887 species that are currently used by the Ethiopian people 22, 23.

There is a high expectation of enormous traditional knowledge and use of medicinal plant species in Ethiopia due to the existence of diverse cultures, languages and beliefs among the people. However, since cultural systems are dynamic 24, the skills are fragile and easily forgettable as most of the indigenous knowledge transfer in the country is based on oral transmission 25.

There are a number of TMPs that reflect the diversity of Ethiopian cultures. Traditional medical practices related to surgery are bone setting, uvulectomy, bleeding by puncture, cupping, cauterization, scarification and tooth extraction. Others are provision of mineral substances, medicinal plants and animal products. There may also be many unrecognized traditional medical practices in different communities which may influence the health of community in different ways. This indicates that region-specific studies are important 26. In Ethiopia, a brief explanation about the nature of traditional medicine has also been given in the book of “Ethiopian herbal medicine” which was published in the year 2010. It described that many traditional medicinal plants found in Ethiopia were found to be useful and need to be conserved as a natural resources of the country 27. Although TM plays an important role in Ethiopian society, knowledge about the extent and characteristics of traditional medical practices is limited.

According to a population-based survey conducted in Wolayta, 90% of population uses TM in Ethiopia 28. Traditional medicine has remained as the most affordable and easily accessible source of treatment in the primary healthcare system of resource poor communities and the local therapy is the only means of medical treatment for such communities 29. Most of the studies were focused on traditional healers and specific diseased patient groups to assess the traditional medicine usage. This study was therefore aimed at assessing the traditional home remedies usage directly among people. The main objective of the study is to assess traditional home remedy usage among people in Harar, Ethiopia.

The study site was Kebele 6, Jugal in Harar, Ethiopia. Harar is the capital city for the Harari Regional State. Harar is located 500km away to east of Addis Ababa and 48km away from Dire Dawa. Based on 2000 (EFY) figures from the Central Statistical Agency (CSA) of Ethiopia, Harari has an estimated total population of 209,000, consisting of 107,000 men and 102,000 women. 37.3% of the population is estimated to be rural inhabitants, while 62.7% are urban dwellers. With an estimated area of 311.25 square kilometers, this region has an estimated density of 629.72 people per square kilometer.

According to the 2000 (EFY) Health and Health Related Indicators Publication by FMOH, Harari has 4 Hospitals, 3 Health Centers and 23 Health Posts 30. The study was designed as a descriptive community based survey design. This approach helped to collect the detailed descriptions of existing variables and use the data to assess the traditional home remedy usage among the people of kebele 6, Jugal in Harar, Ethiopia. The study population was residents of Kebele 6 region in Jugal, Harar, Ethiopia. The sample size was 338 respondents in kebele 6, Jugal in Harar, Ethiopia. Peoples were eligible for the study if they were 18 years of age or older, and people who were available at the time of data collection. Those peoples who were not willing to participate were excluded from the study. The sampling technique used was Convenience Sampling Technique.

The respondents were interviewed on a pre-tested structured questionnaire after their verbal consent. The data was collected by direct face to face interview by disseminating the questionnaire to the people in Kebele 6, Jugal in Harar, Ethiopia. The study was conducted from 15th March to 29th April. The data collection instruments were prepared based on the objectives of the study. A structured interview questionnaire based on traditional home remedy usage among people was selected for the study.

Articles, books, journals, published and web-site links were reviewed and used to build up a good tool for the study. The performa developed by the investigators to collect the relevant sample characteristics which contains 10 questions regarding socio-demographic variables such as age, sex, ethnicity, religion, marital status, type of family, educational status, occupation, family income and food habit. These lend a hand to identify the socioeconomic class of resident of kebele 6 in Jugal, Harar Ethiopia.

All processes were started after secure the ethical clearance from ethical clearance committee. A signed written consent obtained from the heads of institutions/facilities and head of house hold following an explanation, the purpose, risk and benefit of the study. Confidentiality of the data kept throughout the data collection and the entire study period. Interviews were conducted during their leisure time. 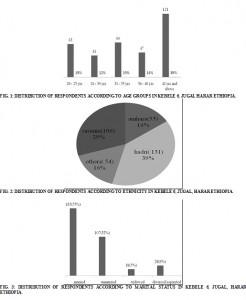 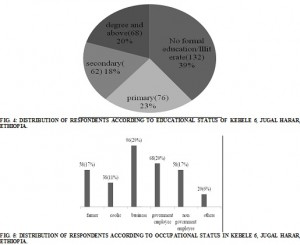 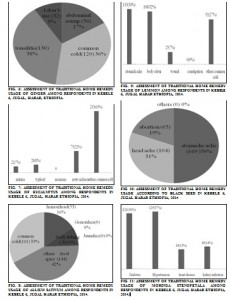 DISCUSSION: This study highlights the use of traditional home remedy in kebele 6, Jugal Harar Ethiopia. The prevalence of traditional home remedy usage in the present study was found to be similar to the previous studies report by Boyed el,et al. The study was conducted to examine home remedy usage by African American. According to the study Age, Gender, Living with grandparents and educational status of parents has great impact. When we see the present study there was 150(44%) and 188(56%) female. Most of them 121(36%) are above the age of 41 with educational status of no formal education/illiterate132 (39%) 31.

Birhan et al reported from a study conducted in Addis Ababa that traditional healer’s clinics considerably contribute to public health care in Addis Ababa. The diseases mostly treated by traditional healers were wound, inflammation, herpes zoster, hemorrhoid, fracture, paralysis, liver disease and cancer 32.  Consistent with this study the present study shows that the use of traditional home remedy for different types of ailments. For example, out of 338 respondents for the treatment of wound they use ocimum lamifolium 20(6%), Lemmon 25(7%), black mustard 46(14%) and fenugreek 66(20%), for the treatment of hemorrhoids they use allium sativum L 53(15%). This habit of traditional home remedy usage may be due to the easily availability and cost of modern medicine.

Competing Interests: The authors declare that they have no competing interest.

ACKNOWLEDGEMENTS: The authors are thankful to the residents of kebele 6, Jugal in Harar, Ethiopia. The authors were also grateful to the staffs from Haramaya University for their kind cooperation to fulfill this study.