ASSOCIATION BETWEEN HYPERURICEMIA, SERUM IRON LEVEL AND POSSIBILITY OF GOUT AMONG SAUDI PATIENTS: A RETROSPECTIVE STUDY

ASSOCIATION BETWEEN HYPERURICEMIA, SERUM IRON LEVEL AND POSSIBILITY OF GOUT AMONG SAUDI PATIENTS: A RETROSPECTIVE STUDY

ABSTRACT: The present study has been undertaken to evaluate the association between serum uric acid levels as a marker of iron overload in Saudi people. A retrospective cohort study was carried out at King Fahad Medical City in the Riyadh-central region of the Kingdom of Saudi Arabia for four months from 1st November 2018 to the end of February 2019 on the random sample of 117 medical files for Saudi patient of both genders. All the obtained data were analyzed by the SPSS program by considering various variables like serum uric acid, transferrin, hemoglobin, ferritin level, etc., in between hyperuricemic non-hyperuricemic patients. Serum uric acid, transferrin, ferritin, and hemoglobin levels were significantly (p>0.05) high i.e. 564.1 ± 127.7 vs. 417.6 ± 38.3 μmol/l; 3 ± 1 vs. 2.1 ± 0.8 g/dl; 658.9 ± 896 vs. 528.6 ± 920 ng/ml; 9.9 ± 2.2 vs. 9.7 ± 1.8 g/dl in hyperuricemic and non-hyperuricemic patients respectively. Pearson correlation between serum uric acid and hemoglobin, ferritin level, transferrin level indicate positive correlation (r = 0.21), (r = 0.46) and (r = 0.23) respectively. The findings of this study demonstrate a positive correlation between serum uric acid and iron markers (serum ferritin, transferrin, and hemoglobin) in Saudi patients. Undiagnosed hemochromatosis or iron overload should be considered as a possibility when there are elevated uric acid levels even in the absence of related symptoms.

INTRODUCTION: In the human body, serum uric acid is produced from purine metabolism; as such, serum uric acid does not play a major physiological role, but it possesses antioxidant property 1. The ampule of scientific literature suggests that elevated serum uric acid is a causative factor for gout and other chronic diseases such as cancer, diabetes mellitus, and cardiovascular diseases, and nonalcoholic fatty liver disease 2, 3.

Recent study revel that human tophi and synovial membrane of chronic gout patient have shown an elevated level of iron than the healthy patients. At normal physiological pH, urate crystals complexes with the cationic iron redox-active from in a dose-dependent manner, which causes an increase in oxidative stress 5.

Increased oxidative stress is a reason to activate the complement system and granulocyte and following synthesis and release of pro-inflammatory mediators like lymphokines 6. Moreover, it is well-known that deferoxamine is an iron chelator, which completely stops response in-vitro and decreased urate crystal-induced foot sloe's swelling in rats in-vivo.

Based on these findings, this has been postulated that elevated iron level is one of the confounding factors for hyperuricemia and subsequent formation of Gout 6.

It’s hypothesized that elevated uric acid has a positive relationship with an increase in serum iron content. So, controlling serum iron levels may be the key for prophylaxis of uric acid-dependent diseases. We hypothesized that serum uric acid concentrations would be higher in Saudi people with higher markers of iron status than those with normal or lower markers of iron status as counterparts. As per the literature survey, no previous study has been carried out to establish the correlation between the elevated iron level and circulating serum uric acid concentration.

Study Population and Research Design: We examined the association between elevated serum iron level and serum uric acid level on gout through prospective design in retrospective cohort studies at King Fahad Medical City in Riyadh, the central region of the Kingdom of Saudi Arabia. The study was carried out for the consecutive month i.e., 1st November 2018 to February 2019, in that 117 medical files of Saudi patients of both genders were examined (IRB log number: 18-633E).

We have included all the patients with gout in between the age group 40 and 60 of both the gender. All the non-Saudi patients, patients with other comorbidities, and who have high CRP were excluded from the study. 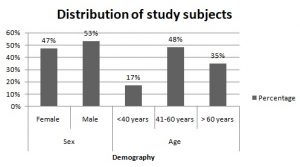 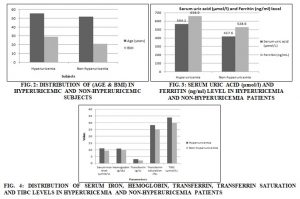 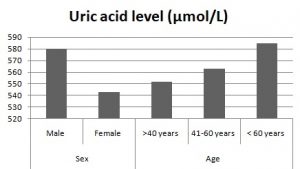 FIG. 5: DISTRIBUTION OF HYPERURICEMIC SUBJECTS ACCORDING TO SEX AND AGE

DISCUSSION: Serum ferritin is the storage form of iron in most body organs e.g., liver, pancreas, spleen, bone marrow, heart, and kidney. Physiologically, blood serum in humans contains a small quantity of ferritin 7. Iron deposits have been reported to be present in patients with rheumatoid arthritis but not in those with other joint pathologies 8. Previous studies in rodents have also shown an improvement in joint-related inflammation following the removal of iron by chelation treatment 6-9. Moreover, maintaining the low serum iron level in gout patients by phlebotomy procedure has shown a significant decline in the incidence of gout flairs 10.

Dietary habits play a major role in maintaining optimum serum iron levels. In humans, plant and animal sources provide non-heme and heme iron, respectively. It is interesting to know that people who consume a purine-rich diet of animal origin have shown an increased frequency of gout attack compared to patients who consume purine-rich foods from plant origin.

In Saudi Arabia, people rely more on the non-vegetarian diet compared to vegetarian food, so there is always an increased possibility of recurrence of gout flairs. Based on these observations, the present study was conducted to evaluate the association between serum ferritin, uric acid, and iron overload in Saudi patients 11.

The results indicated that hyperuricemia increase with advancing age and higher in males than females, which are consistent with many previous studies 12, 13, 14.

As discussed, iron overload may be a causative agent for gouty inflammation by establishing complexes with monosodium urate (MSU) crystals, provoking oxidative stress via the generation of reactive oxygen species, which contributing to granulocyte and complement activation. Uric acid scavenges free radicals of singlet oxygen and oxo-heme oxidant radials 15. So, it has been postulated that urate may decline the iron-catalyzed oxidative stress by acting as a metal ion chelator. Urate is proposed to reduce iron-catalyzed oxidative stress by acting as a metal chelator exposure of iron to the xanthene oxidase, which is the main enzyme source of xanthine oxidase and subsequent urate production 16, 17. This may explain a positive correlation between serum iron and serum urate levels. Previous studies have explained increase iron overload has a direct relationship in inclining in the serum urate level in both humans and rodents 18, 19. In fact, elevated urate level in serum is sometimes used as an indicator to screen for iron overload1. Our results showed a positive correlation between iron levels and urate levels (r=0.52) with a significant difference between iron levels between patients with hyperuricemia and patients without hyperuricemia.

In another study on 9726 American patients, Ghio et al., found a positive correlation between serum uric acid and serum ferritin 1. Additionally, Flais et al., showed that hyperuricemia was associated with an increase in ferritin in a sample of 738 French patients with hemochromatosis 20. Mainous et al., reached a similar conclusion that elevated levels of serum uric acid levels are associated with elevated levels of serum ferritin, which might serve as a risk stratification variable for the presence of iron overload 19. Also, in China, Zhang et al., conducted a 3-years cohort study on Chinese employees and found that high serum ferritin levels increase the risk of hyperuricemia 21.

Transferrin is the iron transporter that transports iron into cells through binding to transferrin receptor (TFR) 22. The results of our study indicated that transferrin as a marker for an iron load is positively correlated with uric acid levels in patients with hyperuricemia. The results showed a statistically significant difference in the ferritin level between hyperuricemia and non-hyperuricemic patients (p>0.05) and positive correlation between the uric acid level and transferrin level in hyperuricemic patients (r=0.46). This result is consistent with the results of several previous studies; the results of national health and nutrition examination survey III included 4794 males and 4932 females aged 20 or older in good health and showed a positive correlation between uric acid levels and ferritin in serum, in which the effect was independent of the effect of age, gender, body mass index, and alcohol consumption 1. Additionally, hemoglobin level was found to be significantly elevated in patients with hyperuricemia than patients with normal uric acid levels. This result is consistent with the findings of the previous study 23.

The underlying mechanism for the effects of serum ferritin, transferrin, and hemoglobin on serum uric acid is not fully elucidated. Ferritin can convert Fe2+ to Fe3+, owing to its high iron-binding capacity and ferroxidase activity. The iron is stored in ferritin as a compact, safe way to prevent the toxic effects of iron and make iron available when necessary; therefore, serum ferritin is widely used to evaluate iron level and status in clinical practice 21. The relationship of serum ferritin, the hemoglobin with hyperuricemia, could be a response to oxidative stress linked with the visceral toxicity of excess non-transferrin bound iron via the antioxidant properties of serum uric acid 11.

In our study, patients with elevated C-reactive protein (CRP) were excluded. So, the association between ferritin level and serum uric acid was independent of CRP, suggesting that the relationship is not due to an elevation of ferritin in inflammation and consistent with the direct role of iron metabolism in the control of serum uric acid and gout. This is supported by the previous report of an association of transferrin receptor in gout 11.

This is the first study conducted to explore the relationship between serum uric acid level and iron markers in relation to gout in Saudi patients. The study included both hyperuricemia and non-hyperuricemic patients from different age groups. However, an effect of smoking, physical activity and dietary intake not studies that may act as a confounding factor. Moreover, the small number of study subjects limits the generalizability of the results.

CONCLUSION: In conclusion, the findings of this study demonstrate a positive correlation between serum uric acid and iron markers (serum ferritin, transferrin, and hemoglobin) in Saudi patients. Undiagnosed hemochromatosis or iron overload should be considered as a possibility when there are elevated uric acid levels even in the absence of related symptoms. Further large scale studies are needed to confirm these findings and to elucidate the underlying mechanisms. Additionally, studies to determine the effect of lowering serum iron overload in improving hyperuricemia and thereby reducing the risk of gout are required. The clinician should consider further tests to rule out iron overload in cases with hyperuricemia.

ACKNOWLEDGEMENT: The authors thank the data collection staff of King Fahad Medical City in Riyadh, The central region of the Kingdom of Saudi Arabia.