INTRODUCTION: Single nucleotide poly-morphisms (snp) has gained considerable interest over the last decade, providing exciting and novel information regarding individual disease susceptibility, response to therapy and progression 1, 2. These SNPs, at least partially decide on an individual’s susceptibility to disease and response to therapy 2. Novel discoveries on  genetic variations in drug transporters, drug targets, effector proteins and metabolizing enzymes have provided better insights into the field of pharmacogenomics and its aims to achieve the best therapeutic outcome based on genomic insights, to ultimately lead to the development of “personalized medicine” 3.

Over the last many years, great efforts are made to understand the etiological mechanism by which T2D develops and inter individual variability for the same standard treatment therapy 4.A wide class of anti diabetic drugs are available for the treatment of T2D 5, 6.Among them Metformin, a biguanide, considered as a potent insulin sensitizer, is the most widely prescribed medicine for the treatment of T2DM 7. Metformin is the first-line of therapy for the management of T2D as it reduces blood glucose levels without the risk of hypoglycemia and checks on the progression of micovascular and macrovascular complications. Metformin controls blood sugar by suppressing hepatic glucose by inhibiting gluconeogenesis and decreasing intestinal glucose absorption 7, 10, 11.

Zhou et al., observed considerable inter-individual variability in the clinical Efficacy of Metformin 12. Metformin is transported across the plasma membrane by a group of transport proteins known as “organic cation transporters” (OCT’s). They are cationic transporters which translocate a wide variety of endogenous and exogenous cations. Polymorphisms in OCT’s  are believed to be responsible for inter patient variability in metformin therapy 13. Of this, OCT1 which is primarily present in the liver, is required for metformin uptake and pharmacological actions in the liver 14.

The SLC22A1 and SLC22A2 genes encode for OCT1 and OCT2, respectively. The gene encoding human OCT1, SLC22A1, is located on chromosome 6q25.3 and consists of 11 exons spanning 37 kb. Human OCT1 gene is highly polymorphic, leading to differences in transporter function which very well explains a possible mechanism accounting for variation in drug response 8, 15.

Many studies have been reported about single nucleotide polymorphisms in OCT1 gene among different population. The aim of the present study is to determine the genotype and allele frequency of OCT1 gene polymorphism(C/T allele) in diabetics and its association with glycemic status and serum metformin levels in the South Indian Tamilian T2M diabetes patients.

MATERIALS AND METHODS: The study was carried out in 60 Type II diabetic unrelated patients of South Indian Tamilian origin, aged between 35 and 55 years, of both sex,attending diabetic out-patient department of Rajah Muthiah Medical College Hospital, Annamalai Nagar.  Subjects of the study were randomly picked and were on Metformin (500 mg bd) therapy at the time of the study. Patients on insulin,smokers ,alcoholics, tobacco chewers, hypertension, and other systemic illness were excluded from this study.

Institutional Ethical Committee of Rajah Muthiah Medical College Hospital, Annamalai Nagar have approved the study and informed consent obtained from the patients. Genomic DNA was extracted from peripheral blood leucocytes using the standard phenol–chloroform method, and the samples were stored at -20 °C.

Anthropometric measurement: Anthropometric data including height, weight, blood pressure and BMI were measured. Body mass index (BMI) was calculated by dividing the weight in kilograms by height in meters squared.BP was measured with a standard mercury sphygmomanometer.

The PCR reaction was placed in the Master cycler (Eppendorf thermal cycler) that was programmed to improve the specificity of PCR amplification. There were 35 PCR cycles at the annealing temperature of 60°C with a final extension at 72°C for 10 min.PCR products were analyzed by electrophoresis on 3% agarose gels followed by ethidium bromide staining and inspection under UV light 20.

PCR product length was 257 base pairs. If band was obtained at 257 bp,it was considered positive for C allele.

RESULTS AND DISCUSSION: Diabetes Mellitus is a progressive polygenic disease which might arise either due to insulin resistance or due to inadequate secretion of insulin by the β-cells of pancreas ,contributing to hyperglycemia , dyslipedemia and artherosclerosis and coronary artery diseases 21, 22. According to the International Diabetes Federation, the number of diabetic patients in India will increase from 50.8 million to 79.4 million by 2030 (Prevalence of Diabetes available at www.idf.org, assessed on December 23, 2010).

Obesity is always associated with insulin resistance. Most of the obese individuals with or without metabolic syndrome develops peripheral resistance to insulin.

The maximum benefit of a drug is obtained when there is maximum efficacy. Metformin is used as a first line drug for the management of Type 2 Diabetes as it reduces liver gluconeogenesis, increases the peripheral utilization of glucose and lowers lipid levels 23, 24.

The present study was done to identify the patient group for whom metformin is potentially beneficial and for whom it is not. OCT1 was shown to be responsible for transporting metformin into hepatocytes, and for the hepatic glucose lowering effect of metformin 25. Metformin is regarded as an antihyperglycemic agent because it lowers blood glucose concentrations in T2D without causing overt hypoglycemia and is also frequently described as an insulin sensitizer leading to reduction in insulin resistance and significant reduction of plasma fasting insulin level.

The improvement in insulin sensitivity by metformin could be ascribed to its positive effects on insulin receptor expression and tyrosine kinase activity 26. The major action of metformin is exerted in the liver, by the activation of adenosine monophosphate-activated protein kinase (AMPK) 6, 9, 10.

AMPK is a phylogenetically conserved serine/ threonine protein kinase viewed as a master regulator of systemic and cellular energy status .It plays a crucial role in protecting cellular functions under energy-restricted conditions. AMPK is a heterotrimeric protein consisting of a catalytic α-subunit and two regulatory subunits β and γ and each subunit has at least two isoforms. AMPK is activated by increase in the intracellular AMP/ADP-or-ATP ratio resulting from imbalance between ATP production and consumption.

AMP binds to regulatory sites on the γ subunits of AMPK causing its activation which brings about conformational changes that allosterically activate the enzyme to bring out its metabolic effects on glucose and lipid metabolism 27, 28, 29. Activation (phosphorylation) of AMPK suppresses hepatic gluconeogenesis, and reduces glucagon-mediated glucose output by the liver 6, 8.

OCT1 gene polymorphisms have gained considerable attention due to their role in the differential response of metformin.  Metformin can act only in the presence of insulin and hence is beneficial only to those who have residual function of endocrine pancreas. The glycemic response to Metformin is variable, with some people having a marked response and others gaining no benefit. Polymorphisms of OCT1 have been described with variable effects on metformin response 14, 30.

A number of rare and relatively common SLC22A1 polymorphisms which has shown reduced efficacy to metformin in lowering blood glucose levels have  been identified. Many studies have proved that SNPs in OCT1 gene leads to decreased metformin uptake. In our study we analysed a SNP in OCT1 gene with rs12208357(C/T) allele. In the present study, geneotyping of rs122083571, the PCR method was performed to detect the C>T SNP in the SLC22A1 gene, which encodes OCT1, using  TaqMan SNP genotyping assay method. The primer design and polymerase chain reaction conditions are described in Shu et al., 14.By applying PCR conditions, better specificity was achieved, and the results were reliable. In this study, out of 60 patients 18 had SNP OCT1 (C allele). The C allele  frequency was 11% compared to the T allele frequency of 89%. The research further investigated the relatioinship between SLC22A1 gene, snp, serum Metformin levels and the glycemic status  in these T2DM patients treated with metformin.

No significant difference in age, blood urea and serum creatinine values between the C allele group and the T allele group. Data are expressed as mean ± SD, P<0.05 was considered statistically significant.

The serum metformin levels in C allele patients were significantly increased .Fasting plasma glucose, post prandial glucose and serum insulin levels were also increased in those patients(p<0.05). This explains that OCT1 transporter is required for the uptake of metformin into the liver. So in patients with C allele, metformin could not taken into the liver and hence its levels remained elevated in the blood stream 25. Since there is reduced uptake of metformin into the liver, the desired hypoglycaemic activity of the drug is not obtained and there is continuous hepatic  gluconeogenesis, shown by the increased insulin levels and increased blood glucose levels.

HbA1c is a standard test for the measure of glycemic status in diabetic patients. As the blood level increases, HbA1c levels also increase. i.e, It directly correlates with the glycemic control of the patient for the last 2-3 months. In C allele patients, HbA1c levels were significantly elevated due to constant liver gluconeogenesis, since metformin transport to the liver is defective in these patients. Correspondingly, there is increased post prandial blood sugar which elevates HbA1c, showing the possible association of OCT1 polymorphism with poor metformin action and glycemic control.

In diabetic patients, the LDL and total cholesterol levels are increased because of insulin deficiency or insulin resistance as insulin acts to lower total and LDL cholesterol by stimulating insulin dependent lipase in the adipocytes. The total cholesterol and LDL values are significantly higher in C allele. The BMI of C allele patients is significantly increased (p<0.05). This study shows that since metformin efficacy is reduced in C allele patients, the insulin release increases and the peripheral resistance to insulin increases, leading to reduced hypolipidemic activity of insulin. This   could explain for the raised total cholesterol and LDL-c fractions seen in the C allele subjects.

Among 60 subjects 18 had OCT1 polymorphism in the C allele (11%). ie, 18 subjects who had C allele, showed decreased absorption of Metformin by liver from blood. So this group had elevated blood metformin levels.

TABLE 4: FREQUENCY OF EXPRESSION OF POLYMORPHISM

In the present study, the serum Metformin levels in C allele patients were significantly increased. Fasting plasma glucose and serum Insulin were also found to have increased in these subjects (p < 0.05). 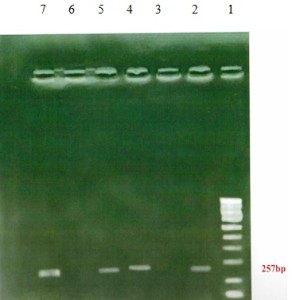 CONCLUSION: In summary, we demonstrated that the common SLC22A1 rs122083571 C/T (Arginine 61 Cys variant) significantly alters uptake of endogenous compounds and drugs. Those subjects with T allele had better response to Metformin therapy and had better glycemic status when compared to that of the C allele. In those subjects with C allele, the Metformin levels were increased probably due to poor transport of metformin to its sites, resulting in elevated fasting plasma glucose, insulin, HbA1c, total cholesterol, LDL levels.

Metformin could not exert any of its antidiabetic properties in those subjects probably due to its poor transport into the cells, which might have occurred due to the genetic polymorphism in the OCT1 transporter protein. This study provides evidence to the fact that snp in the SLC22A1 rs122083571 C allele is associated with the poor glycemic status.

ACKNOWLEDGEMENT: We thank the study participants. The study was not supported by any grant. We sincerely thank all the student workers who have supported us for this study, by collecting samples.