ABSTRACT: The quest for eternal health has made mankind to intensively research the nature itself. Nature has a rich source of medicinal plants, the proper use of which is necessary to maintain health. According to WHO, almost 80% of the population of developing countries has utmost faith in traditional medicines, of which plants are the important source. WHO recommends macroscopic and microscopic studies of the herb should be the first step in authentication, which is necessary to ensure the quality of any medicinal product. Cyperus rotundus (L.), a medicinal plant belonging to the family of the Cyperaceae, grows all over India. In the present study macroscopic and microscopic characterization of the rhizomes of Mustawas done to develop an atlas of diagnostic characters by the standard methodology of macro-microscopic characterization of herbal raw drugs. Macroscopical and organoleptic characters as well as the microscopic features of Musta rhizomes were documented.  A self-explanatory atlas of photomicrographs was prepared to aid rapid identification of raw drug called Musta. The atlas will serve as standard reference for identification and distinguishing Musta from its substitutes and adulterants.

INTRODUCTION: The quest for eternal health has made mankind to intensively research the nature itself.  Though the medicines obtained from medicinal plants are effective in various ailments the standardization of drugs remains an uphill task. Authentication should be the primary criteria of any research using plants, which will help to ensure the quality of any medicinal product 1.

Pharmacognostic characters of herbs play an important role since particular macro-microscopic features are unique for each plant. WHO recommends macroscopic and microscopic studies of the herbs should be the first step to identify the botanical source before doing any research on plants 2.

Cyperus rotundus, commonly called Musta is a medicinal plant belonging to the family of the Cyperaceae. It grows all over India up to 2000 meters altitude, especially on the banks of streams, rivers. It appears among Indian, Chinese and Japanese natural drugs used as home remedy 3.

This plant grows well in tropical, subtropical and temperate regions 4 and it is an invasive weed which significantly reduces the crop yield 5-6.

In Indian system of medicine, its rhizomes are used in the treatment of several clinical conditions like candidiasis 7, diabetes 8, diarrhea 9, malaria 10, dysmenorrhea and menstrual irregularities 11.

It is also known for its cytoprotective 12, anti-mutagenic 13, antioxidant 14, anti-inflammatory, anti-pyretic and analgesic 15 properties. Even though the rhizome of this plant has got tremendous medicinal properties, there is very minimum information on proper identification of the same. The present communication deals with the detailed macroscopic and microscopic features of the rhizome of C. rotundus as whole rhizomes as well as powdered form.

MATERIALS AND METHODS: The dried rhizomes of C. rotundus were collected from the local Ayurvedic pharmacy in Mangalore. The specimen (No.11110101) is being stored in the Pharmacognosy Department of SDM Centre for Research in Ayurveda and Allied Sciences, Laxminarayana Nagar, Kuthpady, Udupi for future reference. The dried rhizomes were cleaned, coarsely powdered and preserved in air tight container for further studies. Dried whole rhizomes were used to study the external appearance, color, odor and taste. Coarse and fine powders are also prepared to record the organoleptic characters 16.

Few fully matured rhizomes were preserved in fixative solution FAA (Formalin-5ml + Acetic acid-5ml + 70% Ethyl alcohol-90ml) for more than 48 hours. The preserved specimens were cut into thin transverse section using sharp blade 17. The sections were stained with safranine as per standard methodology 18. The selected diagnostic characters of the transverse section were photographed under suitable magnification using camera (Zeiss AxioCam ERc 5s) attached to trinocular microscope (Zeiss Axio Lab.A1) and the micro-measurements were taken using the pre-calibrated scale available in the software (AxioVision Rel. 4.8). A pinch of powder was warmed with drops of chloral hydrate on a microscopic slide and mounted in glycerin. Slides observed under microscope and diagnostic characters were observed and photographed using Zeiss AXIO trinocular microscope 19.

Macroscopy: C. rotundus rhizomes are bluntly conical with number of wiry and tough slender roots, often attached to one another by a thin and tough connective. Each rhizome is tumicate, varies in size and thickness, crowned with remains of stem and leaves forming a hairy to scaly covering.

The length of the rhizome is 1.5 to 3cms and diameter is 0.8 to 1.6 cms. Its stolons are elongated and about 1.5 to 3.5cms long. Externally the rhizome is dark brown or black in color and internally creamish yellow; odor- fragrant, taste- slightly pungent (Figure 1A). Fracture tough, mealy, shows dots of stelar vascular bundles and a distinct endodermal margin (Figure 1B). Coarse and fine powders are coffee brown in color, slightly pungent in taste, odor fragrant (Figure 1C-D). 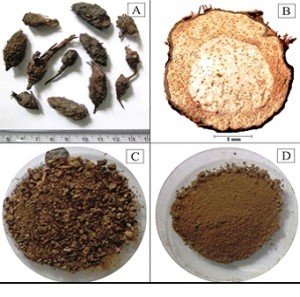 Microscopy:Transversely cut surface of rhizome shows a line of demarcation of endodermis separating cortical portion from the central ground tissue. Few remnants of scale leaves are seen at the few places of the periphery (Fig. 1B). Detailed transverse section  of  rhizome shows single layered epidermis with brown colored pigment, often peeling off during maturity, leaving behind 2-6 layers of suberized sclerenchymatous cap-like patches filled with brown pigment; epidermis and outer sclerenchymatous layers are followed by 4 to 6 layers of radially elongated thick-walled cork-like cells which ends in compact outermost cortical parenchyma cells with no intercellular spaces; ground tissue of cortex consists of circular to oval, thin-walled, parenchymatous cells with small intercellular spaces; endoderm is distinct surrounding the wide central zone beneath endodermis, the stelar region is composed of circular to oval, thin-walled, parenchymatous cells with intercellular spaces, numerous collateral, closed, vascular bundles surrounded by bundle sheath of fibres, scattered in this region; vessels spiral to simple pitted; simple round, oval to elongated starch grains, a number of pigmented cells filled with reddish-brown oleo-resin content, present throughout the cortex and stele (Figure 2). 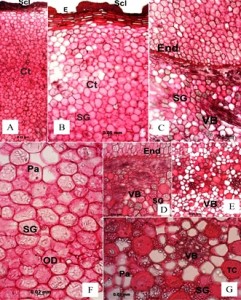 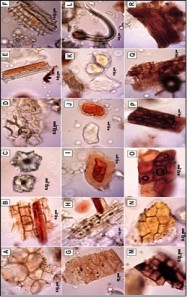 CONCLUSION: In the present study, we analyzed   the macroscopic and microscopic characters of the dried rhizomes of C. rotundus. The results obtained will help to identify the correct species since no such detailed photographic atlas is available for exact picture of the characteristics.

This study will serve as a reference for identification and distinguishing rhizomes of Cyperus sp commercially available and to differentiate them from their substitute and adulterants.  Detailed study on chemical analysis will be essential to acquire significant results.

ACKNOWLEDGEMENT: The authors are grateful to Yenepoya University for giving permission to carry out this study. Authors thank Dr. B. Ravishankar, SDM Centre for Research in Ayurveda and Allied Sciences for providing the facilities, Miss Sangeetha and Miss Rajalekshmi for help in carrying out the studies.