ABSTRACT: Comparative DFT calculations have been studied for Paracetamol (PA) and its analog Phenacetin (PH) to verify their electronic resemblance. DFT studies concluded that PA and PH have the lower energy predominant trans conformers with respect the cis-conformers. From TD-DFT studies, the electronic transition energies between the ground state and singlet excited states for the two conformers have been done. The metabolized product of PA or PH, i.e., m-PA in the liver of the human being is N-acetylimidoquinone. The electron affinity, Ea, of metabolized Paracetamol (m-PA) is sufficient to interact with the nucleic acid bases in the liver. So long as the m-PA product is produced in the liver and the electron transfer energy, Eet, between m-PA and nucleic acid bases has very small energy value with guanine, i.e., 0.382 eV, from the nucleus of the cell in the liver producing a spontaneous electron transfer from the nucleus to m-PA producing cationic nucleus leading to the carcinogenic behavior of the cell in the liver. The presence of glutathione in the liver prevents the formation of m-PA via proton transfer, avoiding the carcinogenic effect of PA and PH. Repetitive usage of PA or PH drug consumes the glutathione in the liver, permitting the interaction between m-PA and guanine in the liver. Addition of N-acetylcysteine (NAC), N-acetylmethionine (NAM) or N-acetylglucoseamine (NAGA) prevents the formation of m-PA, i.e., cancer effect. Therefore PA and PH can be used as safe drugs after mixing with the pharmacological dose of N-acetylcysteine, N-acetylmethionine or N-Acetylglucoseamine.

INTRODUCTION: Paracetamol instead of Phenacetin is worldwide use as anal­gesic, and antipyretic drug 1 not as anti-inflammatory and literature including 93 references reported the clinical side effects of Paracetamol in terms of the following system processes: allergic and skin; hematol; renal diseases; pregnant lactation; cancer effect 2. Availability effect of EtOH with PA was studied by Wojcicki et al., 3 in healthy man.

Goto et al., had studied the charge transfer energy values for some pyridines and pyrimidines by CNDO/2 4.

Charge transfer complex formation between nucleic acid bases and isoproterenol has been studied using UV spectrophotometer measurement by Taha et al. 5 Tautomeric structures of uracil and its electrochemical corrosion behavior of mild steel in the acidic medium were studied using CNDO calculations by Makhlouf and El-Shahawy 6. The interaction of hydrogen bonding studies in drug-receptor has been performed by Ghafourian et al. 7 Severe hepatotoxicity and nephrotoxicity as a reason for the accumulation of toxic metabolites of Paracetamol were studied by Moffat 8. The CT-complex formation between cytoseine, thymine adenine, and uracil with catechol in acidic medium has been studied by Al-Obeidi et al. 9 The formation of charge transfer complex between oxytetracycline and tetracycline with purines, pyrimidines, and amino acids was studied by Lahiri 10. El-Shahawy et al., have studied the formation of CT- complex between 4, 4'-dimethoxydiquinone with uracil using CNDO calculations 11. Paracetamol toxicity is manifested primarily in the liver. Hepatic damage from PA can be treated with N-Acetylcysteine (NAC) if started within 10 h from ingestion 12.

The rheumatism therapy has been known since many years ago with the usage of extracts of plants such as willow bark or leaves, most of which contain salicylates. Bayer Company in Germany made the acetylsalicylate form salicylic acid in 1897. This drug has been named ‘‘Aspirin’’ and became the most worldwide use medicine of all time. In 1971, Vane found out the mechanism by which aspirin makes its anti-inflammatory, analgesic and antipyretic effects

He proved that aspirin and other non-steroid anti-inflammatory drugs (NSAIDs) prevent the enzyme activity which is now called cyclooxygenase (COX) producing prostaglandins (PGs) that cause inflammation, swelling, pain, and fever. However, by inhibiting this key enzyme in PG synthesis, the aspirin-like drugs also prevented the production of physiologically important PGs which save the mucosa of the stomach from damage by HCl.

This conclusion provided an explanation for the therapeutic actions and accompanied side effects of the aspirin-like drugs. Twenty years later, with the discovery of a second COX gene, it was clear that there are two forms of the COX enzyme. The constitutive form, COX-1 which supports the beneficial homeostatic functions, whereas the second inducible form, COX-2, is unregulated by inflammatory mediators and its products lead to many of the symptoms of inflammatory diseases such as rheumatoid and osteoarthritis 13.

Instrumentation: The UV-visible spectra of some of the studied compounds had been scanned by UV-2101 PC UV-vis scanning spectrophotometer Shimadzu.

The temperature effect on the PA spectrum has been scanned by Perkin Elmer Lambda 35 UV/V is spectrophotometer USA.

Computational Studies: Computational study on an isolated gaseous molecule was done by the aid of DFT-method. Minimizing structures energies have been achieved using B3LYP with 6-31**G basis set.

Calculations were performed on the minimum energy structures using the closed shell Hartree-Fock, Becke's three parameters density functional theory, DFT, 14 in combination with the Lee, Yang and Parr correlation functional B3LYP 15 with basis set 6-31**G. The differentiation between the conformers' cis and trans was based on the total energy difference which has been calculated via SCF using RHF for these types of molecules and UHF for the molecular ions (cations and anions).

With respect to DFT calculations, it has been performed as B3LYP/6-31**G and the energy of the density function theory can be represented as follows 16, 17.

Where is the electron density.

Where Ci is the eigenvectors and

Where is the Hamiltonian of the total energy.

Electron Transfer Studies: The electron transfer energy in the CT–complex between the donor and the acceptor (cation and anion) was calculated according to the following equation 18.

Where Zi and Zj are the charge densities and rij is the distance between two atoms in the molecule of N atoms. The ET-band position in nm can be obtained by dividing 1240.824 by the electron transfer energy in electron volts.

Conformational Studies: Also, it is necessary to compare the conformers of PA with its analog PH. The cis-conformer is the structure in which the amino hydrogen atom and the carbonyl group are on the same side.

TE is the total energy in au unit.

Ip is the ionization energy in eV unit.

Ea is the electron affinity in eV unit

The trans-conformer is the structure in which the amino hydrogen atom and the carbonyl group are in opposite sides, Fig. 1. 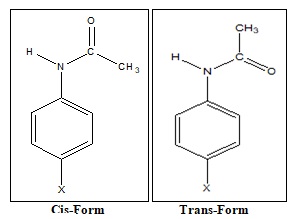 Δ E is the energy difference between the two conformers.

N/No is the ratio between the two conformers.

N is the number of the cis-conformer molecules of the higher energy in one mole.

From the previous Table 2, it is clear that the trans-conformer has the lower energy in PA as the situation in PH molecules abundance. The energy difference between the two conformers is a fraction of electron volt; therefore their abundance is probably in the normal temperature, especially the transforms.

Regarding the existence of the two conformers in the room temperature in solutions 20, it is probable to change the temperature of the UV-spectra of PA solution in ethyl alcohol, Fig. 2, to find out duplicity relative intensity change in the UV-band at different temperatures.

In realty, there isn’t observable duplicity at the top of the UV-band of PA, and hence there isn’t any change in the relative intensity change indicating to the absence of the conformers. Using TD-DFT calculations, the electronic spectra have been studied for both conformers cis and trans, to find out the electronic transitions between the ground state and the excited singlet states as follows in the following Table 3 and 4.

TABLE 3: ELECTRONIC TRANSITION ENERGIES BETWEEN THE GROUND STATE AND THE SINGLET EXCITED STATES OF TRANS-PARACETAMOL

TABLE 4: ELECTRONIC TRANSITION ENERGIES BETWEEN THE GROUND STATE AND THE SINGLET EXCITED STATES OF CIS-PARACETAMOL

f is the oscillator strength.

From the previous Table 3 and 4, it is clear that the allowed transition energies for cis and trans conformers lie at 254nm and 267nm respectively which they are very near to each other, then the expected duplicity can’t be observed by the temperature effect at 248 nm in the UV spectrum in ethyl alcohol 21 as shown in the following Fig. 2.

The experimental λ max of Paracetamol lies at 261 nm in chloroform solvent21 over broadband including the λ max at positions 254 nm and 267 nm for cis and trans conformers respectively. 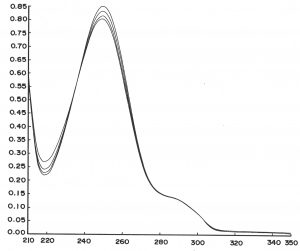 Electron Transfer Studies: PA and PH are metabolized primarily in the liver 22-24, into toxic and non-toxic products Fig. 3, 4, and 9. Three metabolic pathways are notable, Fig. 4, and 9. The hepatic enzyme system metabolizes Paracetamol, producing the toxic product as N-acetylimidoquinone, which has the symbol (m-PA) for simplicity, Fig. 4.

All three pathways yield final products that are inactive, non-toxic, and eventually excreted by the kidneys. The intermediate product m-PA is also produced via the metabolism of PH in the liver, Fig. 3 and 4. This means that m-PA is primarily responsible for the toxic effects of PA and PH. Then it is interesting to use quantum mechanical DFT (B3LYP/6-31**G) calculations to study the interaction between this product, m-PA, and the nucleic acid bases in the nucleus in the liver cell. 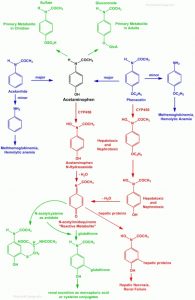 FIG. 4: SCHEME OF METABOLISM OF PA AND pH TO FORM m PA 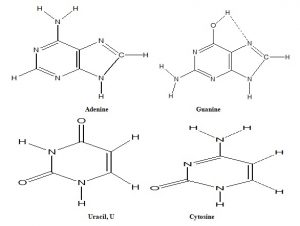 TABLE 5: THE COLUMBIC POTENTIAL ENERGIES (C= C+ + C-) of PA, PH, and m-PA WITH THE NUCLEIC ACID BASES IN eV 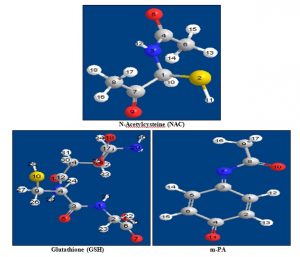 FIG. 6: THE OPTIMIZED STRUCTURES OF NAC, GSH, AND m-PA.

TABLE 8: THE CHARGE DENSITIES OF THE FREE RADICALS OF NAC AND m-PA 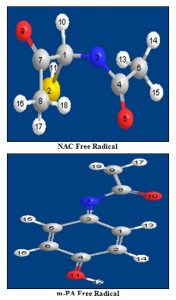 FIG. 7: THE MINIMUM ENERGY STRUCTURES OF THE FREE RADICALS OF NAC AND m-PA 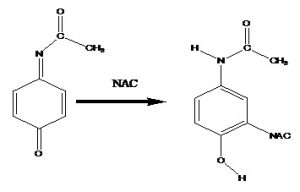 FIG. 8: THE INTERACTION BETWEEN m-PA AND NAC

June 2009, an FDA advisory committee recommended that new restrictions should be placed on Paracetamol usage in the United States to help protect people from the potential toxic effects. The maximum dosage to be consumed at any given time would be decreased from 1000 mg to 650 mg, while combinations of Paracetamol and narcotic analgesics would be prohibited. Committee members were particularly concerned by the fact that the present maximum dosages of Paracetamol had been shown to produce alterations in hepatic function. The FDA has not implemented its recommendations as of October 2010.

TABLE 8: THE CHARGE DENSITIES OF THE FREE RADICALS OF NAC AND m-PA 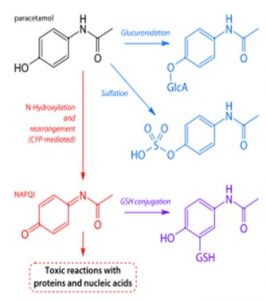 FIG. 9: THE THREE PATHWAYS OF PARACETAMOL IN THE LIVER

TABLE 9: DFT/6-31G**.CHARGE DENSITIES OF THE N-ACETYLMETHIONINE AND N-ACETYLGLUCOSAMINE WITH RESPECT TO N-ACETYLCYSTEINE

N-Acetylglucosamine (NAGA) has higher charge density, 0.528768, Table 9, in the amino-hydrogen atom at position 24, Fig. 10, therefore it is expected that NAGA is more efficient to remove the carcinogenic effect of Paracetamol than NAC and NAM from the charge density point of view.

From Table 10, it is obvious that the studied molecules (NAC, NAM, and NAGA) and their free radicals, Fig. 11, have small comparative Ea and Ip values with respect to those of nucleic acid bases, therefore, there is not apprehension to make an electron transfer with them, Table 1. From Table 10, it clear that the energy barrier E between NAM molecule and its free radical (F.R.), Fig. 11, has the lowest value, 18.89 eV.

This means the alteration of the NAM molecule is easier to be free radicals which combine with N-Acetyliminoquinone (m-PA) to remove its quinoide structure. Hence the removal of m-PA means the removal of the carcinogenic effect of Paracetamol drug. 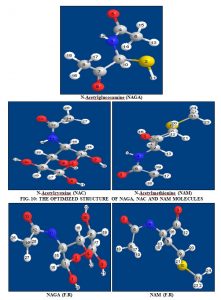 CONCLUSION: Paracetamol and Phenacetin as drugs are safe from the cancer effect in the presence of N-acetylcysteine, N-acetylmethionine, or N-Acetylglugosamine.