ABSTRACT: Non-nucleoside reverse transcriptase inhibitors (NNRTIs) in addition with Nucleoside reverse transcriptase inhibitors (NRTIs) and protease inhibitors (PIs) used in the treatment of HIV-1 infection. Non-nucleoside reverse transcriptase inhibitors (NNRTIs) gained exact place in the treatment of HIV-1 infections. Starting from the HEPT and TIBO derivatives, different classes of compounds have been identified as NNRTIs, that is compounds that are specifically inhibitory to HIV-1 replication and targeted at the HIV-1 reverse transcriptase (RT). Two NNRTIs (nevirapine and delavirdine) have been formally licensed for clinical use and several others are (or have been) in preclinical and: or clinical development [tivirapine (TIBO R-86183), loviride (a-APA R89439), thiocarboxanilide UC-781, HEPT derivative MKC-442, quinoxaline HBY 097, DMP 266 (efavirenz), PETT derivatives (trovirdine, PETT-4, PETT-5) and the dichlorophenylthio (pyridyl) imidazole derivative [S-1153]. Several compounds acting as Reverse transcriptase inhibitors was proved to be highly valuable against HIV-1 replication with minimal toxicity. NNRTIs interact with a specific ‘pocket’ site of HIV-1 RT and thus inhibiting the translocation and further elongation of DNA strand. The major drawbacks of NNRTIs are their resistance and pharmacokinetic problems.HIV is no exception as it is a retrovirus, which means that it has capacity to insert its genetic material into the host cells and infect it.  In this review, we focus on the several moiety used against HIV-1 infection.

INTRODUCTION: Human immunodeficiency virus was found to be a causative agent for development of AIDS 1. Human immunodeficiency virus, also called retrovirus, has two subtypes i.e. HIV-1 (occurs worldwide) and HIV-2 (found mainly in Africa), consist of a single stranded RNA genome which is converted into double stranded DNA. This conversion occurs in the cytoplasm of newly HIV infected cell in the presence of a viral enzyme named as reverse transcriptase.

Through X-Ray crystallographic analysis inhibitor action of NNRTIs on HIV-1 mainly three mechanisms have given– 1. Esnouf et al proposed that NNRTIs change the conformation of DNA polymerase active site to an inactive site, thus inhibit DNA polymerase 2. Hsiou et al proposed that NNRTIs deform the structural element of polymerase active site that consist of the “Primer grip” which is a region of reverse transcriptase that is involved in the precise positioning of primer DNA strand. This deformation of primer grip may change the position of Template/Primer (T/P) substrate 3. Kohlstaedit et al observed that NNRTI-binding pocket act as a joint between palm and thumb, and movement of thumb help in translocation of Template/Primer. NNRTIs bind and inhibit the movement of thumb domain thus preventing the translocation and further elongation of DNA strand 5-7. 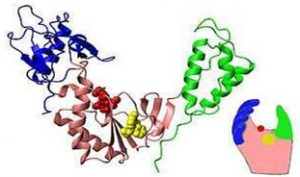 FIG.1: THIS RIBBON REPRESENTATION OF RT ACTIVE DOMAIN (i.e P66 SUBUNIT) DESCRIBES ITS HAND- LIKE STRUCTURE, SHOWING FINGERS (BLUE), PALM (PINK), AND THUMB (GREEN). THE ACTIVE SITE (RED ATOMS), WHERE DNA IS ELONGATED, IS IN THE PALM REGION. ALSO SHOWS IN AN NNRTI DRUG (YELLOW) IN THE POCKET WHERE IT BINDS.

Chemistry of NNRTIs: For producing a large number of physiologically active compounds, the significance of heterocyclic and bicyclic compounds as intermediates have been reviewed by Avila and Jeyaraman 8. In therapy of HIV infections NNRTIs, the class of anti-reverse transcriptase inhibitors, are significantly used. The epoch of NNRTIs began about a decade with the identification of two classes of compounds i.e. 1-(2-hydroxyethoxymethyl)-6-(phenylthio)thymine [HEPT] (a) (Baba et al., 1989, Miyasaka et al., 1989) and tetrahydroimidazo[4,5,1-jkj] [1,4] benzodiazepin– 2(1H)-one and-thione[TIBO] (b) (Pauwels et al., 1990, Debyser et al., 1991) which have specific HIV-1 reverse transcriptase inhibitors activity (Pauwels et al., 1990, Baba et al., 1991a,b, Debyser et al., 1991).

Recently, it has been shown that 4-thiazolidinonederivatives have become a promising area of research because a large no. of activities such as- anticancer activity on leukemia (blood-cancer), ovarian, renal, breast cancer, CNS, colon, lung, melanoma are found in this nucleus. The growth on this scaffold from time-to-time have been reviewed by various researchers such as Newkome et al. in 1977 9, Singh et al. in 1981 10, Abdel-Rahman et al. in 2001 11, Verma et al. in 2008 12, Hamama et al. in 2008 13 and Jain et al. in 2012 14.

The continuous/discontinuous use of NNRTIs in AIDS patients finally cause resistance of virus strains against the drug. So, it is promising to discover new chemical molecule with a broad-spectrum activity against viral reverse transcriptase enzymes 15.

The term first generation NNRTIs related to nevirapine (c) and delavirdine (d) is strongly established in the literature, and the term second generation NNRTIs has an improved activity spectrm against the most common NNRTI – resistant HIV variants. Recently approved NNRTI is efavirenz which shows activity against various NNRTI mutants 16, 17. Various new NNRTIs, which have various potencies, have been depicted 18-20. Some of them such as emivirine (e) also called MKC-442 21, HBYO97 22 (f), Calanolide A 23 (g), the phenylethylthiazolythiourea (PETT) derivatives also called MIV-150 24 and the quinazolinone derivatives also called DPC083 and DPC961 25 are undergoing to various clinical phases. But due to toxicity, unfavourable pharmacokinetic activities, poor in-vivo efficacy and potency against NNRTI-resistant viruses, most of these drugs has been removed. The thiocarboxanilide (h) also known as UC781 is still in progress due to potent microbicidal activity 26. 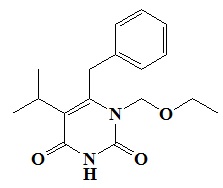 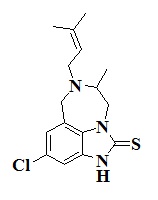 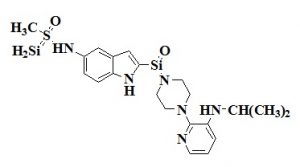 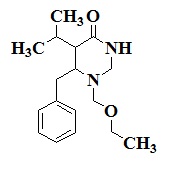 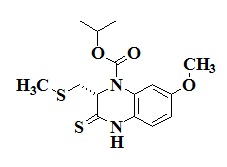 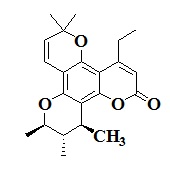 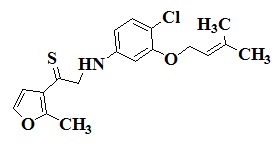 Antiviral activity: Uncontrolled viral replication in CD4++T cells cause HIV-1 disease 27. In this situation, for synthesizing inhibitors, HIV-1 RT has been identified as a prime target for treatment of HIV/AIDS 28, 29.

Thiazolidinone derivative: Several 2,3-diaryl-1,3-thiazolidin-4-ones have reported to beparticularly effective non-nucleoside HIV reverse transcriptase inhibitors (NNRTIs) 30. A number of thiazolidin-4-one having adamantine moiety at position-2 and another substituent at N-atom of ring have been synthesized such as (±) -2- adamantan-1-yl-3-(4,6-dimethyl-pyridin-2-yl)-thiazolidin-4-one showed modest anti HIV activity. Adamantine moiety have capable to provide antiviral activity. A new series of thiazolidinone compound having an adamantly moiety at 3rd position also exhibit anti HIV activity as well as cytostatic activity 31.

Monforte et al. synthesized N-1-aryl-benzimidazoles 2-substituted analogs and screened them as novel HIV-1 nonnucleosidereverse transcriptase inhibitors (NNRTIs). Some of thecompounds were effective in inhibiting the replication of humanimmunodeficiency virus (HIV) at nanomolarconcentration and alsopossessed low cytotoxicity. Among the series, compounds 13 and14 surfaced out as the most promising candidates having potentactivity and as well as no toxicity 33. 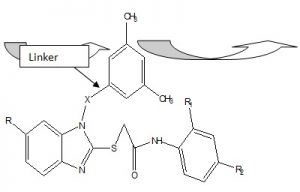 Thiocarboxanilide derivatives: The selective anti-HIV-1 activity of oxathin (thio) carboxanilides was given in 1991 34. These drugs are represented as second generation NNRTIs. The lead compound of this class is designated UC-84 (39), contains an oxathiin moiety connect by a carboxamide group to the isopropyl ester of 2-chlorobenzoic acid. These compounds have EC50 values from 0.015 to 0.07 lM against the mutant virus strains 35. The first NNRTIs having strong binding in the NNIBP, which is an important feature for NNRTIs use as microbicides. NNRTIs are in general having hydrophobic nature and should readily cross membranes such as the HIV envelope. The hydrophobic nature of this compound would allow inflow and outflow of the NNRTIs from the virion. The hydrophobic UC781 penetrate by the virion membrane envelope and capsid core would allow binding to RT. The tight-binding property of the compound lowest the dissociation of the NNRTI from RT, and grabbing the NNRTI within the virion particle shows a prolonged inhibition of RT activity. 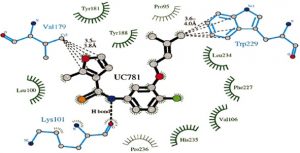 2-Aminopyrimidines derivative: The development of pyrimidines as NNRTIs was the effect of 18years of research of its protype4,5,6,7-tetrahydro-5-methylimidazo[4,5,1-jk] [1,4] benzo diazepin-2(1H)-ones (TIBO) (b), derivative 37. The structure-based lead discovery started with this find. This group of non nucleoside RT inhibitors (NNRTI’s) interferes with the function of viral polymerase through interaction at a common “allosteric” binding site which is in close proximity to the catalytic site of DNA synthesis.

Imidazole derivative: A series of imidazole were synthesized with the aim to develop novel imidazole analogue with broad spectrum anti HIV activity 38. Imidazole have been known as antiviral drug, one of the example being capravirine. Capravirine was one of the most promising NNRTI because it has a favorable profile to many drug resistance mutations 39. The use of Capravirine has newlybeen prohibited due to vasculitis (an inflammation of the blood vessels) in animals that taken high doses of Capravirine 40. In, the synthesis of novel Capravirineanalogues was achieved by synthesis of 2-(aminocarbonylmethylthio)-1H-imidazoles and they were tested for their biological activity against HIV-1.

Arylazolylthioacetanilide derivative: Currently, arylazolylthioacetanilides, a particular series of five membered heterocyclic derivatives, given more attention to the discovery of new NNRTIs because it having more potency against wild-type and resistant HIV-1 strains, maximum bioavailability and low toxicity 41-48. The newly synthesized imidazopyridinylthioacetanilide derivatives were tested for anti-HIV activity by determining their ability to inhibit the replication of the HIV-1 IIIB strain, HIV-1 mutant strain RES056 (K103 N/Y181C double RT mutant), and HIV-2 ROD strain in MT-4 cells in comparison with other NNRTs such as nevirapine, delaverdine etc.

CONCLUSION: Concerted efforts are being made worldwide by medicinal chemists, biologists and clinicians to wipe out most advanced HIV strains. The combination therapy to date involving synthetic drugs has been successful for partial cure of patients ailing from AIDS.  Although extensive efforts have been made in developing efficient molecules for the management of AIDS, search is still on as the virus undergoes rapid mutation making the existing drugs active only for a short span. A variety of anti-HIV agents with diverse chemical structures are presented in this review and these have shown heartening activities but with some drawbacks or the other.

The present review summarises recent advances made in anti-HIV/AIDS research.

CONFLICT OF INTREST: Authors declare no conflict of interest.